Metal Tales: Overkill is a heavy metal themed twin-stick shooter with roguelite elements and it comes to us from Madrid-based coders/publishers Zerouno Games.  As the name suggests, this game puts the music front and centre, placing you (and some offline co-op buddies) as a guitarist looking to reclaim the world from some possessed guitar gods.

Seen from above, you control the action with a standard twin-stick shooting control scheme.  Oddly, the face buttons on the joypad can be used to shoot in the four main directions (eight if you combine them) but you get full 360 degree aiming with the right stick so you don’t need them.  One nice touch is that you can choose to ‘aim to shoot’ from the options menu which is great as it means you don’t have to hold down 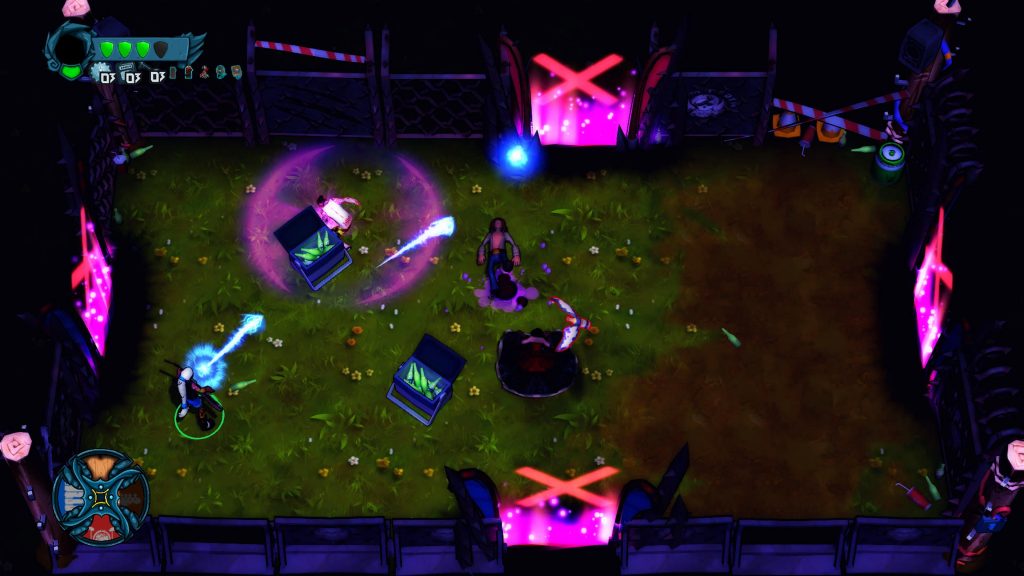 is mapped to a not very useful ‘powerslide’ which is just a slow dodge move,

drops a not very useful bomb and

activates guitar string power-ups.  More on that later.  But for the most time you’ll just be running around with the left stick and aiming/shooting with the right which is absolutely fine.

After a quick opening cutscene (animated with English text but voiced over in Spanish), you’ll be in amongst the action.   There are eight levels, each of which features a randomly generated layout of individual rooms (usually less than ten).  In these rooms you’ll find enemies (usually possessed music fans, roadies, other guitarists and weird mutant things), loot, traps and an end of level boss.  So you’ll just be looking to clear these out methodically but if you do see the boss room early on, you can go straight through to that if you want but, as with most roguelikes/lites, you’ll be better served searching the levels to get new gear and earn money that you can spend in shops. 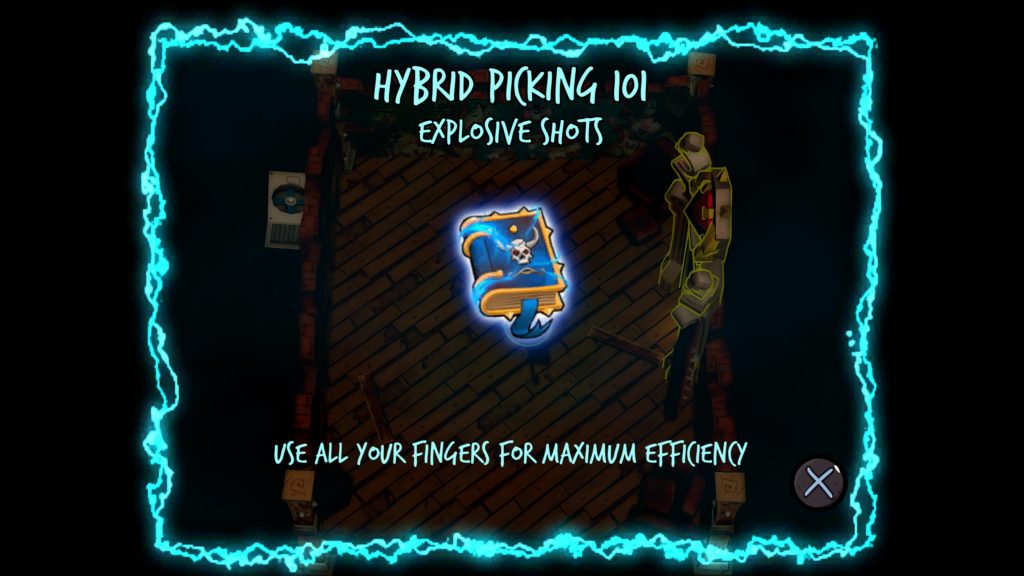 The main action is just your usual run and gun twin-stick fare (like Smash TV but not nearly as hectic) and the boss battles are what you’d expect too with bigger enemies speeding around the screen, shooting lots of firepower at you until you figure out their patterns and dispose of them.  Doing that will unlock a band member who you can summon using the d-pad (with a lengthy cooldown).

Metal Tales doesn’t do anything new (we’ve even seen metal used as the inspiration for lots of different games in the past also) so what you’re looking for is for it to do the shooty stuff well, give you good upgrades to foster some degree of addictiveness and to hold together well technically and that’s really all of a mixed bag here.  The shooting is okay.  Like we said, it’s not as hectic as a Smash TV but it also lacks the slick dodging of a Nex Machina or Enter the Gungeon either.  Any difficulty just tends to come from a lack of space to maneuver and from enemies taking a bit more damage than perhaps they should.  Of course the latter does get mitigated a bit thanks to power-ups and post-game upgrading.  It’s all okay but it’s not super exciting either (also, a lack of vibration makes you feel a little less connected to the action). 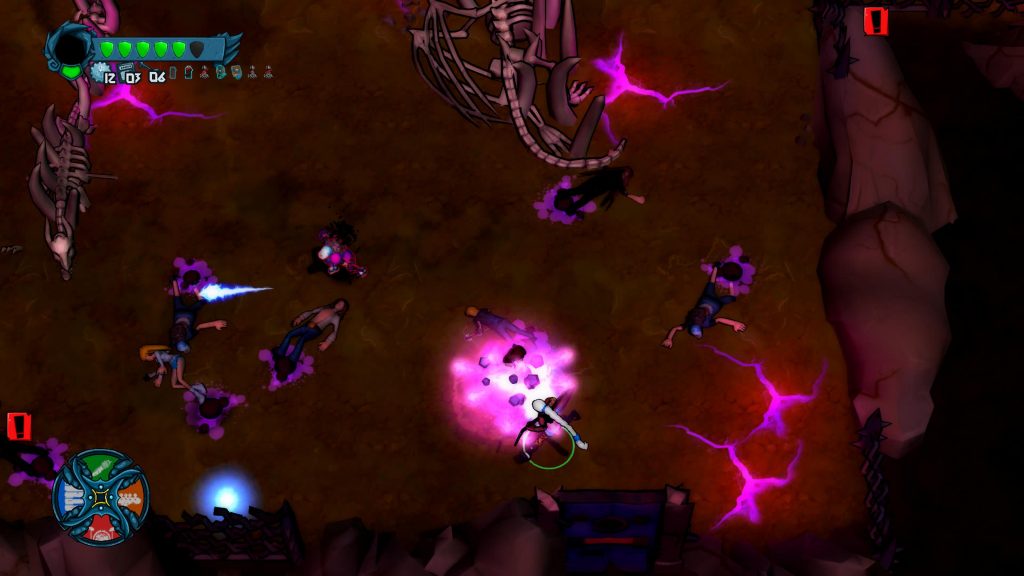 When it comes to the upgrade stuff, things get pretty strange.  You find new guitars along the way and these are essentially your primary weapon.  You’ll also find guitar strings that give you different abilities of which sometimes they’ll give you a different type of damage.  However, a lot of the time we couldn’t really tell the difference once these were equipped.  In fact, the only time we could was when a guitar gave us significantly worse firepower or range.  Otherwise we just weren’t sure.  There are no stat indicators on any of this stuff which makes it very hard to know what to pick up or buy in the in game shop.

When you die you can spend money on permanent upgrades.  These work a bit better when they do something obvious (such as giving you more speed or damage) but they also add new guitars and strings to the random loot drops in the game.  Again, they aren’t really explained and trying them out doesn’t always clear things up. 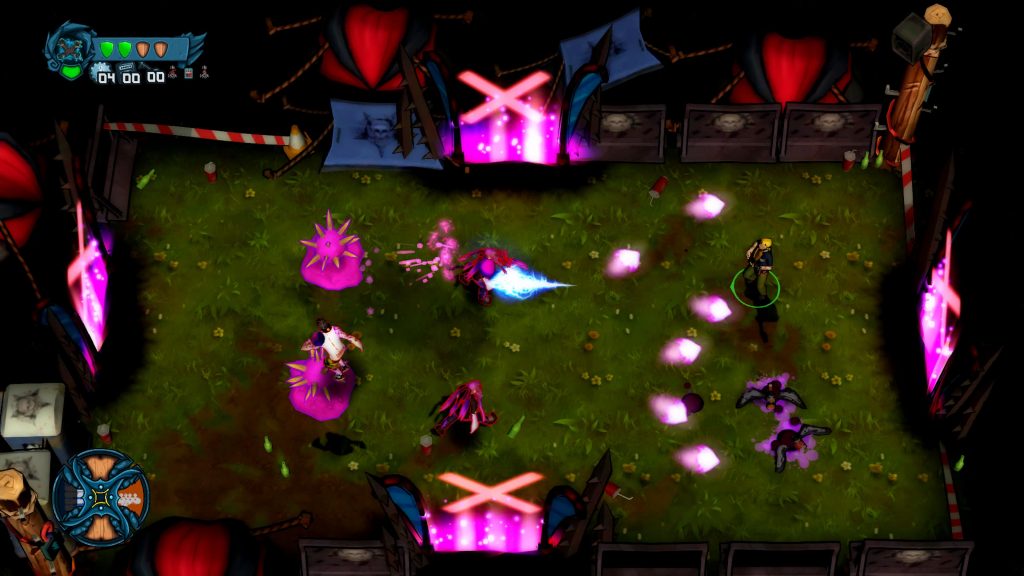 However, there’s a major fault with the game in this area.  We were generally getting to the third level before dying but then we picked up an upgrade (not sure which one) and that made the rest of the game entirely trivial, allowing us to one-shot regular enemies and take out bosses with just a hit or two also.  That took us right to the end credits which is, of course, not how the gradual improvements in a roguelite are meant to work.  Imagine finding an early game item in Rogue Legacy that just allowed you to boss the whole game.

That takes us onto the technical side of the game and it’s here where Metal Tales really struggles.  The game has been out for over two weeks now and while we’re sure these issues will get patched out eventually, they’re really bad ranging from strange bugs where our aiming just went completely awry to bits of screen information getting stuck on the screen (or disappearing).  Then we had the issue above where we were able to complete the game super easily.  But after that we started a new run and none of the buttons seemed to work.  We couldn’t move, we couldn’t shoot. 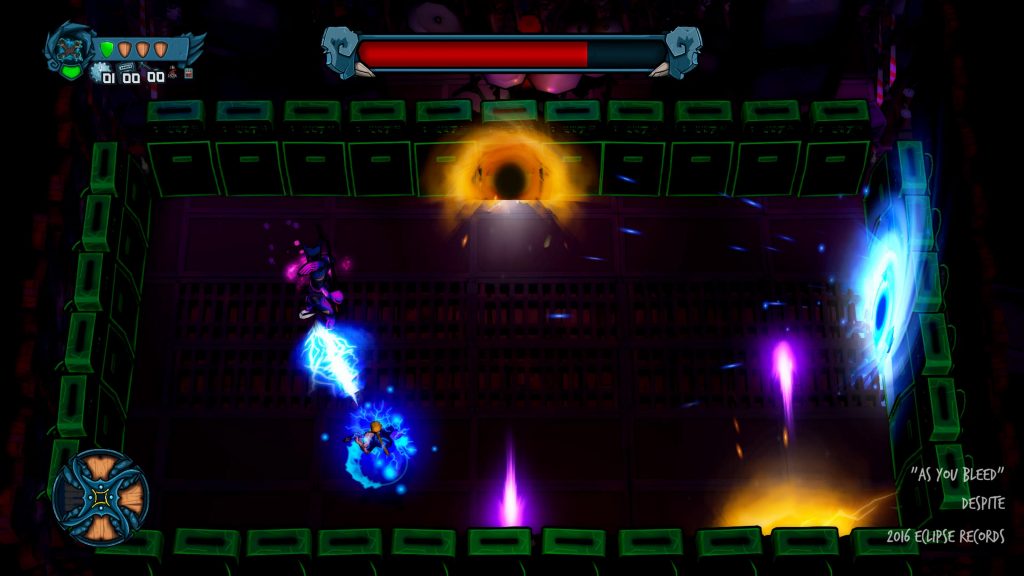 So, we did what you do.  Closed the game, restarted it and began a new run.  The problem was still there.  We can tolerate some bugs but not ones that literally kill the game unless you delete your saves (exactly what you don’t want from a roguelite where progression and upgrades are everything).  And so that’s where we are now.  We’re not prepared to delete our progress and are left waiting for a patch.  We’re not the only reviewers to have run into this either but also we can’t help feeling that basic playtesting should have picked this up.

On the plus side, there are lots of in-jokes in the game that guitarists will pop for.  If you don’t play guitar you might not get the significance of references to alternate picking or e-bows though.   There’s a big soundtrack of metal music and you can check out all the bands in the extras to find out more about them (they’re all pretty much smaller bands on indie labels but that’s no bad thing).

Graphically the game is a little average with its three main settings (a bar, a festival and hell) all being similarly dark and devoid of much character.  The cutscene stuff is reasonably well drawn and the bosses are okay but this isn’t a game that will wow you visually.

But really none of that matters if we can’t play the game.  However, when it was working, it wasn’t bad.  Our first impressions weren’t great for sure but after a while we did start enjoying the game (which is why it’s not scoring zero) and we expect the game to get patched so we’re not looking to tank its metascore but this has to go down as a pretty disappointing release albeit it one that could benefit from a few fixes and gameplay tweaks.  We’ll be keeping an eye on its progress.

Metal Tales: Overkill
3 Overall
Pros
+ The shooting is mostly enjoyable
+ Decent in-jokes for guitarists
+ Some of the roguelite elements are okay
+ Lots of metal music
+ Has promise if it can get past the technical issues
Cons
- Hopelessly broken technically
- One of the perks makes the game trivial to complete
- Visuals are weak
Summary
With its mix of twin-stick shooting, roguelite elements and heavy metal music, Metal Tales: Overkill has some promise but is let down by game-ruining technical issues.