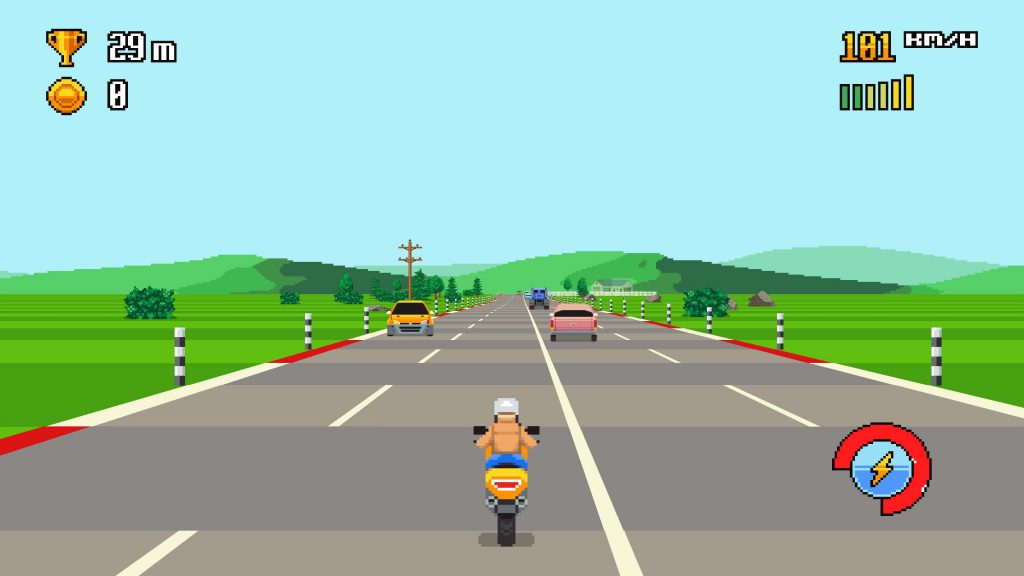 Ever since self-publishing became a thing for the PS4, the floodgates have opened to all types of indie games. It has been a great source of content for sure, but of course because of this we are also seeing a ton of games which would have been hard stopped by the Sony approval process at full strength. Think stuff like Life of Black Tiger, Mastercube and the myriad of raunchy dating games. None of these would have made it to the store had Sony have been keeping a watchful eye like they used to.

Like this, games that were developed primarily for mobile would have sat in a similar category, albeit this was mostly down to the cost of licensing for the platform, rather than the overall quality. Regardless, you wouldn’t have seen them before, and their presence today has often been derided as a sign that overall standards have slipped. Whether that statement is true or not is entirely up to you. For me, I have been relatively neutral on the whole idea. With mobile games resembling retro arcade experiences from my youth, I give them a mostly free pass. This is shaken of course when the trappings of free to play gaming comes in with micro transactions and whatnot.

The biggest issue that I and many have with mobile games on PlayStation is that some games just don’t translate as well from a touchscreen to controller. Like the control method or not, touch screen has its advantages, such as the ability to zip from one end of the screen to another by swiping a thumb which is far more immediate than dragging an analogue stick cursor across the screen. You often encounter menus that are clearly designed for a more malleable touch input than switching through with a D-Pad, Which can cheapen the experience and make the player feel like a secondary consideration. It’s far from ideal sometimes. 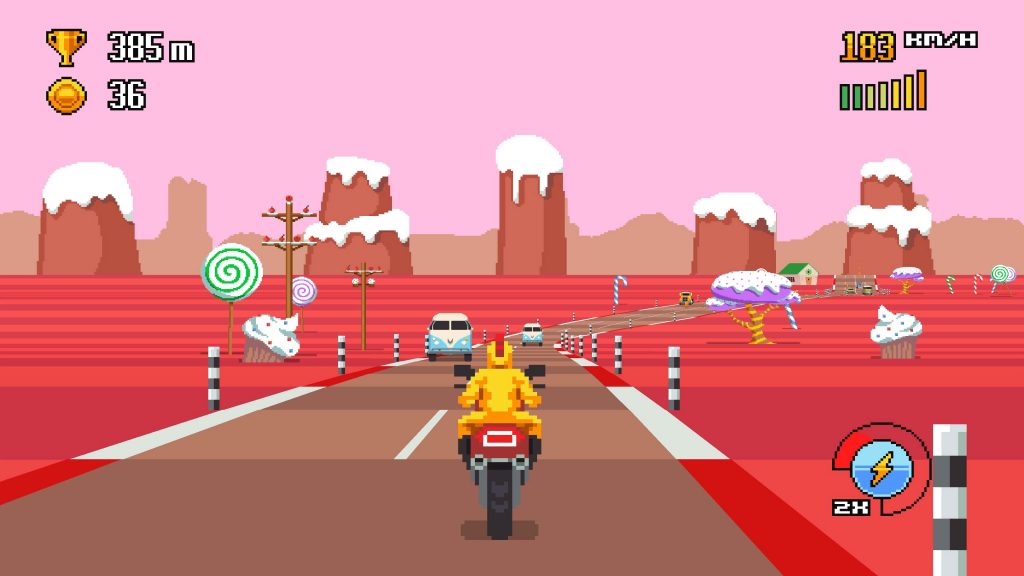 Digressing from all that though, lets talk about that retro factor.  Of course, retro tinged games are nothing new, whether you are playing on a phone or pad. The pixel aesthetic is a treasure trove that has been constantly plundered and it’s hard not to see why. It looks great and nowadays is inexpensive to put together. It also has a habit of being nostalgic to aging gamers like myself, who see something like Retro Highway, which immediately conjures thoughts of Road Rash and Super Hang On thanks to the familiar visuals and lush, pixelated summer skies. It’s hard for a thirty-something to resist really.

As is suggested by the screenshots, Retro Highway is cut from a similar cloth to the previously mentioned titles yet plays like the infinite runners that you have tried at least once on mobile. You play as one of many unnamed bikers as they must race along an endless road, collecting coins and attempting to survive an onslaught of incoming traffic, Sunday drivers and various other obstacles on the road. It’s about what you would expect from an infinite runner, given that open road motorcycle tinge.

For a synopsis, you could easily end it there, this is simple stuff. However, where Retro Highway earns the score is from the gameplay. As basic as it seems, there is a strong ‘one more go’ vibe to be felt here. Bobbing and weaving through traffic near misses and hitting ramps to get air is incredibly moreish, especially when considering the long-term goals that are given to you throughout. These come in the form of challenges that you can complete during your runs, whether it be performing specific stunts like skipping over car rooftops, knocking over traffic cones, or purposefully getting close to run ruining puddles. Each challenge provides currency to help unlock stronger powerups, levels and bikers with the aim being to unlock everything in the game over time. 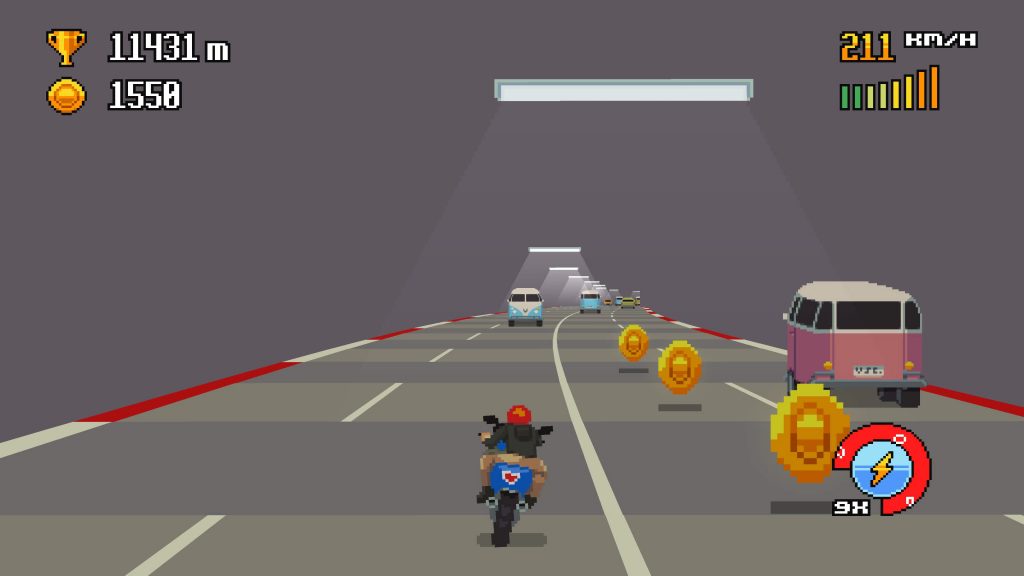 There is plenty of variance with the challenges that it is just enough to encourage another quick road trip. However, some would be forgiven for wanting to stop playing when the last track is unlocked as there is little else to do other than unlock the most expensive biker to bask in your mastery. None of these challenges are particularly difficult, but the developers understood that some require a skillset that others may not possess, so I appreciate the ability to skip certain challenges, with the downside being that you are unable to skip any further challenges until an arbitrary 15-minute timer has counted down, which is a less than subtle nod to the games mobile phone origins.

It’s a shame then that with unlocking upgrades for your biker and powerups is the intrinsic element that makes this fun, as there is not a lot to actually work toward. There are only six environments to race through and despite their unique appearances, they don’t add much to the experience other than increased traffic and an abundance of level hazards to consider. Had these levels have been more populated with unique gimmicks like the Candyland level that has powerups that change your biker in weird ways, this could have added much needed variability to the overall experience. Instead, five out of six levels play mostly the same.

The other gripe is that control method. It feels that the game is suffering from that conversion between touch screen and controller input. Admittedly, i have not played the mobile original, but sometimes the reaction times from my bike felt that it was moving too slowly, whereas a touch screen or gyro input would provide a speedier steer. For the most part i was able to control fine, but there were definitely times that i felt that the bike could have turned faster than does, with unseen obstacles becoming impossible to dodge in time. 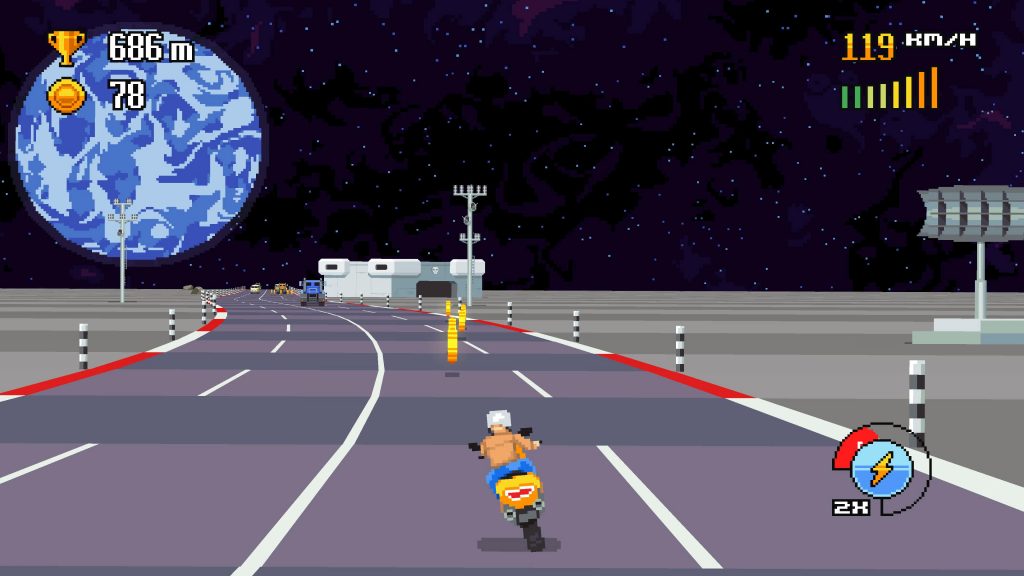 Let’s talk about that aesthetic though. If you find yourself drawn into the visuals then chances are, you had a Super Nintendo or Sega Mega Drive back in the day. It’s a damn shame that EA didn’t continue the Road Rash series in some way. As a result, I am sure that this is the reason why Retro Highway exists. This has swooped in and partially filled a nostalgic hole left by that series when it disappeared so rudely. This nostalgia permeates throughout, from the Emerald Hills stage (Nice Sonic Reference) to the scratchy yet endearing soundtrack that sounds like it was composed on a Yamaha YM-2612, albeit with that haphazard third-party quality.

Retro Highway definitely serves a purpose. It harks back to the glory days of playing Road Rash on the Mega Drive and by that merit alone, I am glad it exists. However, it is also clearly a mobile phone game that has been ported to PlayStation and this comes with the trappings that go with that. It’s fun and a game I would recommend as a palate cleanser between bigger experiences. It just doesn’t go the extra mile to achieve true greatness on its own.

Retro Highway
7 Overall
Pros
+ Has that ‘One more go’ vibe
+ Simple pick up and play gameplay
+ Colourful, Sega like aesthetic
Cons
- Feels like it was built for a touchscreen rather than analogue sticks
- More incremental unlocks would have been good for repeated play
- Unlocked levels change the theme, not so much the gameplay
Summary
Carrying its heart on its sleeve and fun in short bursts, Retro Highway aims to fill the hole that the lack of Road Rash games has opened over the years. It’s unfortunate however, that it just doesn’t go that extra mile to elevate this to being more than just an entertaining distraction.