We’ve been fans of the Jackbox series ever since it first arrived on PS4 and as a group the writers and our mates have had many a good session on these games before.  Of course, these all lead to pretty much the most offensive humour ever because we’re idiots but this series always ends up providing a good time.

If you’re uninitiated, these games are party games where the participants use phones or tablets to select, write or draw their answers depending on which of the indivdual mini-games they are playing.  They all join via a website and these games can be played in a large group (which is best) or over Twitch/YouTube which is what we did.  Streaming Jackbox Party Pack 6 tended to have a ten second delay for those watching the stream but that’s better than what it used to be.

This particular pack offers up five games, all of which play pretty differently but are mostly variants on previous packs’ mini-games.  Thankfully, there are no arcade-style titles like last year’s Zeeple Dome mode.  These don’t work that well over a stream but the select of games here all do. 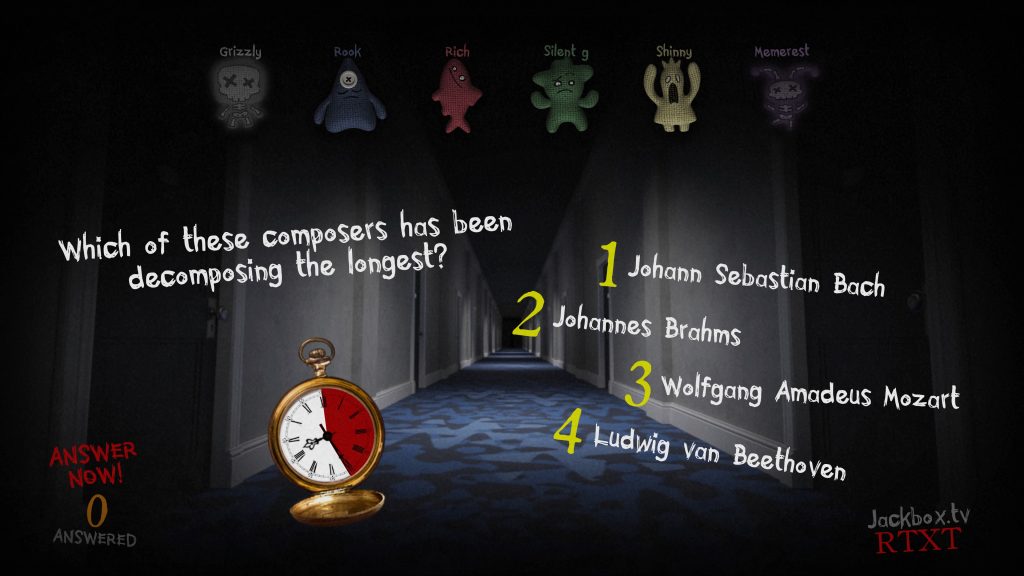 Trivia Murder Party returns after last being seen on Jackbox Party Pack 3.  This game puts the players in a hotel where you have to answer trivia questions.  If you get one wrong, you’ll go to the murder room where you’ll have to play a little mini-game to try to stay alive.  These games are pretty small and tend to rely a fair bit on luck.  If you do die, you can still answer questions and can even win your lift back in the final round which sees players answering questions to help them race to the exit to escape.

This mode is your standard trivia mode but the whole murder hotel vibe does elevate it somewhat.  It’s a shame though that the games you play to survive seem so random at times.  This is a fairly solid offering though and we did appreciate the option to turn off USA-centric questions. 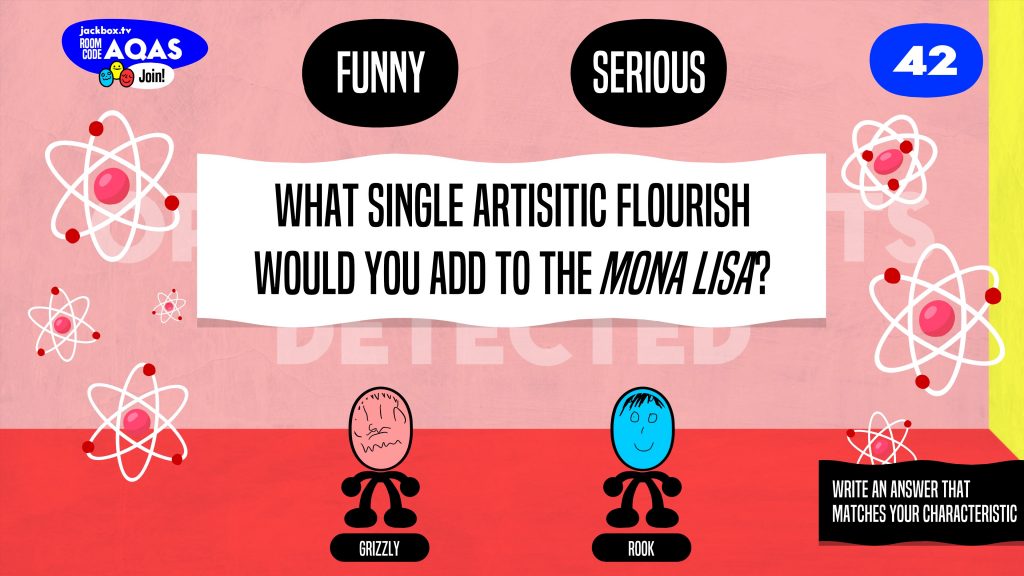 This mode is one that only really works with friends (as opposed to randoms joining via your stream) as it asks you to assign random characteristics to each person in the group.  Generally you score by agreeing with the majority of the group.

While this mode works well, it never really tests either you knowledge or your ability to be funny and as such has less value, to us as a group, than modes where you can really express yourself. 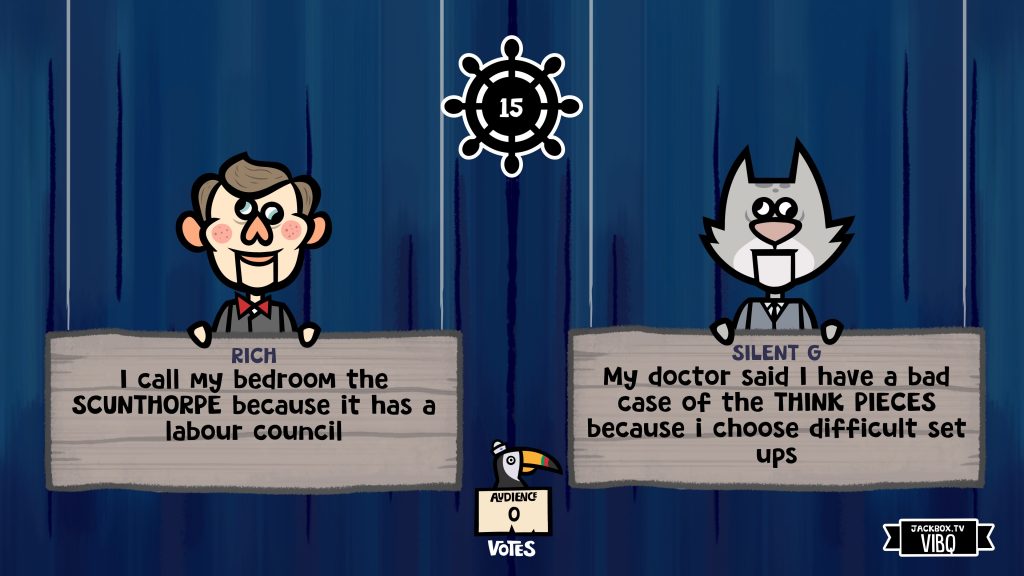 Standing out as this year’s best mode, Joke Boat challenges players to write comedy by getting the group to pick various subjects and then giving each player a choice of two set-ups.  You then write the punchline based on what you’ve been given.  This was definitely our favourite event as it allowed us to express ourselves the most (leading to a bunch of rounds where I couldn’t get an appropriate screenshot at all) but while it was good, it doesn’t live up to Jackbox 5‘s equivalent game which was the robot rap battle game, Mad Verse City.

That said, if we were compiling a ‘Best of’ compilation of Jackbox modes from the six games, this would make it one there. 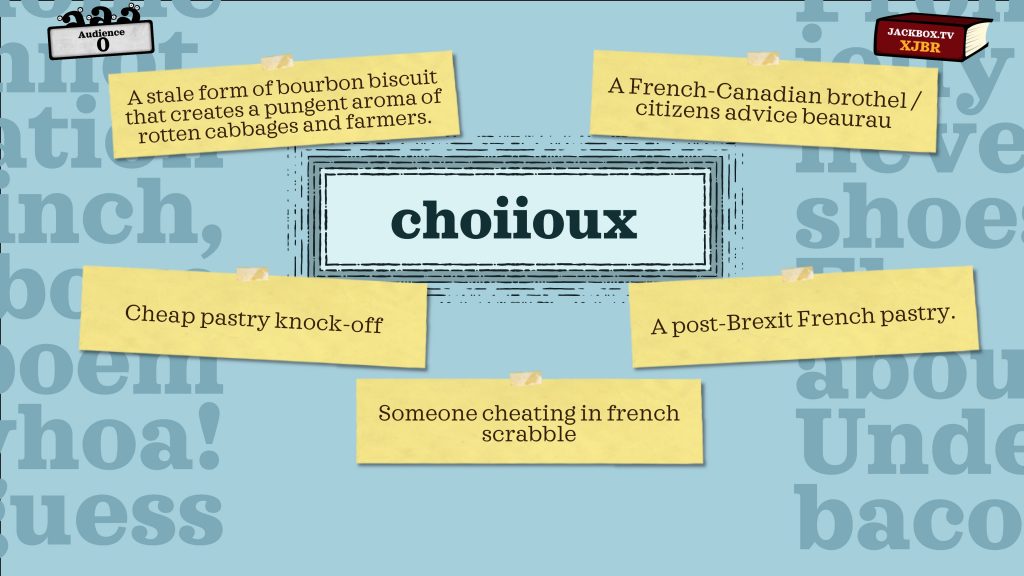 This mode is similar to Quiplash from the earlier Jackbox titles.  It gives you a made up word and then asks players to assign a definition to it.  The group votes on a winner and then you have to come up with a new word for that definition.  Or something.  To be honest the format of this game meant it didn’t flow as well as Quiplash does and puts shackles on your ability to come up with entertaining answers, as much as we tried.

However, if you can get into a Stephen Fry QI frame of mind and switch your brains from ‘rude’ to ‘witty’ then there is some fun to be had here. 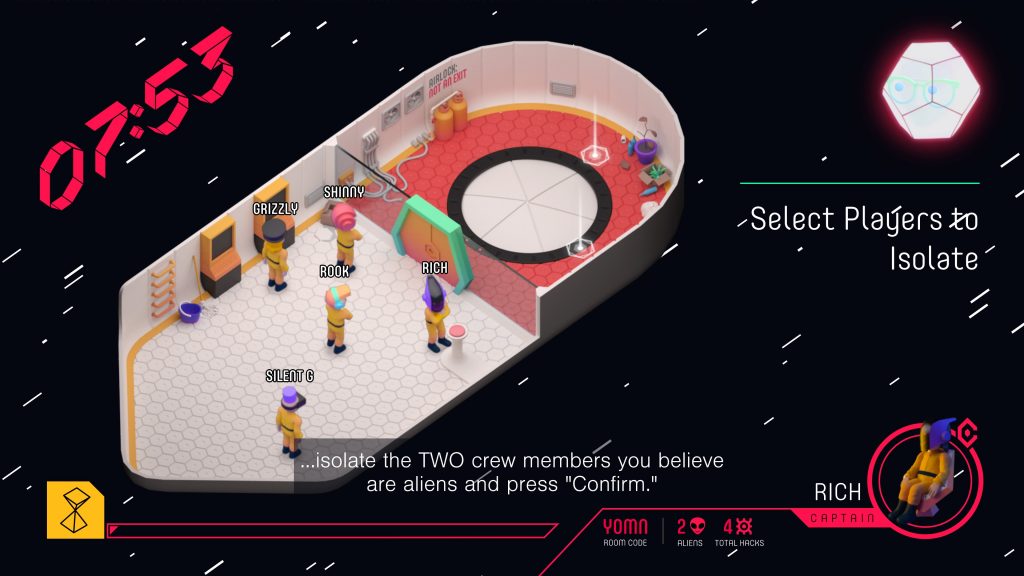 This game was the one we didn’t expect to enjoy too much and it does have a slightly complicated set up but once you get into it, it’s actually one of the better ones here.  The idea is that you are all on a space ship that is under attack by aliens.  A number of players onboard are human and some are aliens and it’s up to you all to sort it out.  The aliens know who the aliens are, the humans don’t.

It’s a really good take on the idea of the 1982 horror film The Thing and it does genuinely create distrust.  Definitely a game that we’ll look to play again. 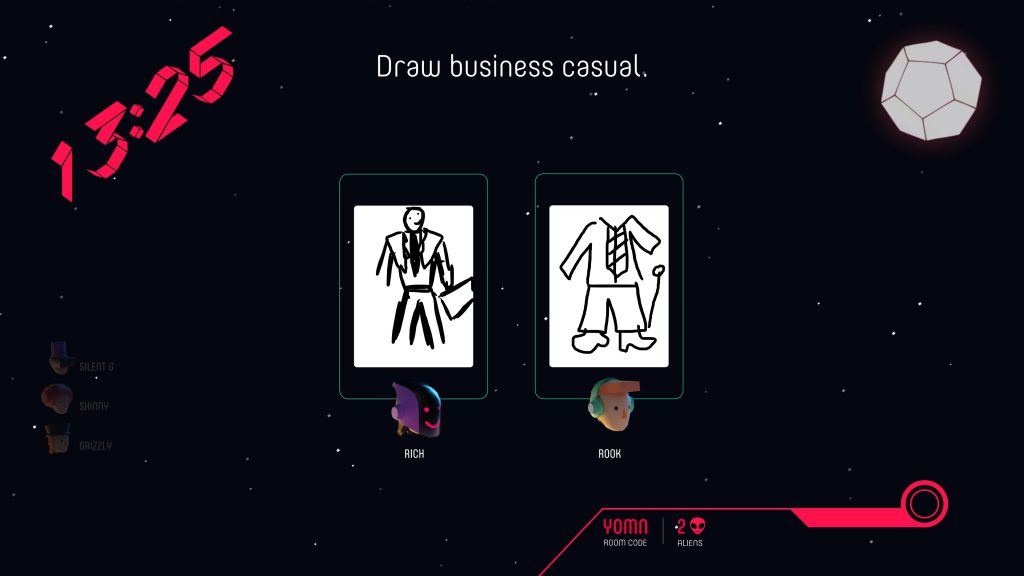 Overall, this is a good collection of party games.  The classic Jackbox presentation, creativity and humour is still evident throughout and, technically speaking, it all works as smoothly and reliably as ever.  We did appreciate some of the quality of life options in the game and had a good time playing it but only Push The Button really did anything new and Joke Boat, as good as it is, might not be enough to have us firing up this version over the last one.  But that’s because we’re a sucker for ridiculous rap battles.

Your mileage may well vary and either way, this is still a very solid compilation.  These things are always a little hit and miss but if you’ve got a group of friends over, you can do a lot worse than set up a few rounds on this.

The Jackbox Party Pack 6
7 Overall
Pros
+ Good variation in modes
+ Works reliably
+ Joke Boat and Push The Button are really good fun
Cons
- Is starting to recycle old ideas
- Modes are hit and miss
Summary
Jackbox Party Pack 6 is a little bit light on new ideas and is hard to recommend over some of the earlier ones but, as ever, offers some great party game fun if you've got a good group to play with.