Zombie games, they never die do they? Rather apt really. You can go back ten to fifteen years and people were calling for a break from them. Similarly the open world genre is saturating gaming somewhat, with every game needing huge maps with icons all over it to keep the player interested for tens of hours, at least. Dying Light 2: Stay Human ticks both of these boxes, but you can’t write off a game because of what has come before. It needs to be given a chance and depending on your opinion on large open world games you really do need to give Dying Light 2 a chance. 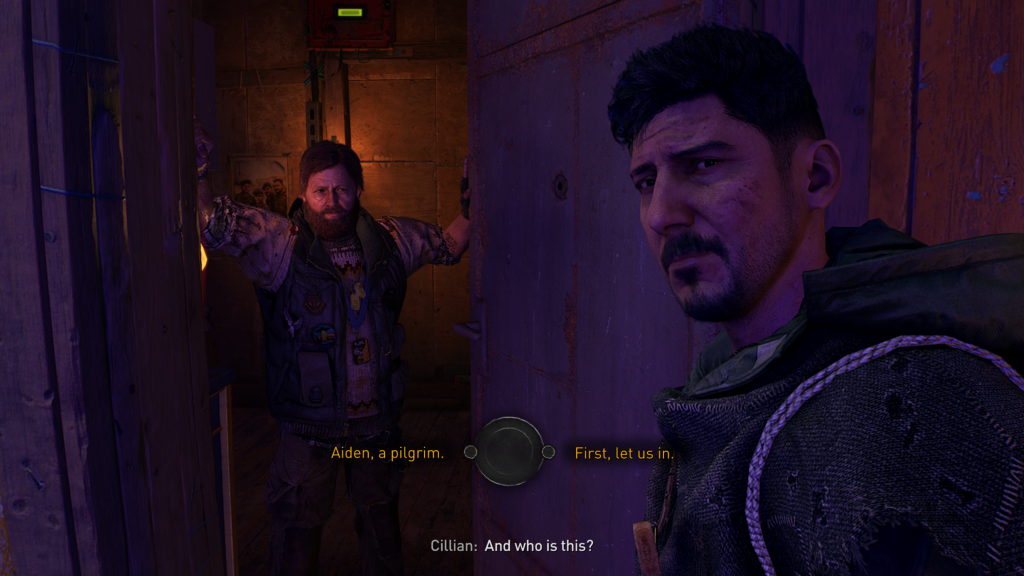 You control Aiden, a pilgrim in the world of Dying Light 2. Pilgrims are people who live outside of the walls of what little civilisation remains and are both rare and feared. At the beginning of the game he is travelling to a city in order to look for his sister, whom he was separated from as a child. It’s quite a lengthy sequence and unfortunately Aiden doesn’t make it without being bitten and thus infected. Thankfully in the city that’s quite common and they have methods of countering this otherwise life threatening issue which has a major impact on gameplay.

The infection is kept at bay by sunlight so if you’re out in the day there will be fewer zombies (virals) wandering around and your infection might as well not exist. At night time however it’s a different story with a range of zombies flooding the city and an infection meter slowly ticking down. Settlements have taken to using UV lights in order to fend off both the infection and the zombies so seeking out these shelters is key if you’re going to be exploring during the wee hours. 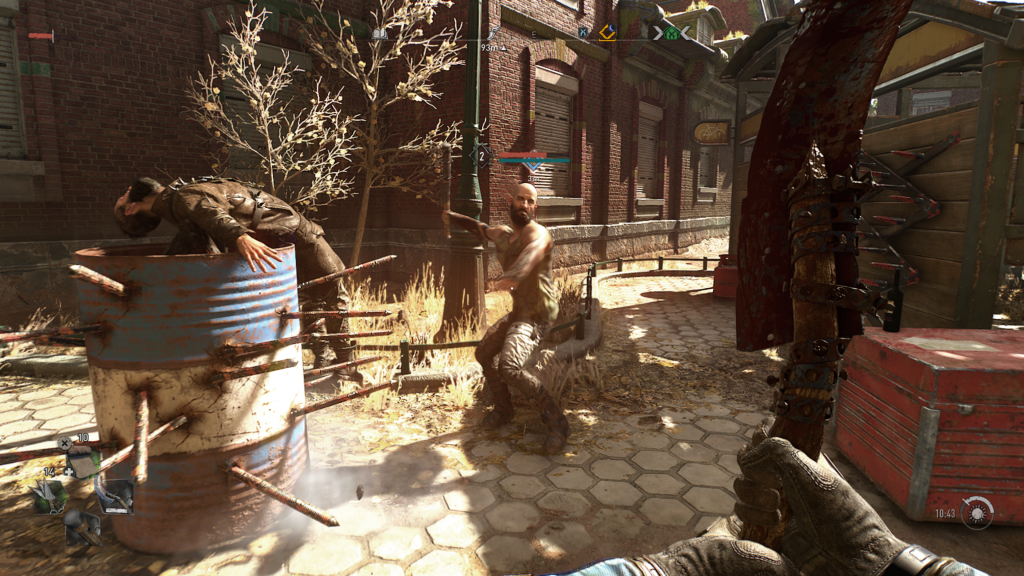 And explore you shall as once you get out of the rather long tutorial section you will become everyone’s errand boy. Aiden’s background as a pilgrim makes him particularly good at completing jobs around town. His skill set lets him combat the weaker zombies with little issue and, more importantly get around the city at speed. As with the first Dying Light parkour plays a pivotal role in the gameplay with Aiden able to climb structures with relative ease for a first person game. Eventually. He’s good to start with but there is a slow build to your powers which will irritate some.

You can jump, climb and swing from the off but you’re limited by a stamina meter which will drain as you do so. This stops you being able to climb the more complex structures early on but also limits the fun a little as Aiden stumbles around, slowly climbing walls and getting hurt from falling short distances. You will gain experience as you fight and free run which will level up each stat and after a while you’ll have unlocked some key moves in each skill tree which make both the combat and movement far more enjoyable. 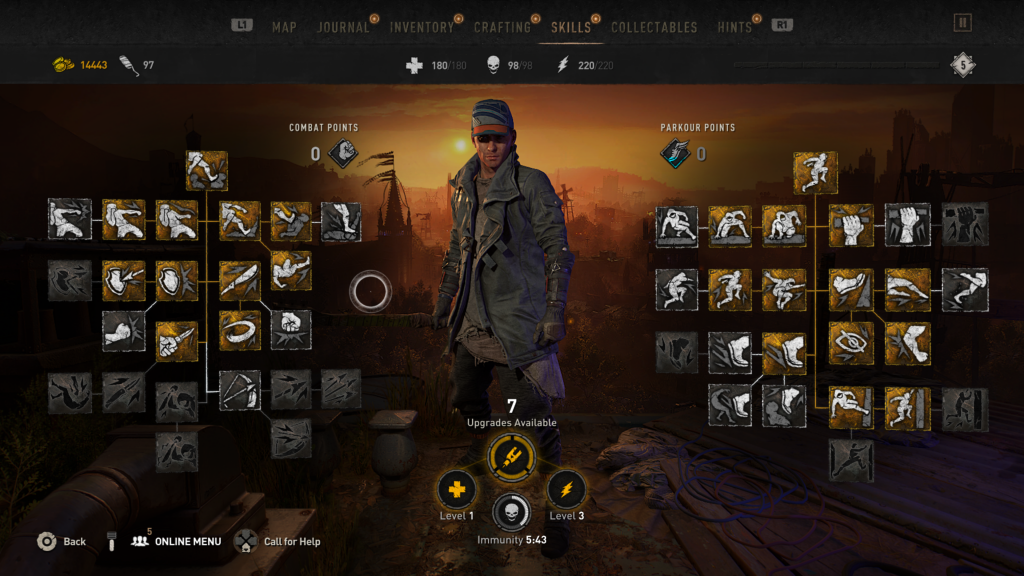 Combat-wise this can be basic stuff like a power attack you get by holding the attack button or blocking projectiles to more varied stealth kills and the awesome drop kick attack. Movement-wise you will climb faster or be able to do a roll to soften your landing before wall running and being able to perform large jumps off of pretty much anything, including zombies. Some of the powers are pretty basic so the fact you have to put a decent amount of time into unlocking them does make those first hours slightly more of a chore than they ought to be but once you get them you’ll be having a blast just running around.

Which is handy as that’s the main meat of the game. This is your typical open world that is filled with stuff to do. You have story missions which will lead you through the game, sending you to new areas and giving you new equipment to aid in traversal and combat. Then there are loads of side missions which you’ll encounter as you explore which are worth checking out as they have more story than your average game’s side quests and apart from the odd one or two which are just find this or deliver that are actually decent little stories in their own right. 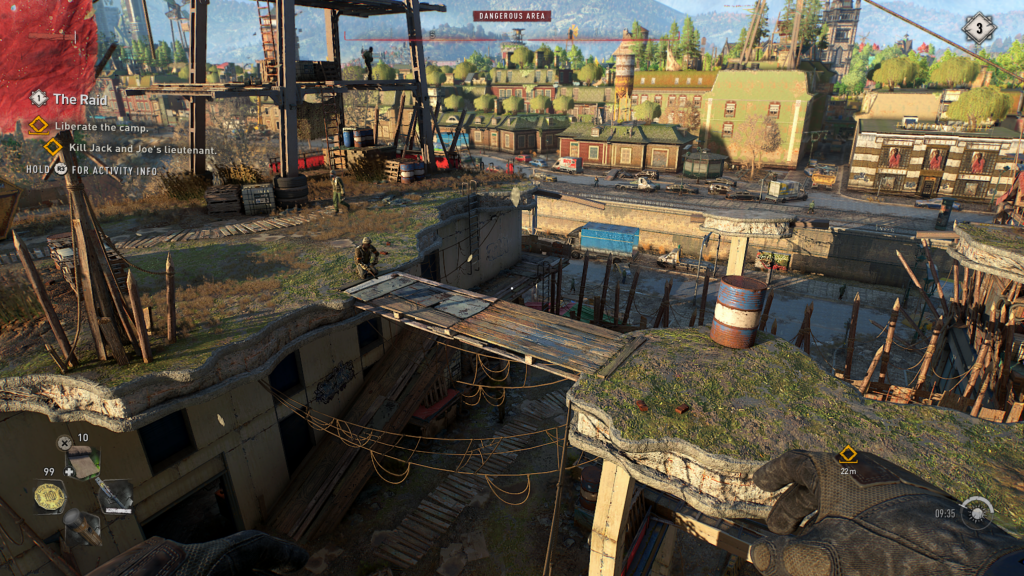 You can just explore as well, which will help you activate rest areas so you can find some safety at night, and areas which can be explored for goodies. A lot of the time that’ll just be equipment (weapons and armour) or materials for you to craft healing items, tools to help counteract the infection or distract zombies. However there are Inhibitors which grant you more stamina or health which can be found littered around the world, primarily in Dark Zones. These areas should only be explored at night as during the day the zombies are hiding away from the sunlight in them. They aren’t empty at night but they are far less deadly with your main concern being keeping your infection under control in the darkness.

These areas tend to respawn too so you can raid them for items over and over (not inhibitors though, unfortunately) if you’re in dire need of materials. You can’t argue that Dying Light 2 lacks content, with the developers comment that there is 500 hours of content maybe a slight exaggeration, but there are branching paths through the story and lots of other, minor choices to make as well which to see it all would probably take a long, long time. Unfortunately for such a long game there is quite a bit of missable stuff in it, whether that’s side quests or collectibles and at launch there is no New Game+ mode which makes the thought of levelling up all those skills all over again an unpleasant one. Supposedly it is being worked on and will arrive in a patch post-launch however so that’s something to look forward to. 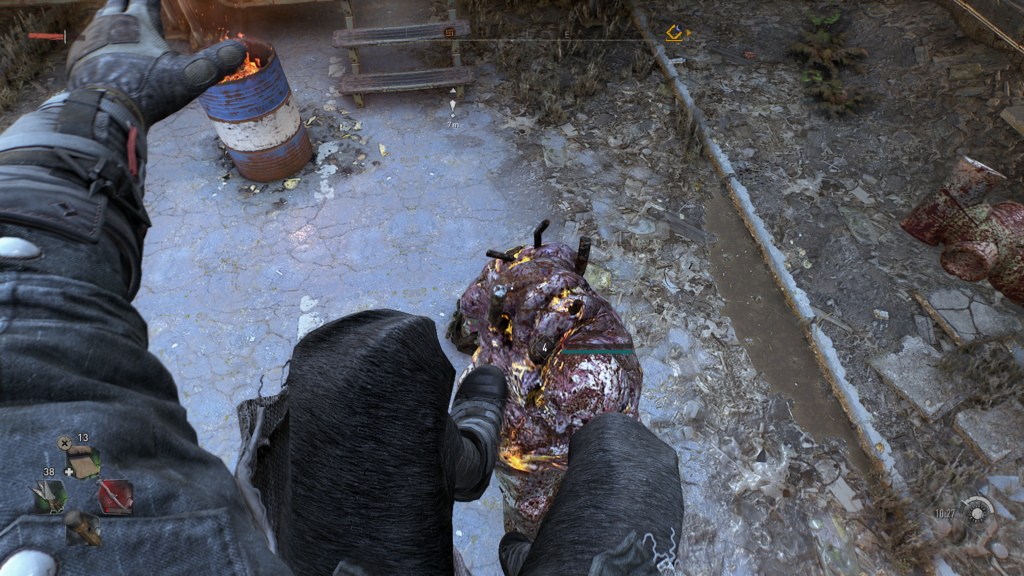 It could do with a couple of patches anyway. I’ve not had many major issues with it but I’ve had a quest keep reappearing every time I launch the game no matter how many times I complete it, I’ve got stuck in geometry a lot though you can wiggle free and I’ve fallen through the world a couple of times. Luckily the game just respawns you at a nearby safe area if you die, you don’t lose any progress but at night you lose any bonuses you may have gained.

It runs well too, with a few options to choose from on PS5. There is a high resolution mode which runs at 30 fps, a ray tracing mode which also runs at 30 fps and a high frame rate mode that runs at 60 fps. I started with the ray tracing mode which was fine, but when I switched to the 60 fps mode I never looked back. The game can look really nice, especially as you’re high up over the city. The resolution is comparatively low on two of the modes but I can’t say it was particularly offensive on my 4k screen. Character faces are detailed and well animated, though obviously major characters get a little more attention. 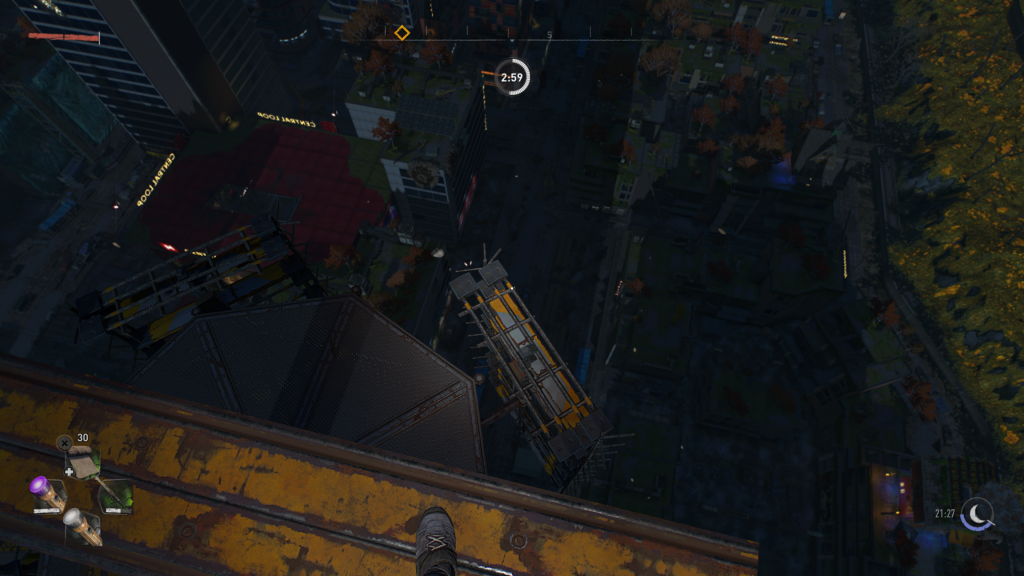 The initial load is slower than the average PS5 game but once you load in that’s it. Respawning or fast travelling is as good as instant and there are no issues moving across the city at speed. The controller features are used as well with haptic feedback which is subtle but does add extra heft to everything you do.

You can share the experience in up to four player online co-op which is a welcome feature. It may make it easier to experience all those branching paths, with two key factions to side with as well as other story decisions. The more extravagant moves you get for both movement and combat make this a fun experience, especially with friends though the length of the game makes it a hard one to co-op in its entirety. 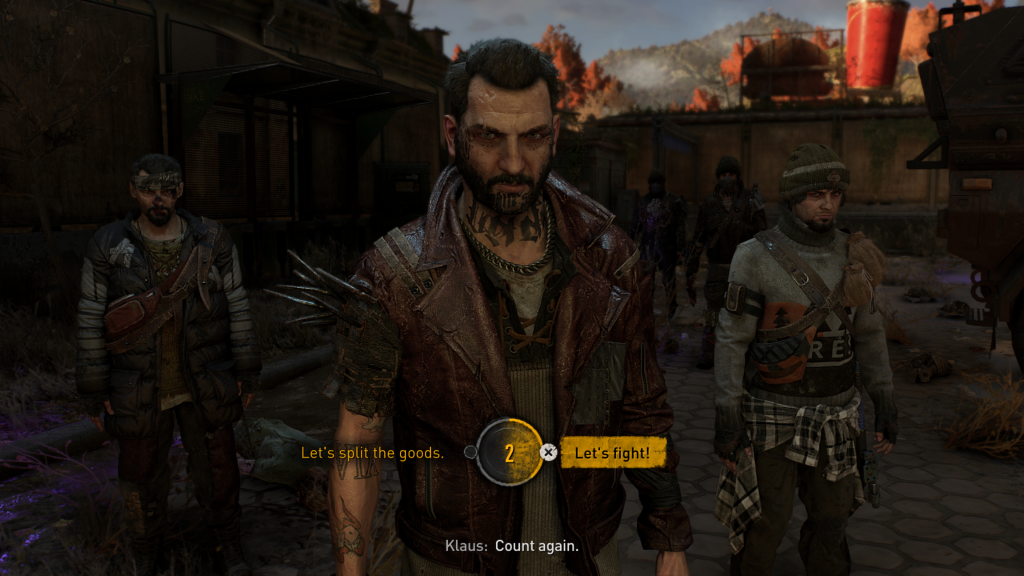 Dying Light 2: Stay Human is a massive game that takes a little while to get going. If you’re tired of open world bloat then you will probably be turned off. However if, like me, you enjoy running around an open world, ticking off objectives and seeing all it has to offer then once you’ve unlocked some of those movement skills you’ll just have a whale of a time running around. Add in some of the equipment you get from story progress and you’ll be traversing skyscrapers with surprising ease, whilst making jumps that will always make you hold your breath as you push Aiden’s limits.

That initial pacing is the major sticking point, otherwise all you can complain about is how much game there is which depending on the player could be considered a good thing rather than an issue.

Dying Light 2: Stay Human
8 Overall
Pros
+ Movement and combat feel great once levelled
+ Lovely to look at
+ Lots and lots and lots of content
+ Can be played in four player online co-op
Cons
- Slow introduction
- A bit buggy
- Lots of missable content in a huge game
Summary
Dying Light 2: Stay Human takes a while to hit its stride but once it does you'll be running across the rooftops with speed and grace. If packed open world games aren't for you then stay away, otherwise this has incredibly fun mechanics after a slow start.