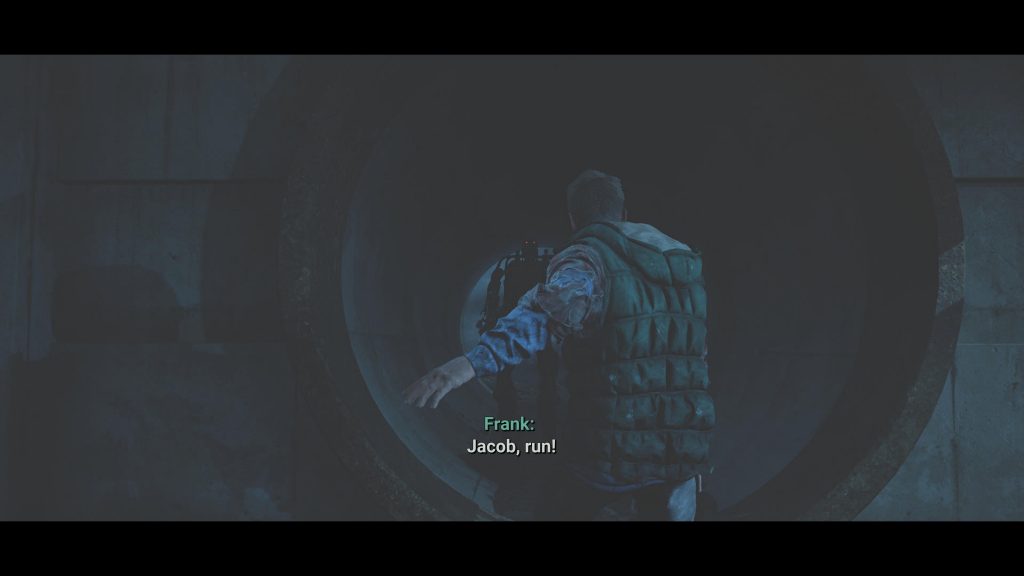 Of all the movie licensed games that have been coming out recently, Terminator: Resistance was the one that stood out as having the tallest mountain to climb. When it came out in 2019 there was a general expectation that it would fail due to this, thanks in no small part to the fact that Teyon, the team behind the dreadful Rambo: The Video Game on Xbox 360 was at the helm. Surprisingly, it didn’t stoop nearly as low. In fact, it exceeded expectations to the point where it became the best portrayal of the cybernetic killing machines in video game form (which I understand is not saying an awful lot.)

That’s not to say it didn’t have its issues though, as chronicled in our original reviews of the original and PS5 releases, it felt a bit too much like a budget/ previous generation title in both execution and design. This came at the expense of immersion and polish, though those that could look past this found that the experience was solid and enjoyable, particularly if you love the source material like I do.

Since release, there have been a few content drops that have padded out the Terminator: Resistance game, making this one of the few games in its scoring bracket to get this amount of support after the initial release. The first came in the form of the Infiltrator DLC which allowed players to switch sides and take on the resistance as one of the first fully skinned T-800’s off the production line. It was a fun, if limited mode that took the essence of Rogue-like gameplay and applied a Terminator skin to it. The best part of that of course being that it was free to all that owned the enhanced edition on PS5. 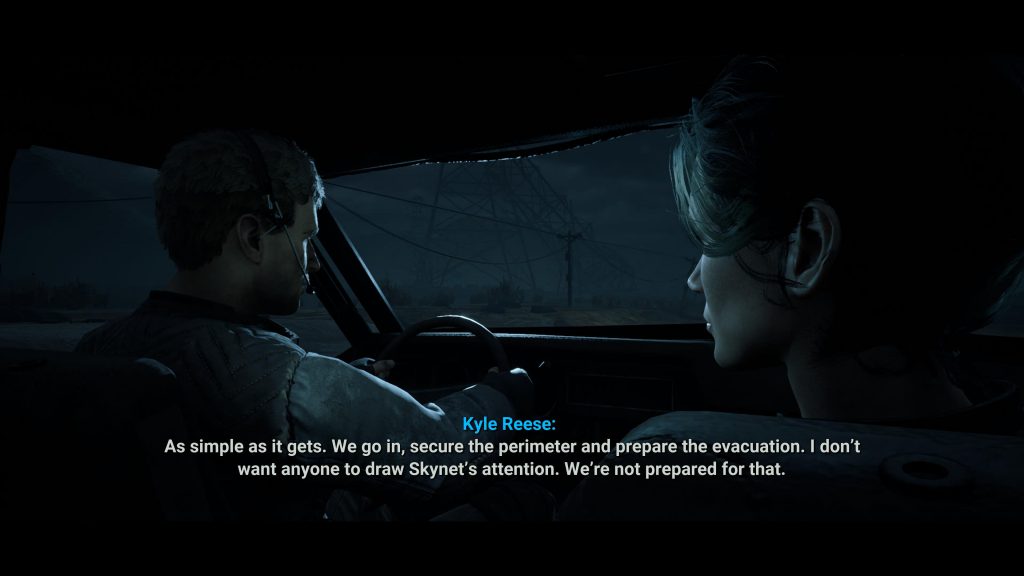 With this new Annihilation Line DLC, Teyon hopes to expand on the storyline of Terminator: Resistance with a new side narrative that explores the story of player-character Jacob Rivers, while introducing resistance granddaddy Kyle Reese into the mix. As a result of orders direct from John Connor, Reese has been sent to your underground base on a mission to rescue hostages from a nearby outpost that has gone dark. Fearing the worst; you, Kyle Reese, and his cohorts venture into the nuclear wasteland to cross the titular Annihilation Line, which is the name given to the walking execution squad of machines that are laying waste to every piece of humanity in its wake.

It’s a good setup, I think. Of all the things that players would have wanted to see from Terminator’s apocalypse, this procession of metal would have been right at the top of the list. The name and implication of such a thing is intimidating and downright exciting, as this is the kind of cheque that the opening future-war sections of the main films wrote all those years ago but had not yet been cashed in a meaningful way. Of course, this isn’t just a standup fight, the trappings and gameplay of the core experience have also seen a continuance into this DLC.

As Jacob and Kyle ventures towards and behind enemy lines, the player is greeted with the Fallout styled loot, shoot and stealth gameplay that was present before. Complete with stiff character animation, the janky textures and geometry that comes with it. This mostly stays the same as before, however where there are improvements made, they are felt strongly. For example, the gunplay is far more refined than before, with weaponry exhibiting a more balanced and weightier feel. The Terminators have also received an AI upgrade, they are now far more deadly than they ever were, with the kind of pinpoint accuracy you would expect from a supremely efficient death machine. 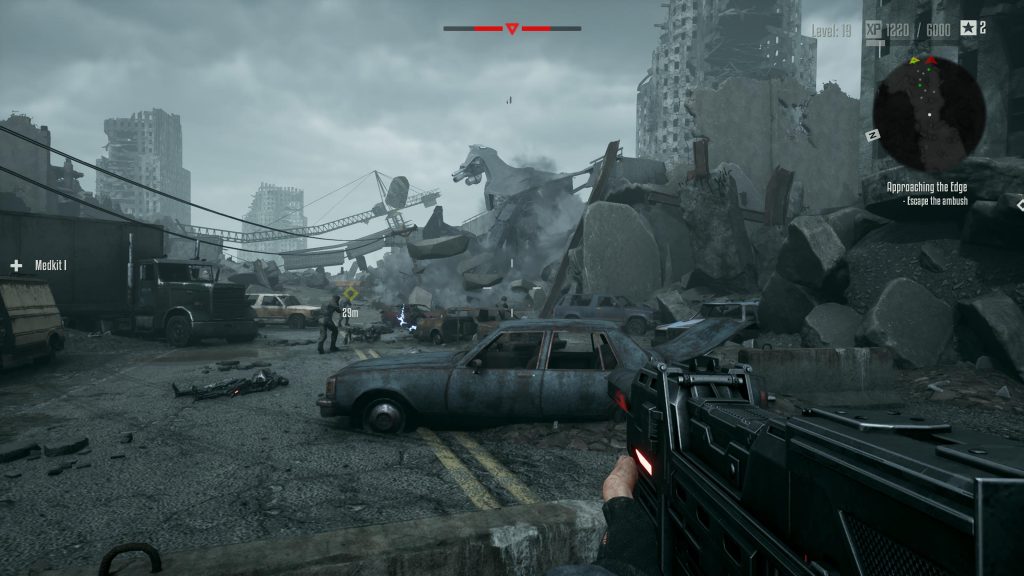 This focus on action and threat has made things far more interesting this time around. Each encounter or outpost feels like it requires strategy now, whereas before you could trounce through most with liberal use of violet coloured plasma rifles. While it is not impossible to get through, there is certainly more thought required, particularly as you get further in, and you encounter the kind of defensive forces that you would expect from Skynet itself. Also, there are numerous setpieces as you move from area to area, with the moment you encounter the annihilation line being one that will stick with me, for the sheer chaos and urgency of the moment.

More (surprisingly) impressive were the side-quests. While I would typically skip a lot of these in other games, for Terminator: Resistance I made an exception as this is where you would typically get the juicier narrative detail from the game. While still full of trite references that feel a bit forced, The Annihilation Line DLC expands on this with some clever and genuinely well thought out moments. In one of these, I was surprised to see something that felt straight out of the design doctrine of the first movie, which leaned closer to the horror movie origins than I was expecting. I won’t spoil it here and that is a shame as it is a moment that I feel is worth talking about. However, these moments are few and it may be one of those that may seem inconsequential to other players.

What made these side and main story beats so good for me, were the explorations of the Terminator story, that had either just been alluded to previously or been glossed over in favour of shiny, bombastic action. The burnt out remains of LA, the Skynet outposts and locales feel like they belong in the narrative universe, with some details going into how the Terminators operate beyond their murdering ways. This is the sort of insight you got from Terminator: The Sarah Connor Chronicles where not every T-800 is sent to kill a target, instead they fulfil missions to facilitate the war effort. This is replicated in the DLC to some degree, in ways that explain the way things work in the apocalypse in both spoken word and environmental moments. 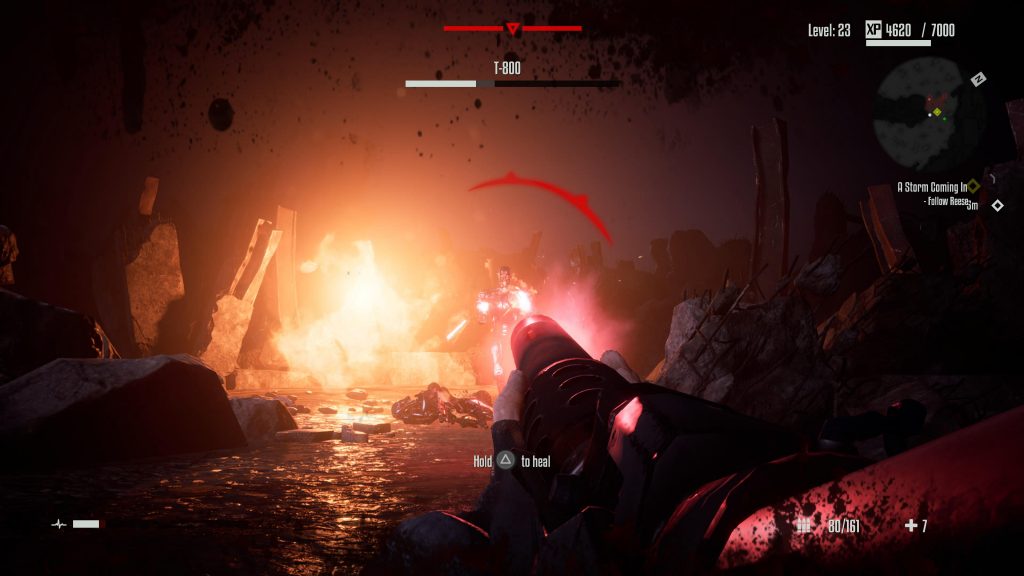 Just like with the main game, your mileage with Terminator: Resistance Annihilation Line DLC will be determined by how much you like the first two movies in the franchise and whether you can overlook the odd bit of shaky design to enjoy everything else. For me, I could get over the questionable moments and found myself enjoying this DLC in the same way I liked the core game. If you cannot though and you found the main game a slog, then the Annihilation Line DLC will do little to convince you otherwise as fundamentally, this is more of the same. The score below is heavily influenced by my admittedly obsessive fandom of the original source material. If you are not like me, then you could take a point off the total to paint a better picture for you.

As this is DLC, the score below reflects how I feel about the experience in the context of the main game. If you are looking for a reason to play Terminator: Resistance, then please consider reading the main review first for a better overall picture of what it has to offer before considering this DLC.

Terminator: Resistance Annihilation Line DLC
7 Overall
Pros
+ A solid chunk of additional content for the price
+ Some brilliant moments for fans of the original two movies
+ Improved gunplay and challenge
+ Solid Terminator lore expansion
Cons
- Forced ideas and references
- Nothing majorly new compared to the main game
- This is still running on the main game, so some jankiness is to be expected
Summary
Terminator: Resistance’s Annihilation DLC is a solid four-hour expansion to the main campaign. While it retains some of the foibles that kept the original experience from reaching a higher score, there is a lot to like about what this content brings both in the narrative and action. For Terminator fans that want to experience every piece of lore associated with the first two movies, this is a treat. However, if you found yourself burned out by the main game, then you may want to give this a miss as it is mostly more of the same.