Chorus is a space combat shooter from Fishlabs, the German developer best known for the popular Galaxy on Fire series (a similar set of space shooters that made their name on Android and iOS) and is their first original console title, following on from a couple of Saints Row remasters.  The game is a proper seen-from-behind space epic, the kind of thing that we used to call a Space Opera back in the 16-bit days (if you’ve played Wing Commander, you’ll be familiar with this type of game).

You play as Nara, a talented and deadly fighter pilot who was previously something of an enforcer for The Circle, an evil cult bent on taking over the whole universe.  Her and her ship, Foresaken, had terrorised space and had even destroyed a whole planet before she saw the error of her ways, abandoned her ship and started fighting for the Resistance. 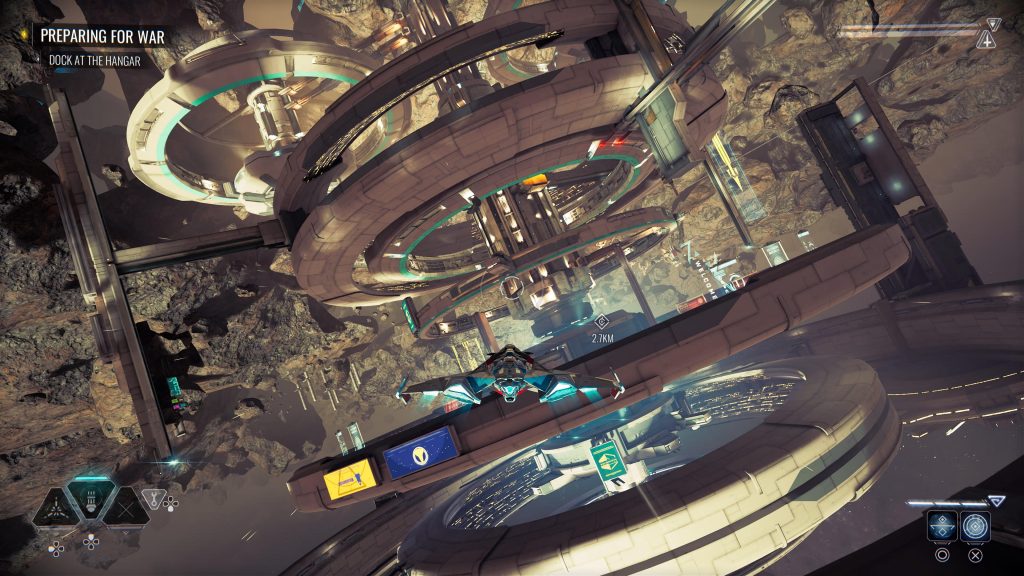 That’s where we pick up the game, with Nara flying around in space in her cheap and cheerful ship, taking on pirates and Circle members alike.  The game has a degree of openness to it, so you can either plough head on into story missions or take on side missions which are identified by scanning the local area for points of interest.  You’ll learn the basics of combat pretty quickly and then you’re free to have a wander around.

After a while though, things ramp up.  The Circle are on the lookout for ‘Chorus,’ the titular magical force that powers your ability to scan and, later, do other things to make you a more fearsome pilot.  While not exactly being easy to start with, you’ll soon start facing tougher enemies and so gaining the ability to teleport behind them or drift (which lets you turn your ship around without changing direction) are very useful in helping you even up the odds.

What all the rites do though are make the combat work.  On a PC a mouse is the perfect thing for controlling a ship in a dogfight (just play the sensational Freelancer for an example of that).  Well, unless you want to invest in a whole stick set up.  But a joypad really isn’t the right tool usually.  However, Chorus‘ smart mix of abilities makes dogfighting a joy.  Sure, you’ll mainly be doing the Ace Combat thing of chasing down the enemy by spinning and swooping until your reticule is over their ship but the teleport rite and the drifting ability really take the pain out of it. 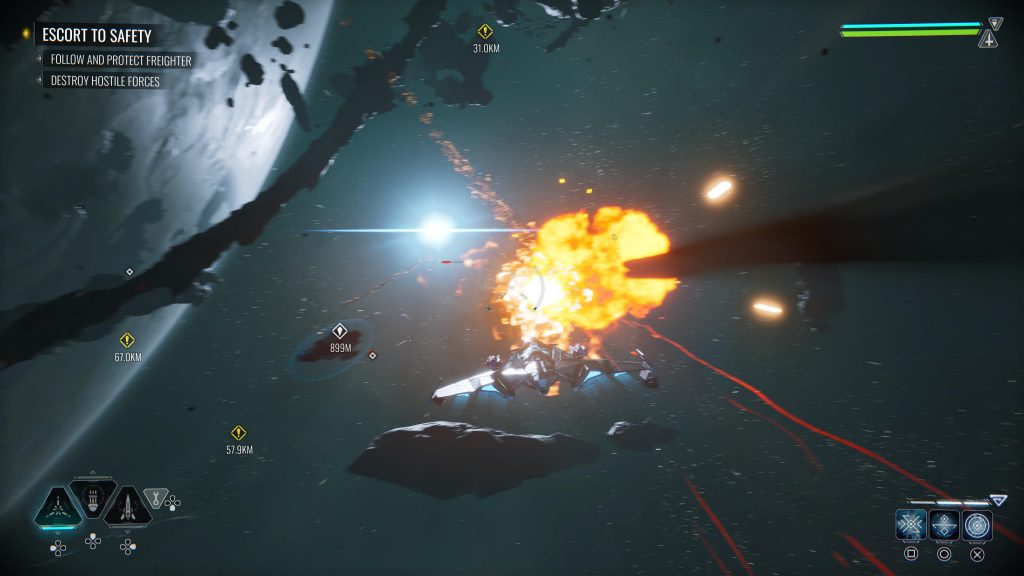 These fights are still tough though, especially when multiple enemies back up a stronger one and you’re suddenly eating laser fire from all directions.  Thankfully though the game has a good mix of difficulty settings from Easy all the way to Permadeath, so you’re sure to find one that suits you.  The trick, as ever, is giving you the power of a deadly, feared protagonist but still making the game a challenge and the game does well to manage that.

You’ll also earn cash along the way and this can spent on upgrades to your armour, shields, weapons and other gadgets.  The upgrades are a little limited in scope but it’s always nice to get a bit stronger along the way and if anything we just liked scanning the local area and finding hidden caches of credits. 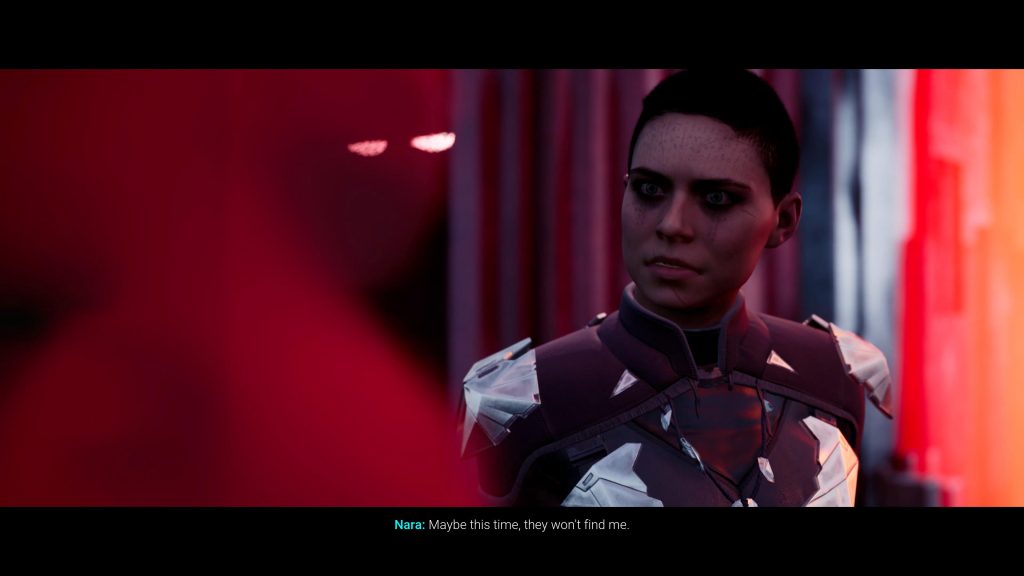 Initially we were a bit worried that the story aspects of the game would drag out, sci-fi after all does love to bang on about boring nonsense, and while the characters were a little flat and generic, we found ourselves relatively engaged with them, especially Foresaken, your somewhat grumpy ship that you end up reuniting with half way through the game’s first act.

Mainly though, the game is about those battles.  From high octane dogfights to taking on larger foes that are covered in turrets, the action doesn’t let you down and the controls, as we said, give you the freedom to really show off some skills.  All we want from these games if for them to be exciting and Chorus delivers. 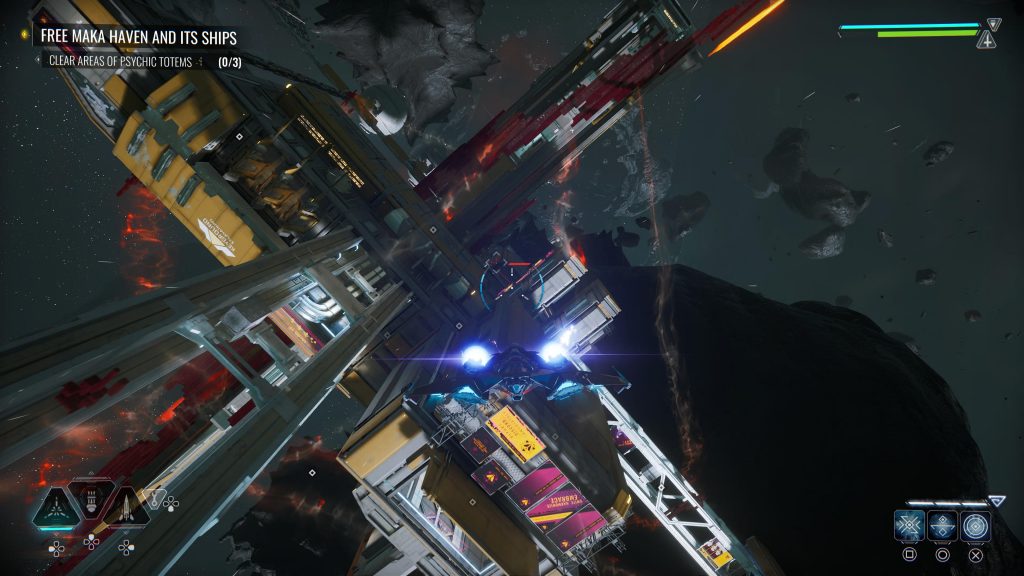 Well, okay, that’s not the only thing we ask for.  Space shooters should look great.  You want a bit of eye candy and a sense of scale.  Just because you’re in space, doesn’t mean that things have to look gloomy and, for the most part, Chorus does okay here.  The game has a nice high-res look to it although we’d like to have seen a bit more going on in the background.  Freelancer was good at putting colourful stars and planets in the background for example but Chorus is a little bit more restrained.  Also, we weren’t a big fan of the character models.  Some of the larger structures in the game are well designed though and overall it all looks decent.

The sound is nicely beefy with the battles sounding particularly dynamic when pushed through a sound bar.  And we did appreciate that all the conversations in the game were voice acted, albeit not especially brilliantly.  We’re nitpicking a little here though.  When it comes to presentation, Chorus is pretty good.  And we did rather like that you get to hear Nara’s inner thoughts, which makes some of her conversations a bit more interesting. 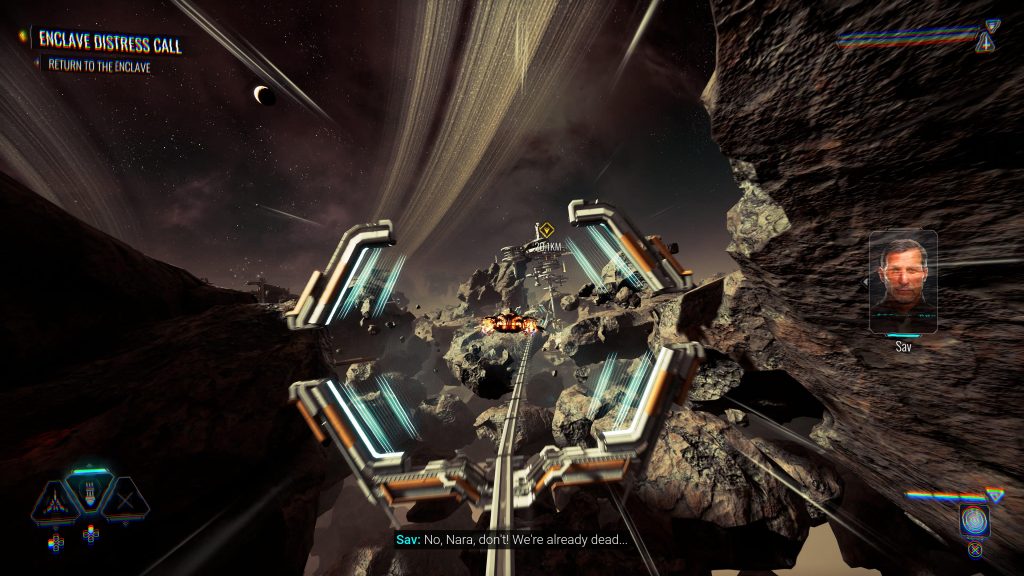 Aside from the positioning of some checkpoints (the game does that old school thing of giving you chunks of story after a checkpoint that you have to skip through if you die) and the occasional annoying mission (usually when you’re trying to find the way inside a giant asteroid or when you first learn to drift), there’s not much to complain about with Chorus and we’re just glad to see this genre back on consoles and done well without it being a big, convoluted mess or, worse, a multiplayer game.

So, if you’re in the market for a good bit of space combat and sci-fi dramatics, Chorus is well worth checking out.  It’s a mid-priced effort, costing you £34.99 which is just about acceptable given that game does feel like a fully-fledged game and not just an indie effort.  You’ll get a solid 15 or so hours out of it and while there’s not a whole lot of variation to the game, it does well to not overstay its welcome.

Chorus
8 Overall
Pros
+ Great space combat
+ Good upgrades and new abilities
+ Story is reasonably engaging
+ Good range of difficulty settings
Cons
- Checkpointing could be better
- Some missions, and waypointing, can be annoying
Summary
Chorus is a surprisingly traditional space combat game with great combat and an engaging, if dry, story. No multiplayer nonsense, no ship skins, no in-game purchases just a solid single player space shooter and we're here for that all day, every day.