From developer Hakama and publisher Marvelous in conjunction with chiefly localisation from the consistently great XSeed, we have Rune Factory 4 Special. It’s a refinement of the a 3DS game from 2012, though it took two whole years extra to localise for European audiences. Unless you’re a massive fan of the Story of Seasons/Harvest Moon games, it’s entirely possible that this entirely passed you by in 2014. Rune Factory 4 Special came out on Switch eighteen months ago, we guess that Marvelous knew the formula would work well on another Nintendo console. So does it work on PS4? Well, yes and no. 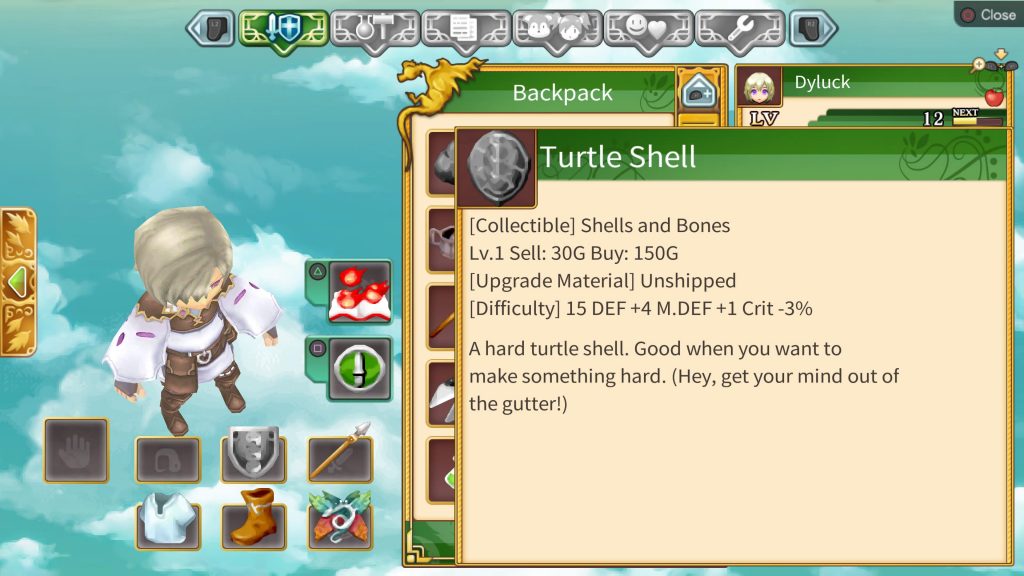 You see, Rune Factory 4 Special is very much game out of time. When you play it, you can clearly see how mechanics have shown up in similar games such as the excellent Stardew Valley for example. Farming is done better in Stardew and the anime ciphers that make up the supporting cast are so indistinct from one another that you’ll struggle to tell them from one another. Much less find them in the compact yet weirdly sprawling village cum town you find yourself in. Well apart from Doug. Dear sweet Doug. As the story reaches its second act, he shows up, acts all pissed off and refuses to interact with you after that. We won’t share the reason why.

It isn’t that Rune Factory 4 Special is bad as such, it just isn’t particularly vital. This isn’t helped by the long form nature of gameplay. You’re expected to play this exclusively to see what it fully has to offer. You could run multiple saves we guess, but when you have an entirely unskippable tutorial phase that drags on interminably, it becomes an exercise in tedium. 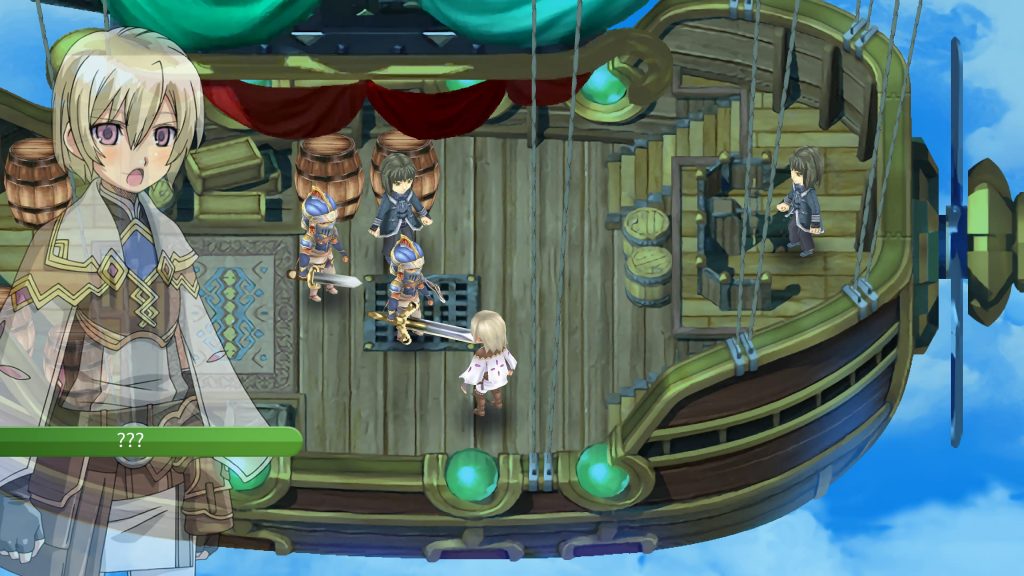 At the outset you get to choose a mael (Ron or Russell are the only acceptable names) or a female protagonist. Then you’re thrown into an intro sequence in which you find yourself on an airship, only to find yourself summarily thrown overboard. This lands you square in the throne room of the town that becomes your home. Naturally you’ve lost your memory so are a blank sheet. You can’t be evil though, merely just disinterested. Although we fully expect a final chapter reveal in which you’re actually the evil emperor that seeks to overthrow the otherwise tranquil kingdom. The setup is just too perfect to be anything but.

You’re welcomed with open arms as everyone assumes you to be a visiting dignitary they’ve been expecting. Never mind that the actual dignitary shows up shortly afterwards anyway, this is brushed off without a second word about your palatial accommodation even from the visiting prince. It’s a baffling leap to assume any royalty would defer in such a manner, their lackeys being more likely to kick up a fuss on their behalf. Either way, in another baffling leap, you have to earn your keep by being a farmer. Yeah, it makes no sense when you play it either. 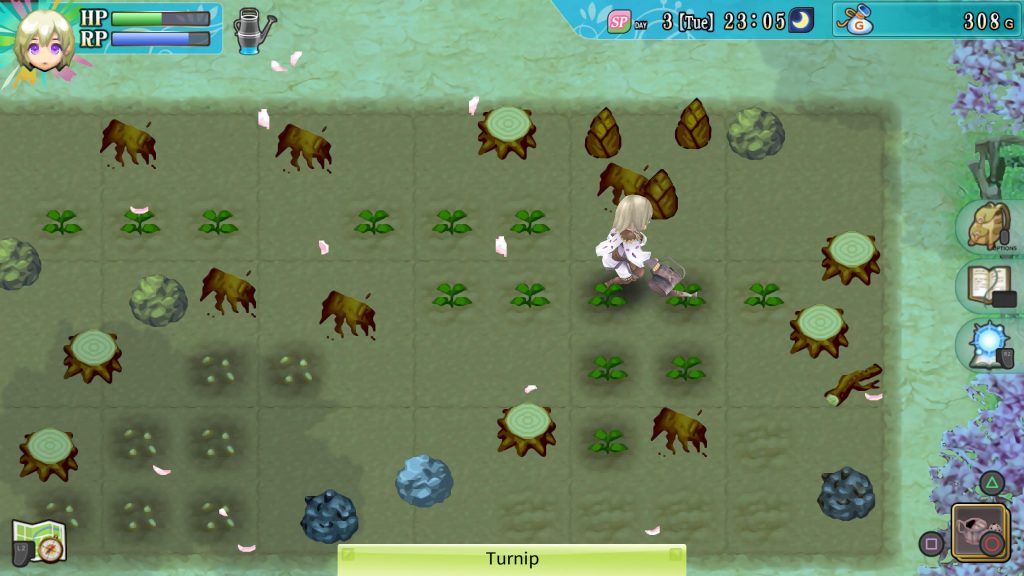 Conveniently there’s a field in the yard behind your gaffe, so you can crack on growing turnips. All of your actions are governed by your stamina bar, this essentially stops you from getting ideas above your station and crafting items that are deemed too powerful for your current state. That’s not to say you can’t cheese some boss encounters with excessive magic attacks though, but it’s an exception. Make no mistake, if you venture into an area where you’re underleveled, you’re going to be pummeled into submission or a swift death. We thought we were playing a Soulsborne when we went into one cave only to be one hit killed by a giant angry chicken.

Talking of death, when you get further into the game you’ll die fairly frequently if you overstretch yourself and your thread back to your last save is a lengthy run. The worst thing is you don’t get the option to immediately revert to your save, instead being bumped back to the town doctor. You’ll either get the nurse who lightly chides you for not being careful or her husband who’ll take a quarter of your money as fees. 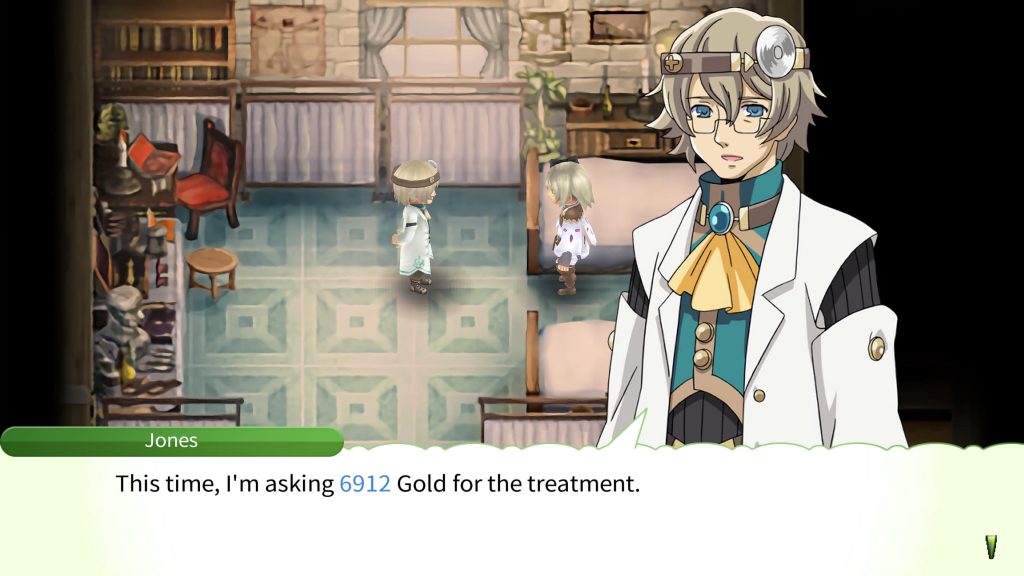 In the nurse’s case, you’ll use it as an opportunity to clear out your no doubt cluttered inventory, but in his case, you’ll be quitting out to the XMB and restarting to load your save again. You can also quit to menu if you’re at a save point, but it’s just as quick to kill the game altogether. It’s a solution to a problem that really shouldn’t exist at any rate.

Even the request system with which you curry favour with the villagers is better implemented elsewhere. Yep, Stardew again. It’s almost as if Eric Barone was a huge fan of the other games in the series and decided to make his own take with all the refinements we’ve mentioned. It’s impossible to not make the comparison if you’ve played both as much as we have.

At the outset you can only carry out two tasks in a twenty four hour period. This eventually increases to three a day, but it makes for glacial progress when you’re trying to make friends, platonic or otherwise. This is exacerbated by the fact that during the extended tutorial phase your tasks are locked down in teaching you what to do. 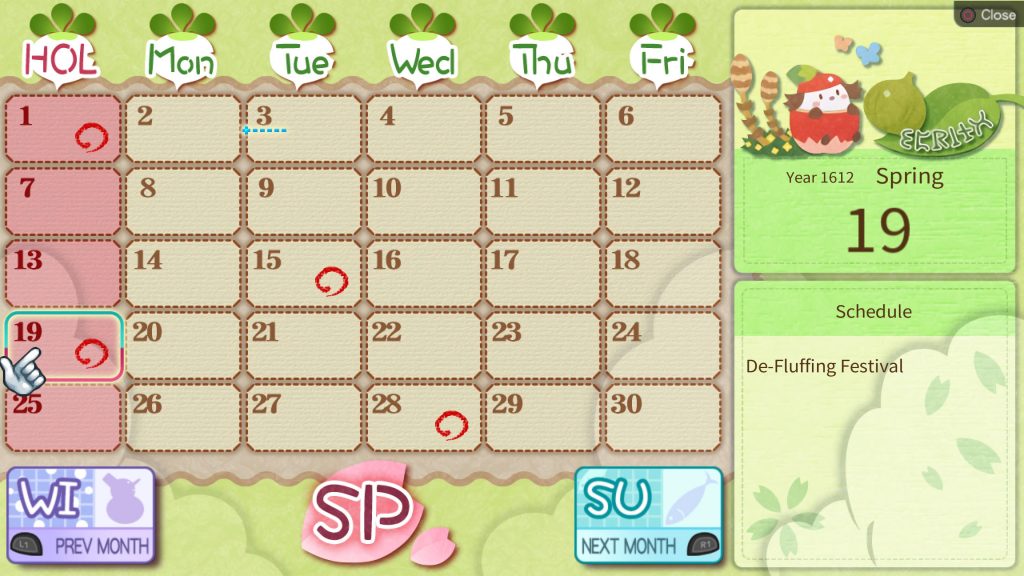 Weirdly, all the trophies are tied to the festivals in the game rather than significant events in the storyline. For us, this made for minimal motivation to actually bother exploring much. Regards the story, the first phase of boss fights lead to the respective monster actually being an ‘earthmate’, though it takes a while for this to be explained. Practically, defeating them unlocks more NPCs to wander around the town. We got a little confused when it first happened, but after it kept happening we sort of rolled with it.

Going back to the festivals, some are hardwired calendar events,  but others are only available on request. Quite why you have to request them when their dates are fixed in the calendar regardless, remains a source of bafflement for us. Like we said earlier, Rune Factory 4 Special assumes you’re in for the long haul. 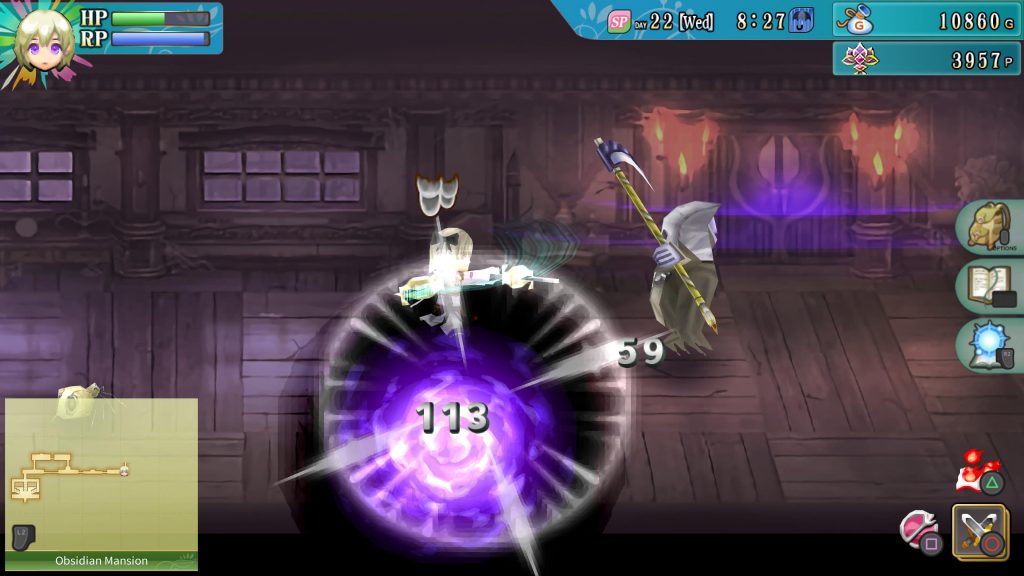 Some festivals are self-explanatory like the one in which you fish. Or the one where you are sheep shearing. But others like the Beach Festival don’t seem to be much more than an opportunity to put all the cute anime girls in bikinis. It’s not quite as overt as the Senran Kagura series or Kandagawa Jet Girls, but it is a glimpse into waifu territory we weren’t entirely prepared for.

It might seem like our review has a negative tinge, but for the most part Rune Factory 4 Special is sound. The combat is good, fishing is fun and farming is generally good.  But for whatever reason we don’t feel to compelled to put in the hours that are expected. Perhaps this is down to the fact the core gameplay loop is better suited to being sat on public transport playing your DS or Switch rather than on your TV. Heck, this’d work just as well on Vita.

In conclusion, Rune Factory 4 Special is a fun action RPG with a farming angle, but it is let down somewhat by unrefined mechanics and the fact that it wants you to play it at the expense of all other games. The rough edges make this a tough ask unfortunately and just make us yearn for a more tuned experience.

Cons
- A lot of what this does has been done better elsewhere
- Initial tutorial phase is unskippable. It gets old if you're running multiple saves
- Very drawn out in terms of expecting you to play multiple in-game years
- You can save mid-dungeon but upon dying you don't get the option to resume there
- Core gameplay loop is better suited to gaming on the go

Summary
Rune Factory 4 Special is an updated version of a 2012 3DS game and while it's a faithful recreation, it's let down by some clunky mechanics and the fact it's better suited to mobile play rather than sat on a couch.