From developer The Bworg (aka Paris Joachim-Farrow) and prolific indie publisher Ratalaika, comes Ten. Or to give it it’s full name,  Ten Rooms, Ten Seconds. So you’ll excuse us if we stick with Ten. The title is pretty indicative of what to expect.

You’ve ten seconds to survive ever more complex death gauntlets, at which point the exit gate opens and all objectives are done. Or in the case of the timebomb, it explodes and you die. You see, Ten is hard. Like nails hard. We played without enabling easy mode for a good hour before we realised we were on to a hiding to nothing. 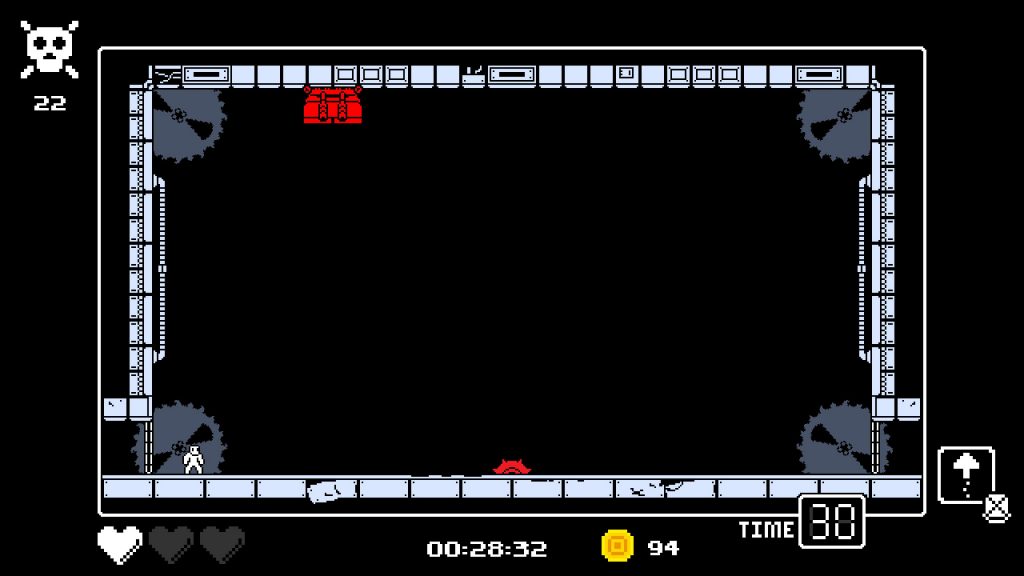 We didn’t even reach the mid-level boss, that’s how often we dusted ourselves off and tried again. It was only when we checked out a much frequented trophy website that we realised we were making our life far harder than we probably should have been. It transpires if you start the game in easy mode, you can actually enable invincibility in the mid-level hub section. And by doing so you don’t lose the ability to unlock trophies and make progress as you do so. Sweet mana for trophy hunters then and quite handy for us taking screenshots for our review. 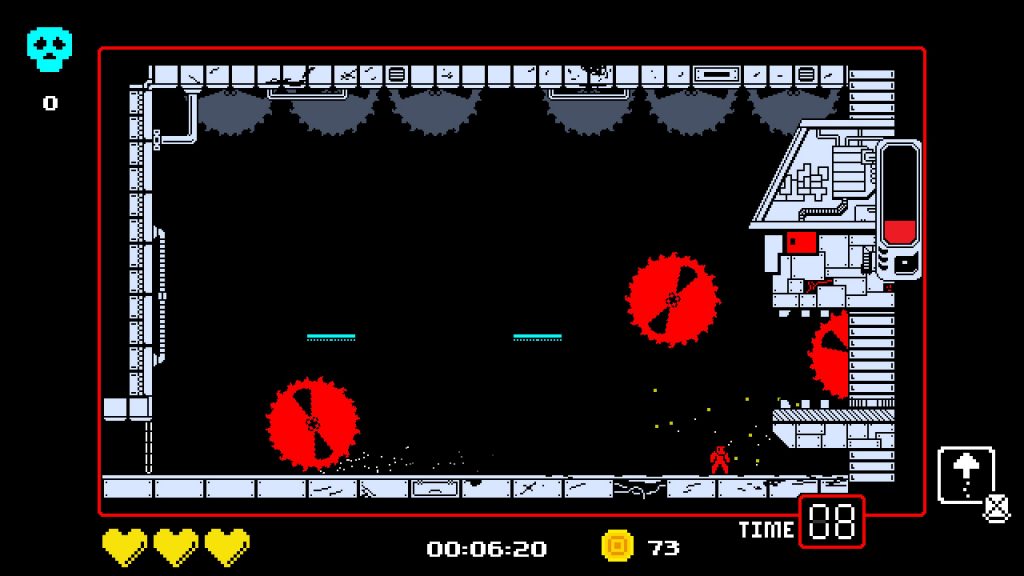 As we said, Ten is hard. So perhaps an invincibility option you can toggle on and off at will is a good thing. But it’s also a sop to those players that cuss out Ratalaika on Twitter when trophies aren’t as easily unlocked as they might expect. If you’re really dedicated you could grind through level by level,  but we found this to be quite the thankless task, especially given your health in the normal stages carries through to the boss fights. If you die in a boss fight, you’re bumped back once again. Then complacency sets in and you start making dumb mistakes on sub-levels you really ought not to be troubling yourself with. 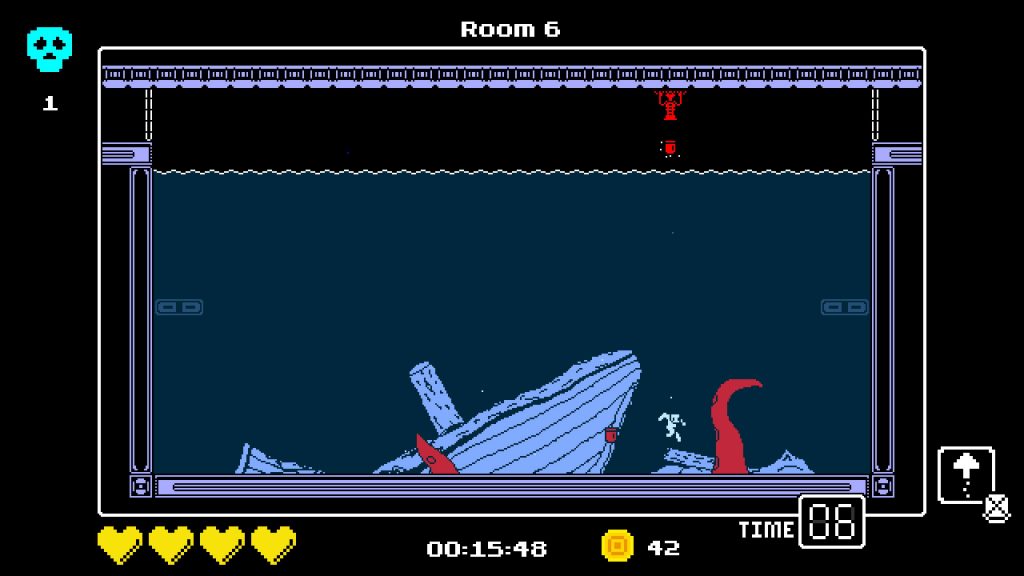 Practically, we found ourselves playing legit with invincibility enabled, but very much trying to avoid enemy attack patterns. All we can say for anyone determined to not take the easy platinum, good luck with that. We can very much see what the dev set out to do, but when we failed repeatedly to even finish the first ten levels, we have to concede that perhaps our aging selves aren’t quite the demographic for this. Even when we got to room eight with a heart intact and were able to backtrack to a room to replenish our three hearts, we found it tough sleeding.

Graphically it’s all pixel art and very clear to look at, though the screenshots don’t really do it justice. In motion you’ll face all manner of gauntlets that seek to end you in short order, so you’ll excuse us if the bulk of our screenshots are with invincibility enabled as it was the only practical way to get shots otherwise. 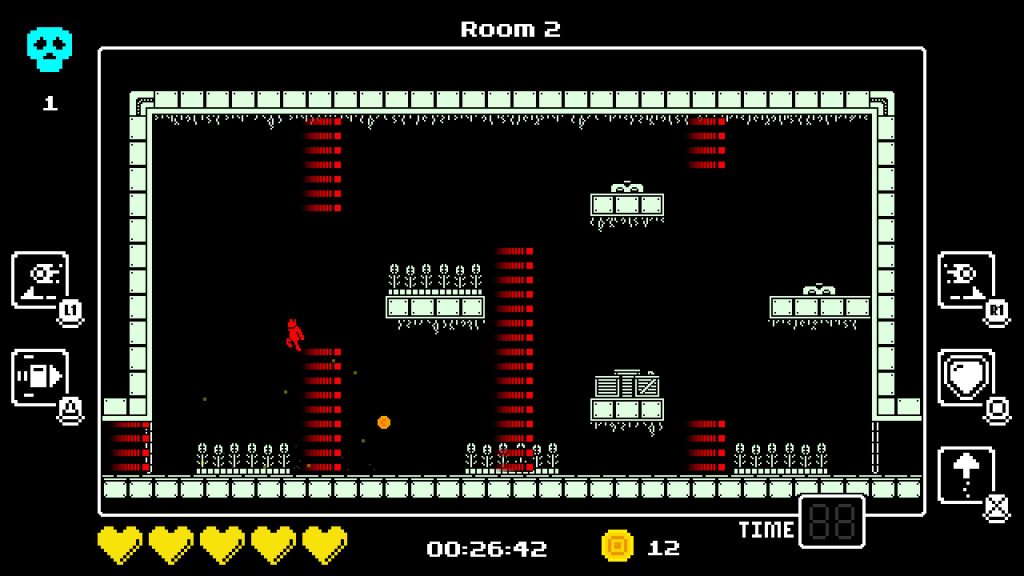 One daft bit of UI design that caught us out was when we sought to resume our normal playthrough after a break. Only rather than ‘Continue’ being the default option, ‘Break Free’ is the default. And while it warns you that it’ll wipe your save after the tutorial section, it lies. It wipes it anyway. A bit annoying, especially if you’re looking to play legit.

In conclusion, Ten is a harsh death gauntlet on normal difficulty but a complete rinse for trophy addicts who opt for the easy platinum. Don’t just plough through on easy with invincibility to start with, give it a go to see how you get on otherwise. You can toggle invincibility at the hub of each set of ten, we’d recommend you at least give each set of levels a crack first without it enabled.

Cons
- Perhaps just a tiny bit too harsh otherwise
- Easy mode with invincibility makes this an outright cakewalk
- Default option in the start menu wipes your prior save
Summary
Ten is a death gauntlet of unrelenting harshness reduced to a fluffy kitten by a far-too-easy to access invincibility toggle. Play it without that enabled first to face a decent challenge.