Very Very Valet is a co-op party game by LA-based coders Toyful Games that taps into a recent-ish sub-genre of party games where you take manual, task-based labour and turn it into a frantic co-op game.  We’ve seen it with catering (Overcooked, Cannibal Cuisine) and house moving (Moving Out, Get Packed) but now we’re looking at the world of valet parking.  Although Overcooked gets most of the credit for popularising this sub-genre these days, Very Very Valet reminds us of where it all began.

In this game you’ve got a steady supply of customers, in this case car drivers who turn up and need you to take their car and park it for them.  They’ll then go and enjoy some time in a restaurant or other establishment before returning and asking for their car back.  If you leave them too long either at the start or end, you’ll lose a life.  Lose all three and it’s game over.  In that aspect, Very Very Valet reminds us very much of the 1983 coin-op classic Tapper. 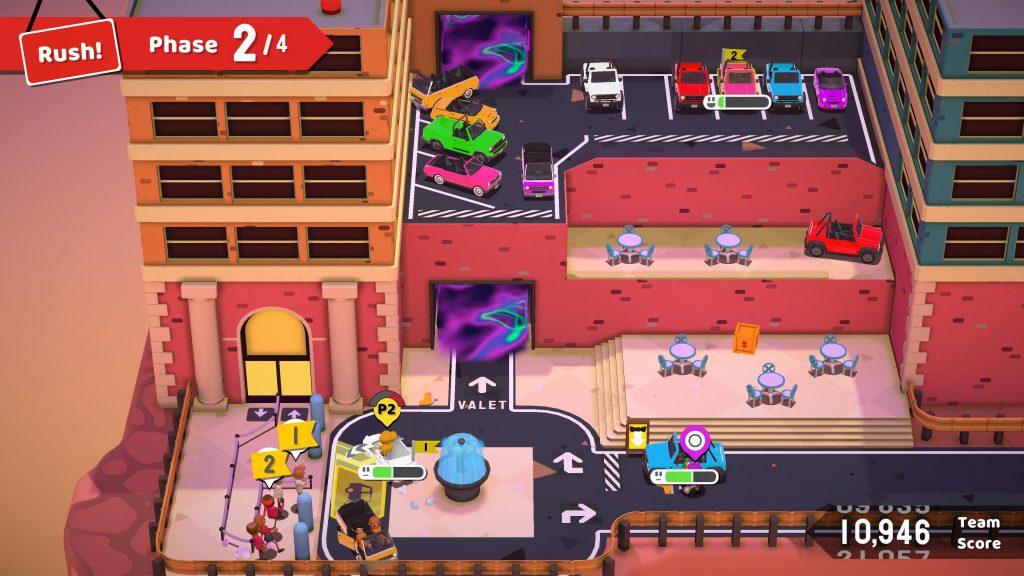 The game starts off quite gently.  Cars show up, you take them to the car park out back and retrieve them as ordered.  The game uses a number system to show you which car belongs to who so it’s always pretty clear what you’ve got to do.  The game uses a directional control system for the driving which is slightly unintuitive but that kind of makes it more fun as it just adds to the chaos without ever being unplayable.

The main mode here supports one to four players and is set across over twenty levels, each one offering a different layout and some surprises.  If you’ve played any of the games we mentioned in the first paragraph, you’ll know what to expect.  New elements are added as you go along with teleporters, elevators, obstacles and hazards mixing up the gameplay and adding to the chaos.  However in some of those games the added complexity took away from the fun at times but that’s not the case here as generally we found ourselves enjoying each one of the stages, frantically trying to square away cars while inadvertently blocking the way out for everyone. 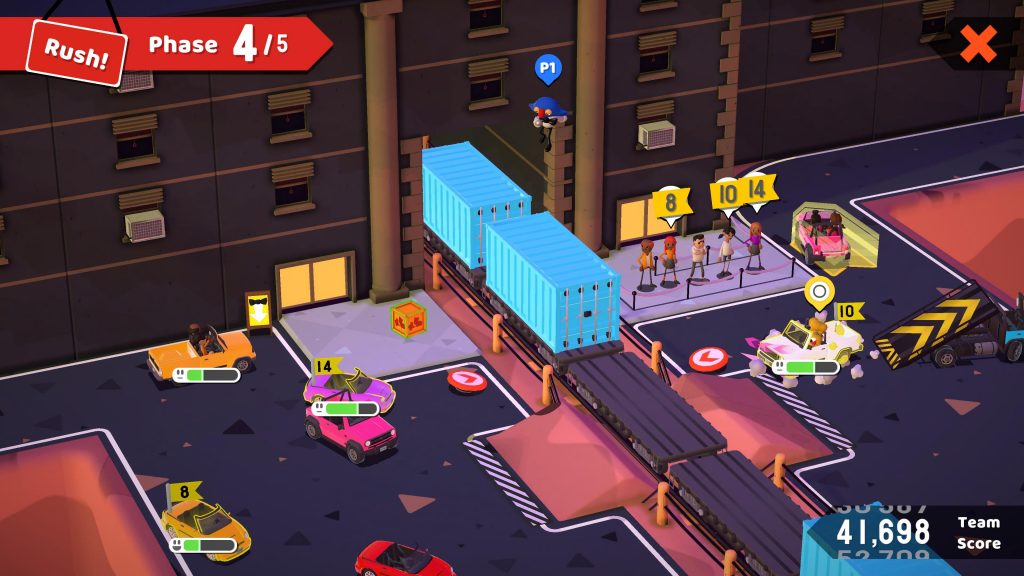 Sure, there’s been a few of these types of games recently and it really does live or die based on your ability to pull together gamers off-line (which gets harder as you get older, as does trying to convince gamers to try something new and silly rather than just firing up FIFA or whatever your go to couch game is) but the simplicity of the concept here and the fun level design really worked well to keep things enjoyable.  The only issue is that it might have been a bit too kind to us as we were able to complete almost every level first time.  However, there’s plenty of scope for replayability if you want to attempt to get the three star rating on every level.

To add to the package, there are also bonus levels in the main campaign where you either knock over bowling pins, sweep up dirt or collect garbage bags and these are generally good fun too, especially when they combine all three tasks.  There are also two other modes outside of the campaign.  One is a standard racing mode on looped tracks and the other sees you trying to barge each other to your dooms.  These are fun little distractions too. 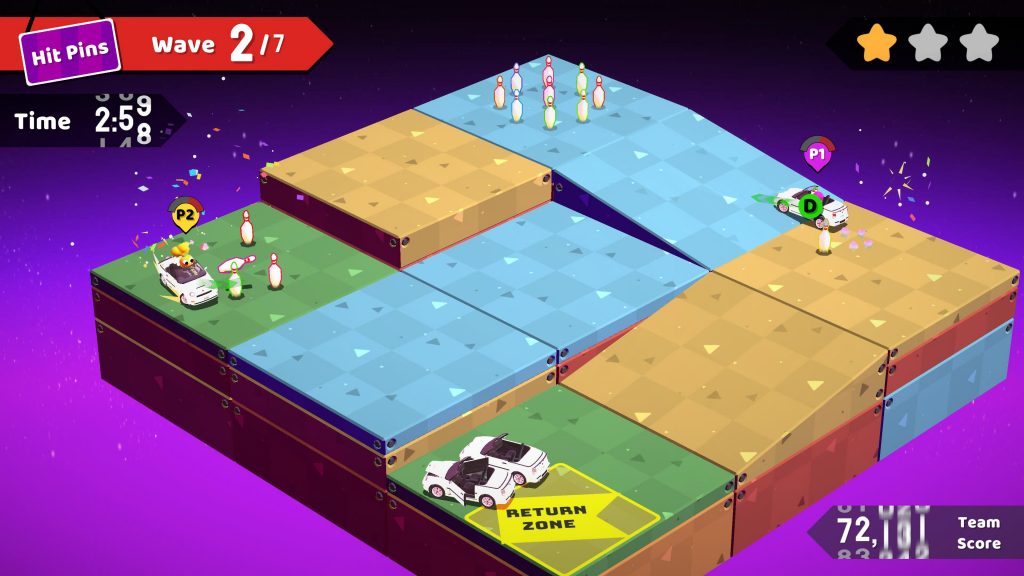 We were quite charmed by Very Very Valet.  It takes a simple concept and runs with it but never over-complicates things.  You’ve got a degree of flexibility within its mechanics too so, for example, you don’t have to park cars safely or within parking bays.  Instead you just drive them vaguely where you need them to go and then dive out while they are still moving so that you can do the next thing that needs doing.  It makes for a really fun co-op experience where we found ourselves actually laughing pretty frequently.

The presentation is what you’d expect from this sort of game with bright, colourful, cartoony visuals that aren’t too complicated.  It allows for the action to remain clear and easy to read but doesn’t exactly count as eye candy.  This is very much a lower-mid range budget game when it comes to how it is presented but it gets to the point and that’s what matters.  The music is a little irritating too and the cut-scenes aren’t voice acted (although they are pretty funny) but none of that really matters. 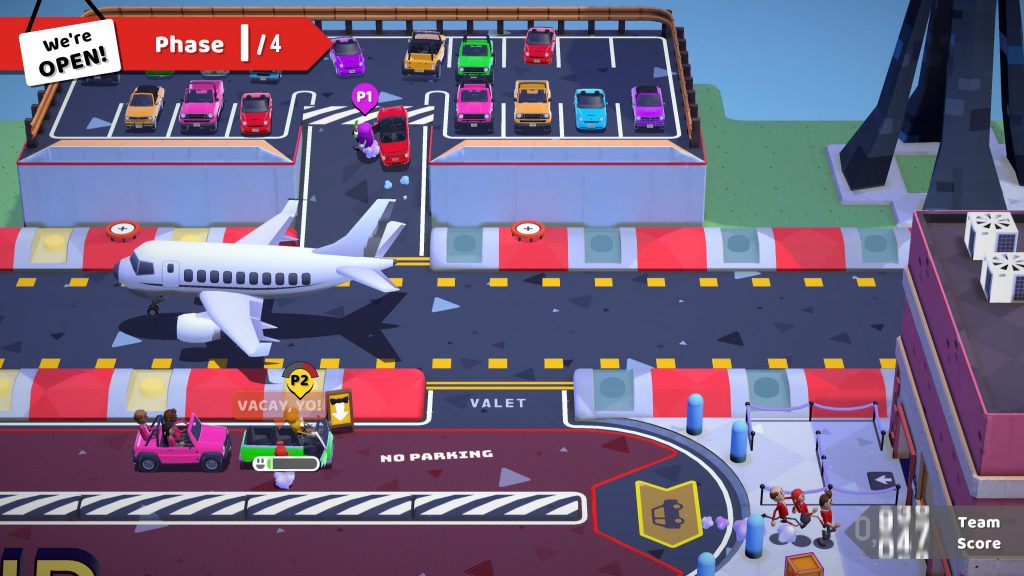 Of all of these recent task ’em ups, while Overcooked is arguably the most stylish and professional, we think that Very Very Valet might just be the most enjoyable.  It offers you a fun basic gameplay loop and never gets in the way of it by adding too much.  The only real knock against it is that it is just a bit too easy to complete but if you’ve got some open-minded friends over and an hour to kill, this will definitely keep everyone entertained.

Review 0
8 Overall
Pros
+ Easy to pick up
+ Tons of fun in co-op
+ Frantic action that is genuinely funny
+ Some nice bonus modes/levels
+ Never over-complicates things
Cons
- Presentation is pretty average
- Might be a tad too easy
Summary
Very Very Valet is a crazy couch co-op game that combines frantic pressure with plenty of fun. This is definitely now one of our favourite party games.