Thunder Kid II: Null Mission came out on PC a couple of years ago and now lands on PS4 and PS5 courtesy of eastasiasoft. Grizz reviewed the first game here not too long ago and this seems to very much follow in the footsteps of its predecessor. 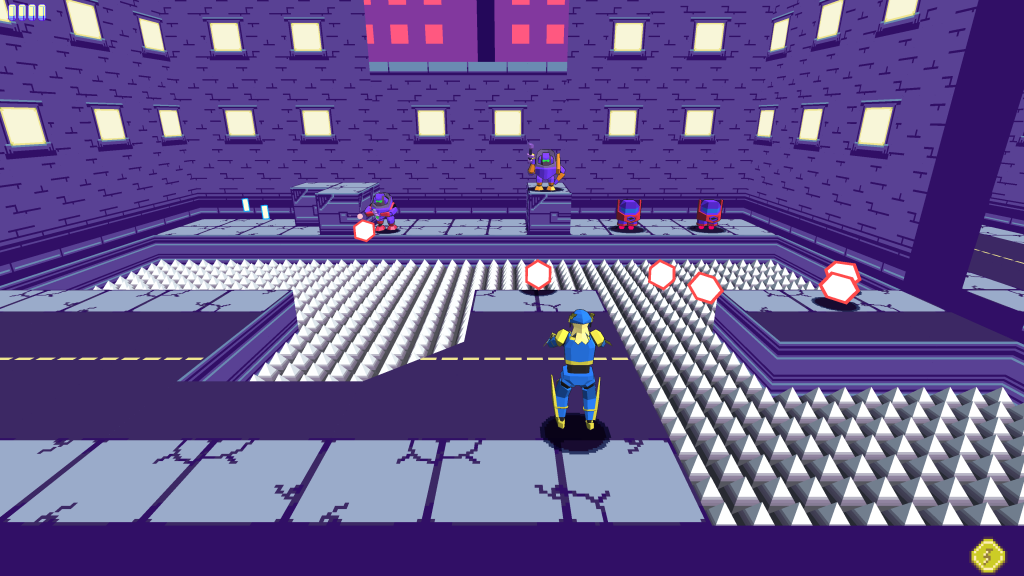 You play as Thunder Kid who must save all the people who have been captured to be sacrificed to the Great Church of Null. There is a surprising amount of text for the type of game it is but it’s all pretty much inconsequential. All you need to know is that Thunder Kid must run through seven worlds shooting and platforming until reaching a boss.

Much like the first game Thunder Kid is controlled from behind and he can run forward and strafe, shooting directly in front of him. Robots will patrol or be stationary and shoot a set pattern of bullets towards the screen that you must evade whilst either killing or simply bypassing them. Enemy bullets tend to out range yours so you’ll have to do some dodging and whilst it doesn’t quite reach bullet hell levels the screen can fill with death at times. 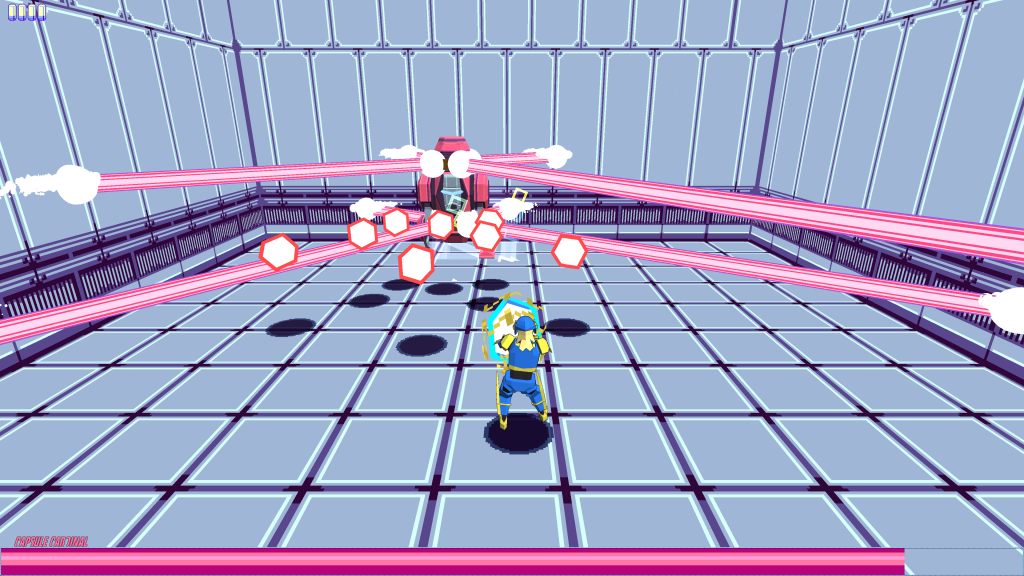 You can take four hits before dying at which point you’ll return to the start of the level or a checkpoint if you’ve hit one. The levels branch in the middle, with normally one path leading to an optional collectible in the shape of an Energy Medallion whilst the other is a little simpler to get through. The collectible only seems to be for the sake of it though, with trophies unlocking for collecting some, otherwise they don’t seem to do anything.

Most stages can be completed in a matter of minutes. I got the platinum in 45 minutes (the final trophy I got was for beating the fifth boss) and completed the rest of the game within the hour. You probably will die but the stages are so short, and have checkpoints, that you won’t be held up for long. Bosses will probably cause the most deaths. Each has two or three attacks which they cycle between whilst hopping from side to side and aren’t too difficult but judging depth is needlessly challenging throughout the game, combined with a very brief window of invincibility after taking damage means being hit once can often quickly lead to another. Bosses take a lot of shots to kill meaning you have to play perfectly for long periods. It’s still not too difficult though. 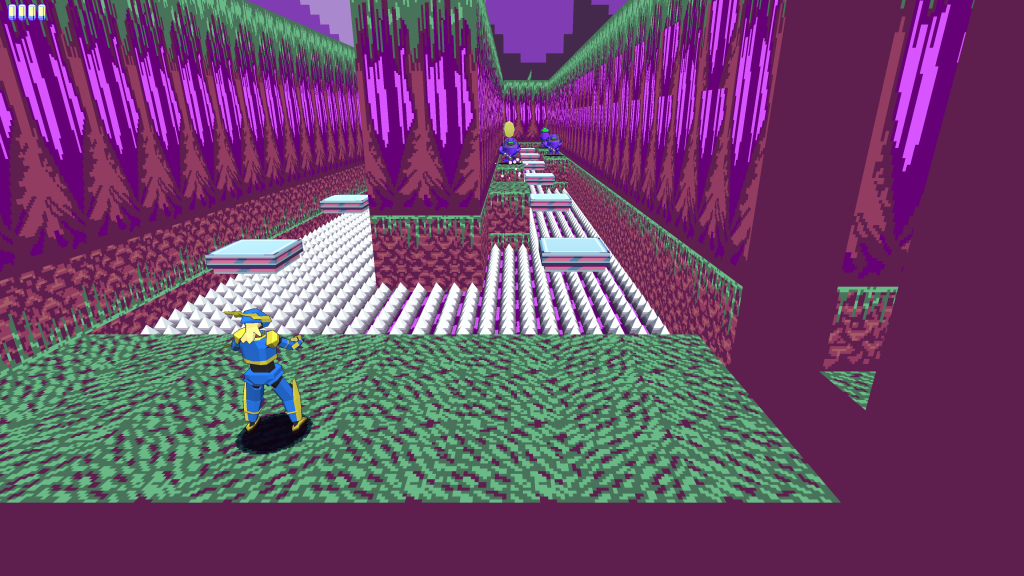 Everything else that was the case with the first game also still applies. That means the visual style is purposefully square and blocky, looking like a less impressive Mega Man Legends on the PS1 a little and the controls aren’t the best. They’re generally fine for what you need to do but the jump isn’t the most responsive and, again, judging the depth on the longer jumps feels clumsy. It’s also worth mentioning the music which is very repetitive and not very good to start with.

I’ll also point out that the third world has swamp water which if you land in you might as well restart from a checkpoint. You sink in it but don’t die and you can jump up to the surface but jumping out of it will sometimes work, but you’ll mostly just be hammering the jump button in vain. It might as well be a soft lock. Otherwise, beyond a stutter every time you touch a checkpoint it ran fine with no crashes. 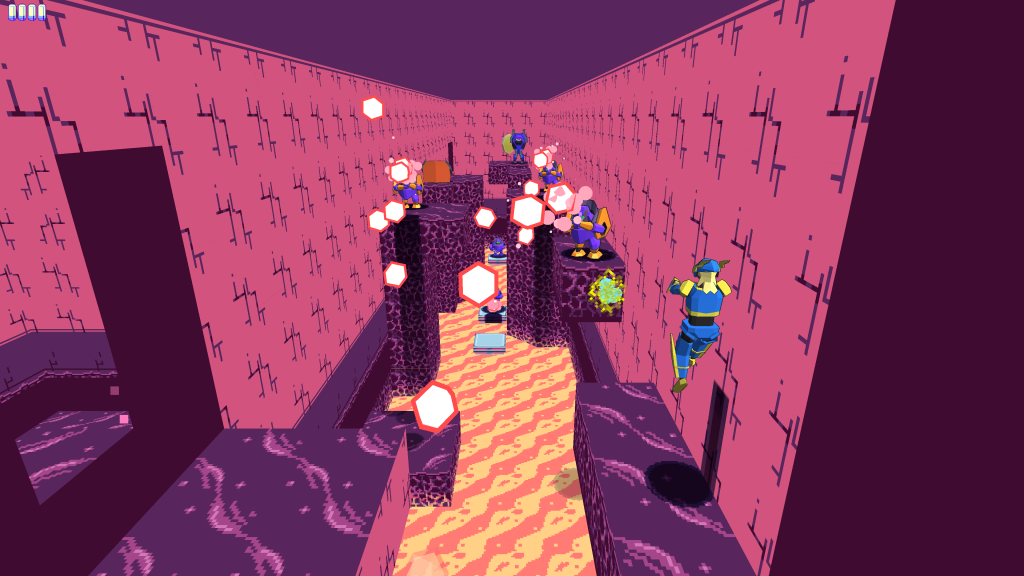 Thunder Kid II: Null Mission is another easy double platinum from eastasiasoft. It hasn’t left a lasting impression on me although whilst I was playing it it was fine enough, but mercilessly brief. It’s relatively cheap but not cheap enough to be a throwaway purchase to my mind. Basically you can buy games that are both better to play and a better use of your time for about the same price, but if you enjoyed the first game then this is more of the same. Or if you just want those sweet plats of course.

Thunder Kid II: Null Mission
5 Overall
Pros
+ Some variety in the limited level design
+ Short
+ Two quick platinums
Cons
- Stiff controls and general gameplay
- Some poor level design choices
- Repetitive, poor music
Summary
Thunder Kid II: Null Mission is very much more of the same as the first game that came to PlayStation consoles a few months back. It's short, a little clunky and you get two easy platinums if you have access to a PS4 and PS5. With more dynamic controls and more interesting bullet patterns you could have an intense gameplay experience, as it is this isn't really worth experiencing.