If you’ve followed the illustrious career of Jeff Minter, you’ll know what to expect from any game that the veteran coder releases and Tempest 4000 is exactly that.

The original Tempest was a 1981 arcade shoot ’em up which placed you on the rim of a cylinder. You could circle around it in either direction while shooting the enemies that travelled through the cylinder towards you. If they got to the top, they would chase you around the rim until you were caught and killed.  It was a fairly simple concept but the 3D vector graphics were pretty fancy back then (anything 3D was in too so developers were doing everything they could do incorporate it) and the game remains one of the original coin-op classics.

However, while the original maintains its status as arcade royalty, it was Jeff Minter’s sequel, Tempest 2000 for the ill-fated Atari Jaguar, that gamers most fondly remember. This brought in Minter’s trademark mix of classic gameplay, bombastic music and retina-melting visuals which became the blueprint for nearly everything he’s done since. 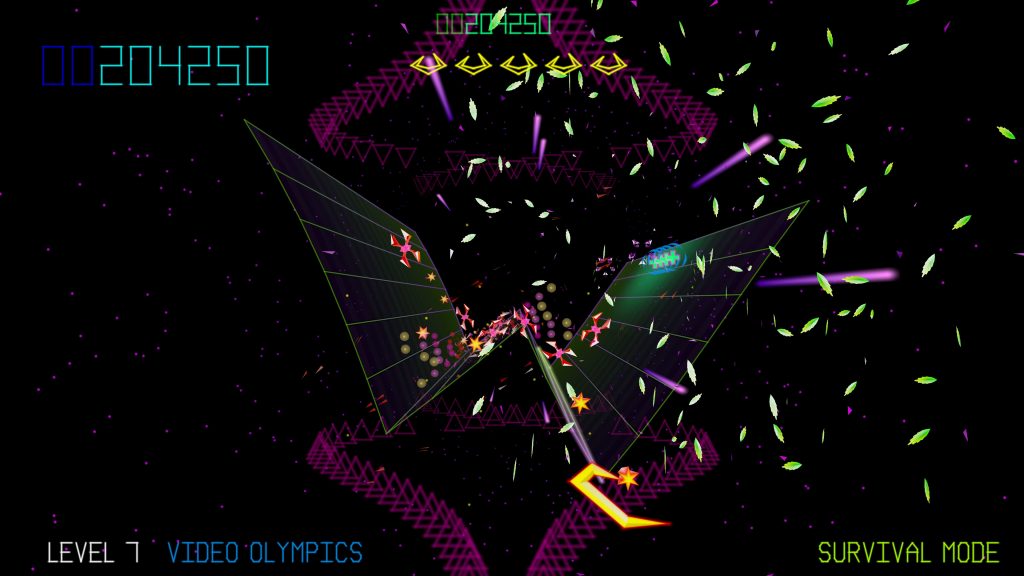 Since then Minter, as part of his Llamasoft studio, has dipped back into the series either officially, with Tempest 3000, and unofficially with Space Giraffe and, most notably, TxK which previously showed up on the PS Vita much to the chagrin of Atari who were a bit unhappy with Minter creating a blatant sequel to their IP. After a few legal wranglings, they sorted it out though and Tempest 4000 is the official ‘big’ console port of TxK.

As expected, the core gameplay here follows the Tempest template. You’re still piloting the ‘Claw’ around the edges of various shapes as aliens crawl forwards towards you in an effort to drag you away to your death and, as per the previous games in the series, you’re armed with a basic blaster as well as a screen-clearing superzapper which you get to use once per level, usually in a last-ditch effort to detach you from a particularly grabby enemy. 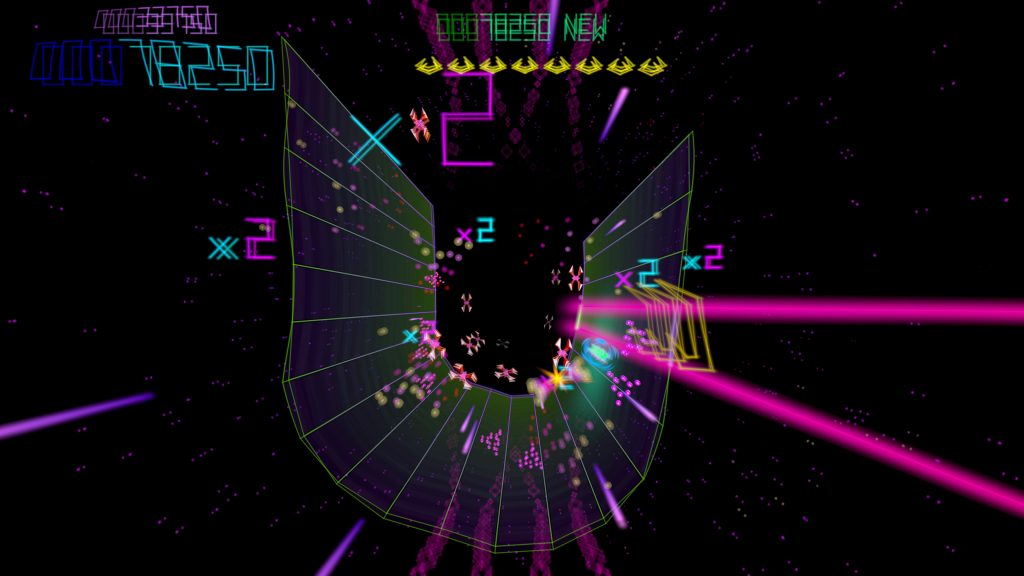 Some enemies drop power-ups and these give you certain abilities in a specific order. The first upgrades your firepower a little while the rest have other effects such as temporary invulnerability, further improved firepower, a one-use jump (which is handy for clearing enemies off of the rim) and an AI drone that targets enemies for you.   Each of the game’s 100 levels then become an intense battle to stay alive long enough to get to the useful power-ups

As per all of Minter’s recent output, you can go back to any level you’ve cleared previously but will start with the number of lives you got there with so there’s a bit of value in going back to previous stages with a view to not dying as much however after level ten or so, you’ll have your work cut out.

Beyond that, there’s not much to say about the gameplay as this is Minter at his simplest and because the game is significantly difficult, you’ll most likely be in full survival mode the whole time which means there isn’t much room for strategy and nuance.  Which is a shame as Space Giraffe, Minter’s Xbox 360 take on the Tempest formula, had much more of a risk vs. reward mechanic and was brilliant for it but that’s not really the case here. 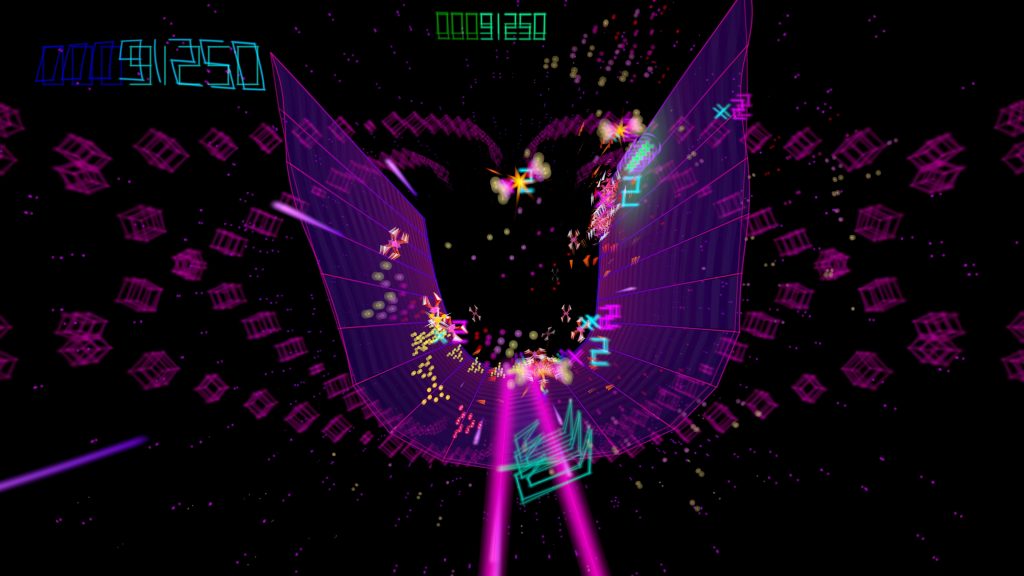 Also, while we’ve always appreciated his use of vibrant visuals, there is something a little bit underwhelming about the graphics in Tempest 4000. This is partially due to them getting in the way a bit. Certain levels in particular are quite hard to decode visually, meaning that you’ll often die but will not always know what got you.   This has plagued some of Minter’s efforts before and has definitely been a problem for me this time around.

And yet with that, the game lacks a bit of personality.  Sure, it looks very Minter-esque but the screens all start to look and feel the same and the quirky English humour we remember from his previous games is really toned down here. 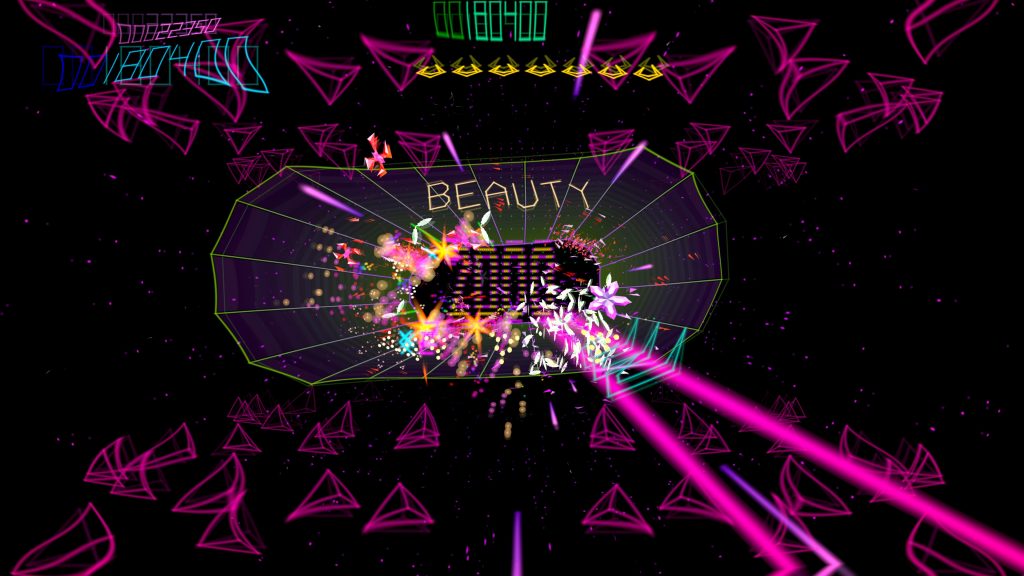 If anything, this doesn’t feel like the work of passion that Minter’s other games have.  There’s something very formulaic here, as if the game is doing just enough to hit the brief but not much else.  From the generic ’90s dance soundtrack, overly purple visuals, occasional bursts of text and the minimalist UI this has the feeling of when a musician puts out an album to fulfil their record contract.  This is also evident in the surprising lack of 3D and PSVR options.

Tempest 4000 is still good, mainly thanks to Minter’s understanding of the genre and his abilities as a coder, but it’s not Space Giraffe good and if better hardware isn’t inspiring better results, it might be time to try another genre because Llamasoft still have so much to offer.

Tempest 4000
6 Overall
Pros
+ Tempest fans will be happy
+ Big presentation
Cons
- Seen it all before
- Really difficult
- Quite expensive
- Visuals get in the way
- Feels dated as TxK came out years ago
- UI is pretty poor
Summary
We want to love this update to the Tempest series but we've seen it all before and it's just not as impressive or fun as we had expected.