Danger Zone 2 is the fourth game from Hampshire-based developer Three Fields Entertainment, a boutique startup by Criterion’s founders Alex Ward and Fiona Sperry who got fed up being a cog in the EA machine. They’ve been around a little while now, giving us the wonderful Dangerous Golf , the PSVR offering Lethal VR and last year’s Danger Zone.

We reviewed Danger Zone last year and while it showed promise,  it was sadly constrained by the artificial crash testing facility environments you played in. Thankfully Three Fields have listened to feedback and implemented real accident hotspots from across the globe for your destructive catharsis. No accident stats for the USA were available so they went with the ugliest junctions instead. Fair enough then. 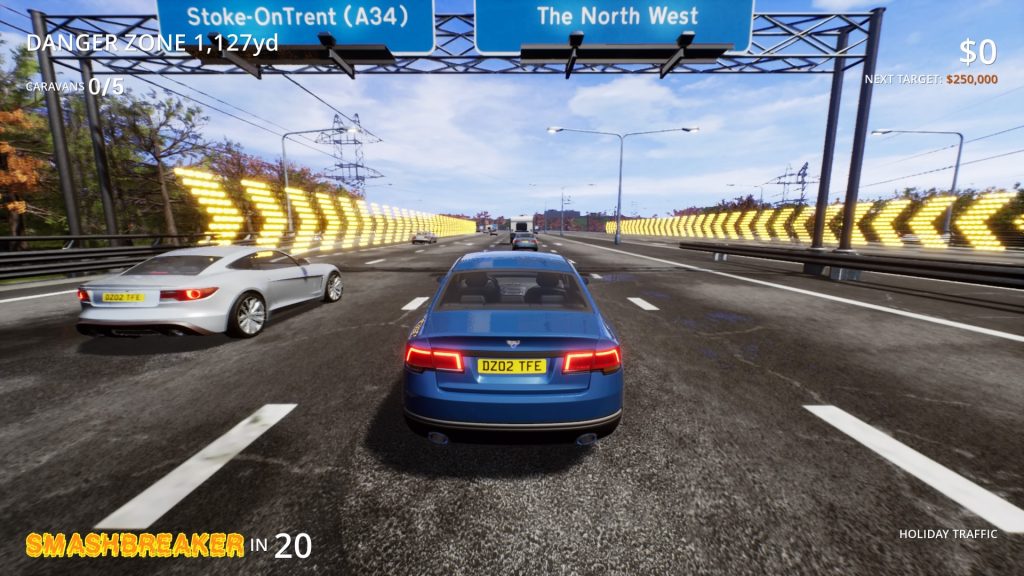 We also get two stretches of the M6 in the UK and some Spanish Autostrada. Upon mentioning this game to a colleague who drives many miles on crap roads, he suggested the A47 out of East Anglia should be included as it is “a hateful road spilling poison out to the rest of England”. Perhaps one for future DLC then? We’d like the M25 too, the junction to the M23/Gatwick being another we’d happily wreak havoc in.

Each crash junction of the twenty-six on offer starts with you having to fulfil a pre-crash objective, be it pushing fifteen vans off the road or chaining three boosts for example. Get these right and you’ll get a score bonus, often the difference between a platinum medal or not.

Classic Burnout‘s DNA runs deep through this game and it’s that game’s Crash Mode fans in particular have been hankering for. But much more refined than we’re used to. Things have moved on a little from the mode’s introduction in Burnout 2: Point of Impact. Given the more focused nature of the crash junctions AKA danger zones you’ll careen into with abandon, Danger Zone 2 hews closer to another favourite of ours, the XBLA effort Burnout Crash. 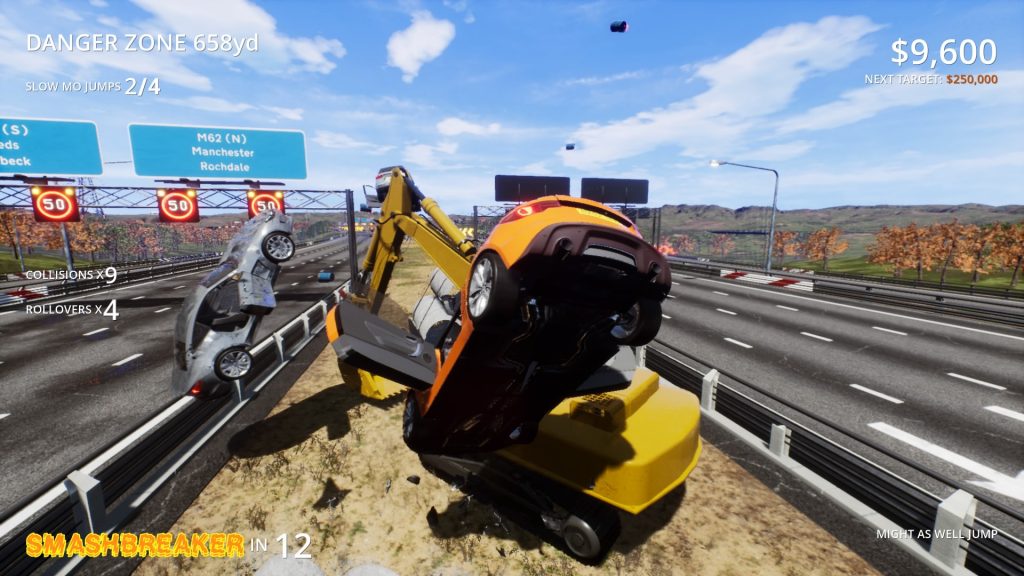 That’s no bad thing as we felt as compelled to get the best possible scores possible on that game and that’s the case here too . It takes a special game to compel you to leaderboard chase with this level of focus and Danger Zone 2 has its claws into us in that respect, just as Dangerous Golf did with this reviewer. In another callback, deliberate or not, one of the trophies you’ll unlock directly references Crash too.

You’ll have the opportunity to drive vehicles of various sizes, the key distinction being a smaller vehicle can be traffic checked by a larger one. If you’re driving the big rig, you’ll vanquish all, but if you’re driving a smaller car you’ll do well to steer clear of larger trucks or you’ll crash out before reaching the danger zone and have to restart. Moreso in the F1 car, given it’s made of carbon fibre and gaffer tape it’ll break if you look at it wrong. Similarly, if you smash through a barrier and off the road, you’ll fail and have to try again. 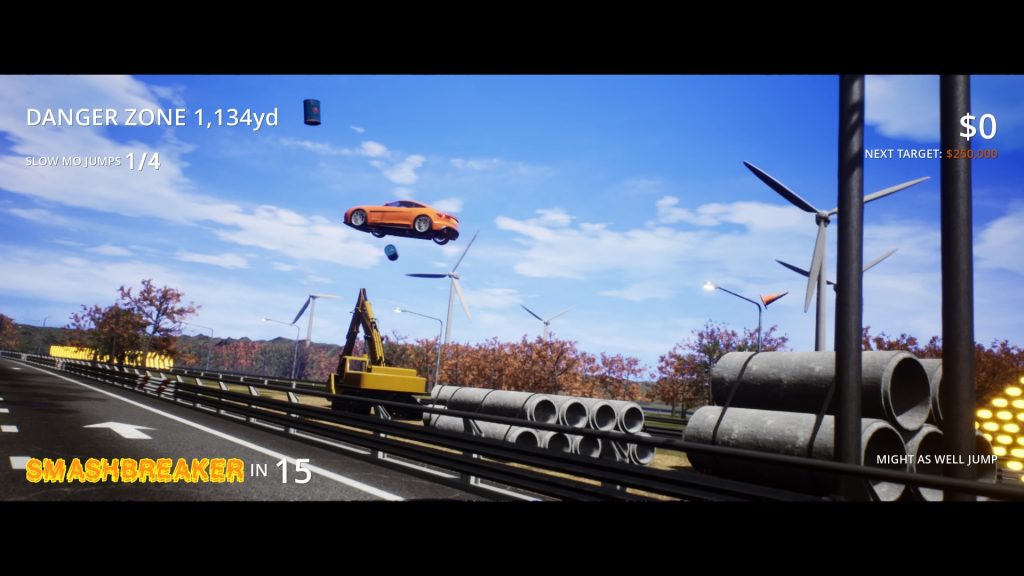 A convincing vehicle handling model ranging from assured in family saloons to twitchy in the chapter ending Formula One car, mean you’ll generally only ever feel that mistakes prior to reaching the danger zones are your fault alone. Some vehicles have a drift mechanic, just as others have a boost mechanic. The latter is lifted straight from Burnout and will be immediately familiar to Paradise aficionados.

Once you get to the actual crash area, you’ll probably be familiar with the way things unfold. Successive vehicle impacts fill your Crashbreaker meter, at which point you can cause your car to explode and pick up any score multipliers you may have missed ranging from a bronze through to gold. In addition you’ll also get the chance for extra Crashbreakers if you snag those tokens too. Crashes are as wonderfully kinetic as they’ve always been, the physics modelling helping keep the game relatively grounded in reality. Well, as realistic as you could expect this to be without actually getting on the motorway and causing an accident yourself. 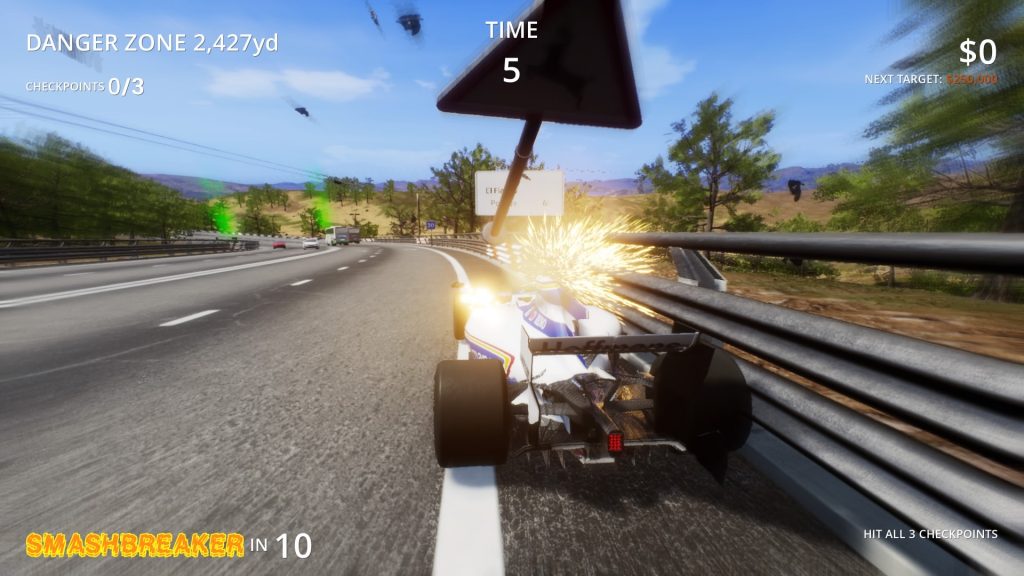 Most danger zones will have multiple lanes of converging traffic. You’ll have to master the art of setting up a pileup in one lane then hopping over to another to set off more chain reactions. One notable junction has you cause havoc across three carriageways of the M6, we think we recognised the area in question too.

Sometimes you’ll have to use ramps to bypass lanes obstructed by roadworks, these give you the opportunity to showboat a little, what the devs call slow-mo jumps initiated by holding

Very occasionally you’ll be jumping from one raised highway to another and you’ll not necessarily twig which way you need to get to the crash zone. Thankfully these incidences are isolated. 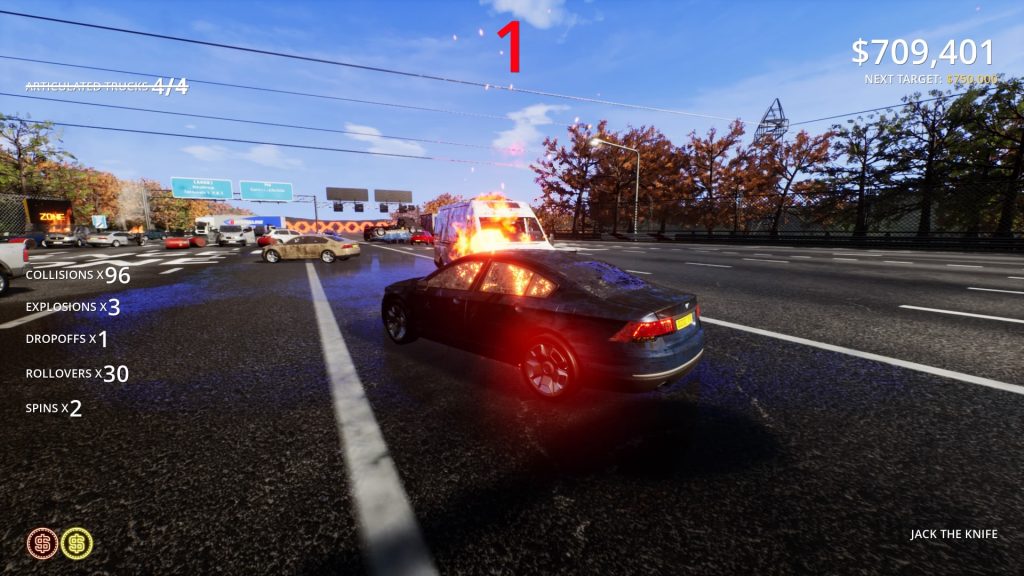 To be honest, the thing that annoyed us the most was the fact the UI text is in a white san-serif typeface. It makes it really hard to read the menu text and leaderboards, especially when contrasted against a sunny highway as it is at the attract screen. Something as simple as the option to change the font colour would immediately resolve this issue. This reviewer has doesn’t need glasses, but can imagine those with any kind of visual impairment will struggle much more.

We said in our original Danger Zone review that we wished the game offered you the option of a choice of vehicles and the ability to trigger catastrophic events like in Burnout Crash. That still applies here, but we can understand to some degree that for a developer with relatively limited resources, that would’ve just been icing on the cake.

All in all, Danger Zone 2 is a great example of what a developer can do if it listens to constructive feedback and doesn’t pick fights with review sites on social media as others have. Very much an improvement on the first game and it leaves us very excited for the forthcoming Dangerous Driving.