Of the myriad of shoot ’em ups to grace PSN over the last few years, the original Aces of the Luftwaffe was in our bottom three. That was due to it being very obviously a mobile phone game with autofiring and a hell of a lot of grinding. It was completely generic and had no place being on the PS4 in the form it was released in.

So we weren’t expecting great things when Happy Games announced a sequel but we’re happy to report that Aces of the Luftwaffe: Squadron is a vastly improved game.

Following on from the original, the game is set just after World War 2, or at least in an extended version of the war where the Germans haven’t quite accepted defeat. You play as Steve, the lead pilot in a squadron of four and are tasked with taking out the remaining titular ‘aces.’ These are the five bosses who show up in the fifth level of each chapter. 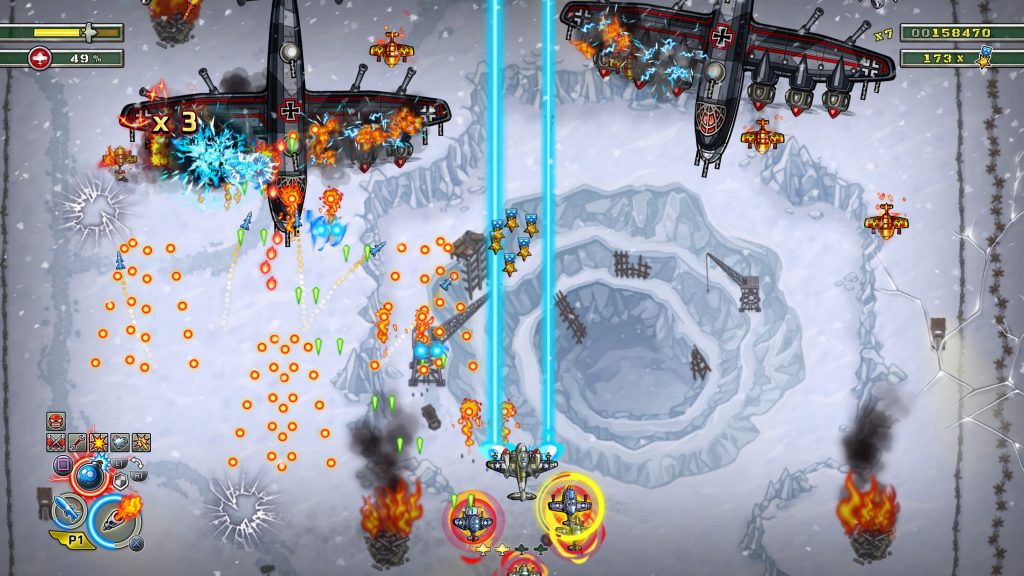 As with the original, this is a vertically scrolling shoot ’em up, although the original game played out horizontally as if it was an iPad game being played on its side, which is exactly what it was. Thankfully this game is properly designed for console play, scrolling upwards but fully using the width of the screen.

It’s pretty standard stuff, with you flying upwards and the majority of enemy forces flying down towards you while flinging a heap of firepower your way. What makes the game interesting though is that you are controlling a squadron of planes.

Well, kind of. You pilot Steve’s plane while the other planes stay in formation with you, boosting your firepower. In local co-op, up to four players can pick a plane each which is an excellent idea. 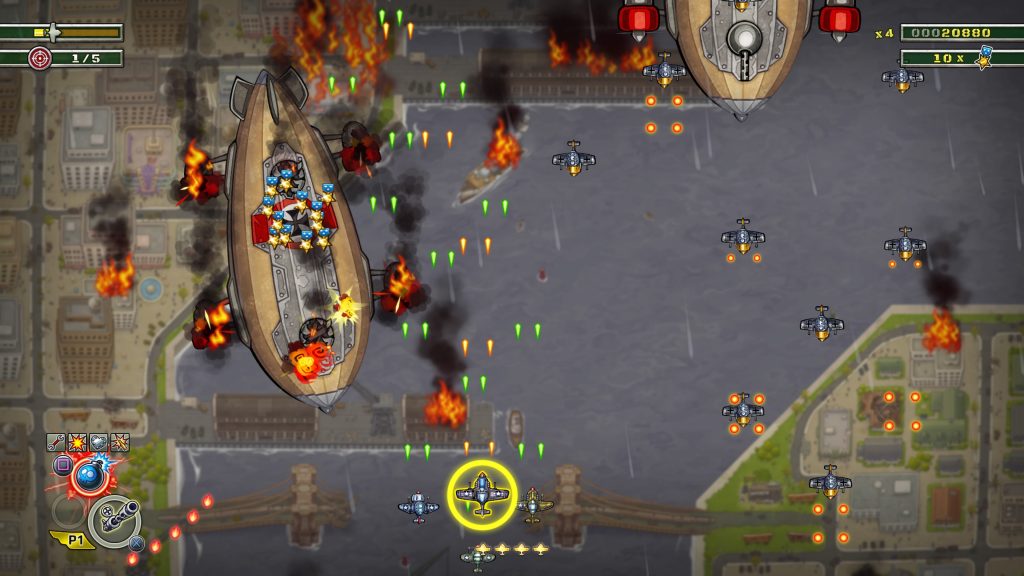 What Squadron lacks is the precision of your typical shoot ’em up. Where we’re used to a couple of pixels worth of hit boxes, your whole plane seems to be vulnerable here and that’s exaggerated further by having three other planes with you that can also be hit. It makes precision play impossible and instead puts the focus on firepower over finesse which is absolutely fine once you get used to it.

As you play, the game throws in a few interesting wrinkles to think about. Enemies drop medals that can be collected for experience. Leveling up then earns you skill points, as do side missions, which will allow you to buy upgrades to your firepower as well as earning passive and active abilities. 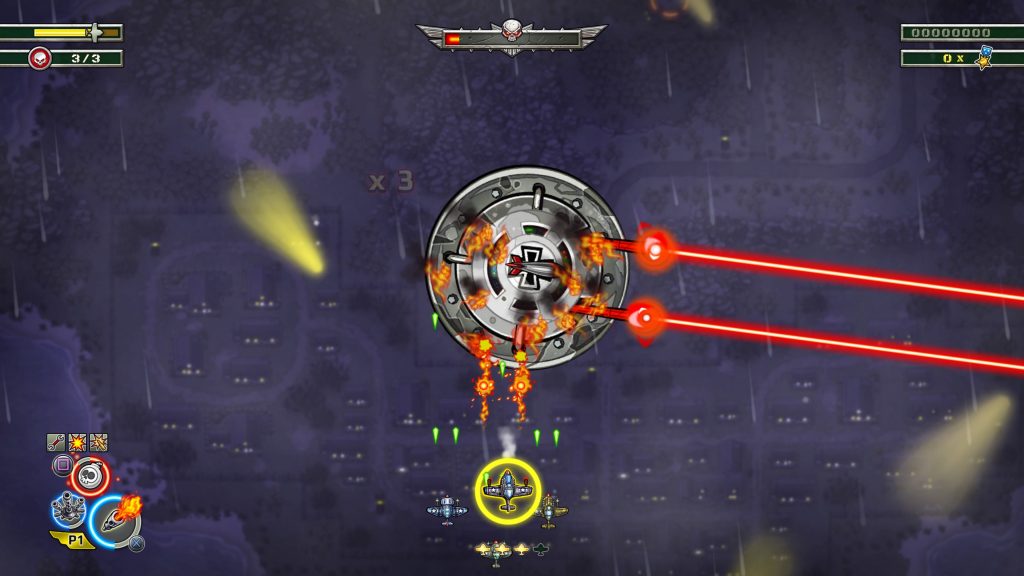 This is all nice enough but the game, on Normal at least, is pretty easy to get through. The last boss is a pig but everything else is quite doable for an average shoot ’em up player like me. The lack of difficulty on some levels makes the game a little bit unexciting as does the lack of explosions in the game. Shooting an enemy just makes them sink down towards the backdrop before breaking up where as a more definitive bit of destruction would have made it all a bit more dynamic.

The best game in the ‘upgrade-driven shoot ’em up on PSN’ is probably Skyforce Reloaded which was a bit more precise in terms of the on-screen action and also the difficulty levels but it did rely on grinding earlier levels which actually gets a bit annoying. This game doesn’t require as much grinding, if any. I did go back to earlier levels for a couple of extra trophies and to find hidden skill coins that I’d missed but aside from that the progress was pretty much constant.

Playing on ‘Hard’ difficulty steps things up though and you’ll need to get those upgrades in place to get through it, so there are options there. 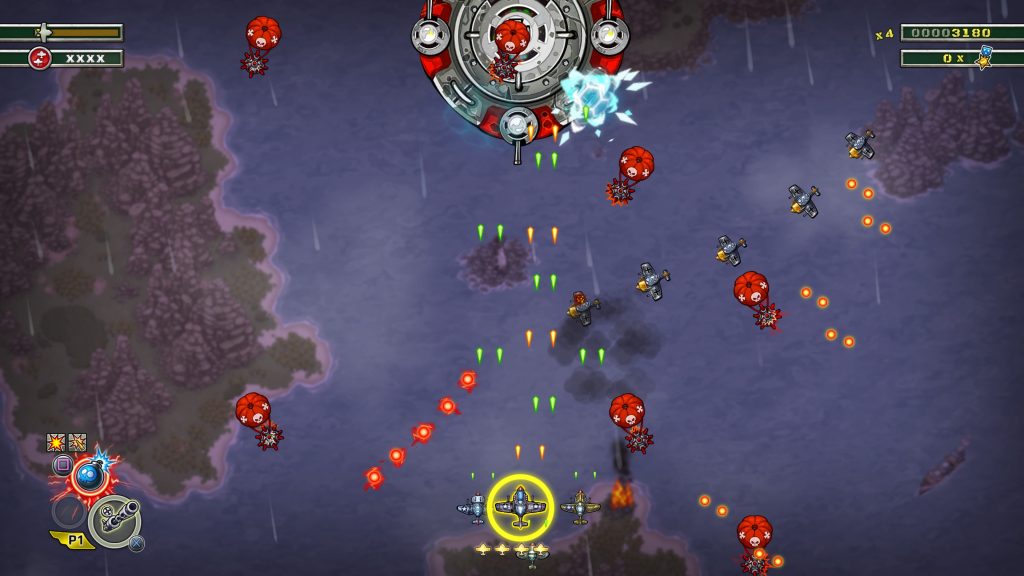 So while the gameplay isn’t perfect, it’s a damn sight better than the original Aces of the Luftwaffe and we’re genuinely surprised, and delighted, to see the improvement. The game also has a lot more character thanks to the story elements and cheery graphics that the game offers. Sure, it still looks a bit like a glorified iPad game but with a bit more attention to detail.

An interesting element is that your four pilots all suffer from some annoying afflictions. One of them is afraid of heights and disappears during battles, another occasionally goes crazy and will hurt you if he crashes into you and your last co-pilot occasionally falls asleep. Your pilot suffers from some sort of blood poisoning which means that during attacks he has to fly slowly. It’s a little contrived but we appreciate any little touches like this as it does help the game stand out a little.

Aces of the Luftwaffe: Squadron is a decent effort and one that massively improves on its predecessor. Fans of old-school shoot ’em ups should check this out but only once they’ve given Jamestown and the Skyforce games a go as they’re probably the best examples of this genre on PSN but you won’t go too far wrong if you pick up this game first.

Aces of the Luftwaffe: Squadron
7 Overall
Pros
+ Squadron/co-op mechanic is interesting
+ Decent upgrading
+ Good boss battles
+ Confident presentation
Cons
- Is a bit easy
- Gameplay isn't as precise as other shoot 'em ups
- Quite short
Summary
Happy Games' Aces of the Luftwaffe sequel massively improves on the original by improving every aspect of the game and while there are better vertically-scrolling shoot 'em ups out there, this is a good example of the genre.