Puzzle games might be the only genre these days that gets my brain in full gear. Not to say that other games don’t have puzzle elements but I do like sitting in front of something that is entirely focused around testing your mental fortitude. System of Souls comes from Spanish developer Chaotic Lab in what appears to be their first effort under the PlayStation Talents initiative. 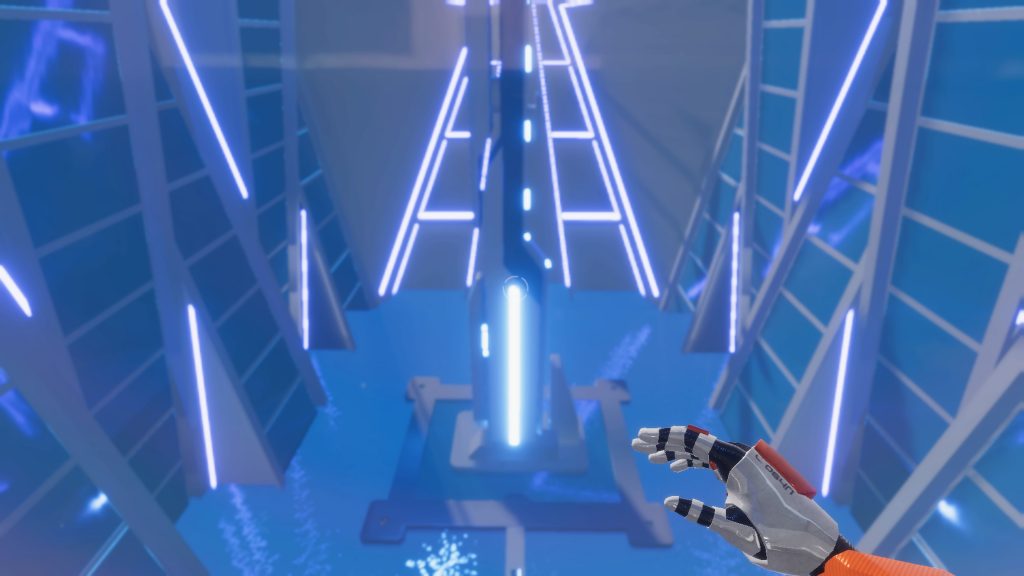 System of Souls‘ setting takes a large slice of inspiration from Portal. Through a nameless protagonist, you aim to clear four floors of a mysterious lab ran by Ion. This corporation seems very interested in your memories and, as our hero Logan only has a name to go on, he’s compelled to test until he gets some answers.

The narrative is drip-fed slowly through mid-floor interludes that tend to act vague, rather than play it straight. It is implied that Logan is human, although your time in the laboratory is spent entirely as a robotic host. I don’t think that’s intentionally obscured. The other individuals you meet appear to be in the same situation. They have stories of their own but it’s difficult for me to really connect with them. You’ll join up with them in the lobby of each floor which, depending on how quick you solve the puzzles, can be a while.

The story is delivered largely in text with some video thrown in to act as Logan’s memories. Maybe some voice acting may have held my attention better but I really could not engage with it. It’s all told by Aura, effectively the AI companion in Logan’s head. I get no personality from it, no charm. The memory segments all just feel so dry and I suspect some of it may be lost in translation. As such, none of it really sticks, even with a narrative as bare-bones as System of Souls‘. 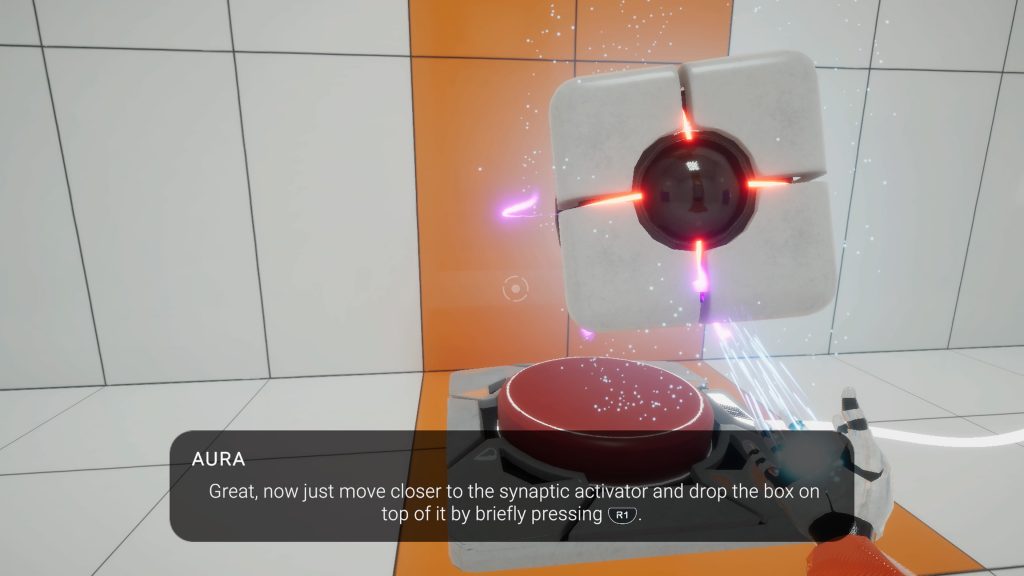 As a game, there’s much more on the table. From a first-person perspective, Logan’s job is to work his way up the floors of the facility. Each floor has six tests to work on and each test introduces more complex mechanics as they go along. Movement is simple enough with the left stick controlling Logan well enough. Where things get interesting is what Logan can do with his robot hands.

System of Souls deals a lot in boxes and switches. The clean, minimalist design of the environment tends to make the objectives fairly clear and, as a lab rat, the biggest obstacle tends to be one of execution. I do like how the puzzles slowly increase in complexity. A lot of consideration has gone into bringing each element together in a smart way. By the conclusion, everything has been utilised and I did find it made me feel accomplished. At the same time, it’s not mind-bending or obtuse. There is a very specific set of skills on display and it’s up to the player to string them together. 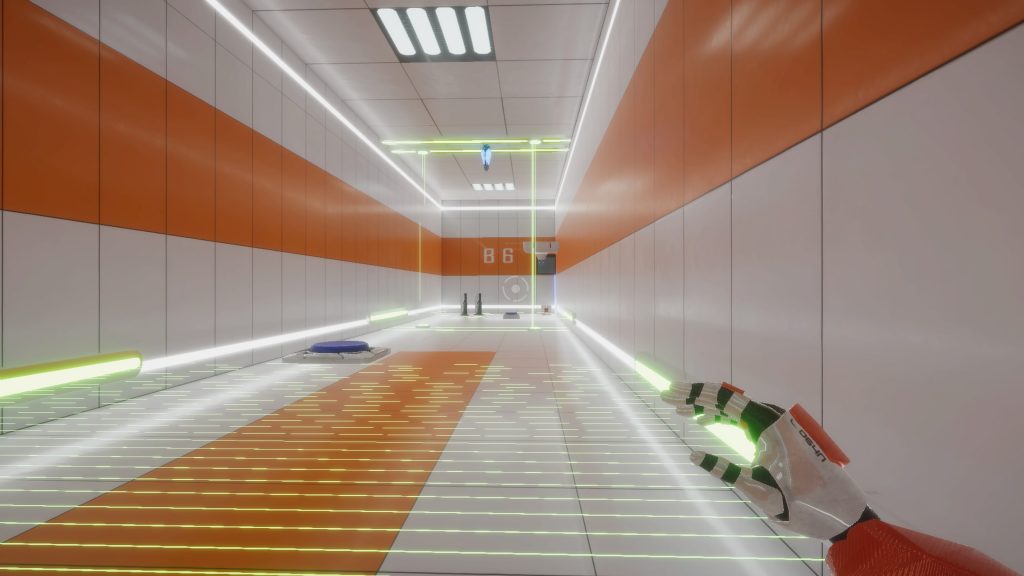 Timing becomes increasingly a concern as you try to make things happen in the right order. There’s an early chamber that requires you to open a path for a moving platform to transport a box. Knowing what to do is easy but getting yourself to the switch whilst setting the box on its way can be an exercise in quick movement. It’s largely forgiving and I can maybe think of one instance where the window required was very tight.

Where issues do arise is with the game’s physics. They generally stay consistent but I’ve noticed boxes are a law unto themselves. The blue ones are light enough for you to tether into Logan’s grateful grasp. Unfortunately, they’re almost as likely to launch somewhere else. Sometimes it’s due to obstacles being in the way but I’ve also seen it happen under no pressure at all. This was particularly frustrating during the longer rooms. I never liked to backtrack in these games and there’s no quick way to reset a challenge. If a box falls into a hazard, it returns to a default position and even that can feel like two steps backward. Physics also can hamper some of the grappling sections. Luckily, the ability to slow down time does allow an opportunity to grab back on and re-centre yourself.

Visually, I enjoy the sterile laboratory setting. All the simple shapes and white lighting give off plenty of nice reflections. Each floor changes the colour motif up slightly and, whilst it’s a look that’s been done to death, I find it still striking. Important elements contrast really well with the floor which is a good way to grab a player’s attention. 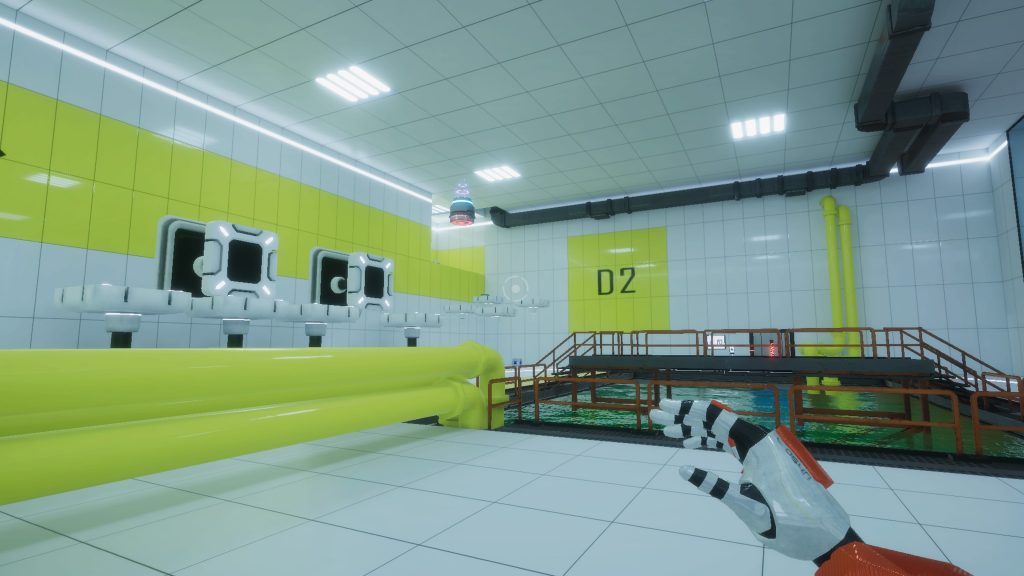 The music rarely moves out from the background with a lot of buzzing ambience that fits well with the setting. There’s not much else to say as the rest of the audio work seems prioritised to give you basic feedback. Nothing spectacular but it does the job. Again, some voice work could’ve really helped the cutscenes and at least added something to a fairly blank cast of characters.

Whilst it did deliver some frustrating moments, System of Souls does feel like a game that mostly succeeds. The puzzles are inventive, smart and the environmental design really helped draw my attention to the things that mattered. The narrative failed to grab my interest but the two-dozen chambers were intriguing and built to a nice showcase of the game’s mechanics. Provided the erratic physics don’t irritate you too much.

System of Souls
7 Overall
Pros
+ Really inventive puzzle design.
+ Sharp, clean looking environments.
+ Enjoyable movement with plenty of options for traversal.
+ Smartly paced with each floor building up to a grand challenge.
Cons
- Moments where the physics freak out are all too frequent.
- No way to revisit individual test rooms.
- A dull, poorly delivered narrative.
- The lack of voice acting can make the journey feel lifeless.
Summary
System of Souls is a clever puzzler that does deliver some tricky and smart challenges. There's not much in the way of deceit, allowing players to see the task ahead and worry about execution. It's not mind-bending but there is some frustration on hand when the occasionally erratic physics intervene. As well presented as the levels are, I found the narrative fell flat and there are definitely times where things can feel very sterile. The puzzles are worth seeing although the lack of a level select does mean replaying can feel a bit of a slog.