From Polish developers Sleepless Clinic comes the new title Symmetry. A survival game that, using a few simple interactions, challenges you to help a crew escape a hostile planet. Challenge is a very suitable word as Symmetry is tough. 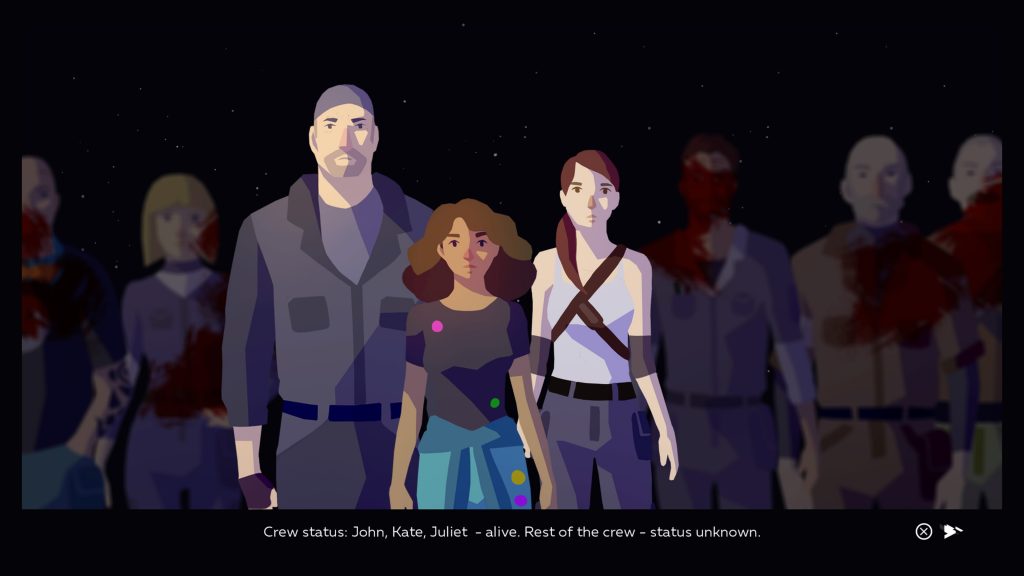 After a brief storyboard you’re given three random characters to start with. Ultimately it doesn’t matter who you’re given though. Everyone starts with some basic stats which make them more suitable at certain tasks. Initially there are only three things you need to worry about: gathering wood, generating food and gathering scrap. Each person’s skill is represented by a bar, the longer the bar the better they are at that job. Gathering wood is important to keep the shelter warm, food is important but you only need it when people are hungry, gathering scrap is super important as it is used to upgrade facilities, repair items that break and fix the things you need to escape and win the game.

To get wood or scrap your survivors need to venture out into the cold. To start with you’ll be looking at temperatures of around -30°C which is fine, your characters wear suits to shield them from the cold and they can do a couple of trips before needing a rest. As the game progresses the weather gets gradually worse with anything below -60°C being suicide to venture out in. Knowing when to gather resources, when to rest and when to eat are the keys to survival. Be too cautious and you won’t have enough wood to keep the shelter warm or you won’t have enough scrap to repair a key item in the shelter or even the generator, making all machines useless. Be too risky and your characters won’t make it back, perishing out in the cold and you’ll be one pair of hands shorter. 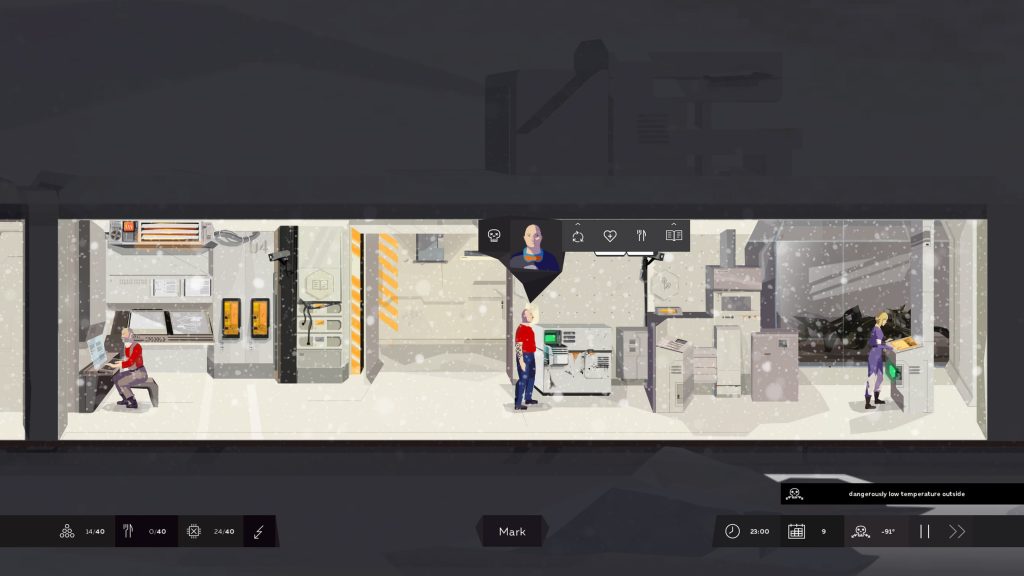 You can improve a character’s skills to a point with a computer, making them better at gathering or teaching them other skills to help other characters with collecting. Items can be upgraded, but only so you can store more resources, you can’t improve efficiency unfortunately.

That is all you do throughout the game. As the days pass the weather gets worse making collecting difficult and the resources get further away making trips longer. New survivors will emerge if you last long enough to give you a hand, and you’ll need them, but all you really want to do is gather enough scrap to fix your ship and escape. Unfortunately the game does everything it can to waste your scrap with the generator going down at least once a day and random items breaking constantly due to earthquakes and the extreme cold. Stockpiling enough scrap is incredibly difficult, especially if you leave it too late. After a certain point it seems characters can’t even survive one trip out to get wood.

As your characters survive they will talk, seemingly to themselves, with you able to read what they’re saying at the top of the screen. This is what amounts to the game’s story, with the character’s thoughts revealing why they’re here, their motivations and what they think about the current situation. The story is okay, told quite well with a strong atmosphere, but it’s hardly original. After my first couple of attempts I quickly learnt to ignore it most of the time. Surviving is what’s most important. 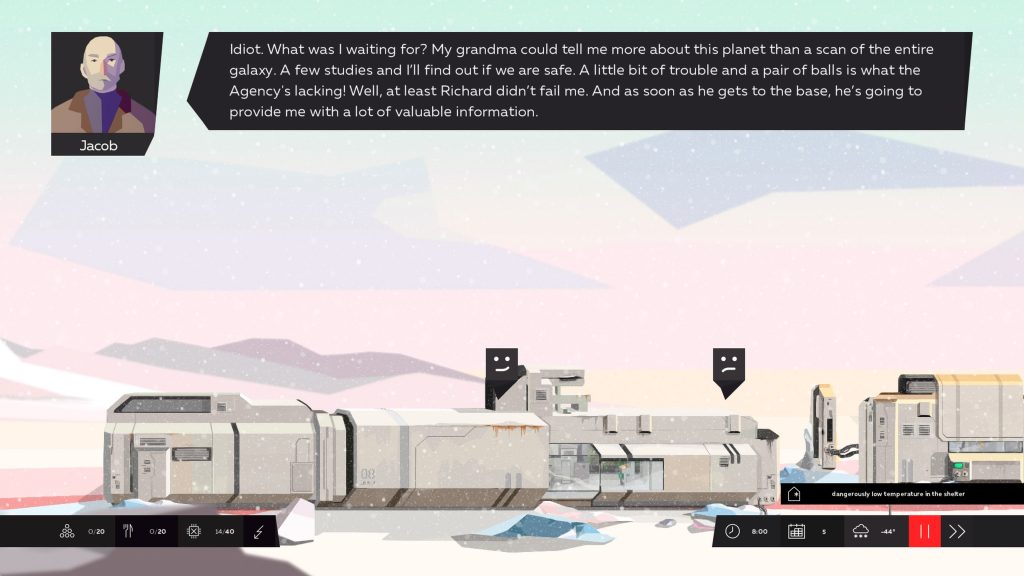 You can pause the action at any time and still input commands which is lucky as the controls can be a little fiddly. You start in a zoomed out view but can push up to get a closer look. In the zoomed out view you can see an emoji over a character’s head, the less happy it is the closer they are to death. If you zoom in and select a character by moving between interactive objects by pressing left and right then you’ll be able to see their tiredness and hunger and give them their commands from a menu. Sometimes selecting who you want can be difficult, especially if two people overlap one another but these situations can be sorted reasonably quickly.

Symmetry is difficult, but I’d say the difficulty is its key component. If it was easier then you’d finish it very quickly and be done with it. There’s not much in the way of gameplay to keep you coming back and the story is just okay. By making the game almost too difficult you have an excuse to replay it in the hope of finally escaping. Each attempt doesn’t take too long (maybe an hour) and the game only has an autosave to stop you from save scumming your way to victory. There are two endings to incentivise you to play it again. 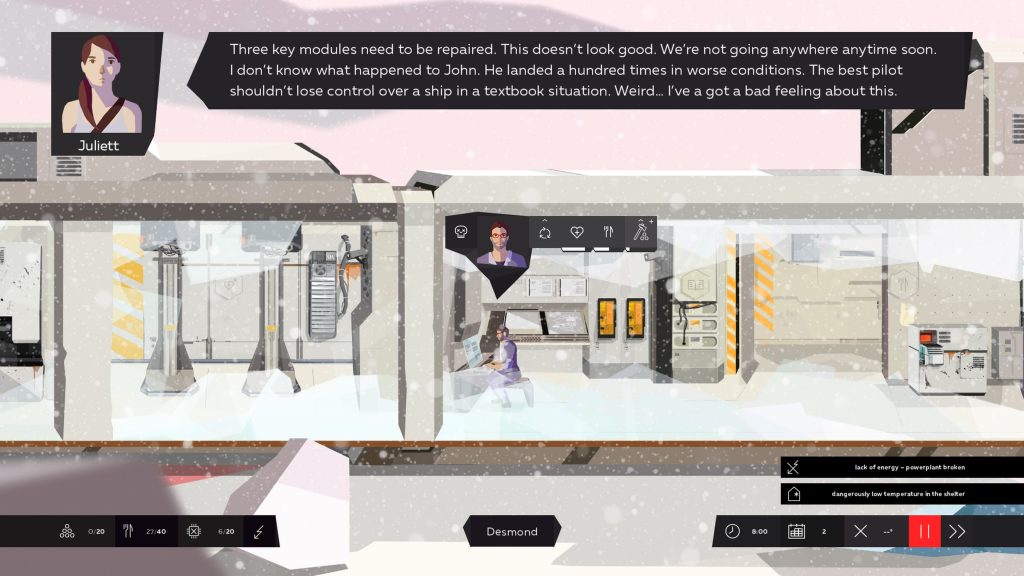 However it’s tough to recommend Symmetry due to its lack of gameplay variety and overly harsh difficulty. Getting that little bit closer to success is quite addictive due to the short nature of the attempts but having a great run quashed by someone who was perfectly healthy when they left dying before returning is incredibly disheartening with often no other option than to start over. Its relatively cheap price might make it worthwhile for those who enjoy micromanaging and resource gathering but be aware that it will punish you and if you do master it then there is little replayability beyond two endings.

Symmetry
6 Overall
Pros
+ Good atmosphere
+ Challenge can be addictive
Cons
- Surprising deaths can end a run quickly
- No real gameplay variety or development
- Controls can be finicky
Summary
Symmetry is a challenging survival game. The gameplay is one-note and never changes or evolves but the struggle to finally escape can become addictive.

One thought on “Symmetry – PS4 Review”