As a fan of immediate, hassle-free gaming experiences I tend to be the reviewer on the PlayStation Country ranch who gets to review most of the shoot ’em ups.  Having grown up in the ’80s arcade scene, nothing makes me happier than getting my teeth into a new one and Defenders of Ekron by Chilean indie studio In Vitro Games definitely counts as one.  However, unusually for the genre, the game also has a lot of plot to get through as well as a few additional gameplay elements that you wouldn’t expect from this type of game.

The plot itself is the usual anime nonsense with teenagers being entrusted to pilot expensive, deadly mechs into battle for some reason but it stops short of being a visual novel or anything that tedious.  It tells the story of Eneas, a young pilot who wants to serve his country and gets the chance to after a few tutorials.  Unfortunately it’s a civil war against a bunch of other tooled up mech pilots.

None of that really matters to me though.  What sets the game apart is the gameplay and what they’ve done with it to play around with the usual twin-stick shooter formula.

Obstensibly, that’s what the game is.  You move with the left stick and aim with the right.  Unfortunately a fire button controls shooting but the game does justify this a little, even though I prefer the immediacy of not having to press one. 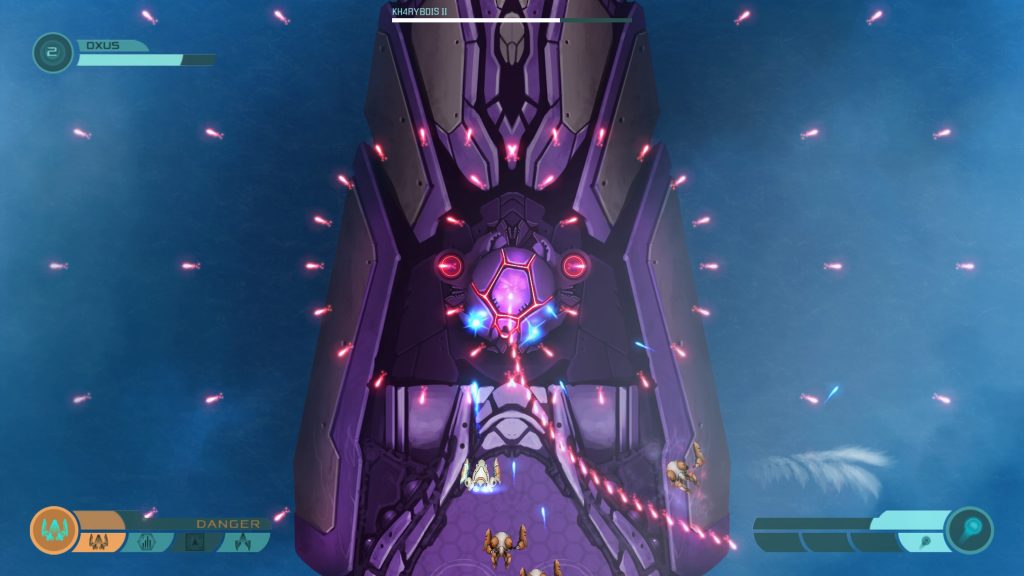 One top of that are a few other mechanics that serve to mix up the gameplay a little and add some depth that you don’t normally see in this type of game.  Holding down

allows you move a cursor (with the right stick) that lets you lock onto enemies and fire off more powerful shots that do more damage to bosses and can travel right through smaller enemies.  These can also be used to trigger attacks that can hit the rear of targets if done correctly.

Hitting both triggers will power on your shield which is easily done when trying to fire off those power shots in combat but for the most part the controls hold up well.

On top of that your d-pad also puts you in other modes that let you scan the area or travel at much faster speeds (which switches the usual movement controls to a rotate and move forward style).  There’s usually a time and a place for every technique the game gives you and while it can mess with the flow of the game, it does keep things interesting.  Especially when you unlock a melee-based mech who can punch out bullets.

In the main game, all of these abilities have to be used.  The game isn’t savagely difficult but does require skill and dexterity to get through, especially with some of the boss battles which can be really tricky to get through, as well as a puzzle-solving, strategic approach which does make this a very thoughtful kind of shoot ’em up.  The game can certainly challenge the player but luckily there is something else you can do to aid your survival but it comes at a cost.

You see, Defenders of Ekron has an interesting upgrade mechanic.  Enemies drop energy that can be collected in your storage tanks.  Fill a tank and pressing

will use up that energy and will heal all of your damage.  Nice.  However, at the end of each level that energy can also be spent upgrading your mech.  Firepower, speed, energy absorption, life capacity and energy capacity can all be levelled up. 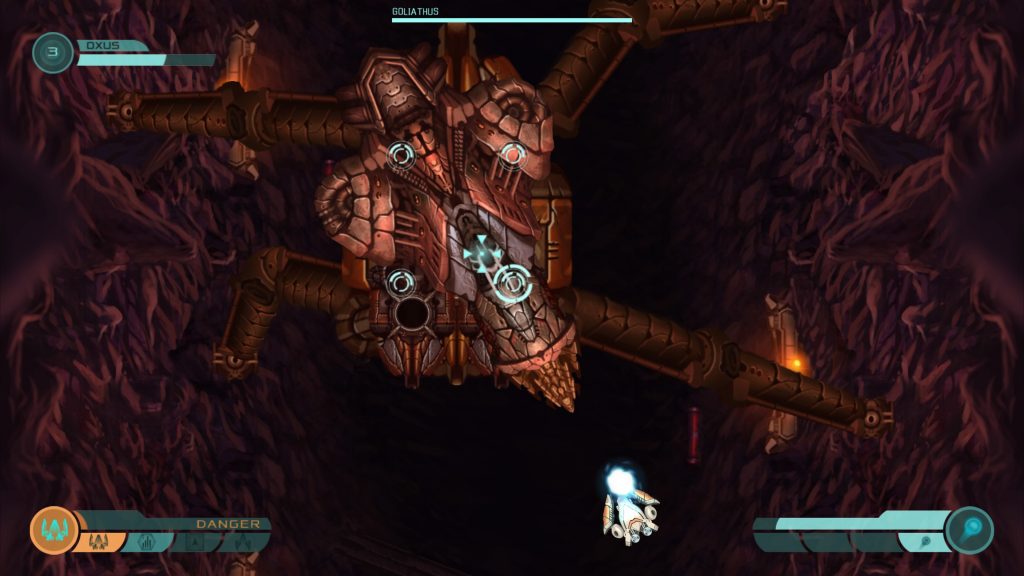 This adds a lovely risk versus reward mechanic to the game.  Sure, you could heal yourself to get yourself through that tricky battle but if you gut it out you’ll have more to spend on improving your chances in the upcoming war.  It really works well although the game can be a little bit mean when it comes to chaining together difficult situations.  But that’s where that extra firepower will really come in handy.

The main campaign does tend to force you to get through more text-based conversations than I’d like but the solidness of the challenge and the clever gameplay mechanics do make up for it.  Also, levels can be a tad too long at times but nothing game ruining.

The game also offers a large number of simulations to try out.  These are small challenges that ask you to take on various enemies with conditions attached such as time limits, bullet limits, not taking damage and so on.  Get through these and they’ll also award you energy that you can spend on upgrades so these are worth playing around with, even if they can be a bit frustrating at times.

Initially, Defenders of Ekron‘s flat 2D anime style was a bit underwhelming for me.  The game looks clean but there’s nothing spectacular to see here and that coloured my view of the game at first.   A lot of the game takes place over a very flat background.  There are moments where parallax scrolling and moments of 3D do occur, so the engine presumably supports that but the visuals generally aren’t very impressive.  With that and the core twin-stick action being a little staid, early impressions of the game aren’t great but when you get your head around the upgrading and the risk versus rewards aspects of it, the game clicks into place nicely. 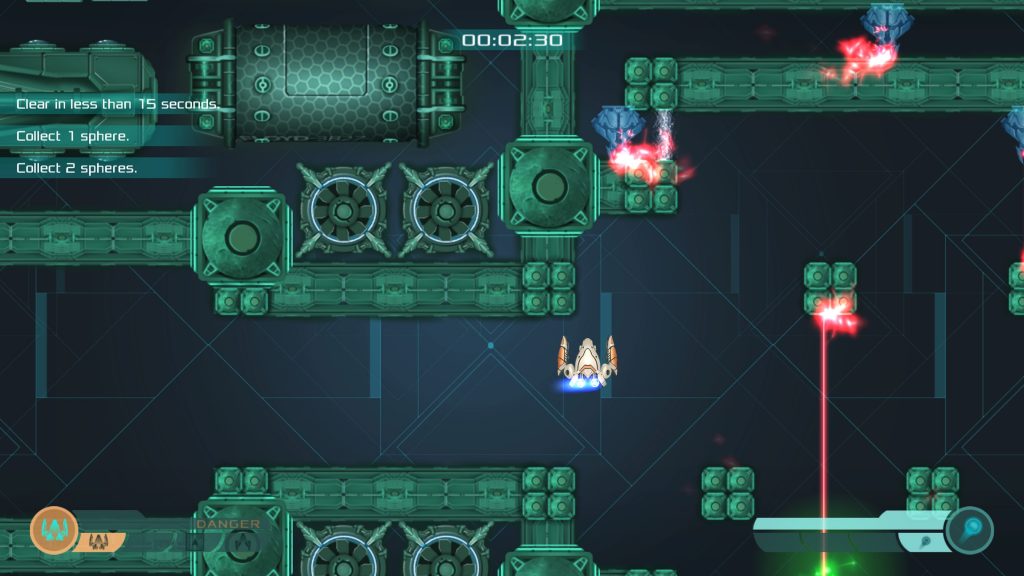 I was happily exploring levels (this is one of those twin-stick shooters that roams around a lot) to build up my energy reserves and everything was going great until the game crashed and ruined my autosave setting me back at least three levels and, like I said, these aren’t short.  The developers are looking at the cause of the problem so I ended up biting the bullet and resuming from that earlier save slot and used the opportunity to level up a bit more, take more risks and prepare myself for some of the trickier challenges that I knew were coming.  I was enjoying playing the levels with more of an emphasis on saving energy.

That was until I got back to the same level that the game had crashed on.  This time a different but equally game-ending bug hit me and I rapidly lost any further interest in playing the game.  This time after a fairly lengthy puzzle-based level, I ended up in a long boss battle that I failed in.  The game then put me back at the start of it but wouldn’t put my mech on the screen, leaving me no choice but to close the game and reload.  Unfortunately, my autosave was utterly broken and that meant I had just lost more progress.  The game’s been out in the States for a few months now and so it is very disappointing to see two progress-ruining bugs.  I could go back to my previous save (and I’m now in the habit of manually saving wherever possible) but my will to suffer through these situations has run out.

In the end, Defenders of Ekron has been more enjoyable than I expected.  It’s not my sort of shoot ’em up and it does a lot to slow down the pace of the game and stifle the excitement but overall it’s a good game that has enough going on to keep you interested.  If the game was more linear and traditional, the core movement and shooting wouldn’t make for a memorable shoot ’em up at all but add in the upgrading, challenges and the ambitious scope of the game and it ends up being more than the sum of its parts.   Without the bugs we’d be looking at a solid 7 out of 10 but in its current state, we can’t recommend the game.  Keep an eye out of patches and perhaps pick this up in a sale.

Review 0
5 Overall
Pros
+ Smart, strategic gameplay
+ Thoughtful puzzles
+ Sim levels are a great idea
+ Good level of challenge
Cons
- Technically unreliable
- Not very exciting
- A bit too much story
Summary
Defenders of Ekron may not be the most exciting shoot 'em up on PSN but its thoughtful take on the genre definitely works. Unfortunately, technical issues with the game really spoil the party.