A few years ago I reviewed Sword and Fairy 6 for PlayStation Country. I still hold it up to this day as the most technically broken game I’ve reviewed, even though the game itself was fairly competent. You can read the review to get the details (though testing it on my PS5 it actually seems to run okay now) but when Sword and Fairy: Together Forever (aka Sword and Fairy 7) dropped I was sceptical. Rather than tease you I can confirm that it runs so much better. 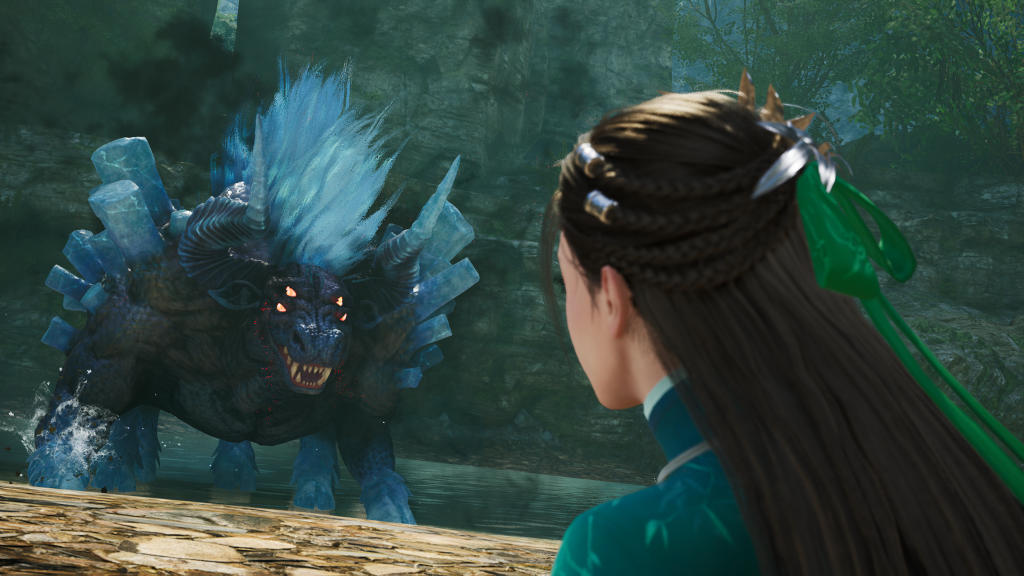 As with Final Fantasy games this is a stand alone story rather than continuing on from the previous game. There are multiple characters but your primary protagonists are Yue Quingshu, one of the last remaining members of the Mingshu Sect and Xiu Wu, a deity who has lost a divine sword and so must remain in the human world. The two unwillingly form a symbiotic bond so must remain together throughout their adventure as they discover new allies and hidden enemies.

Unlike the Final Fantasy XIII style turn based battles of Sword and Fairy 6, Together Forever opts for a real time combat solution. It’s still an RPG, but rather than being taken into a different arena where you wait for an action bar to fill before performing actions you encounter enemies in the field and have simple

combos. You’ll unlock more as you level up and you have specials that are both on a cool down and require MP. It’s serviceable. Reasonably responsive, with the ability to time a dodge at the last minute for a buff, whilst not getting as complicated or interesting as a straight action title. 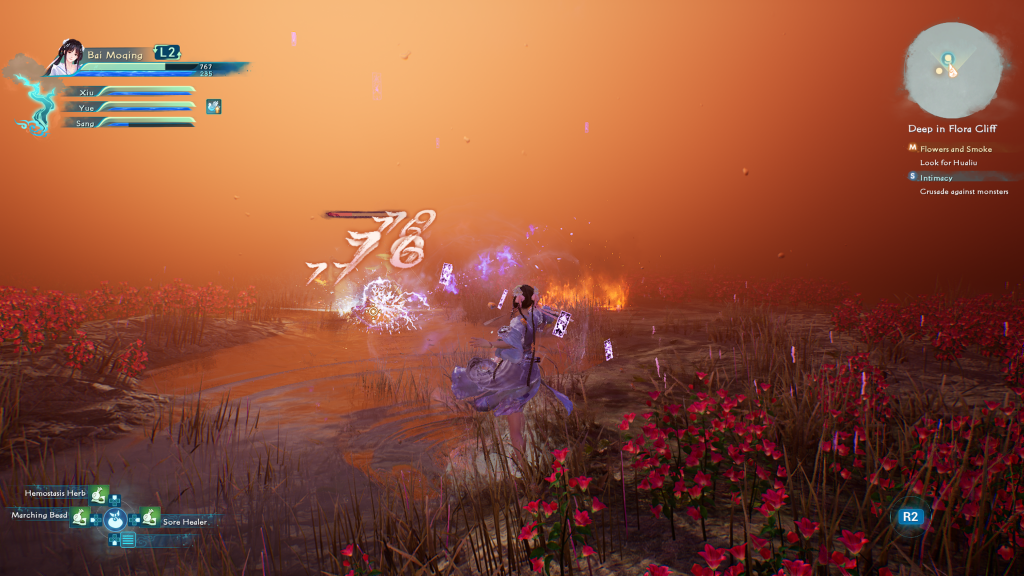 When you’re not in combat you’ll be doing one of three things. Watching cutscenes, running to the next cutscene, or side quests. There are a lot of long cutscenes here and you’ll often finish a cutscene only to walk forward for a few seconds and encounter another one which is a pet peeve of mine. The more in depth ones are well done but you’ll also get heavy talking scenes where the characters are just stood there. The main issue, besides their length and frequency, is that the translation is clumsy. All the voice overs are in Chinese so you’ll need to do a lot of reading but the text is far from natural and requires some work from you to follow. You’ll get the gist of the story but certain details may be lost in the confusion.

When you are out of cutscenes you’ll be running around a map is set zones, where the next objective or optional tasks are clearly marked. Sub-quests generally have you walking to another NPC, possibly in another area and simply talking to them. You’ll sometimes get asked a question or two but this is rare. Otherwise you’ll be tasked with defeating a monster or group there of. Pretty straightforward stuff but they don’t stick around long enough to annoy. 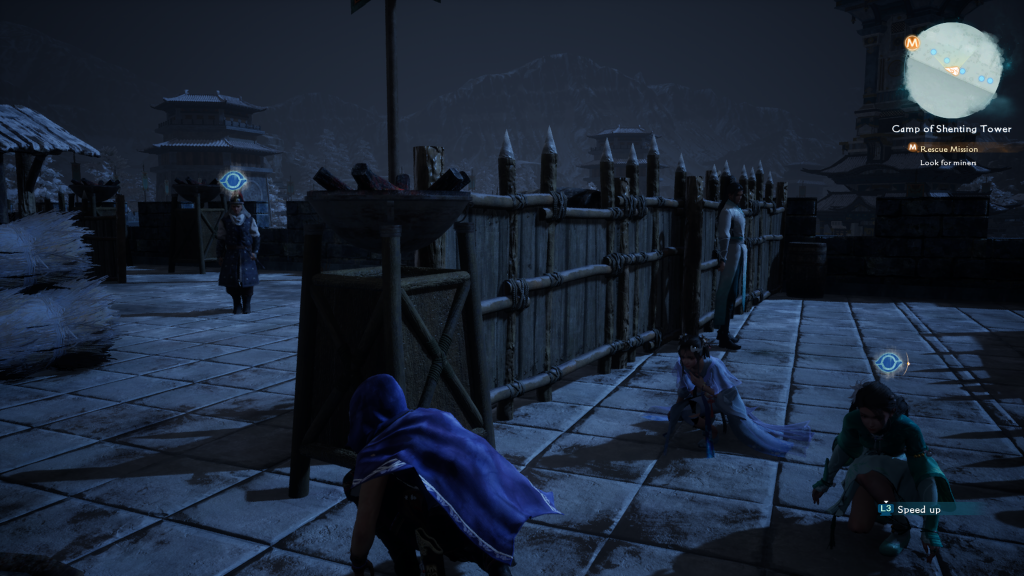 You can craft or upgrade weapons in towns, or sometimes you’ll find them whilst out adventuring but otherwise it’s just a matter of hitting your next objective. It’s a very linear game which I don’t necessarily mind but beyond deciding who you control whilst in combat (and each character does play sufficiently different) there’s not much player agency.

There is the odd mini game, either to progress or as a side activity which are okay. The main two are a rock, paper, scissors card battler and a platform mini game which is doable but a little awkward thanks to the camera. In fact the camera isn’t great throughout, in combat it struggles to keep the action well centred (the lock on is actually really bad, but you get used to it) and it gets caught up on walls in tight spaces. 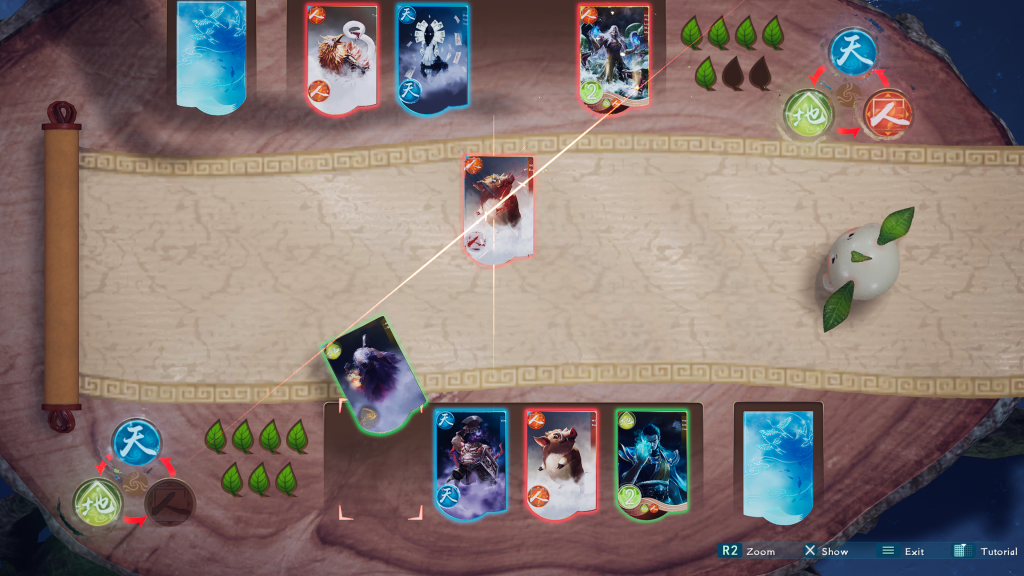 In general though technically things are very capable which is a nice surprise after my experience with the last game. It runs smoothly with very rare slowdown and load times are super quick. There is some pop in in larger areas which is noticeable but I can live with that. Visually the art design is attractive but on a technical level it’s not to AAA standard. The main character models are well done but the environments feel like they’re quite basic but with a lot of snazzy effects plastered on top which makes it appear more impressive. It works and can look great at times, but in others the illusion slips a little.

There has been the odd technical hiccup, like a cutscene playing but my screen being black, with only the sound playing and during one real time cutscene one of the character models was floating in the air rather than being in the correct spot but compared to the trouble I had with the previous game these are problems I can deal with. 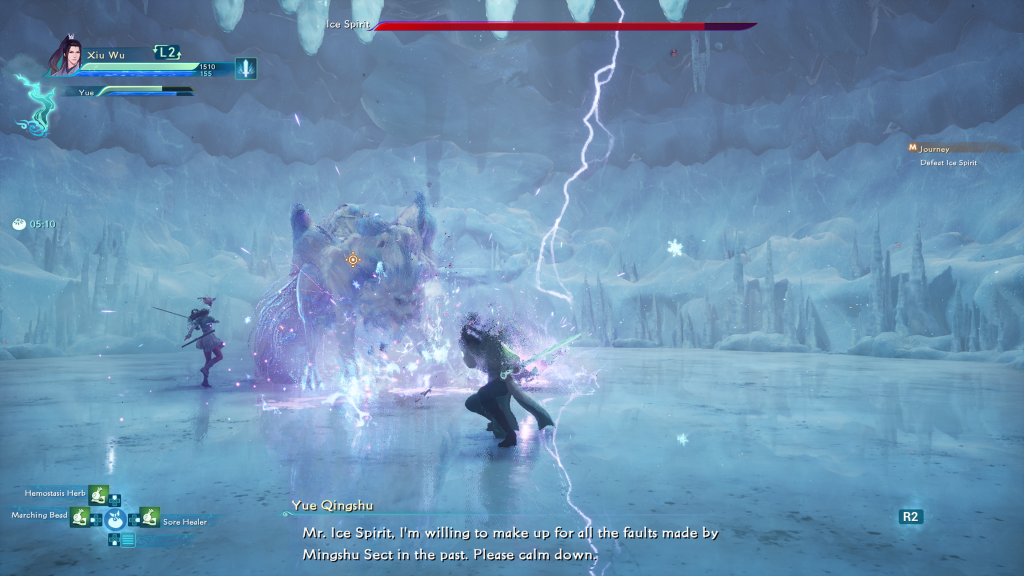 Sword and Fairy: Together Forever takes the series in a slightly different direction with action combat and it mostly works. There are a lot of cutscenes and they go on for some time which will put off some and the linear nature of progression won’t be to everyone’s tastes. As with the last game it’s still enjoyable, but unlike the last game this one runs really well with just the odd issue now and then. I’d like to see tighter translations from future titles as it does present a barrier to really getting immersed in the characters and story, though not an insurmountable one.

Sword and Fairy: Together Forever
7 Overall
Pros
+ Likeable characters and story
+ Visually attractive
+ Super fast load times
Cons
- Frequent and long cutscenes
- Very linear
- Clumsy translation
- The odd technical issue
Summary
Sword and Fairy: Together Forever is a linear, cutscene heavy RPG so people's mileage may vary. I enjoyed the story and characters despite the clumsy translation and the action combat is decent if unremarkable. Importantly it runs well, with only the odd hiccup, which after the last game wasn't a given.

One thought on “Sword and Fairy: Together Forever – PS5 Review”