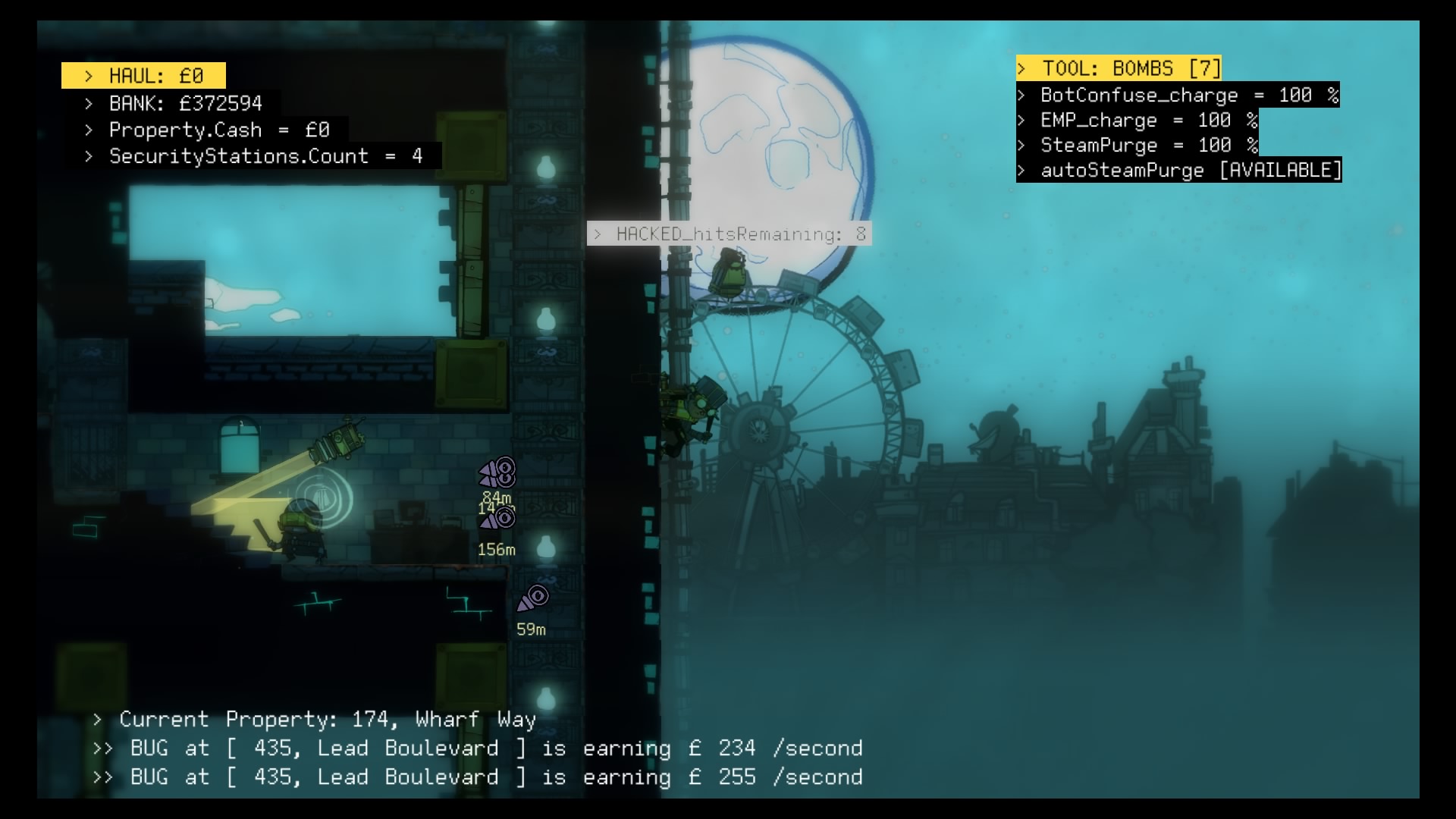 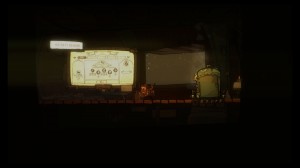 The Swindle is a game based around stealing, your team of thieves making their way through a steampunk Victorian London hoping for a chance to steal Scotland Yard’s surveillance machine “The Devil’s Basilisk” before it’s fully operational putting you out of business. You have one hundred days, good luck.

I’ve heard The Swindle described as a mix of Spelunky and Mark of the Ninja and that description is pretty good. See, The Swindle’s levels are procedurally generated and much like Spelunky you must get through (in this case stealing as much as you can before leaving) using what you have at your disposal. The Mark of the Ninja comparison comes from the stealth aspect where you want to sneak in and out of the location without being spotted ideally or you’ll set off an alarm and have a short time limit to get out before the cops arrive and things get messy. You could add a little Rogue Legacy in there are well, because you use your cash to upgrade your character and open up new levels. If your thief dies on the job then they’re gone but the upgrades carry over, all you lose is their experience which grants greater cash bonuses. One major difference though is the hundred day time limit I mentioned earlier.

Each mission you take is equal to one day, whether you succeed or fail you have one hundred attempts to raise enough money to storm Scotland Yard and steal “The Devil’s Basilisk” or it’s game over. That means starting again from the beginning with the basic character and no money. I’ve yet to finish The Swindle, though I have attempted the final stage a few times. If you fail the final stage you have to buy your way back to another attempt and it’s not cheap. The Swindle is a harsh mistress and may be too punishing for some.

I really like the 2D art and the presentation on the whole is excellent although not particularly colourful (all heists take place at night). The robots and thieves both have their own charm and the music is suitably quirky for the situation whilst also making you feel under pressure.

So how do you go about this thieving lark? You get dropped from your blimp outside of a location, starting in the slums and working your way up to warehouses, banks and casinos. First you’ll have to find your way in, with earlier locations having unlocked doors and plenty of windows whilst later level’s doors need to be hacked or blown open with explosives. Climbing up the side of buildings is simple enough with a wall jump that’s available from the start so your choice of entry is key to a smooth robbery.

Once inside you’ll have to compete with a variety of patrolling robot guards, cameras, mines, spikes and more with harder combinations appearing as you progress. One strike from you baton will take out early guards and they don’t react to anything other than you entering their vision cone. Later guards react to sound which you can sneak around but none of them react to a downed colleague or even being hit themselves if they require multiple strikes. You always die in one hit. 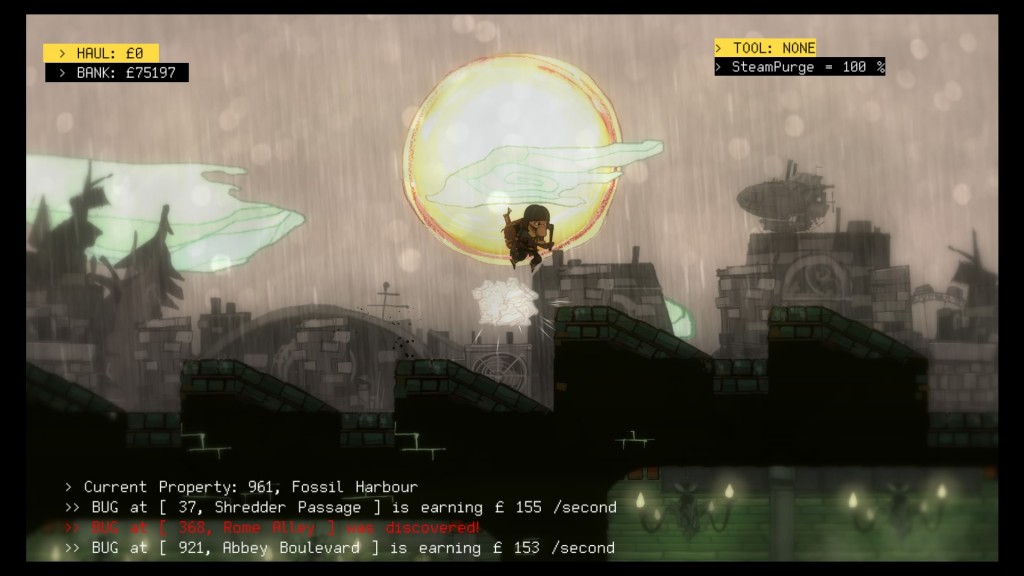 You don’t have to take out enemies if they’re not in the way, what you’re here for is money. This can be found in tiny wads on the ground, bags, safes or you can hack computer systems. The computer systems house the most money so these will be your primary targets with any other cash acting as a little bonus or you may simply decide to leave it if it seems to risky. As you progress through the areas the amount of money you can find just lying around and stored on computers increases massively which gives a decent sense of progression as upgrades you could never hope to afford early on become attainable after one or two successful jobs.

Speaking of upgrades, you will definitely require some to progress. The basic one is the hacking skill which you’ll need to access the computers, this can then be upgraded to open locked doors, turn off entire security systems and control downed drones. If you want to be a little less subtle there are bombs, which you can upgrade to hold more, be more powerful and speed up the deployment. These are the two most important ones I’ve found, as without the early hacking upgrades you’re not going to be getting much money and the bombs are helpful when a procedurally generated level blocks your path. On top of these you get upgrades to the power of your attack, a smoke cloud which basically makes you invisible and the ability to double, triple and even quadruple jump. There are others as well and by the end of the game your thief will be far more capable than they were at the start. When you have to start over from scratch it can take some getting used to.

The agility upgrades are also very important, not in the same way as the hacking and bombs but as a safety net. The Swindle’s controls aren’t quite there, which makes the precision platforming required to circumvent certain obstacles more difficult than it should be. For example, Mario has taught us that jumping as close to the edge of a ledge as possible is the best, not in The Swindle. If you’re too close to the edge then your character simply won’t jump. Many times I’ve fallen straight into pits because my character has refused to jump and through experimentation it seems that if one foot is off the platform then if won’t work, both feet have to be on solid ground. I’ve adjusted now but when one mistake means death I want to know exactly what a button press is going to do at all times. Similarly if you jump underneath a ledge sometimes your character will reach up and lift themselves, other times they won’t. I can pretty much do it when I want to now, but it also happens when I don’t want it to, often resulting in death again. Too often death comes not from a bad decision but from clumsy controls and that’s a real shame.

Whilst I’m complaining, the game has crashed on me a few times at the end of levels (luckily it still managed to save) and enemies have a bad habit of magically appearing on the other side of barriers whilst they’re off screen which can cause problems. Being warped from one location (my pod as I tried to leave was a great one) to another is a weird one that has cost me lives multiple times as it drops me in a room full of enemies. Also thanks to the procedurally generated levels how smooth you progress is determined by luck, with some levels having multiple computers that are reasonably easy to access whilst others are being guarded by a small army. The levels don’t take into account what upgrades you have either so you won’t know what skills you need in a new area before you try it at least once. There is a suicide option in the pause menu in case you literally get stuck. Generally speaking you are going to have to fail before you succeed at every step in The Swindle, but you will learn something which will hopefully help you to proceed further next time. 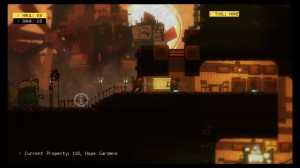 The Swindle comes very close to being excellent. The idea is sound, the gameplay is rewarding and the visuals have charm but the controls are a big problem. For a game centred around manoeuvrability the thieves don’t respond well enough to inputs. This can be mitigated somewhat with the upgrades but too many deaths come from no real fault of your own and combined with the limited time frame can lead to frustration. It’s not for everyone but if you believe you’re a patient gamer who’s not going to be too discouraged from failing to complete it and have to start again then there is a fun little game here.

The Swindle
7 Overall
Pros
+ Good sense of progression + Ghosting a level feels great + Great look and overall presentation
Cons
- Controls are clumsy - Procedurally generated levels can cause problems - A little buggy right now - Harsh punishment for failure
Summary
The Swindle comes very close to being excellent. The idea is sound, the gameplay is rewarding and the visuals have charm but the controls are a big problem. For a game centred around manoeuvrability the thieves don't respond well enough to inputs. This can be mitigated somewhat with the upgrades but too many deaths come from no real fault of your own and combined with the limited time frame can lead to frustration. It's not for everyone but if you believe you're a patient gamer who's not going to be too discouraged from failing to complete it and have to start again then there is a fun little game here.