Super Jagger Bomb  is an arcade action title from Spanish software  soloist CheapeeSoft Games.  However, anyone who ever frequented an arcade in the ’80s will definitely recognise where this game gets its inspiration from.

With its jumping, floating and bomb-collecting action, this game is very much a clone of Tehkan’s 1984 coin-op classic Bomb Jack.  What’s important to know here is that Bomb Jack is our favourite coin-op of all time. 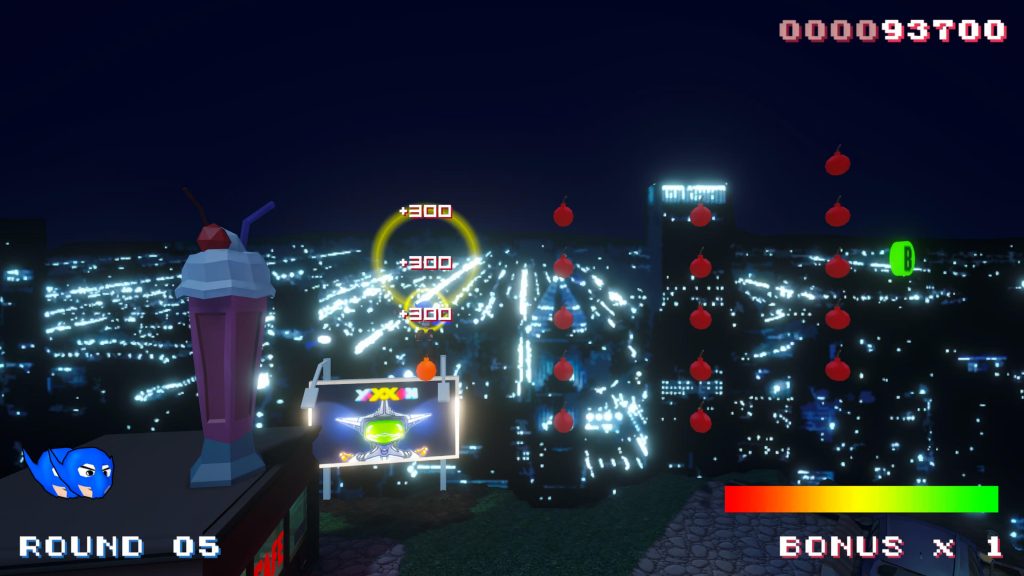 In the arcade original, you were tasked with clearing the screen of bombs from a repeating series of one-screen levels set across five distinctive backdrops from around the world.  One bomb would be sparkling and when collected, another would then do the same.  Get all of the sparkling bombs and you’d get a fat points bonus.  But if you just wanted to progress, you could pick them up in any order.

If anything it was like taking Pac-Man, as a top-down game, and holding it up so that gravity is a factor.  The titular Bomb Jack could jump but also, by tapping the jump button, hover to a degree too, giving him a degree of horizontal movement.  Of course, you needed bad guys too and Bomb Jack would slowly increase the number of enemies on screen, adding UFOs, soldiers, weird ball things, alien snails and whatever else to get in your way and rob you of your precious lives. 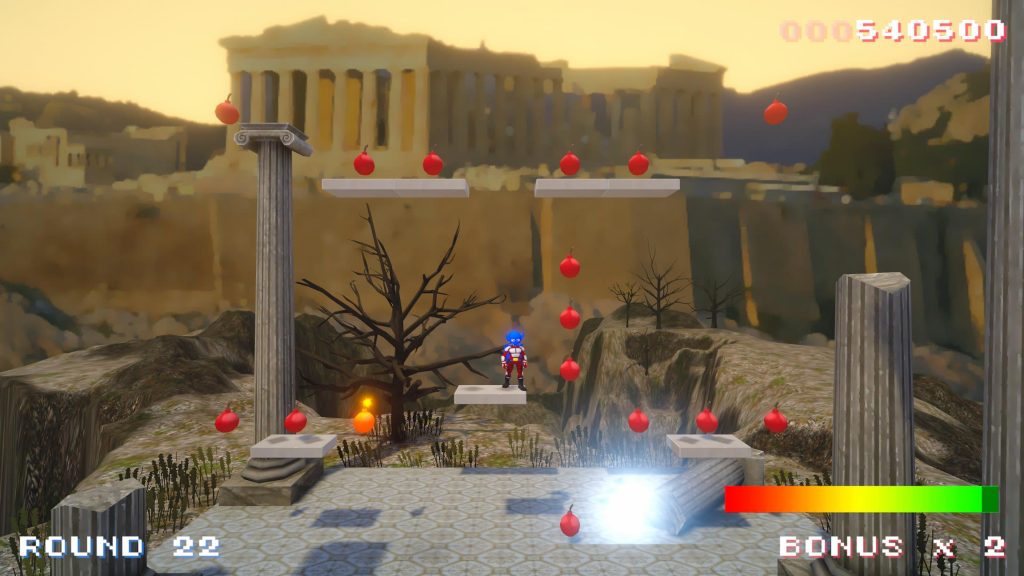 So, why are we talking about the rules of Bomb Jack here?  Because they all apply with Super Jagger Bomb.  This is essentially a remake that uses all of the same gameplay elements as well as taking the idea of mixing and matching level layouts with a series of backdrops in the same was as the arcade classic did.

However, there are differences and, if we’re being honest, not one of them really improves the game over the original.  Some of these are minor.  Like how each level shows you the flow of the sparking bombs, giving you an idea of how to plan your route.  This is an okay idea but it just slows down the action unnecessarily.  You can crouch now but that’s only a factor on a couple of level layouts but it does make these levels, by far, the hardest ones just because the controls have a degree of inertia that makes navigating such things a little tricky.

In Bomb Jack all enemies started off as little men who would turn into more deadly enemies when they hit the ground.  You could manage them a little because they’d appear on the opposite side to where you were.  There’s none of that now.  Enemies just appear in their final form.  It’s just not quite as good. 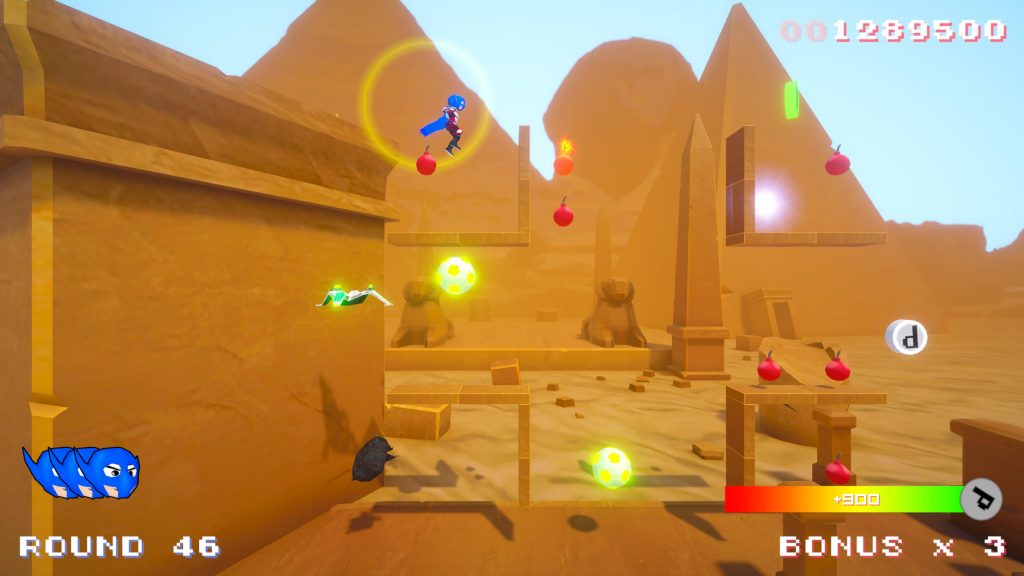 Also not as good are the controls which are a little fiddly to the point where we kept switching from left stick to d-pad in an effort to figure out what control system was best.  Jagger has a lot more horizontal movement compared to Jack and so that makes lining him up with bombs a little awkward at times but, as you’ll find out in a little while, this doesn’t ultimately matter.

The main problem with Super Jagger Bomb however is the visuals.  Bomb Jack was an elegant and beautiful game.  The visuals were clean, colourful and bright and the backdrops were great.  Indeed, the third backdrop in Bomb Jack (based on Castle Neuschwanstein in Bavaria) is my favourite graphic in a game ever.  In comparison, Super Jagger Bomb‘s locations are bland, forgettable and ugly.  Also, they’ve added a degree of parallax scrolling which only serves to make the game harder to play.  Add to that some very hard to see enemies (especially black-coloured ones that aren’t modified to improve visibility on the night stage) and often the visuals here will let you down.  Also, the main character is sort of awful. 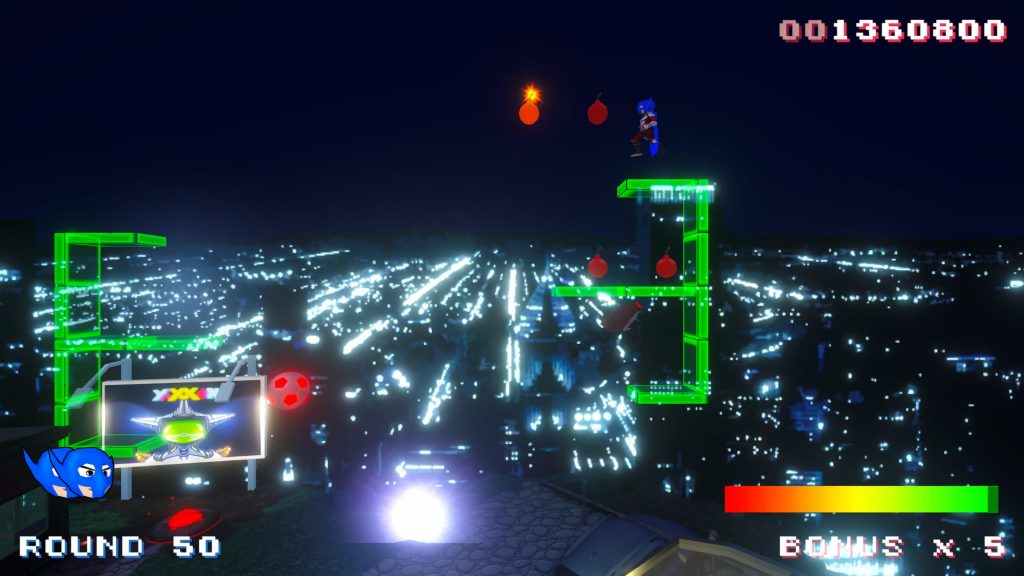 However, if you can get past all of that.  This is kind of enough like Bomb Jack to get a bit of a rub from it.  There’s fun to be had.  It’s just not as much fun as a game that was made over 35 years ago on the kind of technology that looks practically stone age compared to the PS5 we ran this game on.

One major difference is the difficulty curve.  Bomb Jack, like most ’80s coin-ops, starts easy and gets progressively more difficult quickly in an effort to part you from your cash.  Super Jagger Bomb is a lot easier.  While it uses the same kind of level mix and matching that we mentioned before, meaningfully things don’t really get difficult for a long time.  The Platinum trophy is unlocked for beating level 100 (which does finish the game and gives you an actual ending) but it wasn’t until the high 80s that we really had any trouble.  Thankfully, the game flings extra lives at you all the time so we were able to beat the whole thing at our first time of asking. 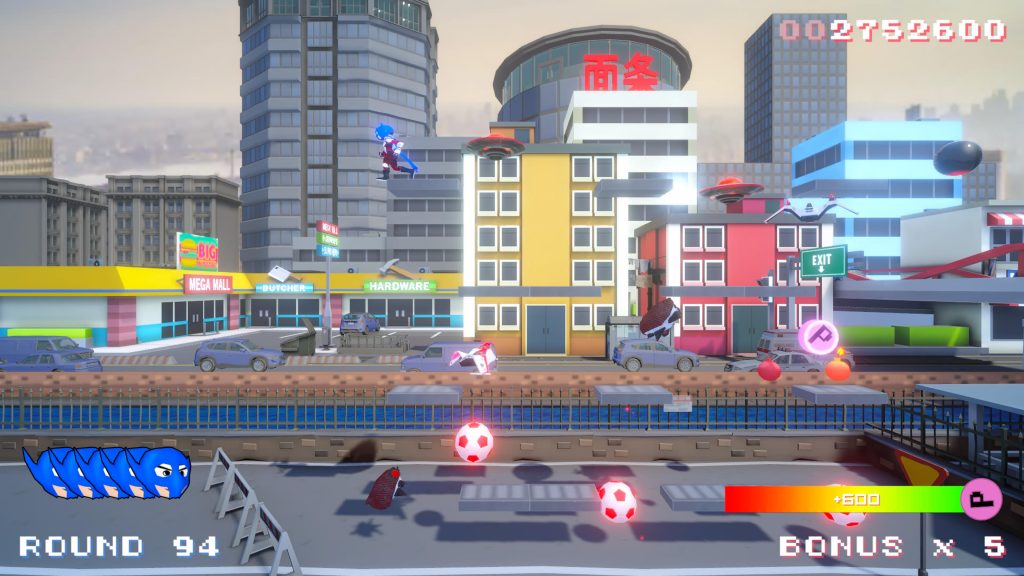 Once you’ve done that, beating that many levels, you’re not really going to care about score.  Indeed we gave up on getting all the sparkling bombs after the first dozen levels and then it was just the grind to the end.  The levels are short though so you’ll get this all done in an hour, especially as some levels are poorly designed enough that you can clear them before an enemy even spawns.  The game also adds a bomb power-up that will clear the whole level, in the correct sequence, if you’re lucky enough to catch it.

In the end, it all comes down to the fact that Bomb Jack is still the better game.  Indeed, many of the 8-bit home ports of Bomb Jack are better than this but it’s not all bad news.  The classic gameplay formula still works and is still fun.  Sure, there’s issues with the visuals, the controls and the difficulty (we completed the whole thing in our first attempt) and the score reflects that, but we got some enjoyment out of the game.  Although, ultimately it just made us fire up MAME for a good go on the original afterwards and that’s definitely the better option.

Super Jagger Bomb
4 Overall
Pros
+ If you're going to shamelessly rip off a game, Bomb Jack's a good choice
+ The old gameplay is still present
+ Has an ending
+ Online leaderboards
Cons
- Visuals are ugly and often unhelpful
- Controls are a little loose
- Takes ages to give you any challenge and we finished it on our first go anyway
- Backdrops are quite uninteresting
Summary
Super Jagger Bomb is a Bomb Jack clone where the classic gameplay does its best to shine through despite the visuals and controls letting the side down.