Casual Challenge Players’ Club is a top-down pool game from Yume Game Studio and is part of a larger series of anime-based casual titles.  The top-down view is how most pool/snooker games were presented back in the ’80s and ’90s until the now typical 3D view became the way to do it, so this is very much a throwback to games like Arcade Pool.

You play as a nameless anime archetype, the guy who looks like he’s 15 but has slightly more formal wear and grey hair to indicate some sort of seniority.  You’ve been invited to an elite club that only invites the best players in the country to compete for membership and trophies.  The challenges are set to you by three anime girls who have different hairstyles but no discernable noses. 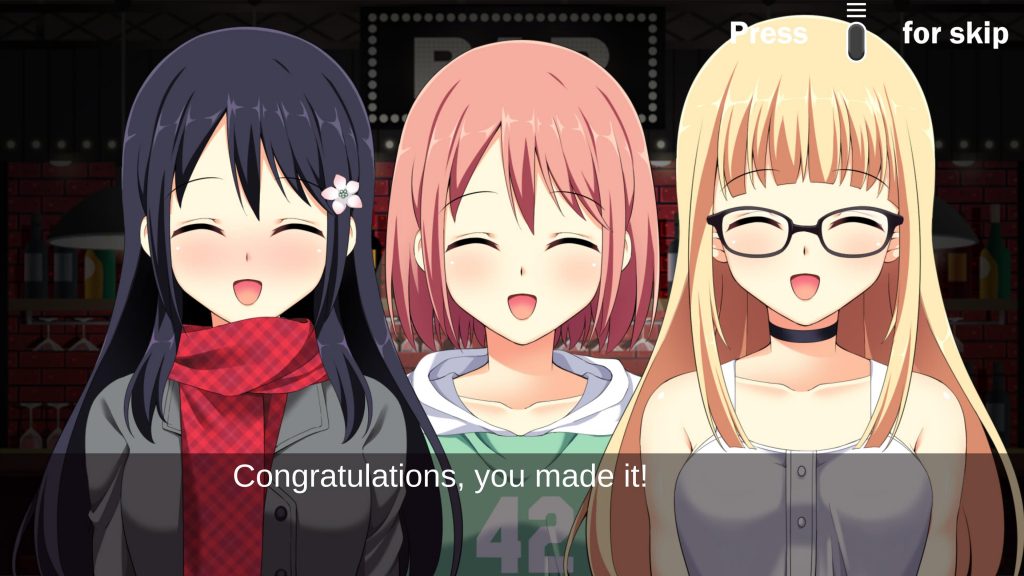 The single player campaign has 14 levels but, oddly, these are set across three frames of pool.  Kind of.  Right, it’s a little bit odd but round one has you breaking off with a four ball rack.  You’re tasked with potting all four balls but you have a miss counter.  Use up all your misses and it’s frame over.  Then you’ll get a few rounds where the balls are placed around the table.

If you’ve ever played pool or snooker by yourself, sometimes in an effort to not be entirely rubbish, you might place balls near the pockets so that you can put together a little break.  Well that’s what these levels are like.  Most of the shots are almost gimmes.  Anyway, after a few rounds of that, you’ll get a round where you break off with six balls.  This is followed by more of those super easy rounds (oddly with four balls most of the time).  And then you’ll eventually get to a nine ball frame.  Followed by a few more easy rounds.  Beat round 12 and you get the Platinum trophy.  Beat round 14 and you’ve completed the game and are now Japan’s most elite pool player.

Considering that this is meant to be an exclusive club of the country’s best pool players, the round layouts are very easy.  Also, you never play any other players (there are literally no AI matches available in any mode).  Which is also quite odd.  But I guess the ‘Casual’ in Casual Challenge Players’ Club is there for a reason, right? 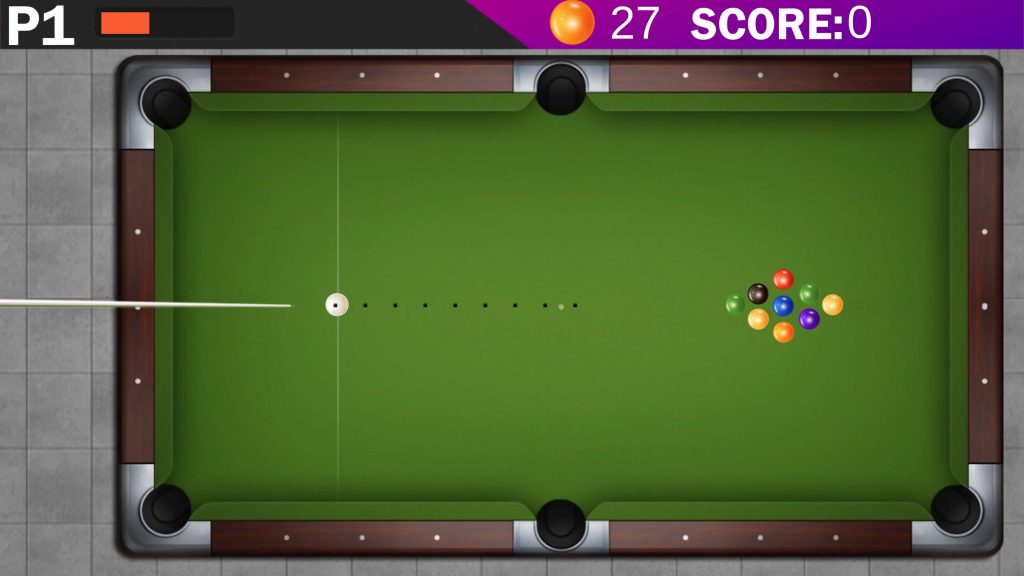 What makes the game a little trickier are the actual mechanics of playing pool.  The top-down view makes lining up shots quite difficult, your shot indicator doesn’t show where the target ball will go either so initially it all seems like a bit of a nightmare.  However, this is balanced by the physics (which are reasonably accommodating and simplified from real life) and the generous pockets which are very forgiving.  Also, the number of misses you get for each table are plentiful enough that you’ll struggle to fail at any point in the game.

Oddly, unlike every pool game in existence, you’ve got no spin control at all.  If anything, that’s pretty unforgivable.  Even Angleball on the ZX Spectrum had spin controls and that game got very middling reviews in 1987.  There’s just no excusing it in a modern game.  Also, the table physics are completely off with balls slowing as if the table is made of sandpaper.  Also, look at the state of this controls screen. 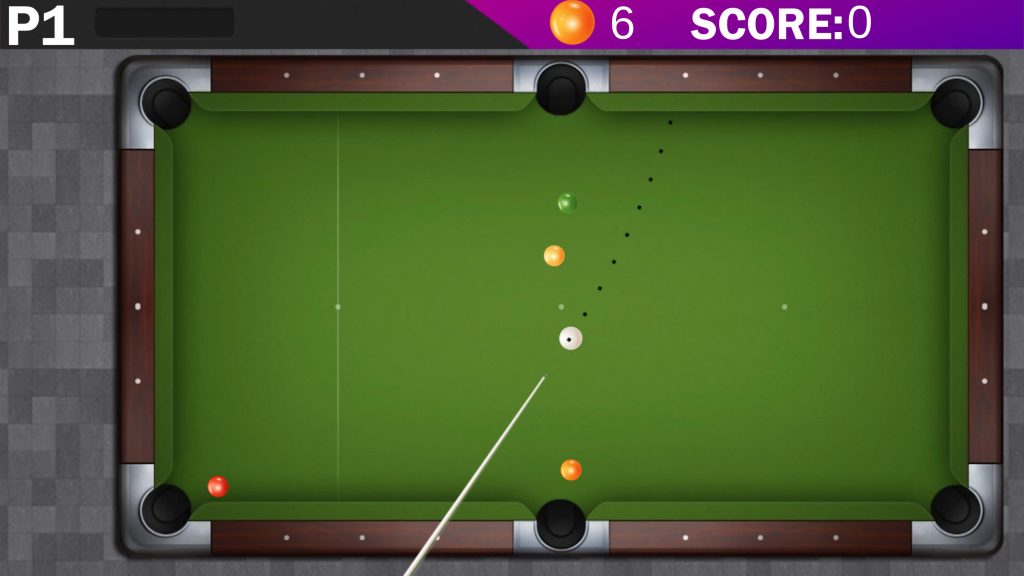 Another annoyance is the control system.  With no spin to deal with all you’ve got is aiming and shooting.  The shooting involves you tapping

to start your power bar off and then tap it again to shoot.  So you’d be expecting it to automatically stop at full power, right?  Or start decreasing?  Nope, it loops.  Honestly, it’s a small thing but so powerfully unintuitive, it’s as if the developer has never played a pool game in their life.

Once you’ve beaten the campaign (which should take you no more than 15 minutes) all that is left are a couple of local versus modes (for if you can find someone else to play this with you who won’t hate you for it) and the ‘Master Mode’ which gives you 16 misses with which to beat all of the rounds.  Now you might think that means all 14 levels but it doesn’t.  Instead it’s just the three where you break off.  The structure of this game makes so little sense. 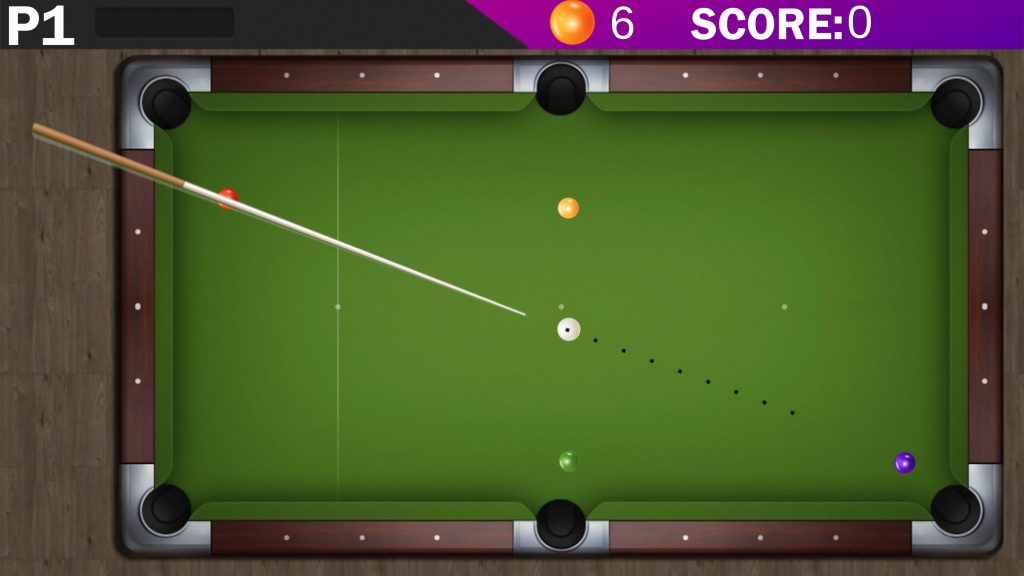 Visually, the game opts for a very plain 2D look with no use of lighting.  It looks like an old Flash game while the music offers three tracks, one of which has the most annoying percussive kick drum sound we’ve ever heard.

Aside from the very quick double Platinum, Casual Challenge Players’ Club offers such a thin package that it’s really impossible to recommend.  It lacks any kind of realism, challenge, flair or even love for the sport that it recreates.  We don’t really get it.

Casual Challenge Players' Club
2 Overall
Pros
+ Basically playable
+ Two easy Platinums if that's your thing
Cons
- Poor physics
- No AI matches
- Incredibly short campaign
- Weak visuals
- Annoying audio
- No spin control at all
Summary
Casual Challenge Players' Club is a pool game with no AI, bad physics, poor presentation, almost non-existent campaign and, most unforgivably, it lacks any spin controls which is a move we didn't even see happen in the '80s when playing pool games on the Spectrum. This has to be the worst game in this genre.