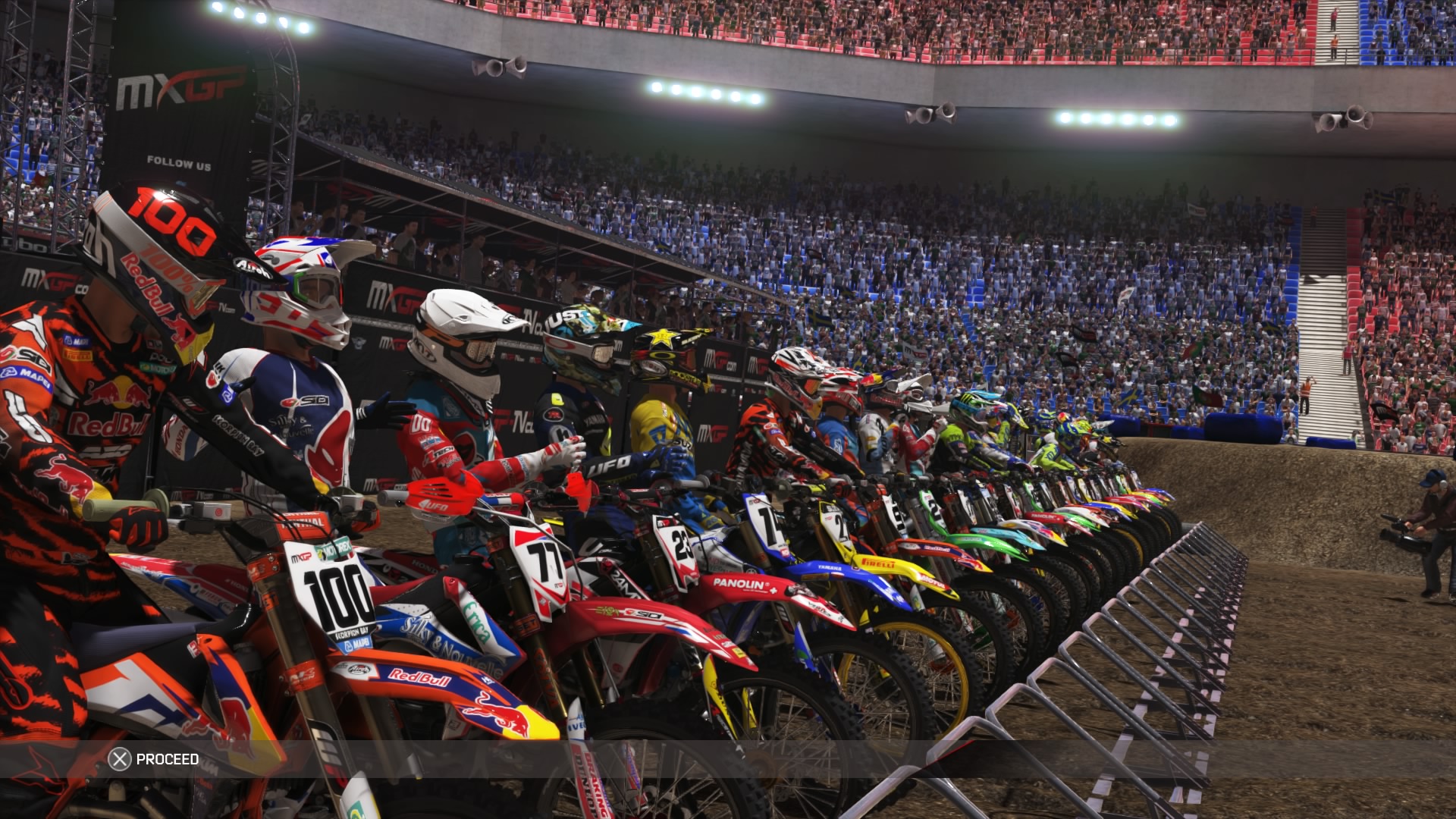 The motorsport season is now in full swing which means the latest round of licensed racers from Milestone can take to the grid. First out of the blocks is MXGP2 which, shockingly enough is the successor to last year’s MXGP title. Recreating the circuits, riders and teams of the 2015 season, MXGP2 looks to improve on last year’s foundations. Does it catapult its way to victory or remain stalled at the gate?

Much like last year, you’re invited to watch video tutorials of the racing concepts motocross puts to use. They’re still informative and offer some good insight for novices but I’d much prefer a playable tutorial. A test track is on offer to brush up on your skills or practice with the new clutch controls but newcomers might still be caught cold by this introduction. 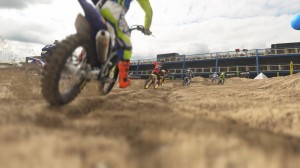 That said, the fantastic core of MXGP remains intact with some additions made to mechanics. The clutch now becomes an important part of the race start and braking. It’s another thing to consider whilst you’re trying to map out the shifting terrain and shifting your weight on the bike. I’ve enjoyed how involved riding in this series has been and this year’s incarnation has done well to iterate on that. There’s a lot to take onboard and, whilst overwhelming, applying all that knowledge to race situations is satisfying. Pack racing remains hectic as you force your way into position and the AI is reasonably aggressive.

Progress is somewhat stifled with some quick restarts for wandering off track. Sometimes it feels warranted but you get occasions where you’ve been bumped off course and, rather than let you ride back in line, it’ll reset you. You do have plenty of flashbacks at your disposal to cover off any crashes or mistakes and, at least on medium difficulty, you can catch-up to the field with a little bit of effort. It’s a reasonable, competitive effort that manages to keep players on their toes.

There’s been a couple of additional modes, too. The Real Events mode transitions from the MotoGP series to recreate and reminisce over the 2015 season’s finer moments. As usual, they task you with changing history from adverse circumstances. It’s entertaining to carve your way through the pack in this game and at least gives you more reasons to race. Less impressive is the MXoN series which segregates the grid by nationality. Pick your country and race as a real life compatriot. Its been built as a genuine bullet point but its not really striking me. 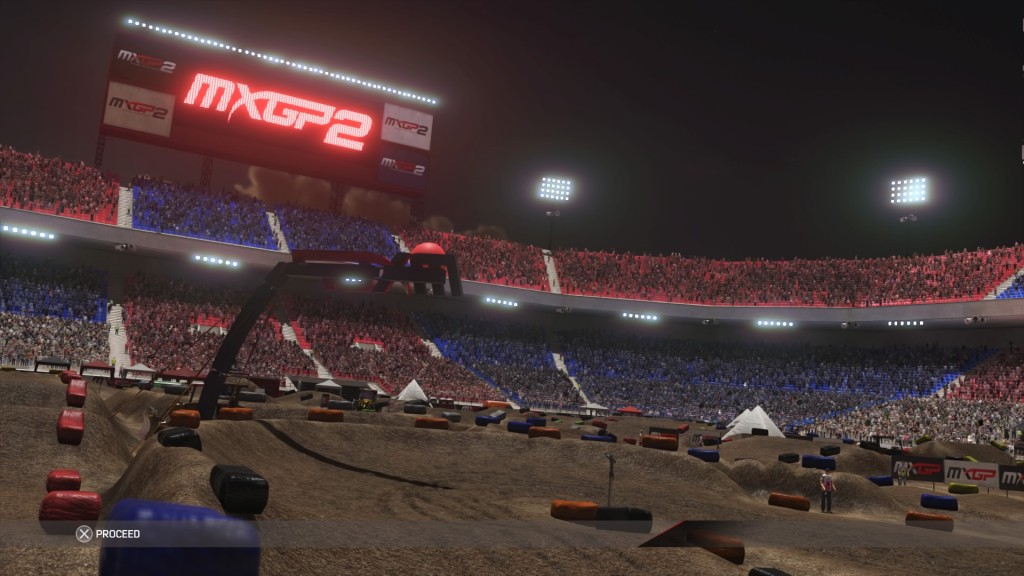 Finally, MXGP2 adds some fictional indoor tracks and gives them their own series for you to race in. They offer some variety with the traditional, large and winding outdoor tracks replaced with compact, nuanced tracks within a stadium setting. They focus on jumps and speed so the style required to ride them is a little different.

With the same engine being rolled out for another Milestone release, the visuals begin to age exponentially. Circuits are well represented and the compact nature of them allow for some aesthetic variety in a relatively small space but it looks behind the times. The real attention focuses on making the bikes look nice. It doesn’t make the bike’s fidelity clash with its surroundings but it does make me wonder what those artists could do with some more time, money and tech. 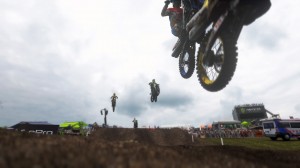 At time of writing, the online aspects appear to be deserted. You can fill out the field with AI but the same modes available in single-player are represented. I would’ve preferred to see something different on offer but I’d imagine the chaos of the pack with people you know can be quite glorious to be amidst but finding anyone to play at the moment seems a lottery.

What provides is a gradual improvement over last year’s effort. New mechanics make the racing more involved whilst maintaining the hectic fun of the original. There are definite signs of fatigue with the game’s visuals and a fairly light online component. The new modes are trying to re-contextualise the bread and butter racing which, whilst still engrossing, is starting to run out of steam. If you’re a fan, you’ll be fine. Newcomers would probably get more out of this than last year’s effort, if they’re willing to put the time in.

MXGP2
7 Overall
Pros
+ Solid, competitive racing. + Plenty of modes, even if they offer little in variation.
Cons
- The same engine with the same problems. - Online is a ghost town. - Not entirely friendly to newcomers.
Summary
MXGP2 improves, albeit slightly on last year's effort whilst still providing a competitive racing experience. The mud still makes a nice change of scenery across a variety of modes. Its a pity it's the same engine that bogs it down at times with the loading times remaining a touch long. Online lobbies remain deserted, bar a few devoted followers. It doesn't do much to foster new faces but I still find it a little more entertaining than some of Milestone's other properties.
We use cookies on our website to give you the most relevant experience by remembering your preferences and repeat visits. By clicking “Accept”, you consent to the use of ALL the cookies.
Cookie settingsACCEPTREJECT
Manage consent