Although it’s not a deck builder, my experience with Slay the Spire and the recently reviewed Neoverse has helped me no end with Star Renegades which is new to the PS4. The combat has a lot in common with that style of game and it’s another Rogue-lite. It brings plenty to the table though so let’s get into it. 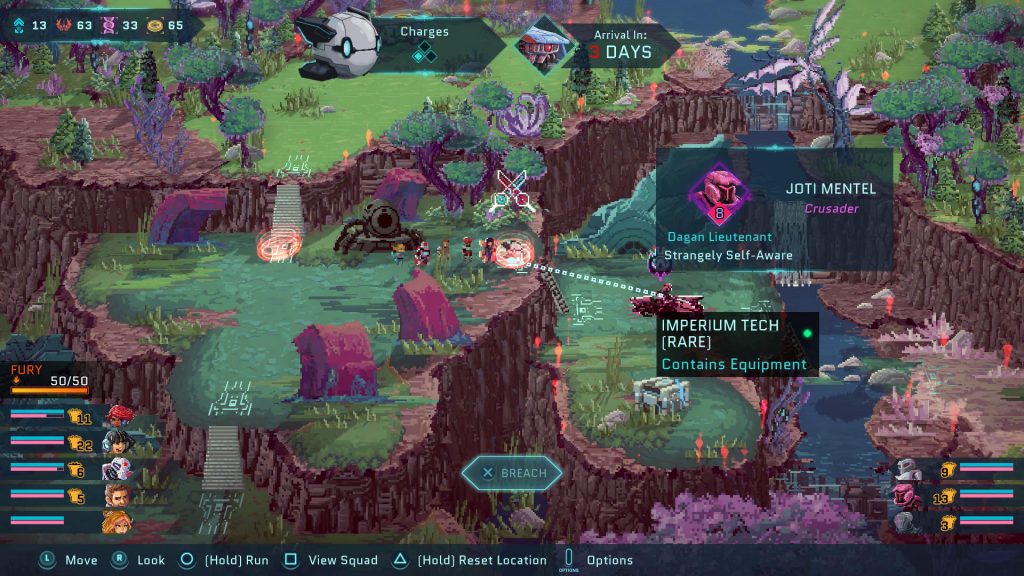 The game starts with an invading force attacking and taking over your dimension. It acts as a tutorial, teaching you the basics of combat but you’re going to die once the big bad rears his head. A scientist figures out that this enemy, the Imperium, will keep jumping to and taking over other universes unless she can give them a head start. She sends a robot to what she believes to be the next target, three Renegades assemble and take the battle to the enemy. Succeed and the Imperium lick their wounds and attack another parallel universe, fail and you send a message to another universe and hope they do a better job. It’s a Rogue-lite, succeed or fail, there’s always another run.

You start of with three set characters and must work your way across a map towards where the Behemoth, the main boss of that zone, is due to arrive in three days. The map is sectioned off by barriers and your robot buddy can destroy three barriers per day before you need to rest. Each section will generally hold an enemy and possibly a reward in the form of currency, equipment or healing stations. You want to plot out where to go and use your charges wisely before the destined battle with the boss on the fourth day. 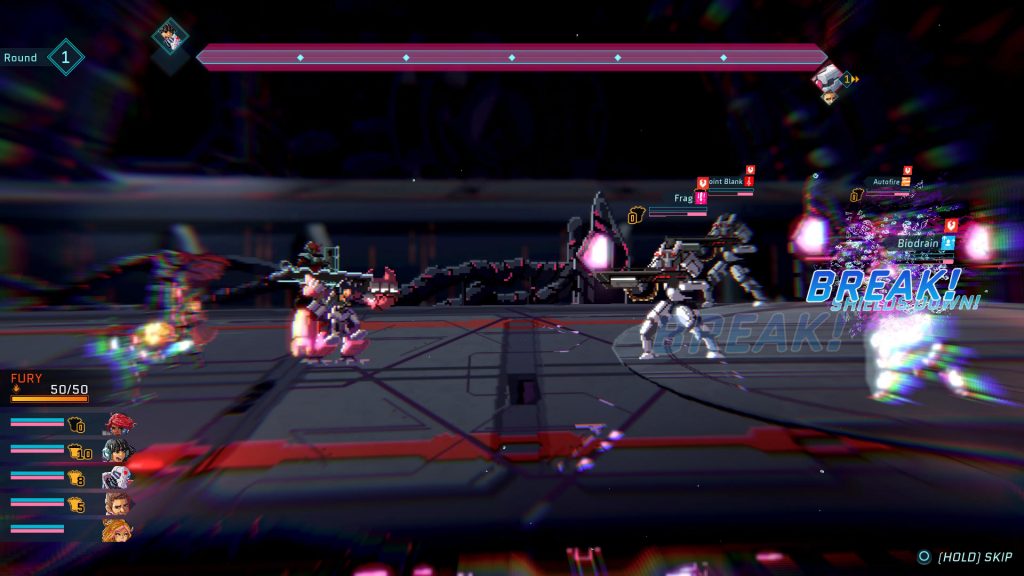 When you encounter an enemy on the map you’ll be taken to the battle screen where a turn based battle will play out. Nothing is left to chance as you have all the information on the screen and the idea is to control the battle with your characters and their abilities. The primary thing to take notice of is the timeline at the top of the screen. Here you’ll see when the enemy intends to act and you can inspect an enemy to see what action they’re going to take and against who. You can also delay their action a limited number of times, hopefully cancelling their action for that round.

Different moves take different amounts of time and some cause delay whilst others don’t so knowing when to attack, defend and delay is the key to surviving, potentially unscathed. Getting an attack in before your opponent will grant a critical hit but the same is true the other way around so each move must be considered carefully unless you want your run to end prematurely. Each character has health, armour and shields which you need to be aware of. The shield blocks the majority of damage whist it lasts and replenishes after battle so that is your buffer, health and armour doesn’t automatically so is a scarce resource that needs to be treasured.

Having a balanced squad is key as you’ll rarely be dealing with just one enemy at a time and to this end when you do finally beat the boss you’ll be able to recruit one of two new members to flesh out your squad a little. They don’t give you any information about the new character which is a little mean as you won’t know what their strengths are to make an informed choice but as with most Rogue-type games actual experience is as important for progression as in game experience. 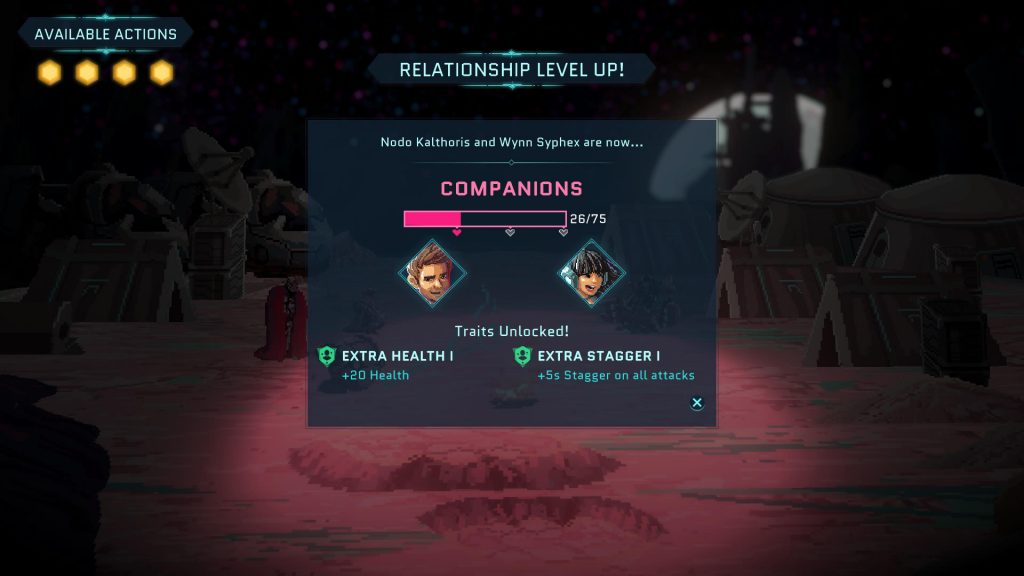 Speaking of you’ll get DNA for defeating enemies which can be spent to upgrade characters of your choice to the next level. Their stats do go up with a level up but the most important thing is the new skills they learn at set intervals which will give you more options in battle. You’ll also be able to choose one of three items after a battle to equip, but these don’t feel quite so game changing and being random you can keep getting the same type of weapons over and over leaving your other characters left out.

After you’ve broken three barriers you have to camp for the night and here characters can improve their friendships by playing a limited number of cards they’ve earned through level ups or found whilst exploring. Higher friendships will unlock passive bonuses and grant a combo move which will use up both their turns, costs some Fury (generated through battle) and is generally very powerful but can only be used once per battle. Certain classes have a four star compatibility which if maxed out grants a progeny character class to potentially bring on a subsequent playthrough. 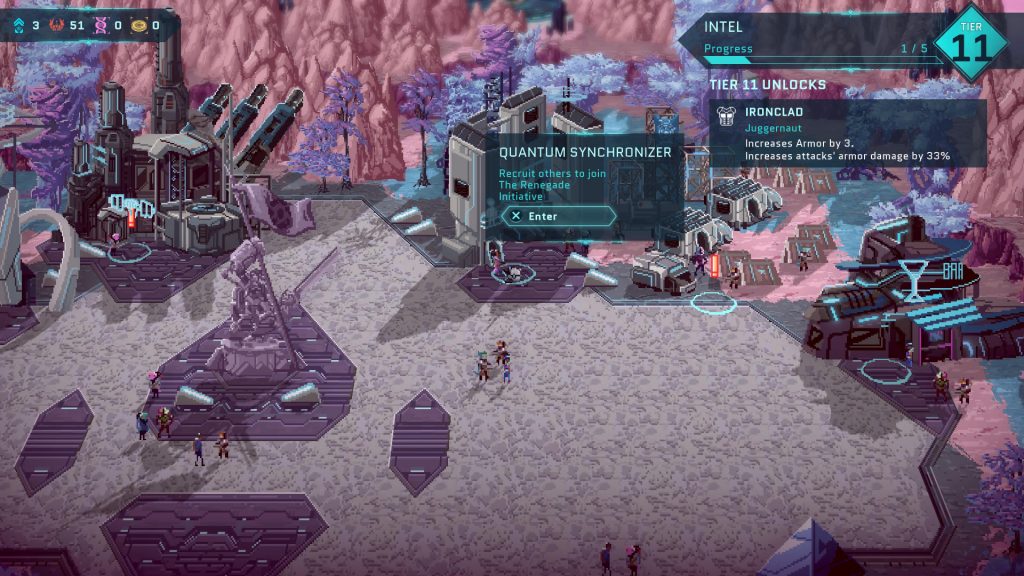 To beat the game there are three planets to save before you take the fight to the Mothership, if one character falls then they revive after the fight with only one health point and a debuff but if all characters die then it’s game over and you have to start from the beginning again. I actually beat the game on my first attempt, but I would not call it easy at all. There were some close calls in there and as I said at the start of my review, my recent experience with deck building Rogue-lites stood me in good stead for this.

There are seven(!) difficulties above the default normal to try out however so beating the game once isn’t really the point. Upon finishing a run, successfully or otherwise, you can spend points you’ve gained to unlock new character classes to start the game with, upgrade your little robot and unlock new items and perks. Perks are either or though and you can start with one item but that’s it, otherwise you just unlock the chance for it to appear in a run. I don’t think there’s anything game changing there which is a little disappointing but since I completed the game on my first go maybe it isn’t necessary and it’s actually really well balanced, depending on your team composition. 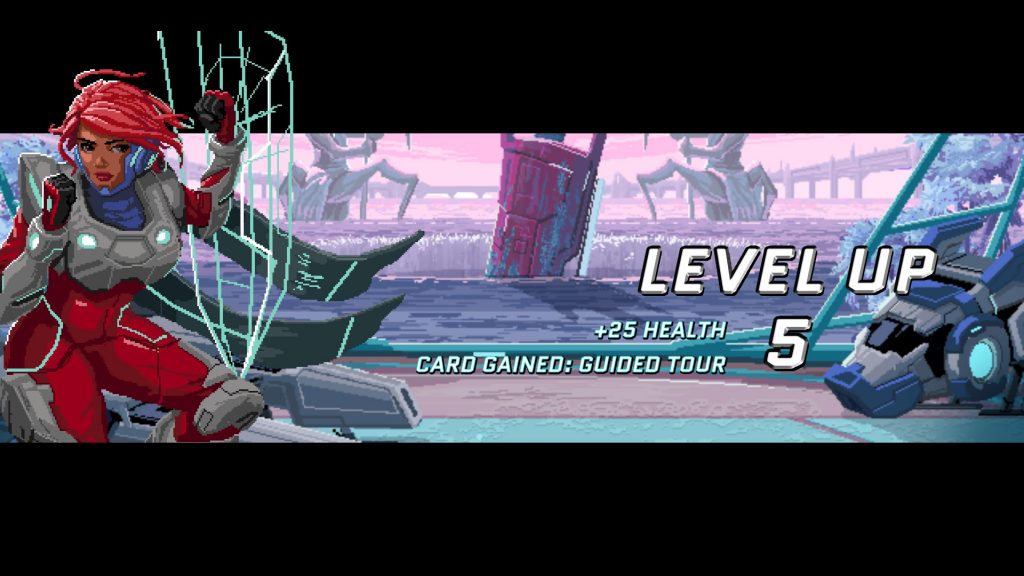 There is one problem though and that is my first run took about ten hours to complete. I’d say most Rogue games are over pretty quickly so you don’t mind running them again and again, getting a little further. Obviously you can save and exit at any time but even so if I’d got to the end boss and died, wasting about ten hours, I’d have been pissed and I’ve started another run now where that is obviously a possibility. Maybe I’ll figure out a party combination that’ll tear through enemies and speed things up considerably but if you want to unlock all the classes you’ll want to mix and match most of them eventually.

Controls-wise things map to a controller well with only having to scroll from top to bottom of a characters move list every time being a bit of an issue if you’re defending. Generally all the information is clear though there were times when I wasn’t sure why a delay wasn’t happening, although I knew it wouldn’t happen as the game previews the outcome of all your moves. Some moves are one time use and yet the game doesn’t always tell you that either.

Visually I’m actually quite a big fan. All the graphics are 2D pixel graphics but the sprites are nice and chunky but mixed with some great animation, lovely effects and lighting which really make the hits and explosions impactful. Apart from those hits the only sounds you get are the music which is also really well done, never becoming repetitious whilst getting you pumped for whatever level of combat you’re facing. 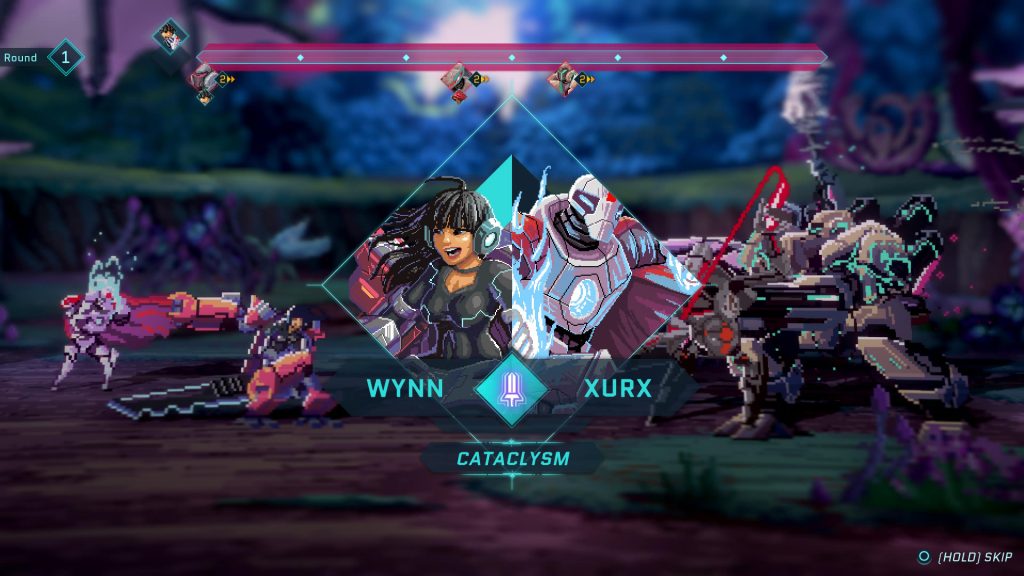 I’ve really enjoyed my time with Star Renegades. Ironically it’s time that is the main issue I have with the game, with it set in a genre all about replaying and repeating it demands so much of your time that for a lot of people it’s not really going to be viable. Still, even if you’re going to play it once it takes so long that you’ll get your moneys worth and if you like your combat to be tactical rather than twitch based then you’re covered very well.

Star Renegades
8 Overall
Pros
+ Incredibly tactical combat
+ Well balanced for a Rogue-lite
+ Great art and sound
+ Plenty of character unlocks
Cons
- Runs take a long, long time
- Not sure the unlocks are that game changing
Summary
Star Renegades is a very tactical, turn based Rogue-lite that offers a decent challenge on Normal but with far more options beyond that. The runs themselves are very long for this type of game and the unlocks, beyond the characters, don't seem very exciting but if the combat flow intrigues you then you'll find plenty to enjoy.