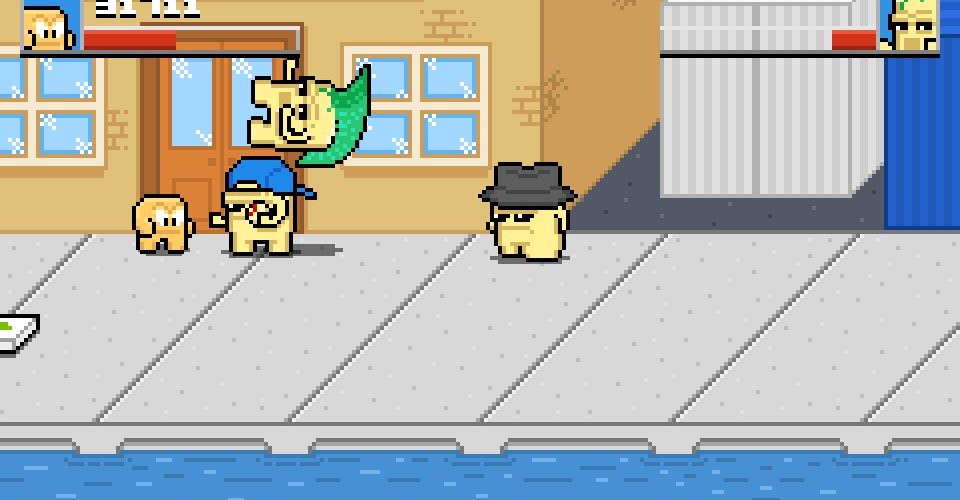 In my view low price indie games need to have a very clear idea behind them, something that can be easily summed up and executed.  Squareboy Vs Bullies: Arena Edition is a cheap and cheerful scrolling beat ‘em up in the same style as a Double Dragon or Streets of Rage and manages to do a great job at it. 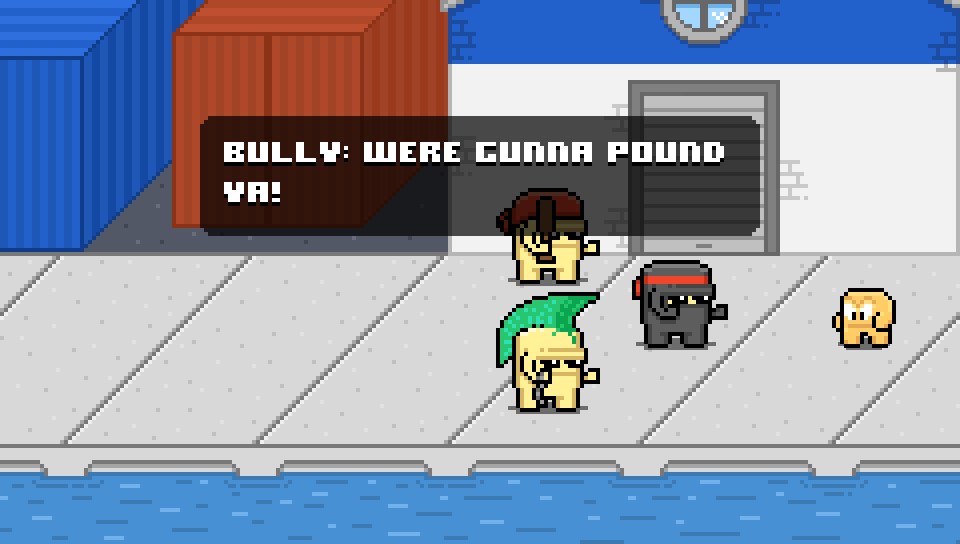 The plot revolves around the titular Squareboy getting revenge on the Bullies who’ve just beat him up.  In order to get his revenge Squareboy goes to train with a martial arts sensei and learns some kick-arse moves. That is the entirety of the plot and the brevity here is one of the games strengths, there is no need to go into a detailed backstory of who Squareboy is we just need to know how to punch. What little plot there is though is humourously told through short conversations and while the writing isn’t going to win any awards it is short enough and funny enough to be a welcome addition.

Control is kept simple with a single button for attack and a button for jump. There are a few specific moves you can do  such as uppercuts and leg sweeps and these are all activated through pressing attack as well as a specific direction on the stick.  Whilst the controls are simple they are responsive, crisp to use and easy to remember.  In keeping with other games of this genre though it is very easy to just fall back on using the same basic attacks though and the combat does begin to feel repetitive. 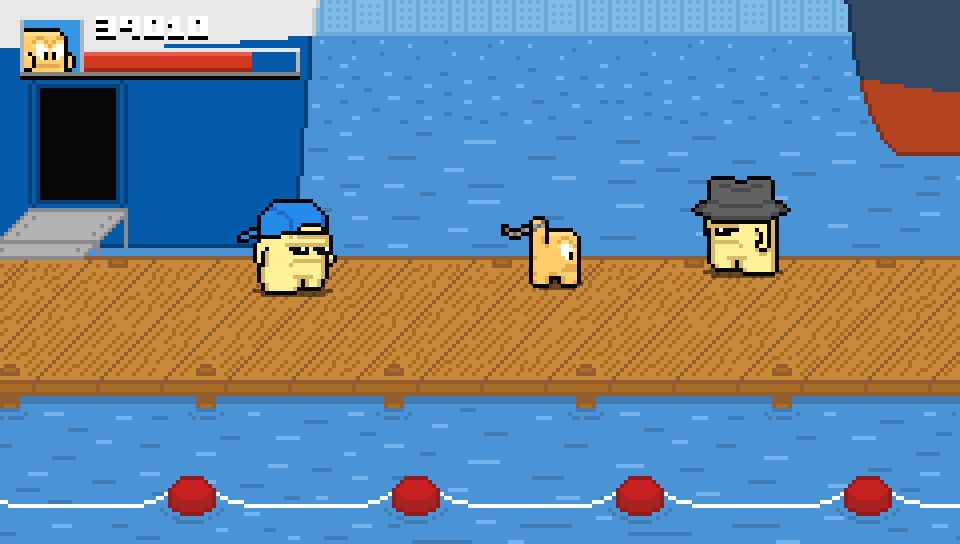 The enemies you face off against are all cut from the same mould with visual variation coming from the kind of hat they wear.  They don’t really display much AI, mostly just walking towards you and working to surround you, but fights can get frantic as you try to manage space and crowd control. They also have a tendency to stun lock you in place and beat you down, although you do have a counter move to help you escape these instances.  The action in Squareboy Vs Bullies: Arena Edition is pretty enjoyable despite the above limitations. 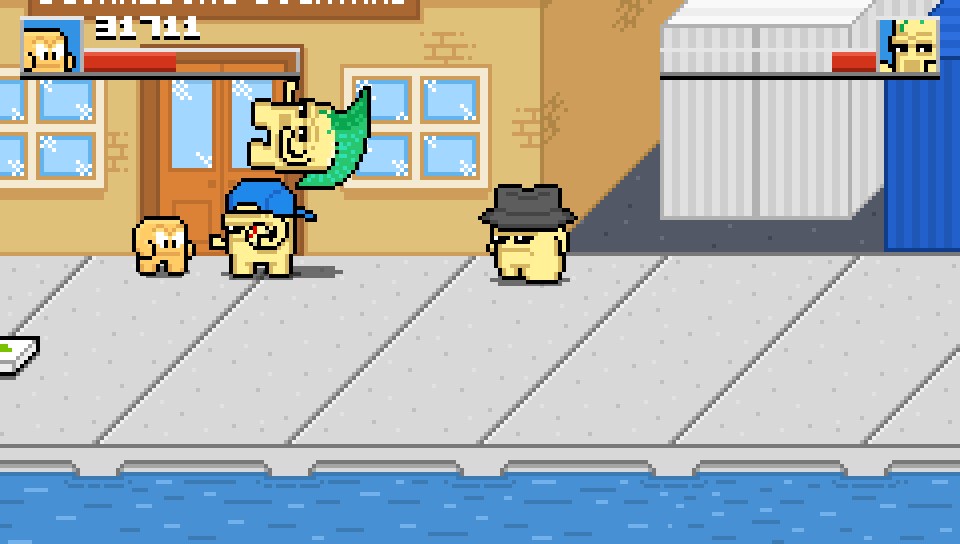 The front end is almost non-existent and there isn’t any kind of multiplayer option, which isn’t a huge surprise but is still a little disappointing given the types of games Squareboy is copying. There is an arena mode which is effectively a horde mode, but there is no real incentive to play it and it ends up just feeling like an odd, redundant, inclusion.

You also earn a score as you play the game, but there is no online leader board or way to compare these and the scores have no in game function other than to show the numbers going up. The whole game is over within a couple of hours too and, for trophy hunters out there, gives an easy platinum.

Graphically Squareboy is fine in a retro tinged way and while things may be a little simple looking there is a clear style on display. There are also some decent chiptunes for the 12 levels and while none of them are instant classics they are pleasant enough to warrant listening to. 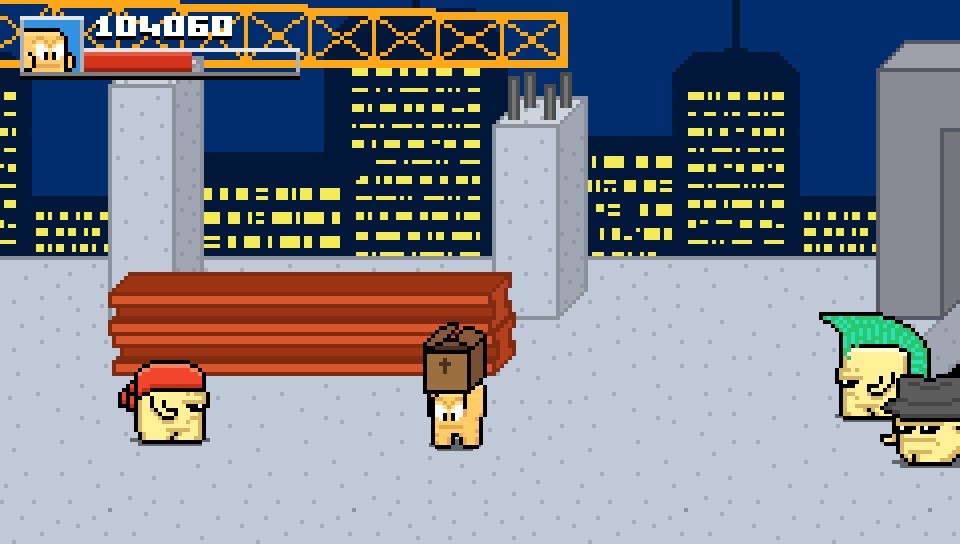 That’s pretty much all there is to Squareboy Vs Bullies: Arena Edition and as I said at the top of the review it manages to execute on  the scrolling beat-em up style very well. This isn’t going to be a game I’ll necessarily remember but it is certainly a game I enjoyed.  It is cheap enough to recommend as something to pass the time with and if you do decide to take the plunge there is enough simple fun to be had here.

Squareboy Vs Bullies: Arena Edition
7 Overall
Pros
+ Crisp controls.
+ Nice sense of humour about it.
+ Decent if simple graphics and music.
Cons
- Repetitive combat.
- It is all over in a couple of hours.
- Enemy AI is pretty simple.
Summary
Squareboy Vs Bullies: Arena Edition manages to pull off the scrolling beat-em up style very well. This isn’t going to be a game you'll necessarily remember but it is certainly a game you'll enjoy. It is cheap enough to recommend as something to pass the time with and if you do decide to take the plunge there is enough simple fun to be had here.

One thought on “Squareboy Vs Bullies: Arena Edition – Vita Review”