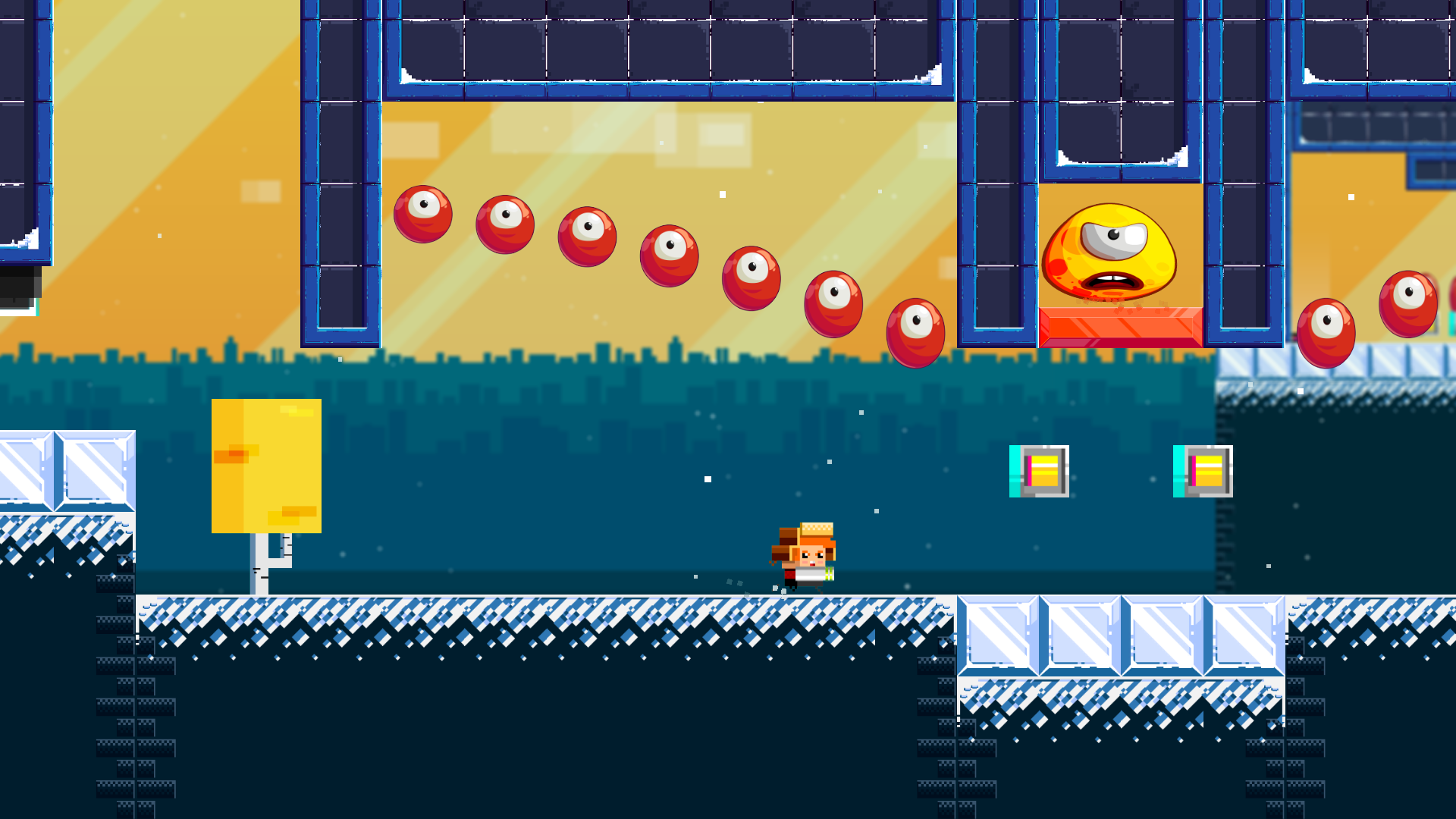 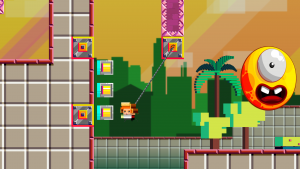 As far as indie games go Spheroids sticks fairly close to the standard model, being a 2D platformer with retro inspired graphics and tongue in cheek humour.  The story revolves around an invasion of planet Earth by the titular Spheroids and the quest of a young boy to travel round the world and eradicate them all.

Gameplay is a mix between a straight up platformer and something like PANG, as the weapon of choice is a sort of harpoon gun which launches upwards leaving a trail behind it.  It’s an odd mechanic which takes some getting used to, but seeing as the Spheroids seem to enjoy bouncing around there is ample opportunity to slip in underneath and shoot them.

The platforming is serviceable, I was confident to take on any jumps knowing if I failed it would be my fault rather than the games, but somehow the jumping was never really fun as it is in the best platformers.  It just felt sort of ok and unchallenging.  Initially the hero only had his jump to get around the levels, but after a bit a grapnel hook is unlocked and later still some reverse gravity boots.  These two new introductions are used to add a bit of variety to the gameplay and do work in this regard, although I felt the levels never made full use of the possibilities available, and overall I felt the levels liked to play it safe.

Although tasked will defeating all the Spheroids there is no benefit to doing so and it is easy enough to just avoid most things.  Every now and again though, the game blocks progression and the only way to progress is to take out all the enemies. These sections are almost like mini challenge rooms and often there will be environmental features which can be used to the players advantage.  It was in these single screen sections that the game most resembled PANG, which is no bad thing. 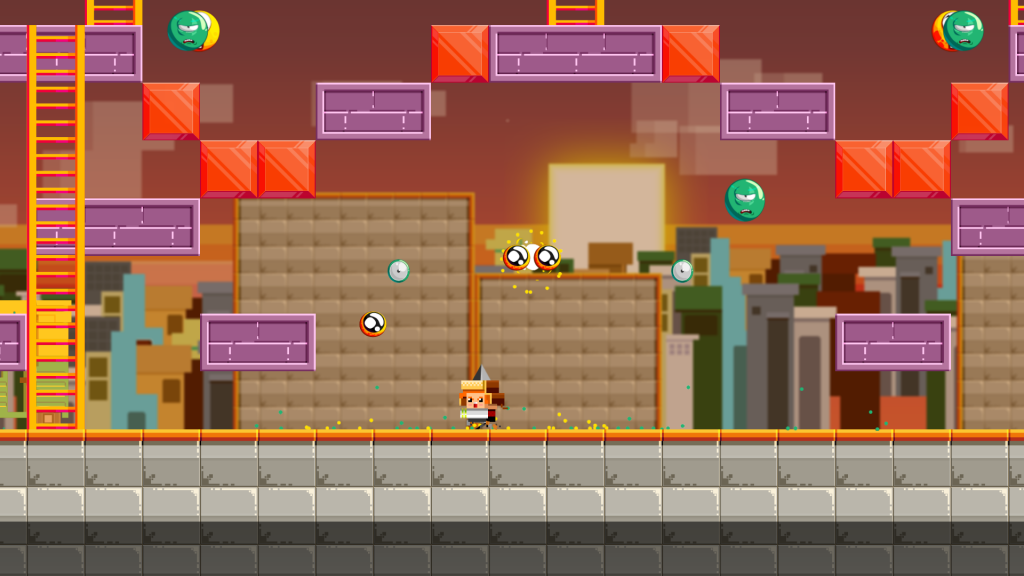 Oddly although I died a lot this game has zero challenge to it.  Each level has frequent checkpoints and death results in the player going back to these checkpoints, but weirdly the enemies remain defeated. What this means is there is no penalty to failure, literally nothing.  It’s handy that there is this easy approach to death as its something that I experienced a fair bit of in the challenge rooms.  These rooms can get busy from a sheer number of enemies on the screen, but given the fact enemies remain dead, on a second or third run at them the challenge gets gradually easier to deal with.

Graphically things look nice with a chunky 2D bitmap style, the fact the Spheroids are the only curved things in the game is a comical way of indicating the fact they are alien.  Each level is based round a new city and each city has it’s own musical theme. Its a nice touch and the music feels authentically retro, while none of the music stood out it was pleasant enough.

It is clear Spheroids is going for a comic tone, from the basic premise of spheres invading a square world, through to the cutscenes and loading screen hints.  Whilst some of the humour hit, it all felt safe and tame.  The game also does an odd thing with the cutscenes as these are totally silent, no music or sound effects.  This is really odd and actually made me wonder if something was wrong with the game.

Unfortunately the game wasn’t without some technical issues too.  On more than one occasion I experienced enemy Spheroids getting stuck on the scenery. This results in difficulties as it makes traversing the environment more tricky than it needs to be, and on the odd occasion this left enemies in inaccessible locations which stopped me from finishing the level. Additionally there is currently a bug on one of the India levels on the Vita which stops you from completing the level, and therefore the game, which is a huge disappointment.  The developer says a patch is coming soon, but this isn’t here at the time of my review.  The only saving grace is the game is cross buy on the PlayStation 4, which doesn’t have this bug. However the lack of a cross save feature between the Vita and PlayStation 4 is a huge shortcoming. 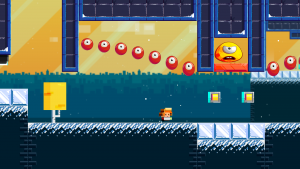 then is sort of ok, never really rising above being average.  It has ok presentation and offers some gentle platforming and shooting fun.  Although generally there are some minor technical issues the biggest issue by far is that there is currently a game breaking bug on the Vita.  Couple these technical issues with a lack of any kind of difficulty and the game is distinctly average.  If it wasn’t for the game being cross buy I probably would have scored this a four, but as it is the game is only partially broken, although it remains entirely average.

Spheroids
5 Overall
Pros
+ The platforming and shooting are done to an acceptable level + Graphics are ok, if not wholly original + The music is chirpy enough but not really memorable
Cons
- Marred by technical issues, including a game breaking bug on the Vita - Offers no challenge as death isn’t penalised - Humour doesn’t always hit home
Summary
Spheroids never really rises above being average. It has ok presentation and offers some gentle platforming and shooting fun. It suffers from some technical issues, particularly on the Vita. Couple these technical issues with a lack of any kind of difficulty and the game is distinctly average.