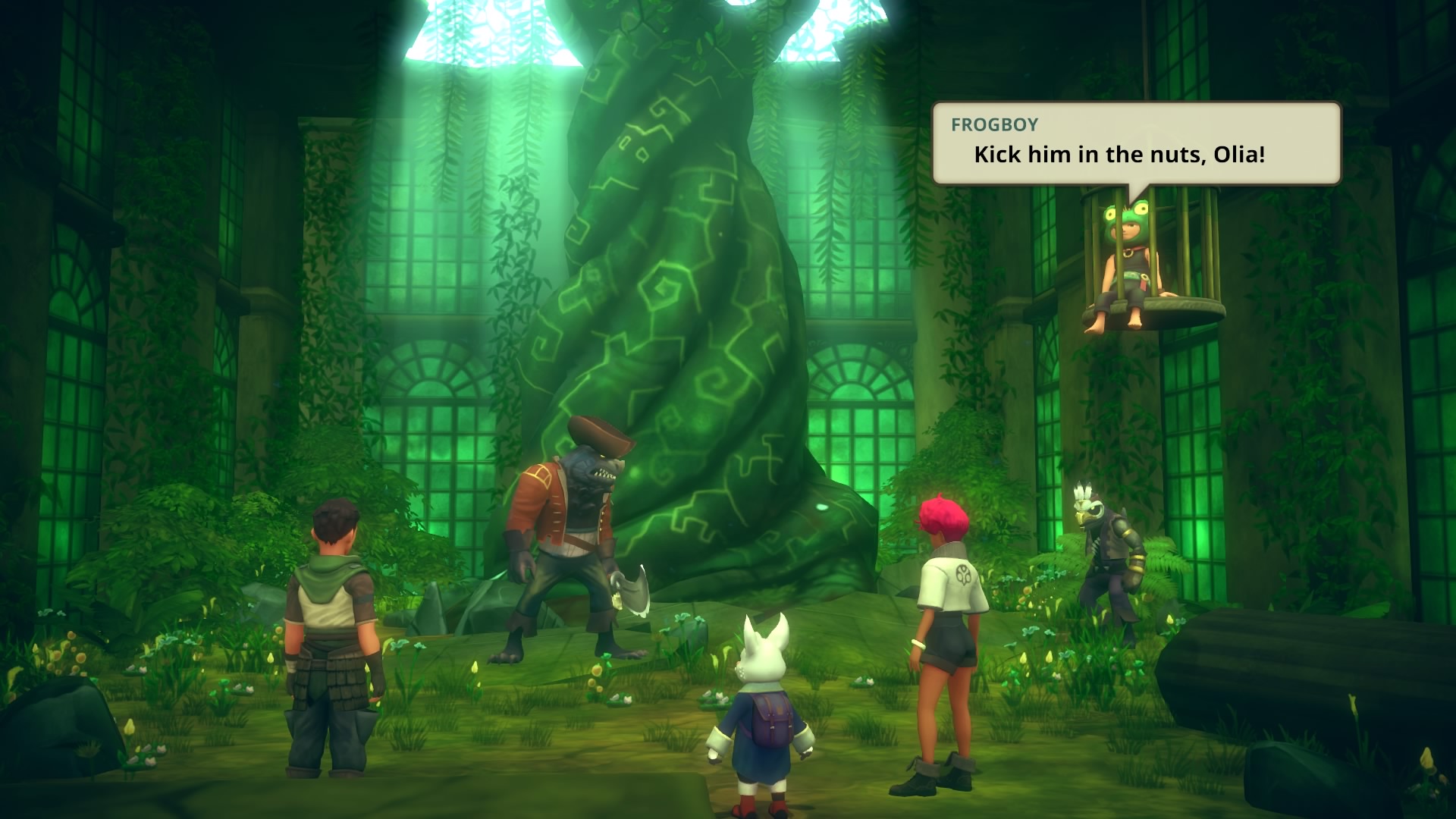 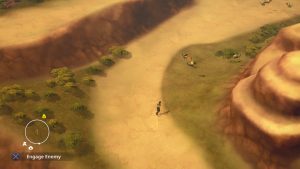 Earthlock: Festival of Magic is a JRPG, but created in Norway. It was released last year on other platforms after a Kickstarter campaign but has just been released on the PS4. The developers openly admit to being inspired by classic JRPGs, but can this come anywhere close to their quality?

Earthlock takes place on the world of Umbra which has stopped spinning, so you have areas in complete darkness, areas in perpetual sunlight and a few areas that are just right. There are multiple characters but the main is probably Amon, a scavenger who goes on a quest to save his Uncle and gets caught up with other characters along the way.

The story isn’t great. I looked up that first part on Wikipedia and describing the character’s personalities would be a tough ask. I have a very basic idea of who they are but strong characters these aren’t, which makes it tough to care about any of them. Thankfully the cutscenes don’t go on too long and aren’t that frequent.

Primarily you’ll be exploring dungeons and getting into fights. Enemies are visible and so can be avoided if you want but they can also be grouped together so you end up fighting more of them but get bonus experience once you win. In battle you line up against your opponents and take it in turns to fight. You have a lot of moves at your disposal, more unlocking as you level up, but rather than have a long list you can select a category with the d-pad and then press a face button twice, once to select the action and once to confirm it. It’s a good system that you get the hang of very quickly and selecting the wrong action is very rare. 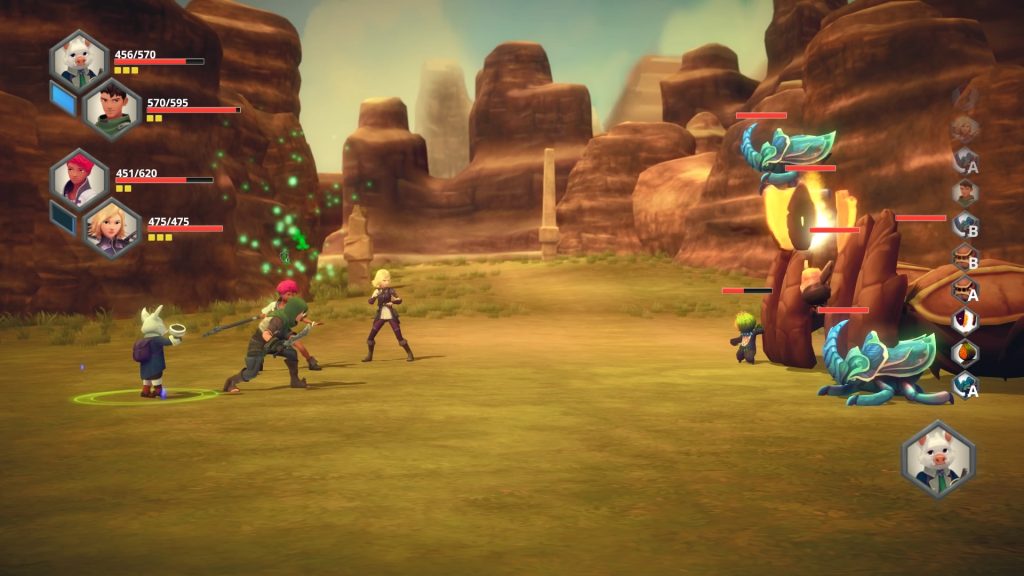 Buffs and traps are very important with your base healing spell healing over time as well. Certain buffs can be stacked and other moves can be combined to make them more powerful. A fire trap can be placed on an enemy by one character for example which will either set off if the enemy attacks with melee or you can attack that enemy with an explosive attack to set off the trap as well to do extra damage. Early on you won’t need the more advanced techniques against normal enemies but boss battles require a lot of strategy with you using the characters and skills that you have access to to both survive and do damage. They are a highlight.

You pair up characters to level up their familiarity with each other which grants them bonuses whilst that pairing is active and when you level up you gain TP. TP is used to unlock sections of the Talent Board. There are three different components to the Talent Board, one boosts stats which you can put many different cards into (if you have them) such as an attack boosting one or a magic defence one, one grants you a passive ability and one unlocks a new skill for your character. The locations of these components is set and you can only unlock one adjacent to one you’ve already unlocked which leads to you planning a move or two ahead to make the most of your TP.

It’s an interesting system that means the game can restrict your development to a point as you won’t gain certain cards until specific points in the game. Once a card has been placed you can swap it with another card if you choose so you can’t make any permanent mistakes either, though you must switch one card for another, you can’t simply remove one.

There is also a crafting system. Shortly into the game you can warp to an island which has a garden where you plant seeds you collect. You must then keep them watered and collect from them regularly. These items you collect can then be used in crafting ammo for special attacks or healing items. You can also use items you collect or steal from enemies to craft cards for the Talent Board. I like that the garden gives you a constant stream of important crafting items but the collecting and watering of flowers felt like busy work that could probably have been streamlined. 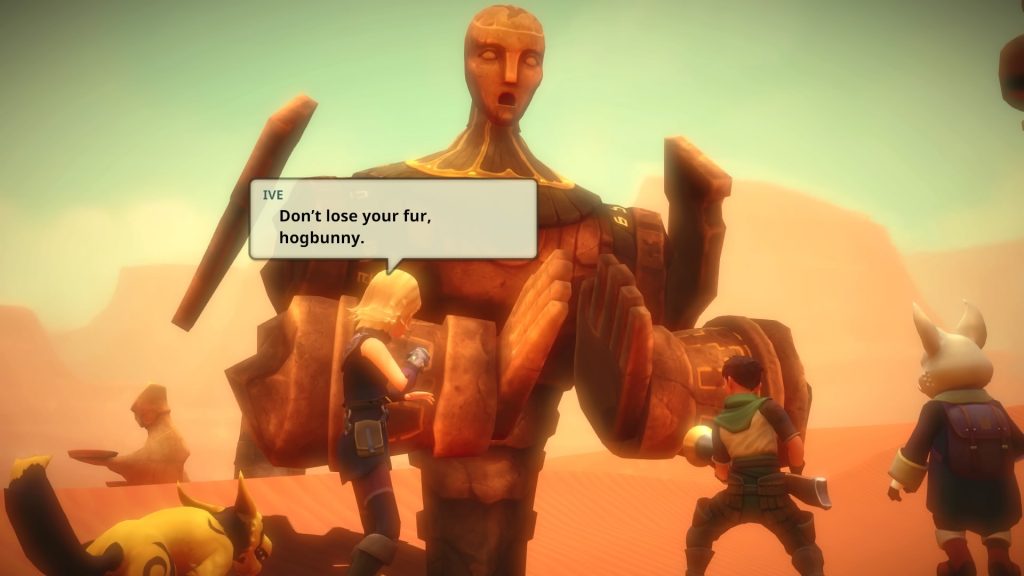 Similarly there are save points dotted about that you can save at, but also warp between. Well, I say between but you can only warp to the island, but from the island you can warp anywhere, which begs the question why can’t I warp anywhere from all of them? It’s also free to stay at the inn on the island but rather than making me warp back, heal, then warp back to where I was can’t you just let me heal at the save point? If you want all the enemies to respawn then make it like Dark Souls where resting at the save point would do that.

There are just a couple of decisions which I understand but could have been improved for the players benefit. This will come down to taste but I also found that everything took a long time. Exploring dungeons would take a bit too long with a save point at the beginning and at the end, none in between. This was primarily due to the battles which even against the basic enemies can take minutes. This is exacerbated by the mechanic of grouping enemies together as the more enemies you fight the longer it takes but also a quite high miss/glancing blow rate and enemy attack animations can be overly and unnecessarily long. Snappier fights would do this game wonders, though I appreciate the longer boss battles.

The lack of sound doesn’t help. There is some basic music playing constantly that does change between zones but I couldn’t hum any for you right now, not even a battle theme. Beyond the music there are a few sound effects but most things don’t generate any sound which makes everything feel muted and makes it feel less believable. It’s a shame as although not technically great the graphics do have a charm with a strong use of colour. 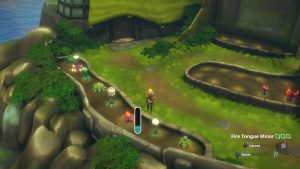 So Earthlock: Festival of Magic is a bit of a mixed bag. Nothing is game breaking and the pace of the game comes down to personal taste but for me I found enjoyment in the boss battles but grew frustrated with the time it took to do most things. The story won’t keep you hooked but there are a few interesting systems in place that make levelling up fun and the character skill variety is excellent. There is fun to be had here for the right person, but bear in mind that if this game was released back in the day, amongst the games that inspired it, then we probably wouldn’t be talking about it today.

Earthlock: Festival of Magic
6 Overall
Pros
+ Great boss battles + Lots of character skill variety + Some interesting mechanics
Cons
- Battles are very slow - General presentation could do with a little more attention - A few elements could be tweaked for the player's benefit
Summary
Earthlock: Festival of Magic has some neat ideas of its own to add to those it borrows from its inspiration. Boss battles are a highlight but general dungeon exploring feels slow and laborious. The story and characters are also weak but there is some fun here, just not for everyone.