Speed Limit is a very varied arcade-style title from Croatian coding crew Gamechunk.  It’s a game that draws heavily from several sources of inspiration.  So much so that it’s central theme is variety.  Sure, it’s a 2D run and gunner initially but the game takes you on some incredible twists and turns.  We’re going to talk about them but we are conflicted about it because some of this stuff is just so cool to see in game that we do recommend that you check it out first (spoiler: we’re giving the game a solid 7).

Still with us?  Well, let us continue.  So, yes, the game presents as a 2D run and gun game set on a train.  You play a nameless protagonist who finds themselves on a travelling on a train before everything kicks off and you find yourself being attacked by spies and enemy soldiers.  The game tells you to ‘RUN!’ and so you head right and die almost immediately.  You restart.  You die again.  And again.  And again.  Each time you get a little further before some new threat kills you, be it a room full of people throwing knives or special forces types landing on the roof of the train shooting at you. 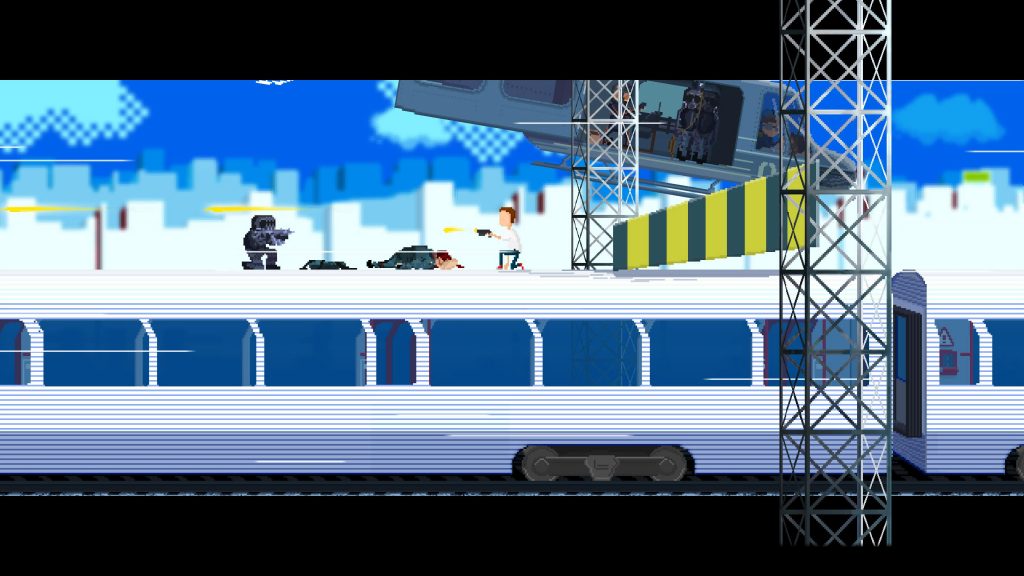 It’s quite shocking though just how hard it all is but thankfully the game offers lightning quick restarts and reasonably generous checkpoints for every twenty seconds of progression or so.  It’s pretty alarming how easy death comes to you.  Most of the time it is impossible to prepare for.  Getting shot in the legs in the dark, a knife coming from off-screen, a rail signal taking off your torso.  Death is quick and hard to avoid and so progress is slow.  A flawless run would probably be ten minutes but our first playthrough went way past the hour mark.  Some situations often seem desperate, impossible even but there is a way.  You just have to Groundhog Day your way through.

The game is relatively easy to control with movement on the d-pad/left stick and then you have two action buttons.  One is your fire button, the other is a mixed-use ‘action’ button.  Thankfully you can re-bind these from the game’s pause menu, which you’ll want to do because your thumb/finger will get pretty tired.  There’s no auto-fire but also there’s not limit on your ammunition, so constant shooting is your best hope to get through the game. 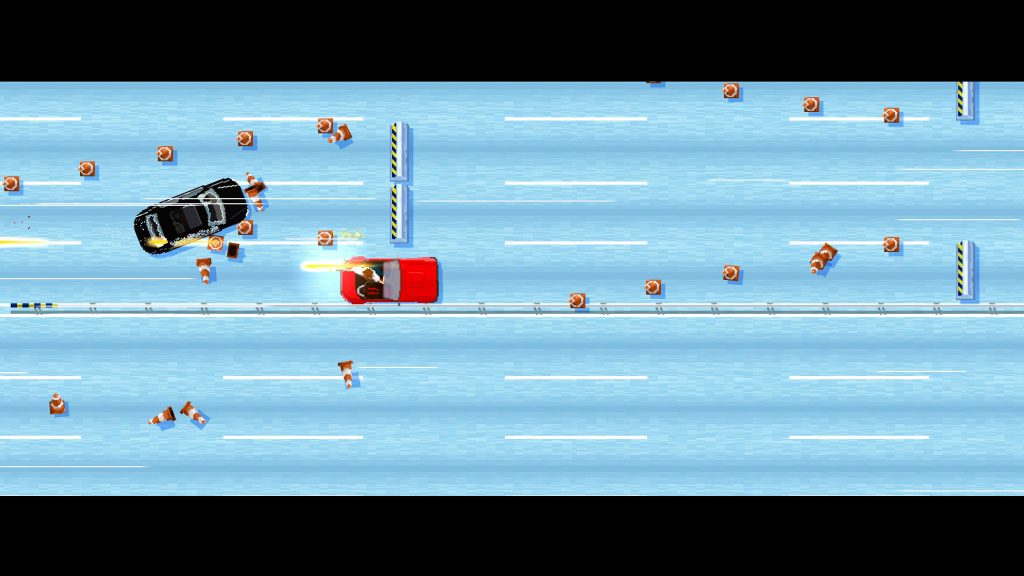 After quite a few minutes of battling through the train, you’ll find yourself on top of it.  You’ll still be battling enemies but will now have to watch out for rail signals that you’ll either have to jump over or duck under, just like any good action movie.  Eventually, you’ll come to a stop and you’ll jump from the train into a car.  At these point the game, rather seemlessly, switches from being a side-scrolling run and gun game to being a top down driving game.  It switches from a horizontal at parts to vertical (think Spy Hunter if you’re suuuuper old like us) and has you shooting at other cars while trying not to crash your way into an immediate grisly death.  Again, you’ll die often.

From there the game will switch it up time and time again.  From a standard 3D motorbike game (like Super Hang On), an isometric helicopter shoot ’em up (like Zaxxon but… er… with helicopters) and even a sort of Afterburner (but backwards) jet fighter section.  The constant reinvention is a triumph, especially if you’re familiar with the arcade inspirations that this game is drawing on.

While this makes for an entertaining and actually pretty exciting experience, especially if you don’t know what is coming, there are some issues.  The first one is the difficulty.  This is a bold choice and isn’t in any way gamebreaking but the constant deaths mean that what could have been a really good, flowing experience is a somewhat hampered by the fact that you are restarting some checkpoints dozens of times.  And when you do start a new section, you’ll be dead within ten seconds so you don’t really get to enjoy it and take it in. 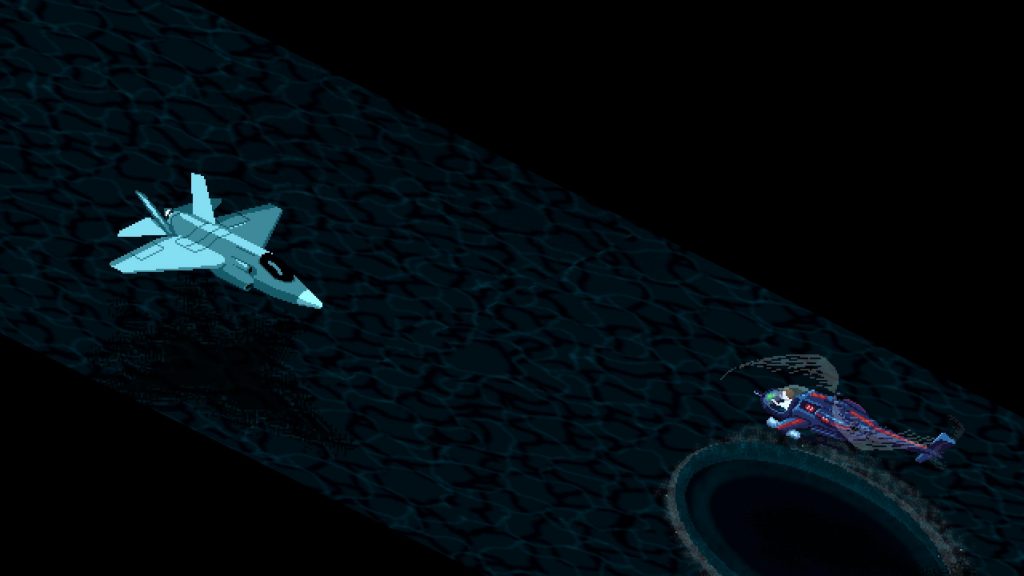 The other big problem is that not all of the sections are as good as others.  While the on foot, driving and motorbike sections work well (although the motorbike part is unbelievably frustrating), the helicopter section is absolutely horrible to play (and somewhat confusing because of its forced isometric viewpoint) and the jet plane part is visually unclear and so it takes a long time to figure out what you are doing wrong.  The game’s end boss is also something of a chore to get through.

So after an hour and half-ish of frustration, we were left feeling happy that we’d beaten the game and especially pleased to have experienced all of the varied gameplay it has to offer but we couldn’t help thinking that we would rather it was more traditional in terms of its difficulty.  If the challenge was toned down but you were switching back and forth between the gaming styles, this would have been better.  A ninety minute game where you revisited certain modes of transport and made more solid progress would have been amazing with this engine.  But like we said, the difficulty was a bold choice and the rapid checkpointing means you can brute force your way through the game, even if we would have preferred a more skill based approach. 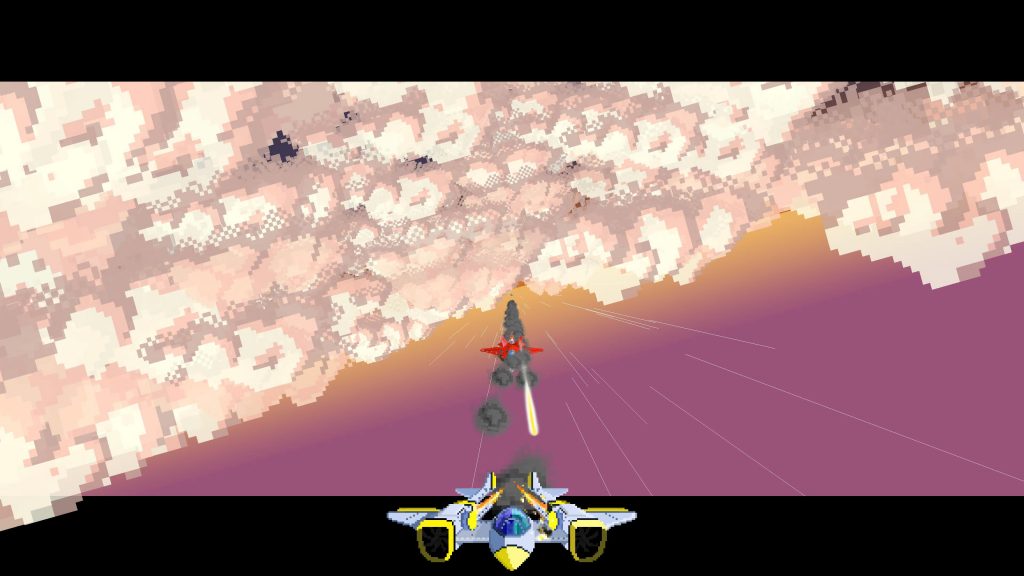 The game’s stylish, neo-retro visuals are really good for the most part.  As we said, sometimes the gameplay isn’t always clear but for the most part the game is full of colour and character and moves along as a tremendous pace.  The way it switches from one gameplay style to another is really well represented too.  We’ve often said that games are about two things:  give me something interesting to do and give me something interesting to see and Speed Limit does this way more than most indie games.

While we wish it was a bit more traditional in terms of progress, you can’t help admire what Gamechunk have done here.  Speed Limit is a what happens when you blend a heap of retro gameplay styles together and turn up the chaos to the maximum.  That makes for a short-lived experience but there is plenty of replay value to be had if you want to ‘master’ the game and not just brute force it.  You’ll need a much better memory than what we’ve got though!

Speed Limit
7 Overall
Pros
+ Genuinely takes you on a gaming journey
+ Great variation
+ Fast checkpoints and restarts
+ Well presented with stylish visuals
Cons
- Relies a bit on brute force rather than skill
- Can be very frustrating
- Some sections aren't as good as others
Summary
Speed Limit's tough, and frustrating, gameplay might mean it doesn't flow quite as nicely as we'd like but you have to admire the way it combines a heap of classic gameplay styles into one cohesive title.