Just in time for the real series to get underway, Ashes Cricket arrives from Big Ant studios. With their work on the Don Bradman series already under their belt, they have undertaken a partnership with Cricket Australia to bring the most hotly contested test series back to consoles. Does it ensure some big strides or small steps towards the crease? 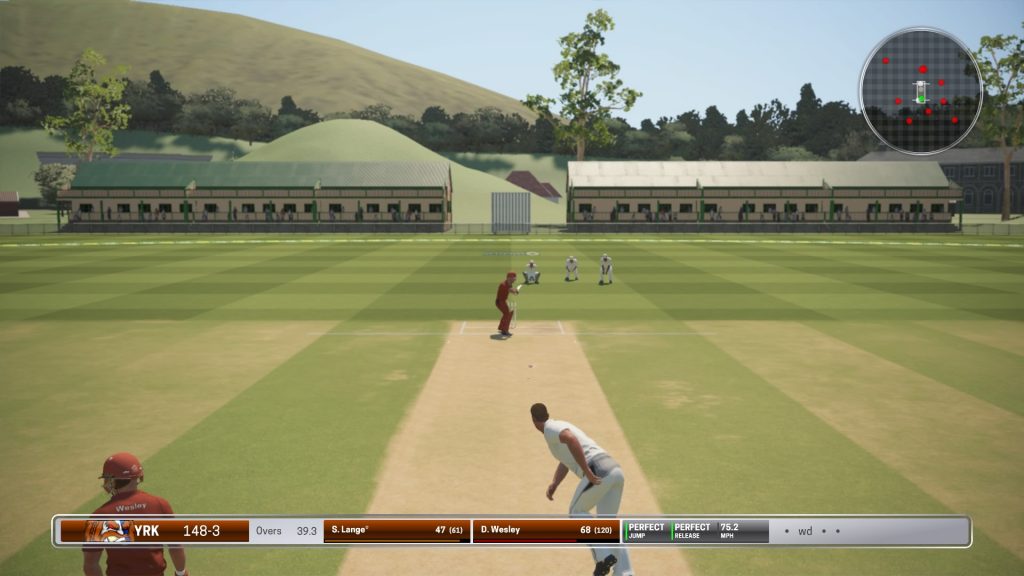 The Cricket will be familiar if you’ve already dabbled with the Don Bradman series. A lengthy tutorial is on hand to help newcomers and it’s clear Big Ant want to represent the sport as deeply as possible whilst trying not to bombard the player with too much. Bowling comes with a wealth of options that can affect pace, spin and direction. It feels like a lottery at times but it’s rewarding to bowl a maiden over or take a wicket. Discovering what works can be fascinating and it feels as strategic as it should be.

The same depth carries over to the batting side. You have to pay attention to footwork and look for gaps in the fielding. You need to know when to play aggressively or defensively and, whilst cricket tends to look like a slow-paced game, there’s always something to focus on. Mistakes tend to fall on your shoulders rather than down to luck. Both bowling and batting is animated well. With the licensing, they’ve applied some animations specific to key players which is great to see. Attention to detail like that is where this game starts to separate itself from it’s predecessors. You’re given feedback on all aspects of your time with the bat and ball in relation to your timing, footwork and pace. It’s not hugely detailed but it does help you dial in your game. 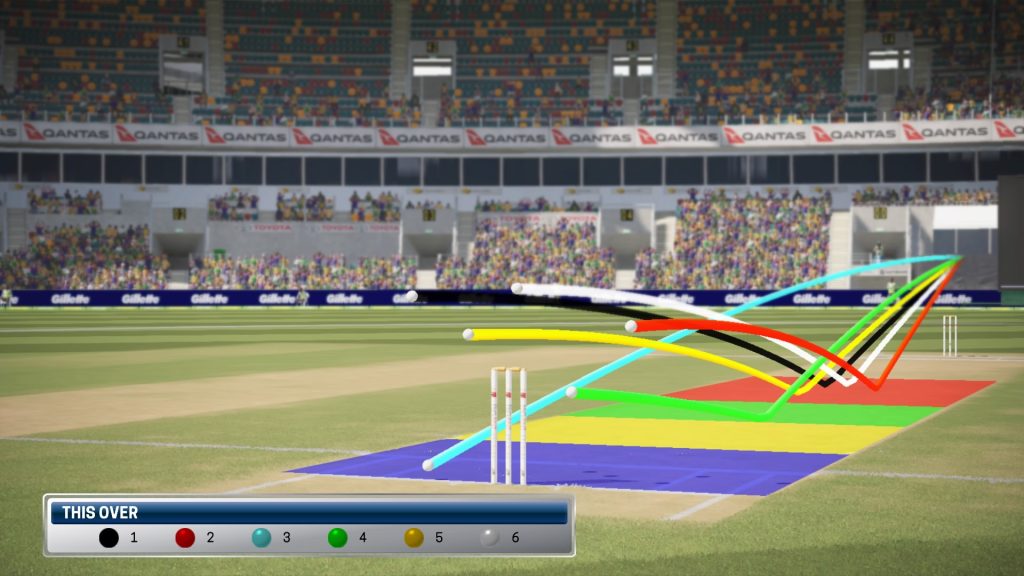 That said, fielding still feels troublesome. Some easy catches are missed and there’s sometimes a lack of urgency when they need to chase a ball down. It’s been a returning issue for the series and Big Ant still haven’t quite nailed it. With the other aspects of the fundamentals being so well done, it’s not a big complaint but it can be jarring to see a casual catch be dropped or a ball trickle to the boundary at walking speed.

For a game focused on the Ashes tour, there’s plenty of other competitions to take to the crease in. Divisions in India, England, Australia and the other colonial powerhouses and you can play through them in a number of ways. Shorter versions of the game like T20 feature, as well as the traditional marathon of five-day cricket. Matches can be stopped and resumed at will so those pressed for time can be accommodated. There’s an abundance of places to play and ways to play which should keep fans very happy. Online counterparts bolster this even further and, whilst the community for Ashes Cricket isn’t large, it does seem active with leaderboards for all the variations on offer. There’s also a fully-fledged career mode for those who want to develop a fledgeling superstar or one of the game’s existing players. It’s a deep and involving way to get to grips with the engine outside of the cages and tutorials.

Presentation and visuals seem to hold station from Don Bradman’s Cricket 2017. It looks functional without any real flair or major improvements. It’s a shame as I was hoping the Ashes license would bring with it some nice touches. Instead, the main series is presented much the same way as any other game of cricket. There’s little pomp or circumstance which, for a show-piece mode, is a disappointment. The same camera shots cycle through and everything becomes familiar within a couple of matches. 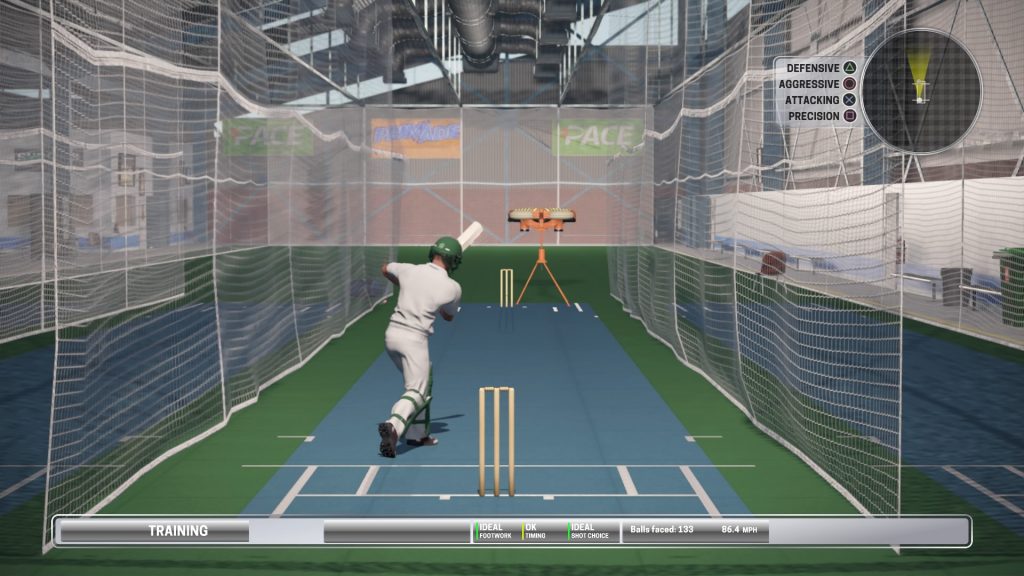 Commentary lines are delivered well but there’s a distinct lack of things to say. Phrases repeat very quickly and, whilst it broadly relates to the action, there’s not enough of it to engage. It’s nice to be encouraged during a good over of bowling or after hitting a six but it’s too quiet to really hold my attention. Menu music is surprisingly charming with some generic rock with some cricket-associated titles and the sound of the bat striking the ball is very satisfying. It’s also worth noting the reactions of the fielders are a good indication as to whether your shot’s going to land you in trouble. Batsmen shout when a run is on and demand you wait. It’s a nice touch that makes you feel the other guys and girls on the field are aware of the match around them. It holds itself together technically but there’s some lengthy load times when entering into a match. The rest of the package runs smoothly. 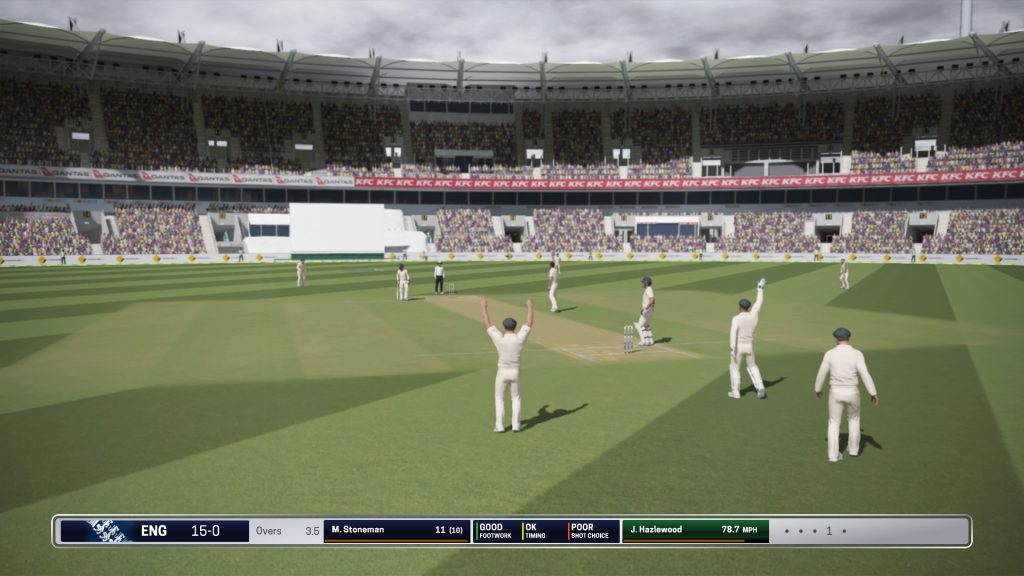 Whilst Ashes Cricket features the likenesses of the England and Australian setup, the remainder of the cricket world sees a generic bunch of imposters. Luckily, the editing suite on offer is extensive and the community is willing to provide authenticity when licensing just can’t cut it. The results are quite impressive and importing new players and teams is simple enough. It shows how active the community is around Big Ant’s products and it’s quite a ringing endorsement to see the fans produce work of such quality.

Ashes Cricket might feel like a quick rebranding of an existing game but the small tweaks and the licensing does add little touches that may entice fans back after 11 months. There’s a lot of content to dive deep into and the gameplay manages to offer depth. There are some aspects where it flounders and the visuals are functional, if not polished.

Ashes Cricket
7 Overall
Pros
+ Engaging, deep gameplay.
+ A wealth of teams to play with.
+ Plenty of variations on offer for those that want a shorter form of cricket.
+ Players are, for the most part, animated well.
Cons
- Fielding AI remains troublesome.
- Presentation remains largely untouched, in spite of the Ashes license.
- Load times can be lengthy.
Summary
Big Ant have managed to enhance last year's effort with some official licensing and, whilst the presentation feels familiar, the player animations look improved and authentic. Fielding remains something of a worry but the batting and bowling experience remains thoroughly engaging and satisfying to succeed at.