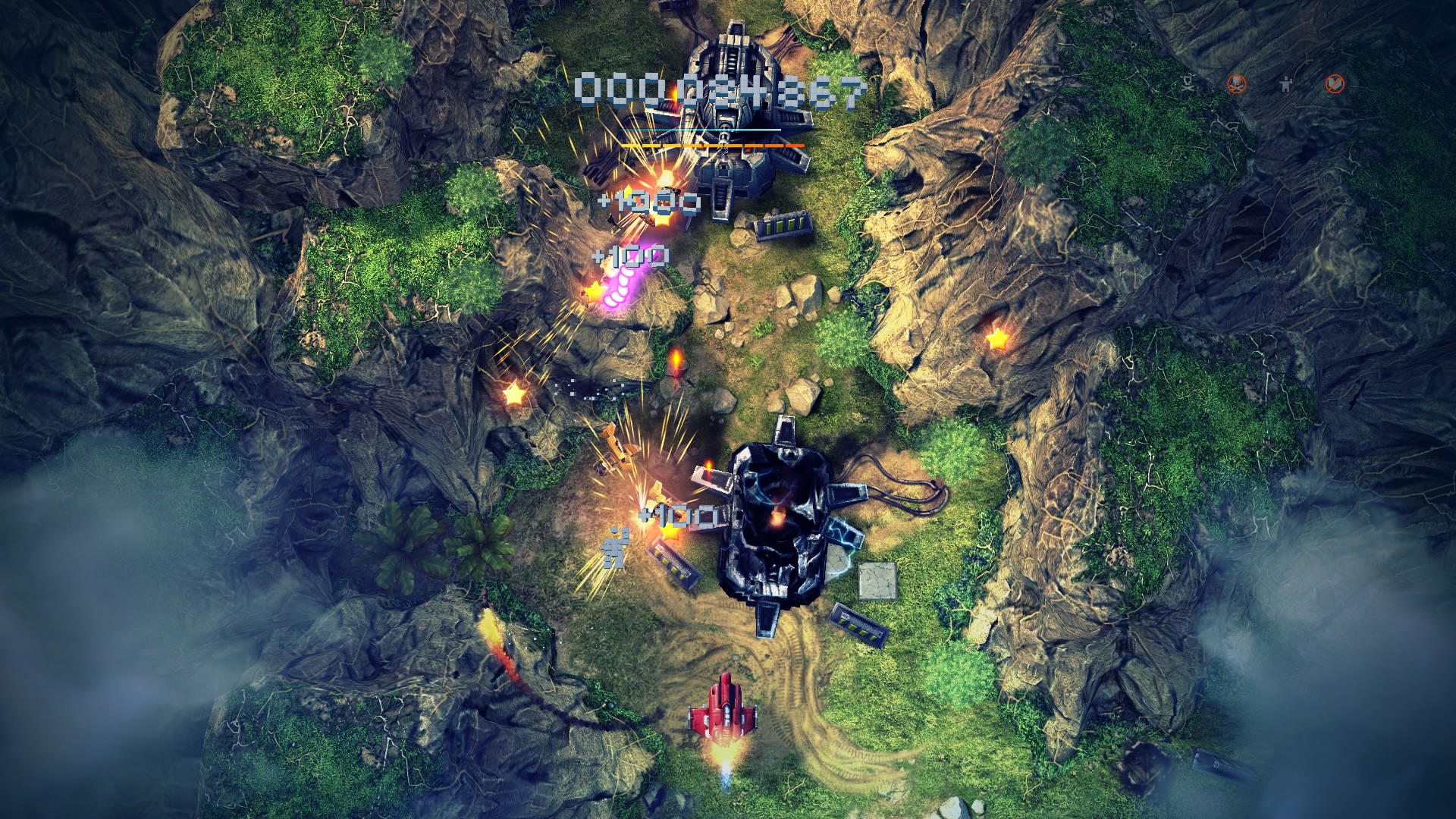 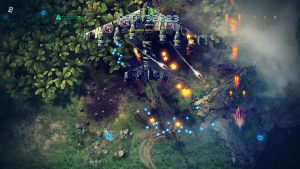 A while ago we covered Aces of the Luftwaffe, which I described as ‘made for mobile bullshit’ and I was right.  Taking a game with mobile roots and bringing it to the big boy consoles is fine but it takes a bit of judgement.  Simply rotating the screen 90 degrees and keeping the same IAP grindy structure but without the actual ability to buy progress made it a particularly hateful game.  Hence the 2 out of 10 that the game got.

Sky Force Anniversary hints at that same IAP issue but is a case study in how to override a flawed gameplay component by making the core game very good indeed.  Although, as with Aces of the Luftwaffe, it does have its roots in mobile gaming too.

The game itself is a port of the PC title which itself was a ten year anniversary edition of the original Sky Force.  It is a resolutely old-school vertically-scrolling shoot ’em up which takes its cue from the old Capcom arcade classic 1942 which is to say that you’ll be flying over land and sea taking out enemy aircraft and a host of ground units and boats.  It’s standard stuff really but if you’ve got a fondness for the really old school shoot ’em ups then it will feel deliciously familiar.

Interestingly, the first time you play the game it goes seemlessly from the developer ident right into the action.  It catches you unaware (well maybe not you if you’re reading this) as you wait for a menu to pop up and then realise you’ve got control of your plane.  Soon after, you’ll come up against General Mantis in his super boss plane.  And he’ll quickly dispatch you.

At this point you’ll realise the game hasn’t really begun.  Stripped of most of your firepower and extra tech, you begin again in your new plane and this is where the main gameplay loop establishes itself.  You see, Sky Force Anniversary has eight levels and they aren’t particularly long but much like Aces of the Luftwaffe, you’ll be expected to replay them several times.  The first reason is to unlock medals.  Medals unlock the later levels and are awarded for destroying 70% of enemies, 100% of enemies, rescuing people and beating a level without taking any damage.  These can all be done in one run but they don’t have to be.  So sometimes your 100% run might go better if you don’t worry about taking a stray bullet. 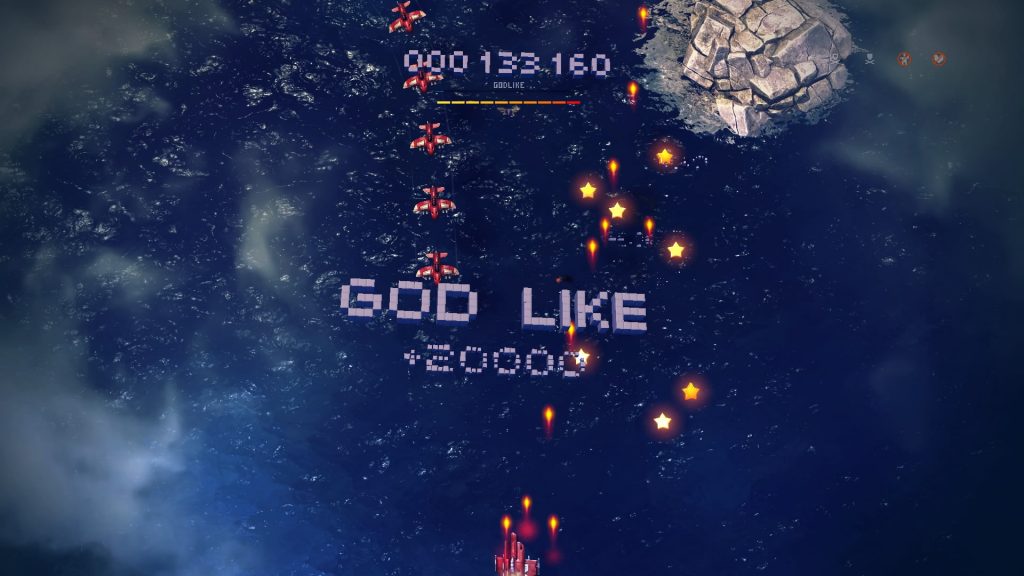 The other reason for replaying levels is to earn stars.  Each downed enemies drops them and stars can be spent on powering up your plane.  Upgrades aren’t cheap but they’ll allow you to build up your main bullet power as well as adding (and upgrading) wing cannons, lasers, bombs and shields.  A handy magnet power up also helps you gather up those stars as well but it also needs to be upgraded before it gets particularly useful.

Now truly I feel that the way forward with shoot ’em ups is to pitch the levels perfectly and just let you get through them based on skill.  In Sky Force Anniversary you can brute force the game by simply grinding stars until you are best qualified to get those new medals and while I’d prefer to lose all that and just have the level playing field of every player having the same plane, this does work because, honestly, just because it’s so very addictive.

So, yes.  Success might be a skills thing or it might be a persistence thing.  Either way, it’s fun to play.  Not taking damage on the stages will test your skills and with each level coming in normal, hard and insane variations, everyone will find their level of challenge eventually.  Playing on harder levels will also earn you more stars, speeding up the upgrade process a little.

The grind is a factor for sure and also the game does lack a bit of variation, apart from one stage where an EMP is relentless chasing you, so you may tire of it but as of right now – several hours and trophies in – I’d rather be playing it than writing about it. 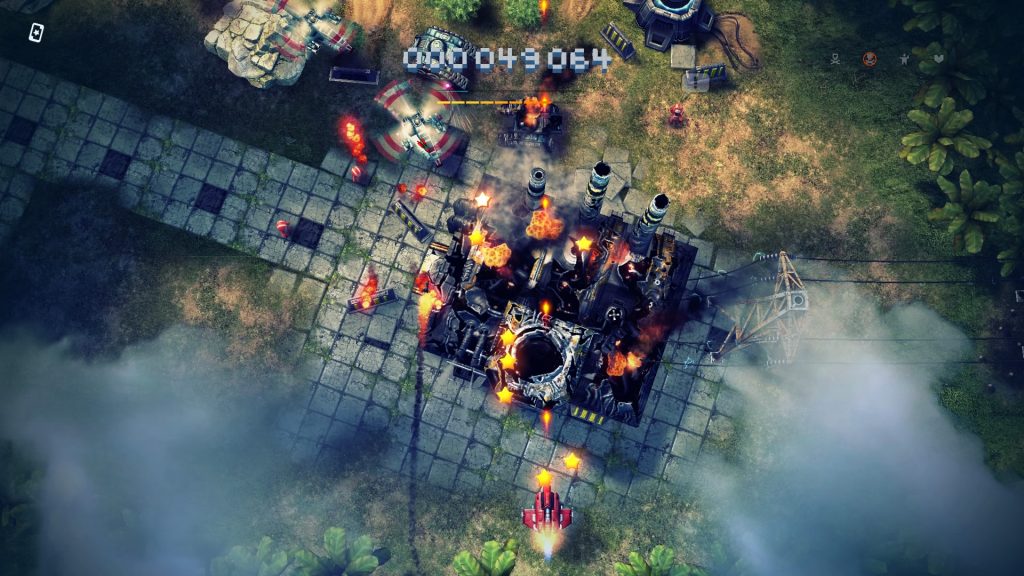 Aside from the gameplay, the game is nicely put together.  It certainly looks lovely with nicely detailed graphics seen from the usual top-down view point.  It uses a proper engine rather than flat 2D visuals and it looks pretty good for a download-only game.  The soundtrack is authentically arcadey as well and adds a bit of atmosphere, as do the voice overs.  The let down is that many of the levels look identical and recycle a lot of graphical assets but the slick controls and addictive upgrading mechanic and medal grabbing will probably keep you distracted from that.

On top of that, you also get two-player couch co-op (no online though) and, best of all, it’s cross-buy on PS4, PS3 and the Vita.  Also, it handles cross-saving with the minimum of fuss ensuring that you can continue your upgrading progress from console to console.  I was particularly chuffed with that feature and the game looks and feels great on the Vita which is a real bonus. 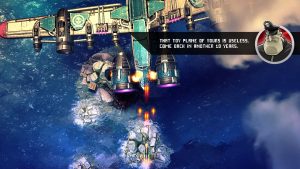 While the grindy stuff and lack of variety do harm the game a little, this is one of the better shoot ’em ups on PSN which clearly respects the heritage of the genre.  By taking an otherwise short and basic vertically scrolling shoot ’em up and adding a huge heap of replayability, Sky Force Anniversary may well keep you hooked.  It might not be for you if you’re the hardcore, 1CC type of shoot ’em up fan though but for us slightly more casual folk this is a lovely way to spend plenty of hours getting shot out of the sky by an evil army.

Sky Force Anniversary
8 Overall
Pros
+ Addictive upgrading system
+ Smooth controls
+ Well-designed levels
+ Decent visuals and soundtrack
+ No ground attack button
+ Full cross-buy and cross-save
Cons
- Relies on grinding (albeit not terribly)
- Levels are kind of samey
- Leaderboards are pointless
Summary
A solid vertically scrolling shoot 'em up with an old school vibe. More 1942 than Dodonpachi, Sky Force focuses on classic arcade skills rather than hyper-aware bullet-hell evasion. While it can be pretty repetitive, it's addictive enough that most gamers won't care. Sky Force is simply a lot of fun.