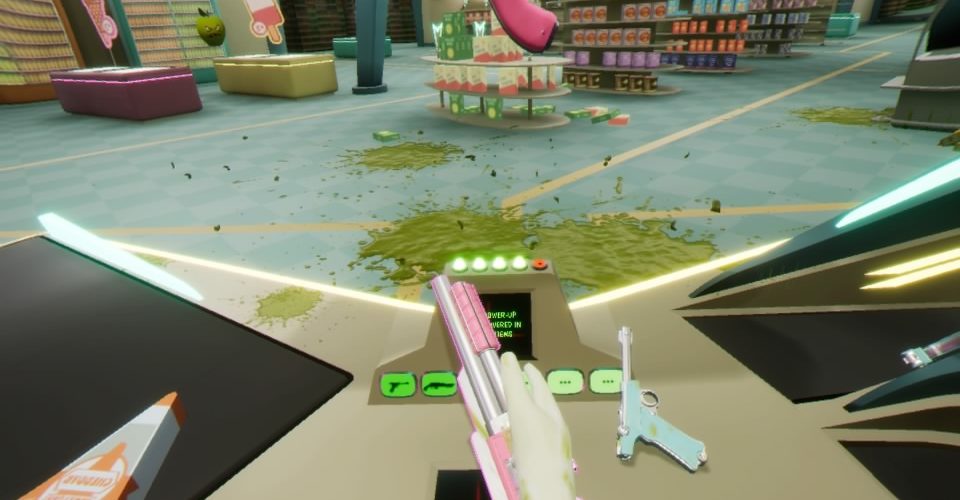 Shooty Fruity is yet another shooting gallery affair for the PSVR headset and usually that might be enough to send you to sleep immediately but this game is worth another look.  While, yes, it’s another PSVR game that has you pointing your two Move controllers at things and pulling the trigger, Shooty Fruity adds menial tasks to the mix.  Now that might sound like a way to make a game worse but nDreams has used it to make one of the most fun PSVR games we’ve played in a while.

You play as a supermarket employee who has to perform one of three tasks across the game’s 24 stages.  You’ll either be scanning items on a conveyor belt, filling up canteen trays or packing carrier bags.  Just like you’d expect (well, in that kind of job, not so much in a game).   However, this supermarket has a problem with murderous fruit and so you’ll also being blasting them away while performing your usual duties. 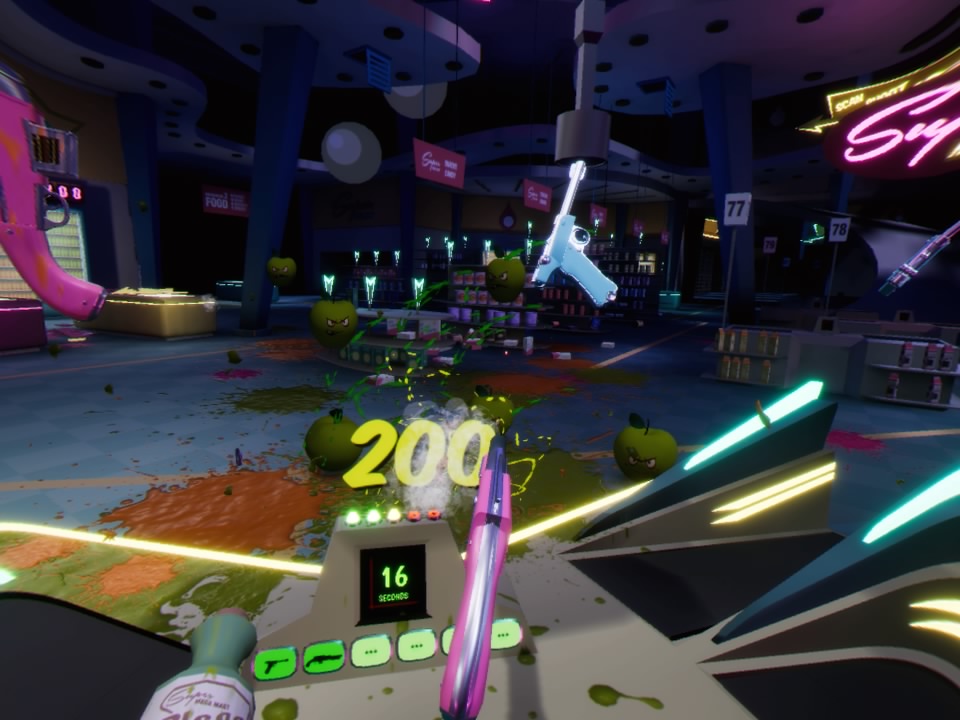 These two gameplay elements are at odds with each other in the best kind of way.  If you focus on your day job, the fruit will get you.  Focus on the fruit and you’ll not be doing your job which means you’ll be missing out on better weapons and power ups that you’ll need when the fruit starts ganging up on you.  Unfortunately, you can only focus on the foreground where your till is or the far reaches of the store where the fruit emerge.  You won’t be able to focus on both.

That balance is the key to why the game is so much fun.  I found myself frantically scanning items or packing catering trays in order to earn a shotgun or assault rifle and committing to it while sometimes forgetting to look up and murder an apple or whatever.  And the more frantic the action, the better the game is.  Even if the gameplay can be pretty difficult at times, which itself is a good thing because you don’t want these games to be too trivial. 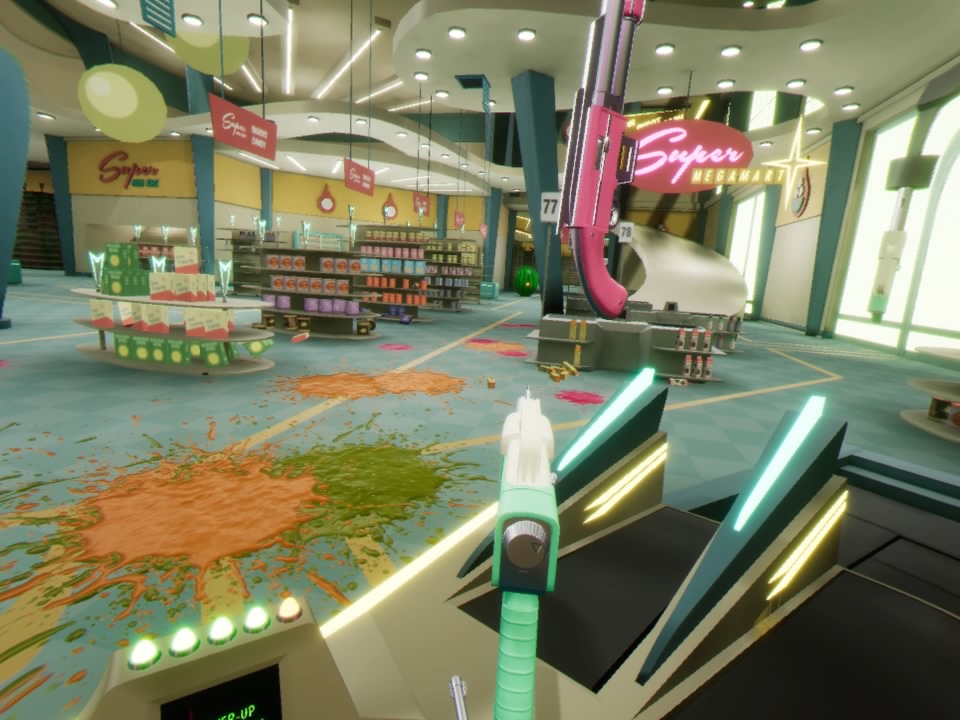 While there are only 24 stages, beating them will take a bit of doing and each stage has three medals to earn, giving you a reason to replay them.  You also earn new weapons that are worth checking out and adding to your load out.  That said, there’s not much else to the game but in a VR helmet you don’t need hundreds of hours of gameplay and Shooty Fruity certainly suits that pick up and play style of gameplay and also works excellently as a party game given how daft and crazy it is.

In terms of controls, the game has you using Move controllers with the trigger buttons being used to grab objects such as the groceries you are working with or the guns that cycle into your play area.  And of course the triggers are used to fire weapons.  Either hand can be used for working or shooting, and you can double up on whichever task you want also.  That flexibility is welcome and in our experience, the controls held up well even well the action was at its most hectic.  Aiming seems pretty much on point, although I may be doing myself a disservice there.  I often struggled to make those long shots at times, but my gut feeling tells me that’s all on me. 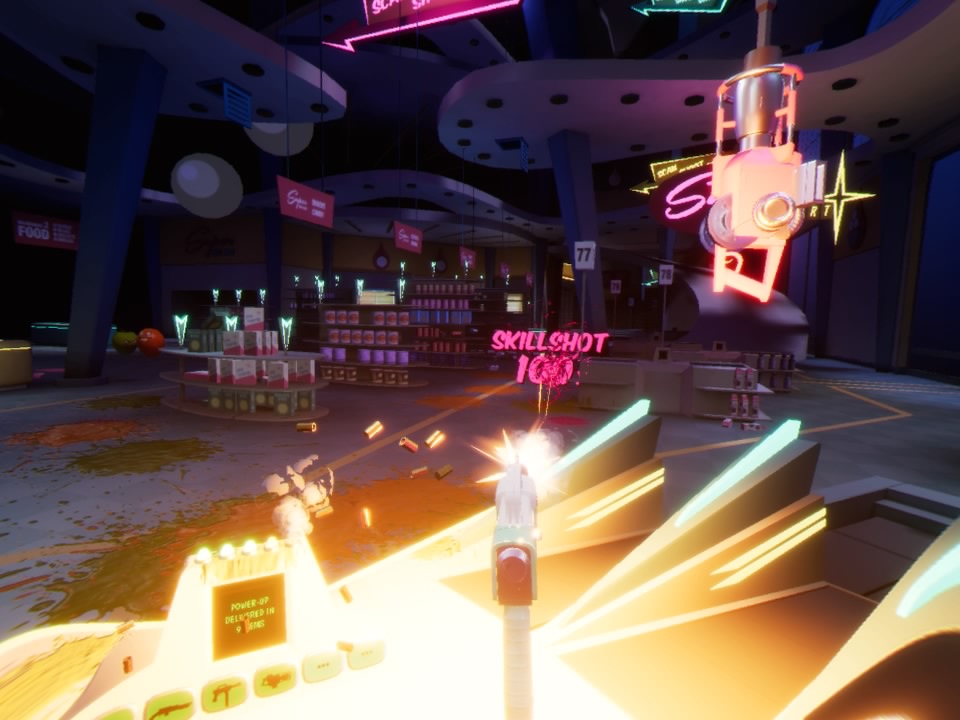 Visually the game is nothing special though.  The graphics are bold and colourful but lacking in detail, with a cartoonish look that suits the silly nature of the game but doesn’t create a convincing environment to play in.  The VR effect isn’t particularly special either but the perspective offered is perfectly suited to the gameplay, offering you a wide view of the playing area while giving the fruit plenty of avenues to approach from.

Sound is a little better with your manager giving you orders and commenting on your performance over the store intercom.  It evokes memories of Headmaster and we appreciated that they had proper voice acting for this.  Other sound effects are fairly rudimentary though but that’s okay.

So, overall Shooty Fruity does well to deliver on it’s odd premise.  It’s not the first shooting gallery game on PSVR but it might be the most fun and that counts for a lot.  We certainly enjoyed other ones such as The London Heist, Bandit Six and Scary Bears but this was definitely the most fun, even if it’s not the most technically accomplished.  That said, this won’t convert you to the genre if you’re not a fan.  But we are and this is good.

Shooty Fruity
7 Overall
Pros
+ A great mix of mundane tasks and shooting
+ Genuinely fun
+ Good level of challenge
+ New weapons keep things interesting
Cons
- Visually pretty ordinary
- Only 24 levels
Summary
It's not big and it's not clever but if VR is going to be mainly used for this type of shooting gallery game, we're glad to see it being used for games like Shooty Fruity that put the fun first and have one or two good ideas that we've not seen before.