Energy Invasion is a curious combination of two distinct arcade genres that previously haven’t shared gameplay space before and it comes to us by way of Evgeniy ‘Pinkerator’ Kolpakov, the Moscow-based developer who also brought us Energy Cycle and Energy Balance.

On the face of it, the game looks like a Breakout clone (I prefer the term Arkanoid clone myself).  You’ve got lines of bricks above you and you’re bouncing a ball around using a paddle at the bottom of the screen and if that ball gets past you, you’ll lose a life.  So far, so expected.  But this game is different.  Firstly, the ball doesn’t actually break any bricks.   Instead it just bounces around but if you flick your right analog stick, you’ll shoot smaller balls and these will destroy bricks. 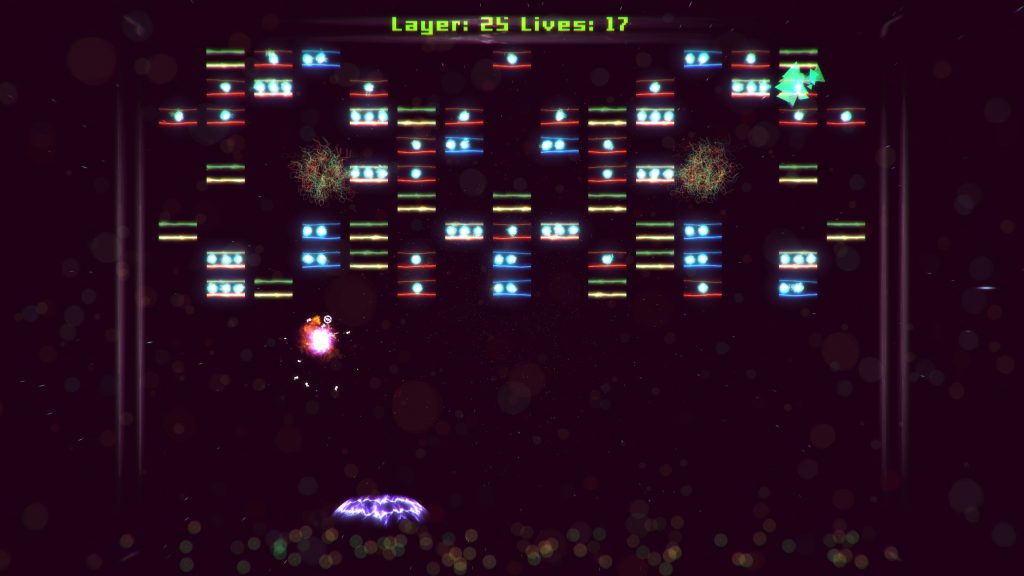 Interestingly, these balls are fired from the ball, not your paddle.  It’s an odd sensation because you normally expect to shoot from a ship that you are controlling but the concept works well in practise.  And so, this is how the rest of the game goes with you taking out screen after screen of bricks.

Aside from that, there isn’t much else to the game.  Power ups (such as having your paddle extend or place a barrier over the bottom of the screen) are unlocked as you go along but I’m still not sure exactly what triggers them.  There aren’t any obvious power up icons, it just happens.  But that’s not a massive problem.

The game offers three modes.  The first is Invasion.  In this mode, enemy forces spit red balls back at you that will cost you a life if they hit your paddle (much like the power ups, you earn new lives but are never really sure why).  On normal difficulty this mode presents a very significant challenge and given the almost random nature of how balls bounce around, it’s pretty common for you to be in a situation where you can’t save your ball without being hit by a red one.  Switching the game to easy difficulty (which is possible at any time in the game) removes this threat and makes the mode fairly straightforward to get through, especially as it only has 25 stages. 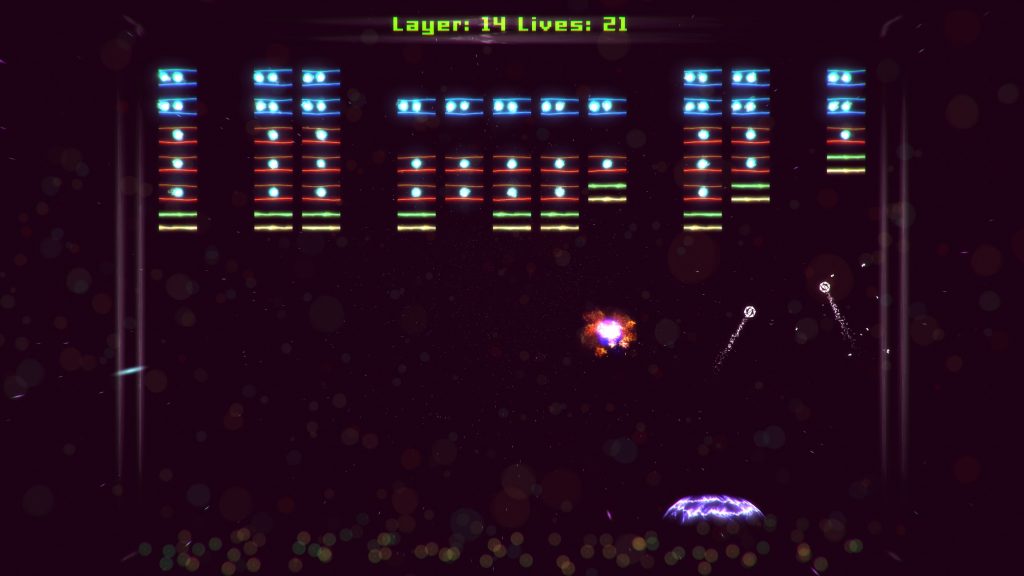 The next mode, Linear, is arguably more interesting.  Here the bricks slowly move down the screen, ending the game if they hit the bottom.  The way forward here is to clear the lowest bricks on the screen first or else it’s game over no matter how many lives you have banked.  Now I didn’t really understand this as the game doesn’t tell you the rules and I never hit a game over until level 18 (again, of 25).   However, after that point the game got much more challenging and the last five or so were a bit of a nightmare, which made them the most interesting part of the game and definitely the most fun.

Finally, Endless mode has you playing an unlimited number of levels in a mode similar to Invasion.  The trophies for this mode top out at level 30 so everything after that is just for leaderboard bragging rights. 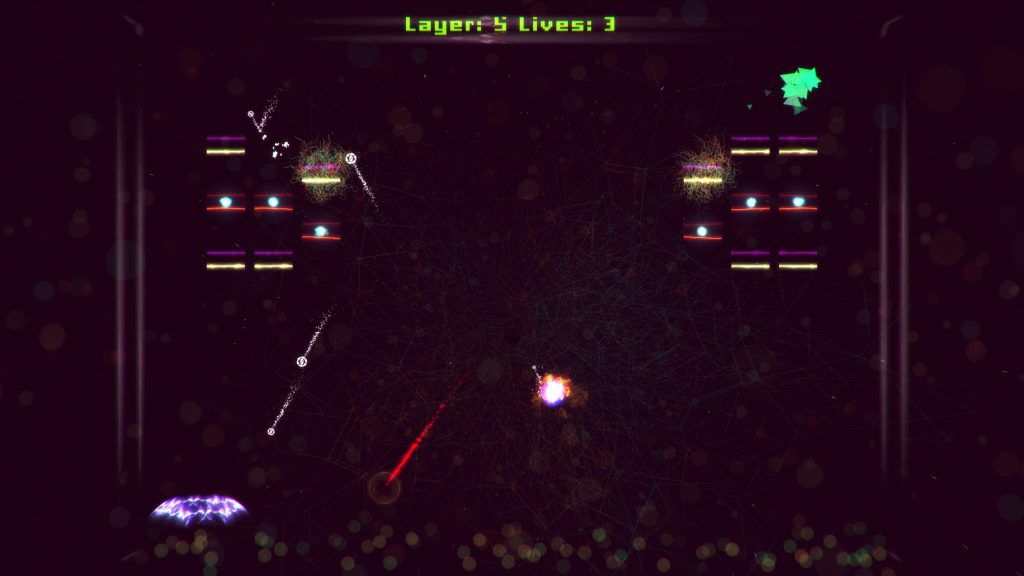 The game offers unlimited continues at a cost to your score, however that seems a very low price to pay because you’re never really aware of your score (as it’s not displayed during gameplay).  As a consequence, you’ll get through the game’s trophy set (which includes a platinum) in just a few hours if you’re into that sort of thing.

Energy Invasion definitely has a good idea and is pretty playable but it does have some issues.  There is a real lack of variation to the game.  The level layouts have no real character and the visual style never changes between levels or even the modes.  It’s certainly a nice mix of Rez-like backdrop animations and retro CRT-screen styled bricks but it would have been nice to see the graphics do interesting things because they really are overshadowed by the game’s spectacular soundtrack which offers some fantastic glitchy electronic tracks that are some of the best in-game tunes I’ve heard in an arcade style game. 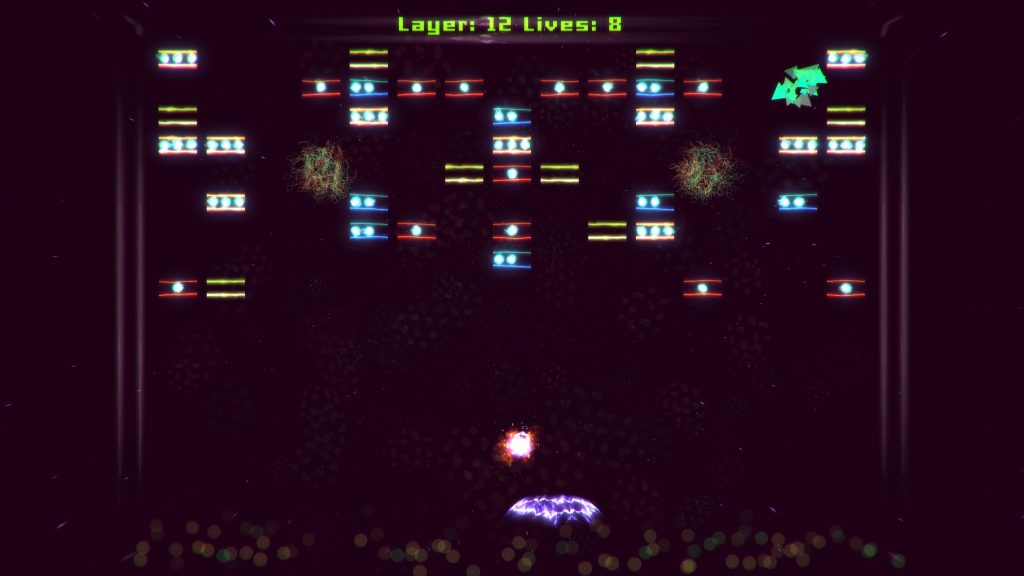 Also, the game’s physics-heavy gameplay has surprisingly unpredictable ball movement at times.  Sure, the smaller balls that you shoot collide and deflect as you’d the expect but the main energy ball that you are keeping in play often made completely unpredictable bounces, including going downwards off of my paddle.  Not that it really matters as the game is so generous with extra livesthat it never really mattered.

There is definitely something about Energy Invasion that we’d like to see expanded into a more well-rounded title though.  If they could mix up the visuals a bit, give the levels more character and figure out a balance between the game’s two very disparate difficulty settings, we’d be happy to see a sequel but right now this feels like an good idea and a great soundtrack looking for a more substantial game.

Summary
Energy Invasion does a good job of bringing together two distinct genres into a cohesive game engine but doesn't do enough to keep it interesting beyond the first few screens. After that the game's samey level design and visuals make you feel like you saw everything the game had to offer in the first few minutes but there is definitely the potential here for a more compelling experience if a sequel ever comes.