Serious Sam 4 is a first-person shooter developed by Croatian coders Croteam who are best known for, well, all the other Serious Sam games.  This series started way back in 2001 and has included three other main games and a heap of VR spin-offs.

The original Serious Sam was something of a revelation.  While it was just a fairly straightforward FPS, it did two things that made it stand out.   The first thing was Sam himself who was your standard wise-cracking bad-ass in the Duke Nukem style but the main thing was how the game built up in intensity, starting off feeling like a fairly straightforward Doom clone but ending up as just an absolute spectacle of total madness.  We’ve not kept up with the Serious Sam games but that first one lives long in the memory. 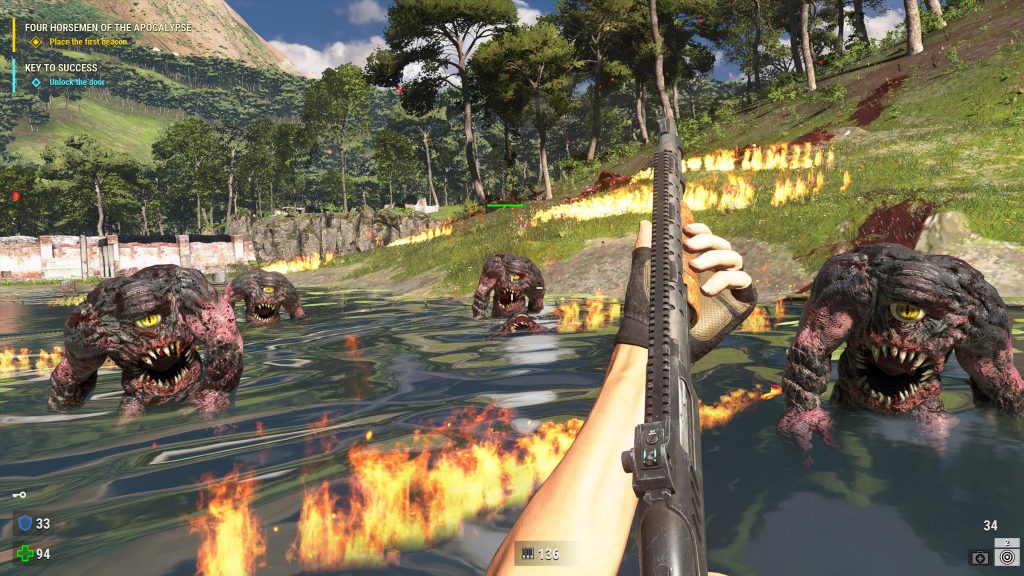 You play as Serious Sam Stone who leads a unit in the Earth Defense Force who are protecting the planet from forces led by Mental, an extraterrestrial overlord who wants to destroy humanity.  There’s not much point trying to explain the plot beyond that but it is worth noting that this is a prequel to the third game and the second game was a prequel to the first, so god knows how this all falls into place.

In Serious Sam 4 you start off in Rome where you are trying to find the Ark of the Covenant which turns out to be a powerful alien artifact that might be able to stop Mental and you’ve got a small squad of soldiers with you.  It all goes to hell pretty quickly though and so its up to you to get through the game’s fifteen chapters and hunt down Mental (well, as much as you can, this is a prequel after all). 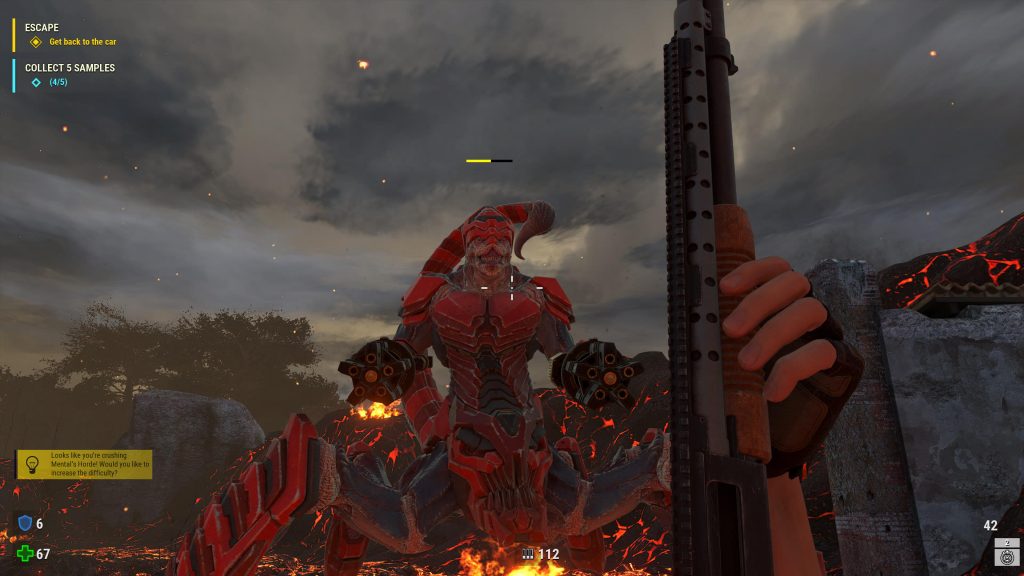 Your squad is really just there to give someone Sam to wisecrack at although they do occasionally get involved in combat but, for the most part, you’re really on your own.  Thankfully though, this is a Serious Sam game and so you’ve got the arsenal you need.

Sam gets pistols, shotguns, rifles, grenade launchers, rockets and more with which to take on the aliens as well as gadgets such as decoys, healing packs and time-dilation devices. 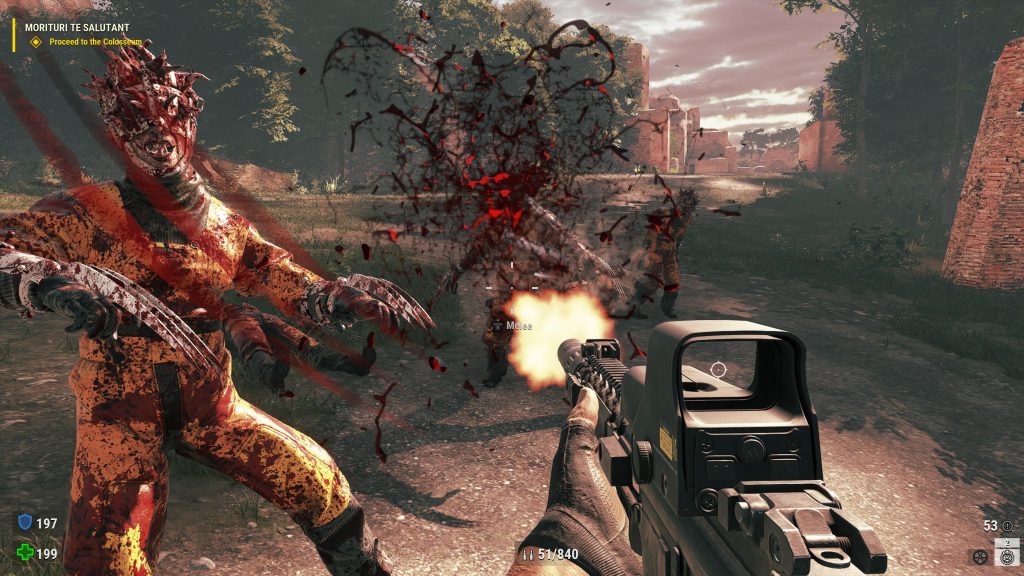 Having jumped from the first game to this one without really spending any time with the others, it is interesting to see where the series has gone.  The first game was set in rather plain arenas that were just absolute filled with just a stupid amount of enemies.  In this game though, you get more of a linear FPS type of level design with specific paths and alleys to go through that link up larger areas.  This makes the game feel much more traditional as a campaign-based FPS.

The great thing about the series is how you’ll face off against a bunch of regular enemies and then a boss character will show up but then later in the game those bosses will turn up in large numbers and there will be a bigger boss awaiting you, and so on and so on until you’ve got all of them chasing after you, acting like regular enemies. 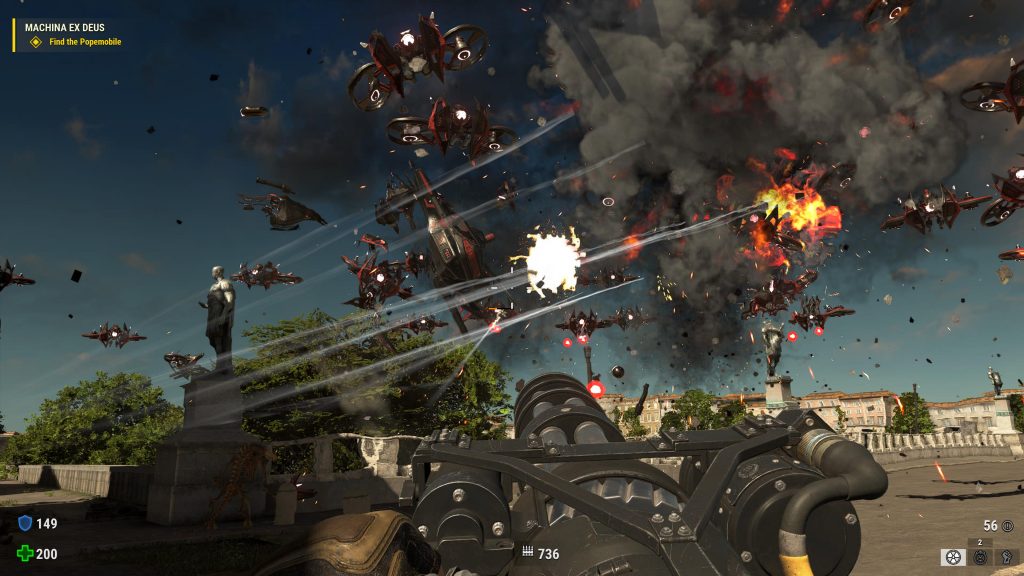 In the first game this was so effective.  We fondly remember being chased by giant minotaurs while a huge spaceship flew overhead.  In this game, it’s not quite as impressive but the action is fairly non-stop and intense.

This isn’t a game that’s all that concerned with emotive storytelling and is instead more about carnage and on that level, Serious Sam 4 works really well.  There’s something just so satisfying about mowing down a horde of enemies with a minigun or doing the traditional running backwards maneuver while shooting out rockets. 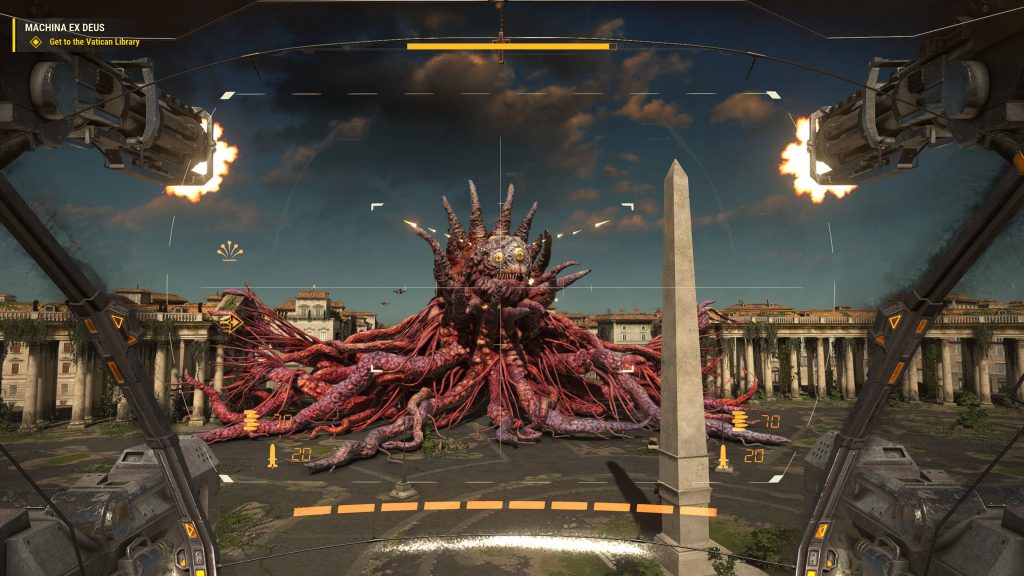 There’s not much here that will win any awards for originality but the game does have some nice set-pieces that really make for some interesting changes of pace, such as a decent mech section.  The game needs it though because with fifteen levels, all clocking in at around twenty minutes, you can definitely have too much of a good thing, especially when that good thing is fairly basic shooting action with AI that is basically no more sophisticated than ‘move from here to where Sam is.’

Serious Sam 4 does a simple thing but does it quite well and so in terms of the gameplay we can’t complain too much and as long as it’s fun, which it is, then that’s all good.  Our issues with the game are more technical in nature.  Given that it’s a PS5-only effort, we really don’t expect to be sat in lengthy loading screens.  There’s just no excuse for it.  Also, the two graphics modes (performances vs. fidelity) both struggle with frame rates a little and both suffer from severe texture pop-in. 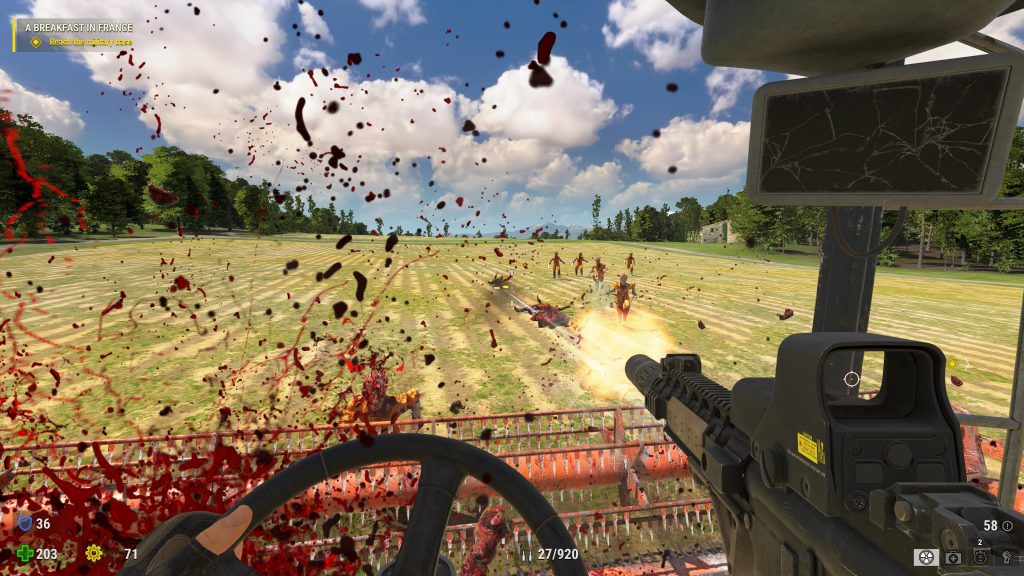 Indeed visually the game is quite basic with the environments being fairly simple, although they can be quite pretty.  This is a simple, linear game so it’s not trying to create the sort of open-world realism of, say, the Far Cry games.  But it’s not nearly as good looking as Doom Eternal, which has fairly similar level design and gameplay.  We also had some serious annoyances from the game’s clumsy menu system and the terrible weapon wheel selector.

In a few patches time, the game could definitely be a bit better but for now it’s a enjoyable, brutal shoot ’em up that won’t change the world but it will keep you interested for ten or so hours.  It’s arguably a little too long but there’s quite a bit of fun to be had here.

Serious Sam 4
6 Overall
Pros
+ Lots of enemies to shoot
+ Good range of difficulty levels
+ The humour mostly works
+ Nicely linear
Cons
- Levels drag on a bit
- Weak performance on PS5
- Poor UI
- Music can get annoying
Summary
Serious Sam 4 is exactly what you'd expect from a Serious Sam game but not what we've come to expect from a PS5 game. It's a simple but action-packed FPS that is full of enemies and carnage but it hasn't been ported across very well.