If nothing else, visual novels are a way for me to get out of my comfort zone and see into other people’s lives. It’s a genre very much not for me but, over the years, it’s given me plenty to think about. A Year of Springs, developed by npckc is a series of shorter novels packaged as a compendium. Centring around a young transwoman, the tales explore friendship in a fairly believable, if mundane manner. 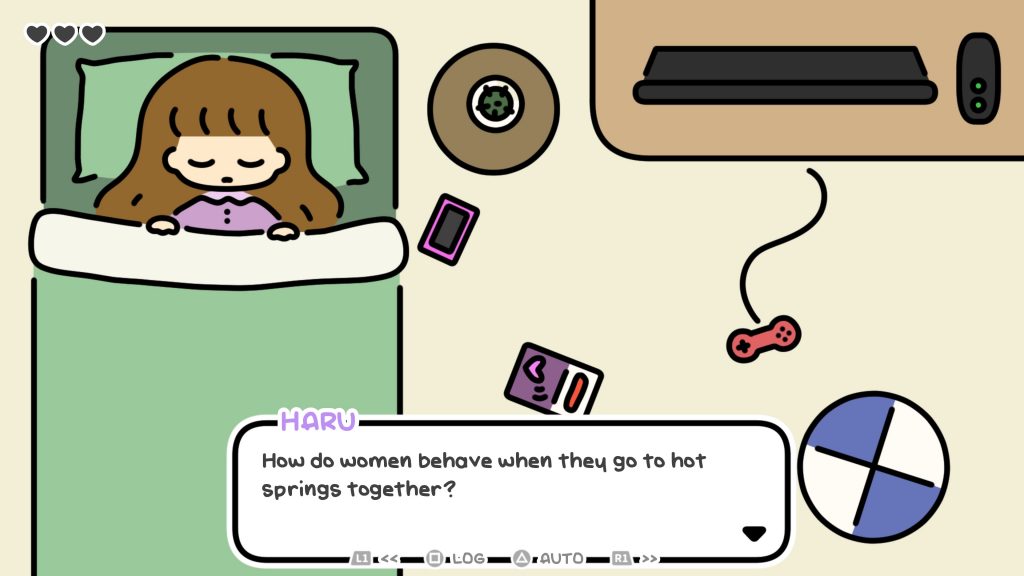 Our main character, Haru is a transgender woman ending her teenage years. She has a couple of strong friends in Erika and Minami who are very supportive. The first story tasks these friends with celebrating Haru’s birthday. Erika is tasked with trying to arrange a spa day for the girls and the tale deals with the obvious societal obstacles in her path.

Some of the legal avenues are covered with how Japan deals with same-sex relationships and transgender people and, for a bland bloke like me, it’s educational to hear about Japan’s legal stance. It’s not all roadblocks from the man that A Year of Springs centres around. Indeed, the biggest focus appears to be the more internal doubts that manifest within Haru.

You get plenty of dialogue options that allow you to chicken out or call events off entirely and it really helps portray how people very often have to deal with their own lack of self confidence before doing what could be considered a relatively everyday thing. As a result, arranging the day’s events can be a battle as, at every step of the way, there are inconveniences large and small.  It touches on things like trying to pass for the right sex and doesn’t really shy away from the conversations all trans people probably has with themselves. 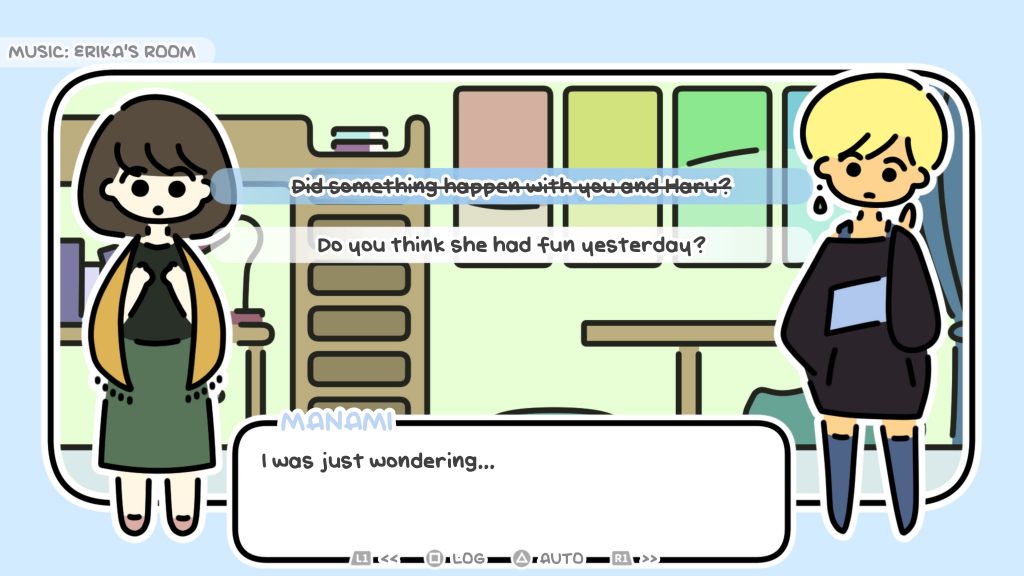 I find it surprisingly relatable and the mundane nature of it all does help keep things realistic. Along the way, there are surprises. As mentioned, Erika and Minami are incredibly supportive and their enthusiasm does help drive the story. The three girls feel inseparable through the many tales and it really makes them feel genuine. At times, Haru can feel a bit like a liability but she does eventually grow in confidence and new relationships come to fruition.

There’s also the kindness of strangers which does show that she’s not entirely alone or alien to the outside world. At times, Haru can be sulky and I do enjoy how crossed out dialogue choices can still be picked. It’s a nice way of portraying hesitation and doubt and makes the conversations feel a lot more human. These manifest with all three of the cast and it does show the compromises and problems that all friendships face. It’s well done and you don’t tend to often see that in visual novels. 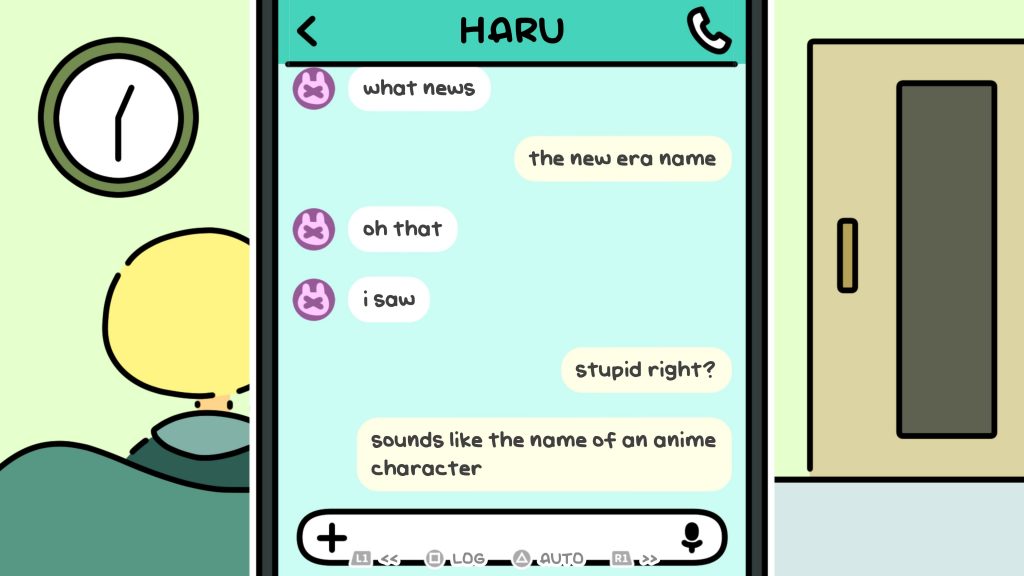 Each of the stories focus on each of the friends. Haru does seem to be the connective tissue between them but Erika and Minami all have a focus which helps flesh out their characters. Their relationships do grow and they discover things about each other as each chapter passes. Some of the revelations do feel a little forced but, on the whole, the shark is not being jumped. It stays true to the themes of acceptance and love which is admirable.

One thing that irks me is how most of the endings feel like failure states. Some can come quickly if you brush off your friends at the first opportunity. Each story is small enough to be tackled in one chunk but you can save and revisit decision points. I guess this is more a personal preference but this approach leaves you with a lot of incomplete stories and often they’ll have trophies attached to them. It’s a small complaint and not one that’s unique to this game. I just wish the diverging paths felt more comprehensive.  Each story is locked away behind successfully completing the previous one.  Whilst it’s seen as a compendium of three separate stories, this ensures they’re treated as part of a longer narrative.

Presentation is kept fairly minimal. The art does carry a cute, simple aesthetic that’s pleasant enough to look at. There’s not a lot of animation to deal with but it still holds my attention. It’s at it’s most engaging when the friends hold conversations by phone or text message. There’s plenty of colour to it, if lacking in some detail and intricacy. 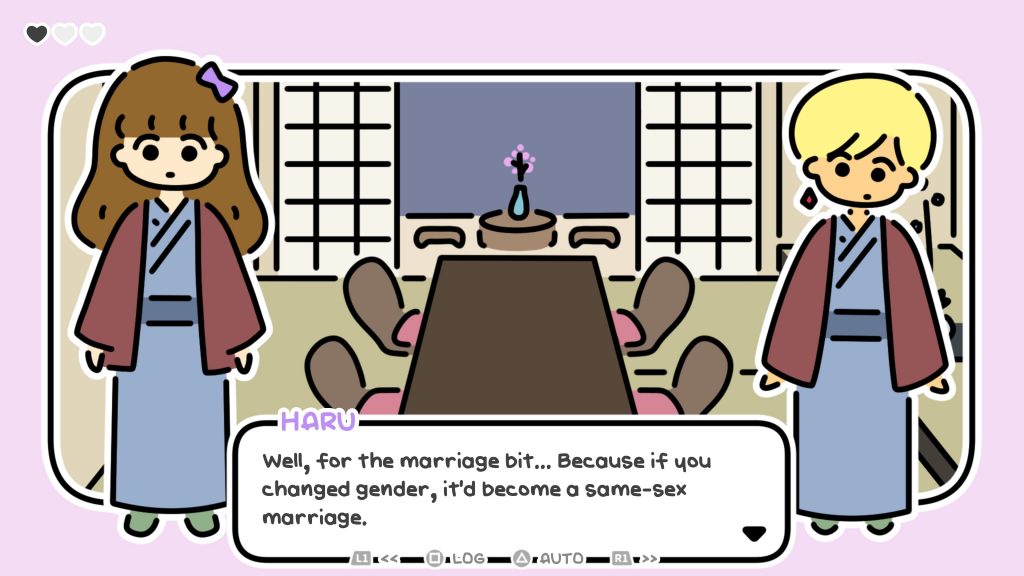 Musically, it’s a largely piano score that keeps things light. I don’t find it especially memorable but you can listen to it separately in the menus. I don’t have much to say about it but it does accompany the visuals well. There’s not much drama to it which fits with how everyday the conversations tend to feel.

For a genre that’s occasionally childish and fantastical, it’s nice to play a visual novel that tries to keep itself grounded and focuses on more realistic, human problems. I do often wonder how games can tackle more heavier, personal subjects but A Year of Springs manages to handle things deftly. The friendships are portrayed appropriately and I really like how a person’s doubts can manifest as crossed out dialogue responses. It’s not perfect but it’s certainly a game that’s won me over.

A Year of Springs
7 Overall
Pros
+ A very difficult subject handled with some tactful writing.
+ Fairly light in tone and execution.
+ Good characters that really feel like a tight group of friends.
+ Colourful visuals and presentation.
Cons
- Each story is locked away behind endings.
- Some moments feel a little forced.
- A very specific narrative that won't be for everyone.
Summary
A Year of Springs is a collection of surprisingly well-written visual novels that handle a very personal subject in a provocative way. The tales of friendships, doubts and acceptance are nice to see play out. At times, it's mundane and everyday and the conflicts are small but being able to show those internal conflicts are very effective. It ends up feeling surprisingly wholesome and enjoyable.