I never played any of the previous Scribblenauts games on DS or otherwise, so this was my first foray into this amusing world. In a departure from previous titles, the developer has opted to go with a party based approach for Scribblenauts: Showdown.

This naturally lends itself to playing with actual human beings rather than against AI opponents but, thankfully, you can tweak the difficulty of the AI ranging from pushover to Skynet levels of hatefulness; this really helps in terms of being able to see all the game has to offer. 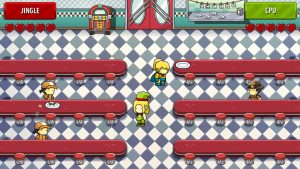 There are three main game modes that make up Showdown: Versus, the titular Showdown and Sandbox, each of which have their own strengths and weaknesses.  You’ll unlock various items by spending the in game currency ‘Starites’ and, thankfully, the game showers you with them throughout so you won’t have much issue unlocking everything.

Minigames make up most of your Versus and Showdown experience, the latter being slightly embellished by a Mario Party-style board game. This only really comes into its own when played with multiple players, though as a format it is familiar ground.

The bulk of the minigames ape classic videogames starting way back with the likes of Pong andBeer Tapper through to birds of both the Angry and Flappy variety. There are also riffs on the likes of Dance Dance Revolution andFrogger among many others. 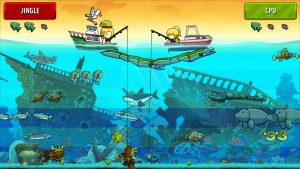 Minigames come in two distinct flavours.  The first where you need to choose an object that best suits the task or theme to hand. The better the game deems your suggestion to fit the category, the higher your score by fulfilling the criteria will be. For example, when the game chose A as the starting letter for heavy objects the CPU chose ‘anaconda’ and I went with Andromeda. Oddly enough the galaxy got me maximum score bonus (and a nice trophy into the bargain) by virtue of being a bit heavier than a snake.

The second minigame type is simply action based, for example there’s one game where you have to dig by waving your controller up and down like you were playing on a bloody Wii. These are generally less satisfying to play than the word themed rounds but mercifully over pretty quickly.

The closest you’ll get to a quest mode is in Sandbox mode, each of the eight themed levels having ten distinct tasks you’ll have to fulfil to unlock all the bonus Starites for the level in question. You might happen across a fish with a water voice bubble showing, that’d be as simple as conjuring up ‘water’ using the helpful dialogue entry system. 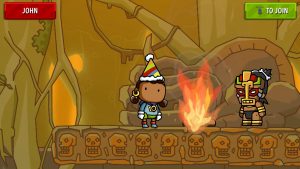 This mode and all the others can be played with multiple players mean you’ll get a great deal of fun from the title.

There’s an extensive character creator that younger players are sure to enjoy, you’ll need to use it for a trophy too. It gives a real sense of player agency seeing your Scribblenaut run around in the various game modes.  Regarding trophies, you’ll be showered with them as you amuse yourself but some of them aren’t much fun to go for, particularly one tied to a perfect Flappy Bird run. Grrrreat. 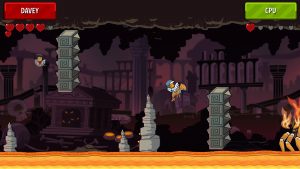 This game is great fun and sure to amuse you and the younger members of your household, a perfect rainy day game in terms of the sheer scope of it. It could even be called educational in terms of how it makes learning fun.

Scribblenauts: Showdown
8 Overall
Pros
+Bright sharp graphical cartoon style
+Tight controls
+Good variety of minigames
+Sandbox mode is great fun
Cons
-Yet another version of Flappy Bird. Really?
-Showdown mode isn’t actually that great
-Maybe a little expensive at £34.99
Summary
Scribblenauts: Showdown is great fun and sure to amuse you and the younger members of your household. This is how you make learning fun. Recommended.