On the face of it, Way Of The Passive Fist is a short lived novelty that should outstay its welcome quicker than the smirk disappears from your face as you possibly laugh at the reference to the classic ’80s game Way Of The Exploding Fist.

Thankfully that turns out not to be the case but you’ll still find yourself thinking ‘is that it?’ from time to time.

Way Of The Passive Fist‘s gimmick is you don’t directly attack in classic fashion, you parry each attack from enemies, wearing down their stamina bars until you can shoulder barge them to death. Each enemy type has a distinct tell and audio cue that lets you know when they’re about to attack. 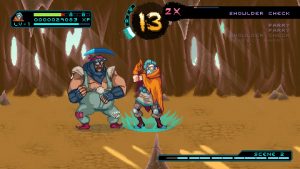 Timing your parry just as an enemy attacks is critical as you’ll take down their energy bar quicker with a perfect parry than if you time it a bit late or far too late. This distinction is key to doing better at higher difficulty levels as you won’t last long otherwise.

Stylistically, Way Of The Passive Fist harks back to the golden age (or axe if you will) of side-scrolling  brawlers, the enemies aping foes from such luminaries as Final Fight and Streets of Rage. To start with they range from guys that simply punch and women that throw knives and bombs to brawlers that can grapple you and take a huge chunk of your health bar off in one hit.

The bright distinctive graphical style depicts  the remote planet your character is traversing  well, evoking the classic era of this genre well. The music is also particularly well done and wouldn’t feel out of place in a game of the time. 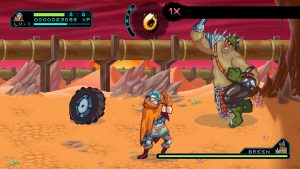 The further you progress, the more different enemy tropes you’ll encounter, the downside is that often they’re just reskinned existing enemies that have different timing or just hit that bit harder. It’s up to you whether you have the patience to learn these patterns and plough through, though this reviewer might have struggled a bit more due to having had a couple of beers.

You’ll encounter different environmental hazards throughout the levels, artillery strikes and landmines to name but two. In the case of the artillery strikes you’ll have a few seconds before the bombardment strikes, so an effective strategy is to draw enemies into the target zones so they get killed rather than you. 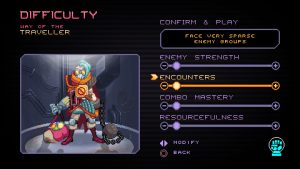 On the default difficulty level, Way Of The Passive Fist is no pushover. The difficulty is such that you’d do well to drop all the sliders down to their lowest level just to stand a chance to begin with, even if just to see what the game has to offer and stand a chance at setting reasonable scores on early levels. The challenge you’ll face is still a stiff one though and I still struggled at some points. The game does lightly mock you for pussying out if you do drop the difficulty and there’s also a trophy for completing the game at the highest difficulty.

These little touches are endearing enough and add to the feeling that this is a labour of love by the developers. However I couldn’t shake the feeling that the the game is still a bit one note. It smacks of a game jam concept that hasn’t really been fleshed out sufficiently.

For a niche retro game, you could argue the price is maybe a little high but the challenge contained therein is enough that you won’t come away feeling ripped off.

In conclusion, you get a fun tribute to classic side scrolling brawlers of yore with some amusingly named trophies and a stiff challenge.

Way of the Passive Fist
6 Overall
Pros
+Easy enough to play but tough to master
+Amusing spin on brawler mechanics
+Well done parodies of genre staples
+Nice retro stylings and music
Cons
-Steep learning curve
-Essentially a one trick pony
-Can be very difficult at times, even on lowest difficulty
Summary
Way of the Passive Fist is a knowing parody of classic side-scrolling brawlers but the joke wears a little thin after a while unfortunately and the game offers something of a stiff challenge that might deter all but the most masochistic gamers.