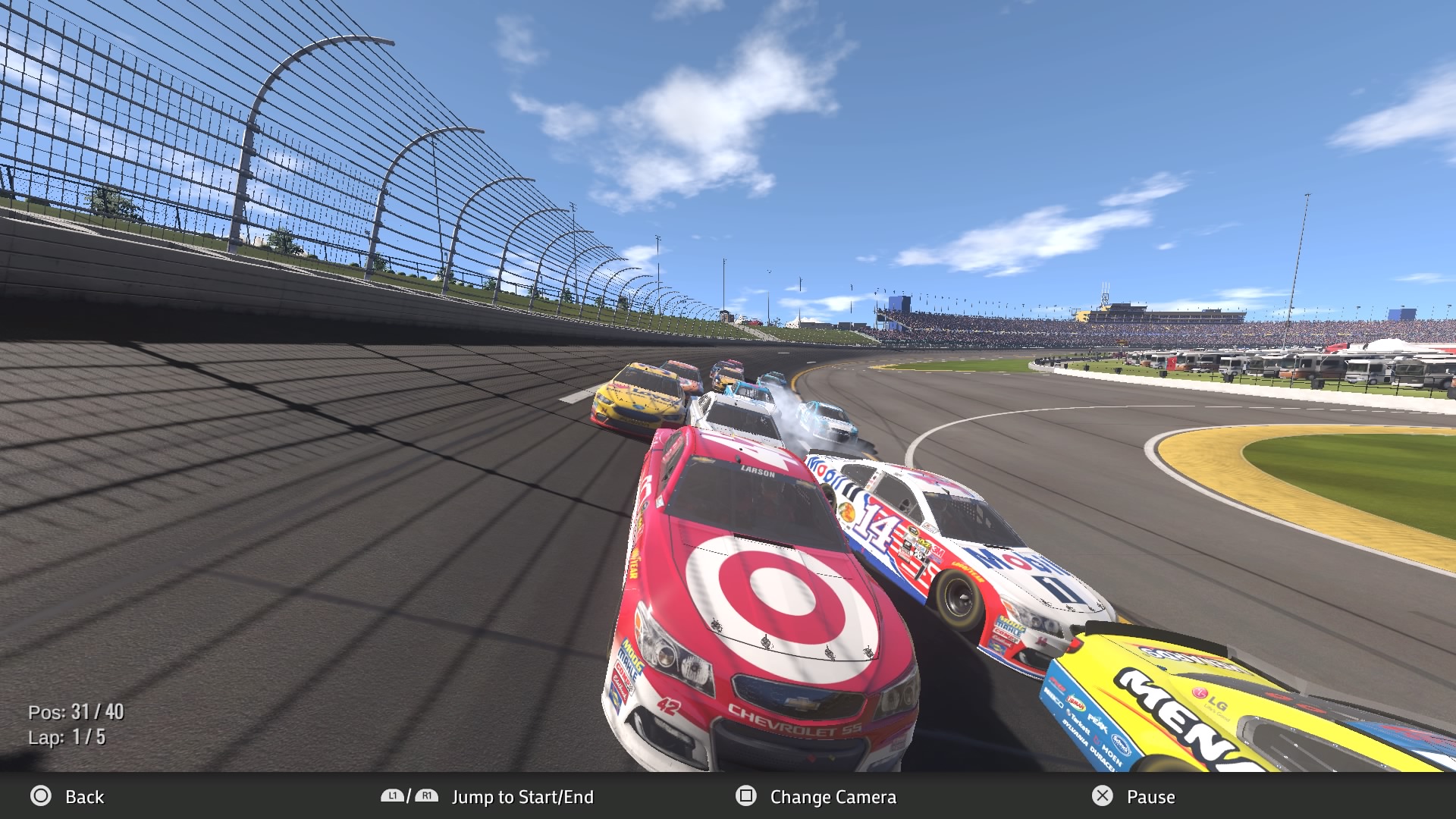 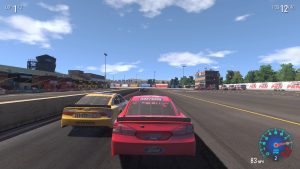 As motorsports go, NASCAR is probably my least-visited. As a spectator sport, it seems great but, as a participant, I can’t quite shake the monotonous nature of it. Here’s hoping NASCAR Heat Evolution changes my perspective.

It all looks nice. You can certainly feel they’re working within a budget but the cars and tracks are well recreated. Each has a great sense of place with the Las Vegas event placed within the shadow of the Nevada mountains whilst Charlotte and Texas battle it out for world’s biggest HDTV. Care has went into ensuring each locale has its own flavour. Sound noticeably lacks behind with engines short on punch and identity. Menu music is traditional guitar fare and audio options are a little slim. You’ll be hearing a lot of the engine topping out but, at least the racing is focusing your attention.

When the time comes to start your engine, NASCAR Heat Evolution delivers a competent driving model. On default settings, you’re allowed to bang, barge and bully your way through a packed 40-car field without penalty. By default, trigger and steering sensitivity feels spot on, although you can opt to alter and test these control settings if you’re after something a little looser or more precise. You can certainly push your luck which helps make this feel like an accessible ride. 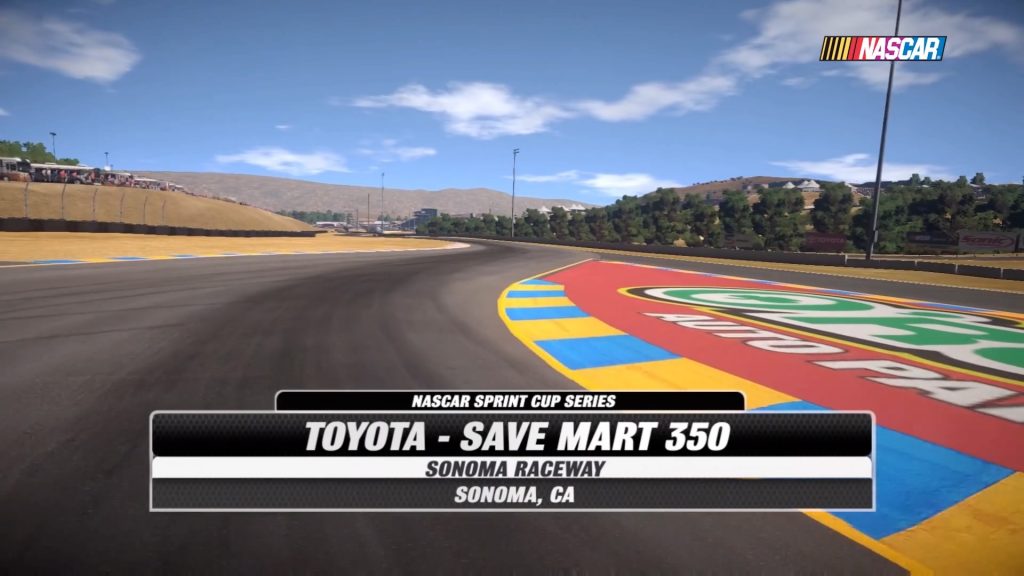 Tracking your position is made easy with a spotter piping up over your radio. He’s very useful at informing you of incoming threats or clear lanes. It’s something that adds to the game’s authenticity and the NASCAR license, predictably, gets put to good use. All the current tracks, drivers and teams are represented and there’s nice presentational touches used to book-end each contest. Rick Allen introduces each race impeccably with some nice commentary which gives each race a big-event feel. Every round concludes with some facts and figures about laps lead and who made the most progress through the field.

On the simulation end, the options aren’t really there. You can’t adjust heads-up display or anything remotely complicated. Damage can be switched between basic and advanced options. Digging deep will just result in the bottom being reached sooner. That said, the stripped back nature of this allows other aspects to shine. The racing feels tight and competitive. The AI is very aware of your existence and will scrap for whatever gap you leave. There’s a great push and pull to it and the races are shortened by default so there’s a real dash to the line in most races.

There’s no option to reset your car after a major shunt or rewind. It’s rare that it happens but ending up on your roof is curable only by a restart. Loading is quick enough to prevent too much waiting around and the shortness of the races won’t aggravate much frustration.

As modes go, you’re given plenty of single-player staples. Accompanying the championship and race modes come a comprehensive career ladder and a challenge mode which is looking to be added to over time. The career is probably where your time will mostly be spent and it provides probably the most fun I’ve had with the game. You begin with a store-bought Ford and a fledgling team with your aim to bolster your outfit and car whilst gaining the results and sponsors to keep funds rolling in. 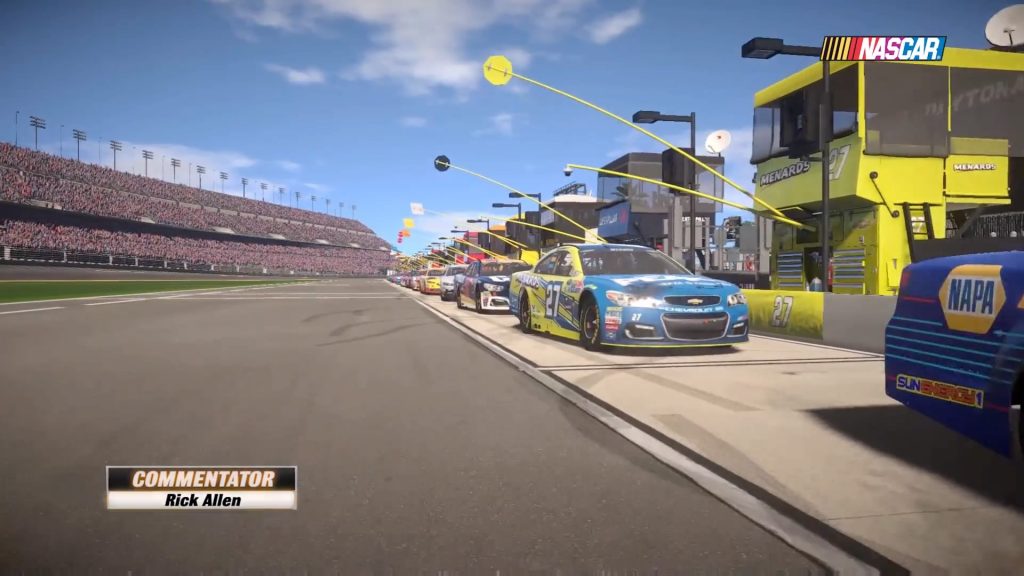 The team and facility-building is uncomplicated. The options at your disposal feel like a skill tree which you can charge through at your leisure. You could jump the gun and prioritise upgrades but I’ve been chalking them off one-by-one. The sense of progression has been noticeable. I’ve found myself moving from consistent top-35 finishes to now challenging the top-20. It’s a nice feeling to visibly see your machine get better with each upgrade.

Away from solitary competition, the multiplayer lobbies are barren at the moment. Given how I enjoy the driving on offer, it should provide a good run with friends. Challenge mode should hopefully fill your time til the community forms. As you’d expect, these challenges mimic real events, giving you the opportunity to re-enact or change history. It’s another feature for fans to get excited for whilst casual observers will be glad of the extra content, some of which is arriving for free. 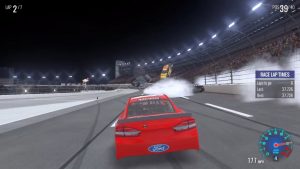 This has been a pleasant surprise. I’m not sure what I anticipated from a NASCAR title in 2016 but the license and sport has been done right. Those wanting a simulation might turn away from this but, as a casual romp through America’s raceways, it goes down a real treat.  Definitely worth seeking out if you’re after something simple and fun.

NASCAR Heat Evolution
7 Overall
Pros
+ Enjoyable, accessible racing engine. + Looks pretty good with the license being put to great use. + Plenty of single-player action to keep you occupied.
Cons
- Those wanting a simulation will be disappointed. - Options are a little lacking. - Sound feels dated. - Online lobbies are empty at launch.
Summary
NASCAR Fire Evolution winds up being a very enjoyable blitz through the often scoffed world of saloon car racing. Whilst it does keep things simple and rarely strays into a simulation, I'm kept engrossed with a solid driving engine and enough modes to keep casual and die-hard fans satisfied.