While you rarely see split-screen, competitive shoot ’em ups – indeed we can only recall SNK’s Twinkle Star Sprites as an example – there is something comforting and familiar about Rival Megagun, the latest release from Vancouver’s Spacewave Software.

Right from the off the game wears its retro influences on its sleeve from the pixelated, colourful cut-scenes to the enthusiast arcade-style music (which evokes that kind of arcade-at-home Dreamcast-style which we’re big fans of). The only thing stopping the game feeling like an authentic arcade port is the story which is presented via static pages and offers a fair bit more plot than you’d expect from a straight-forward vertically-scrolling shooter. 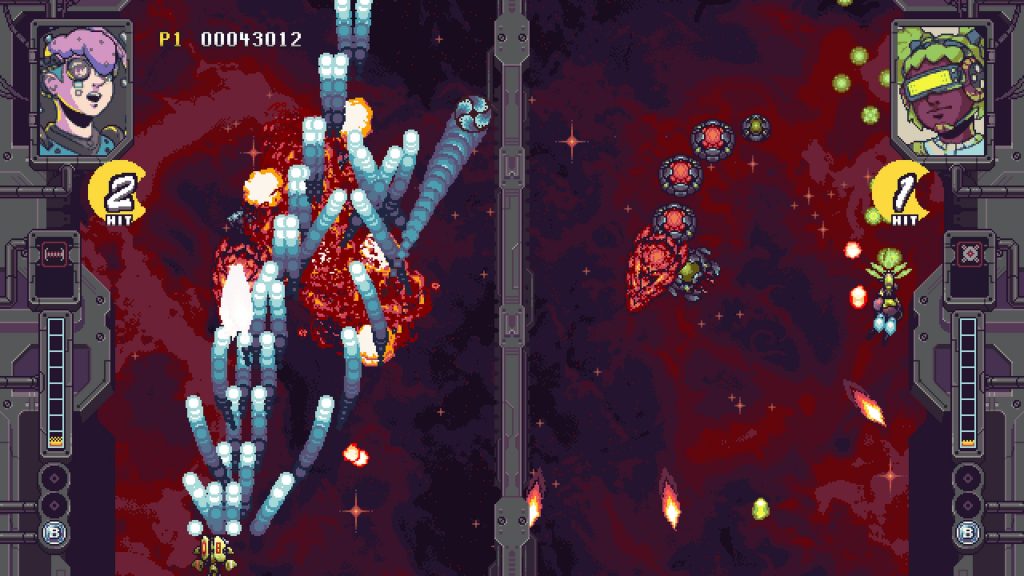 The story is that a race of powerful aliens known as Harvesters have arrived in Earth’s orbit and started chowing down on any satellites, space stations and debris they can and the only plan so far has been to ship our junk up to them to stop them coming down and eating people.  However, as the Earth struggles to keep up with their gluttonous demands, the powers that be have devised a competition.  The pilot who can get to, and destroy, the source of their power will win the biggest ever cash prize and the title of ‘The World’s Greatest Hero.’

So, six of the world’s best pilots set out to win the prize and you get to pick your choice of these anime archetypes (one of them is a green-haired inventor called Smith who happens to be nine years old and is blood type B+).  Each of these pilots’ ships has a different firing pattern and other weapons, so you’ll need to try them out to see which one you prefer.  So far, so ‘every other vertically-scrolling shooter.’ 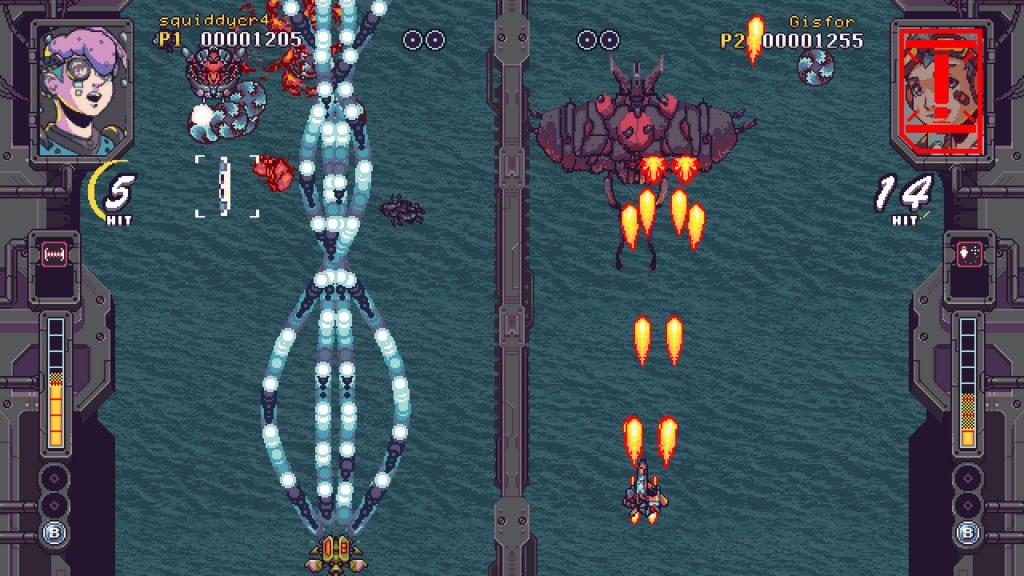 Except that Rival Megagun isn’t quite as straight-forward as you might first think. Sure, it looks and sounds authentically old school but the big draw here is that it’s not just you versus an angry alien army.  On the face of it it is but while you’ll be blasting your way through Harvester hoards, this time the main enemy is your opponent who is doing the exact same thing on the other half of the screen.

Eschewing the tutorial, fellow PSC-staffer Gareth and I went right into this online and were able to find our feet pretty quickly thanks to the game’s fairly accessible controls and premise. Essentially you’re doing the usual shoot ’em thing, dodging bullets and killing enemies. 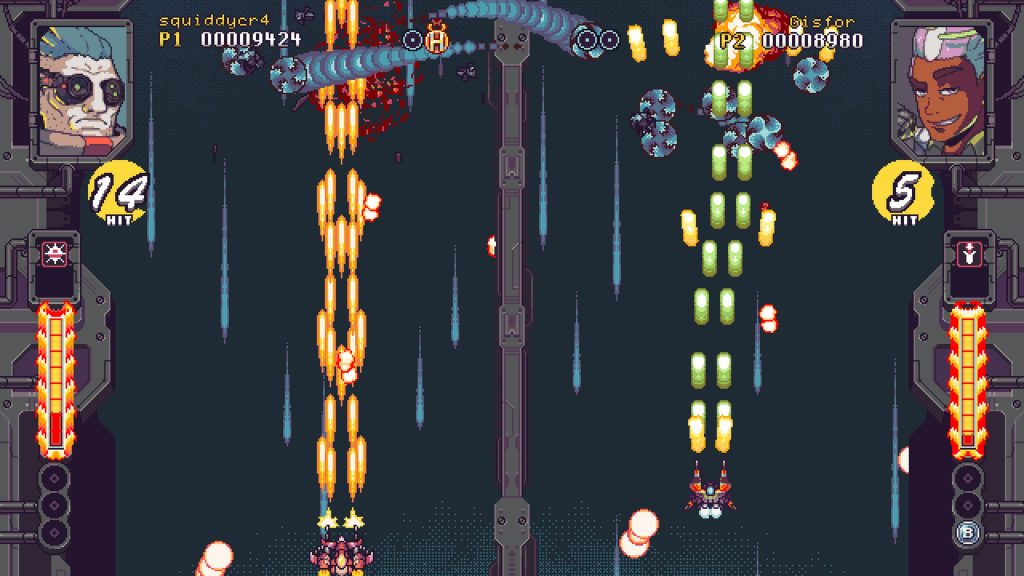 If you can keep your chain going by killing enemies quickly, you’ll leave portals on the other side of the screen. When your chain is broken they become enemies who will shoot at your opponent. This also lets you build up your attack meter, which allows you to directly attack your opponent by firing at them (your attack depends on the character you choose to play as).  These attacks are reasonably easy to dodge but when combined with those portals, it can all get pretty taxing.  Especially as dodging all the incoming firepower is made trickier by only giving you 50% of the screen to play with.

Filling up your meter entirely allows you to morph into a larger Rival Battleship which emerges onto your opponents field of play and essentially turns you into a boss character. Your four face buttons each give you a different attack and it’s up to you to pepper your opponent in the hope of them taking a bullet.

Two attacks are enough to kill your opponent (and to kill you) and so the game becomes about staying alive in true shoot ’em up style while managing your attacks. The occasional power-up will hove into view allowing your to replenish a bomb, repair your ship (removing one attack’s damage) or increase the time you get to keep a chain going. 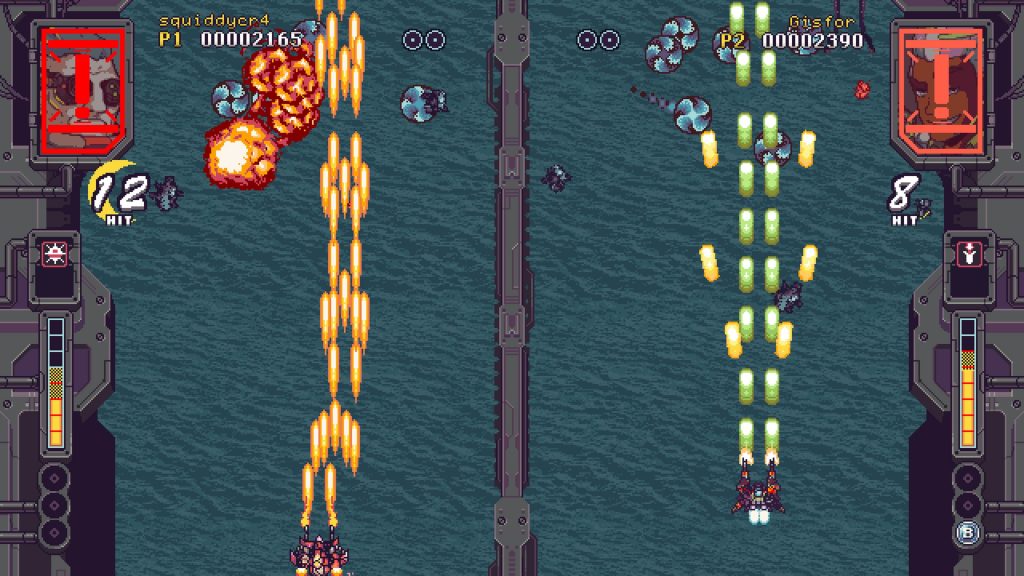 Before long both players are fighting for their lives with the game feeling almost like you are swimming upstream, just trying to get through all of the bullets, hoping that your skills hold out longer than your opponent and, to Rival Megagun‘s credit, this all feels great. The game feels like an instant party classic and will be great for local multiplayer but the game’s online code also seemed to hold up pretty well, although the direct boss attacks do seem to favour the host a little as Gareth was seeing a few bullets pass directly through me while I felt like I was in The Matrix, dodging everything.

A single-player campaign is also available with enough difficulty settings to cater all players and this is where you get the story and are able to unlock upgrades for each character such as power-up pulling magnets and weapon boosts.  The story changes for each character and, as silly as it is, it does add a little colour to the mode and makes it worth playing but ultimately the long-term value here is in playing online and that’s fine as the main story mode is over pretty quickly.

Rival Megagun may be yet another retro-flavoured indie-’em-up but it feels pretty authentic and has a great charm to it.  The visuals and music get the vibe right and the story stuff at least gives the impression that the devs cared when they were putting this all together.  There are some unlockables along the way too such as story cards and some power-up customisations for the playable characters. 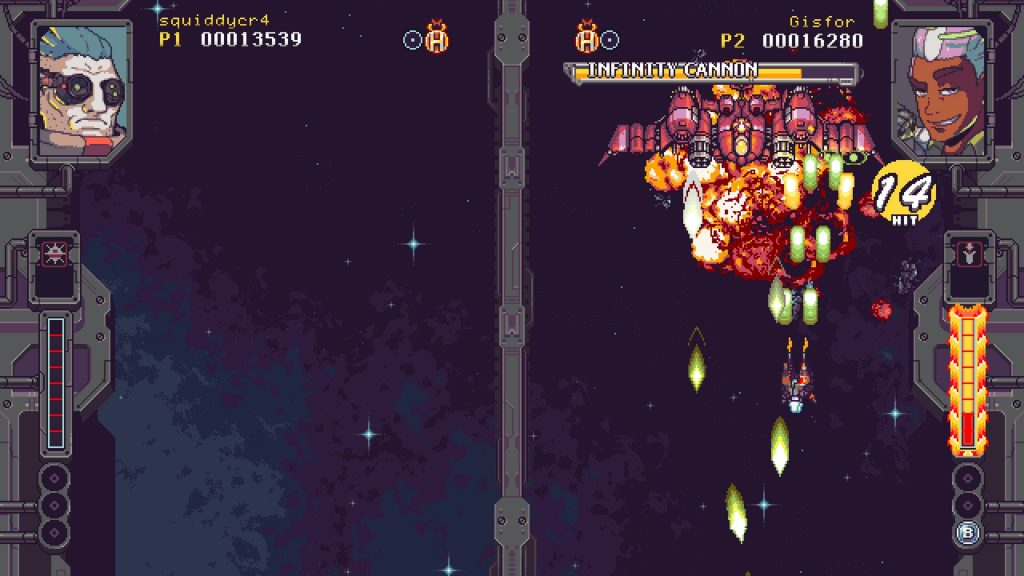 Your mileage may vary on this one but most likely you’ll either have a great short term experience playing this with friends or you’ll get deeply into the online play and will spend your hours meeting new and exciting people and killing them.  Either way this is an indie gem that’s well worth considering.

Rival Megagun
8 Overall
Pros
+ Gets the shooting right
+ Is a nice twist on the genre
+ Works well in single player, local co-op and online
+ Well-presented
Cons
- Short-lived single-player mode (but has some replayability value)
- Is yet another 16-bit looking game
Summary
Rival Megagun takes an age-old genre, adds a few twists and a bit of charm and ends up being a game that works well as an arcade-style shoot 'em up, a potentially popular online title and a potential party game favourite.