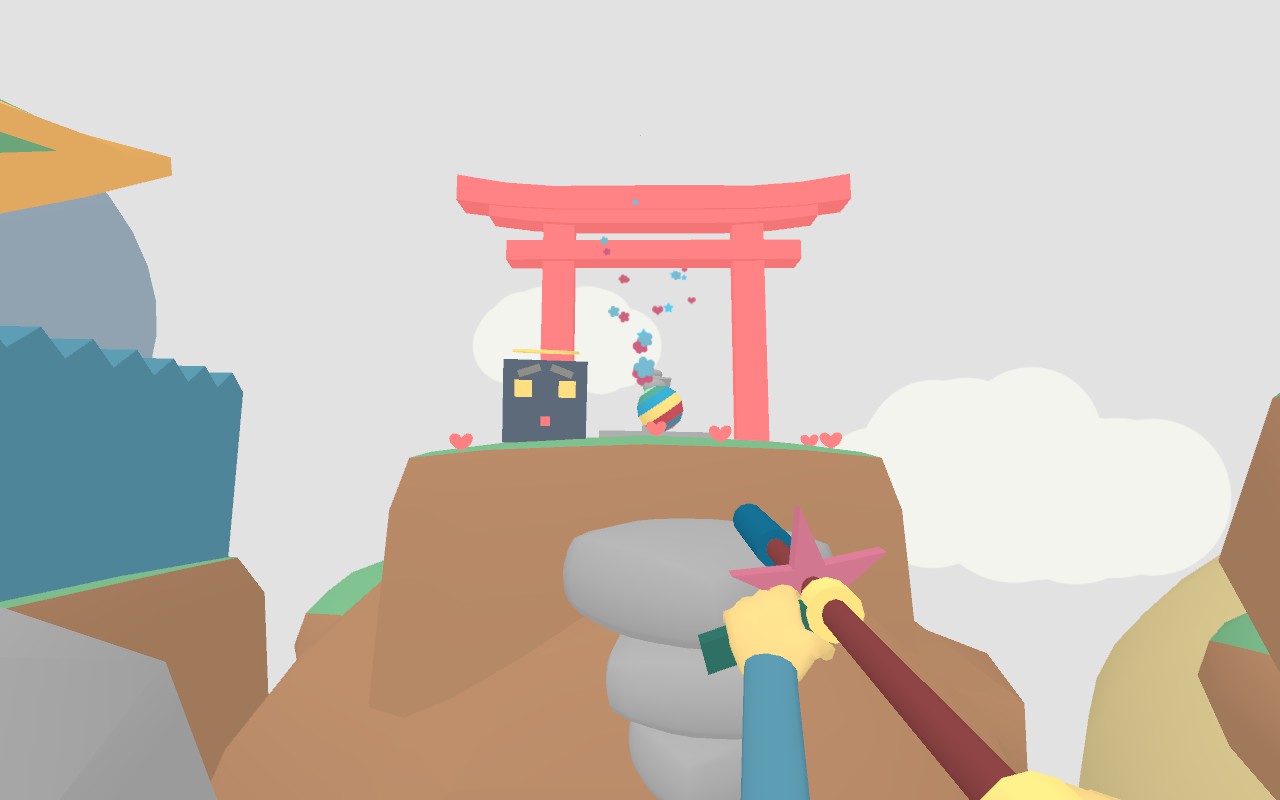 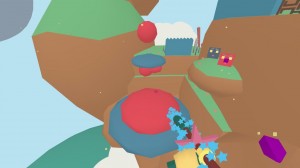 Speedrunning is a practise in gaming that has fascinated me ever since I saw Quake Done Quick. It intrigues me to see gamers taking their games further to create new categories of achievement to prove themselves the best at a particular game in their own way. The sheer dedication and memory that is required to pull of an impressive time in a speedrun is no small feat and with entire streaming events dedicated to speedrunning it was no surprise that developers would start to build concepts around it.

Lovely Planet takes the speedrunning concept and merges it into a happy go lucky first person shooter with a distinctive Katamari-esque aesthetic. Levels are built along basic paths in this colourful world with enemies and pitfalls dotted around to impede your progress. There is very little that is needed to understand in this game. You need only concern yourself with running, shooting enemies and jumping. 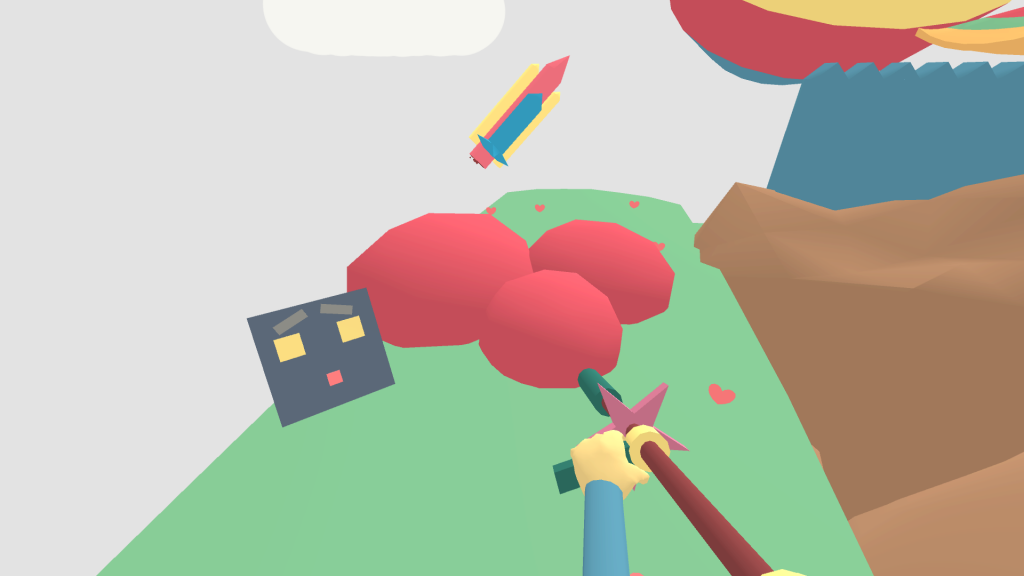 This may seem like it is setting a tone of having a lack of variation however this is not entirely the case. The sheer combination of elements can be one of the most intriguing challenges when you first set eyes on a level. The initial run through and devising a path through the obstacle course is akin to a high speed puzzle which can be genuinely fun to work out and overcome. Also when the perfect run comes together and you can perfectly weave through a level with balletic grace then the experience is amazing fun. However at times this can feel like trial and error, especially towards the latter stages when there is an obstacle at every other second of the run. Enemies, while not difficult to beat can be a stalwart issue when running through a level at full pelt. There were many times in my playthrough in which my progress was immediately halted due a unforeseen pink angry square that shot me as I landed or worse, when reaching the end checkpoint just to find out that an enemy was missed, as one of the conditions of success is to clear each stage completely of enemy life. 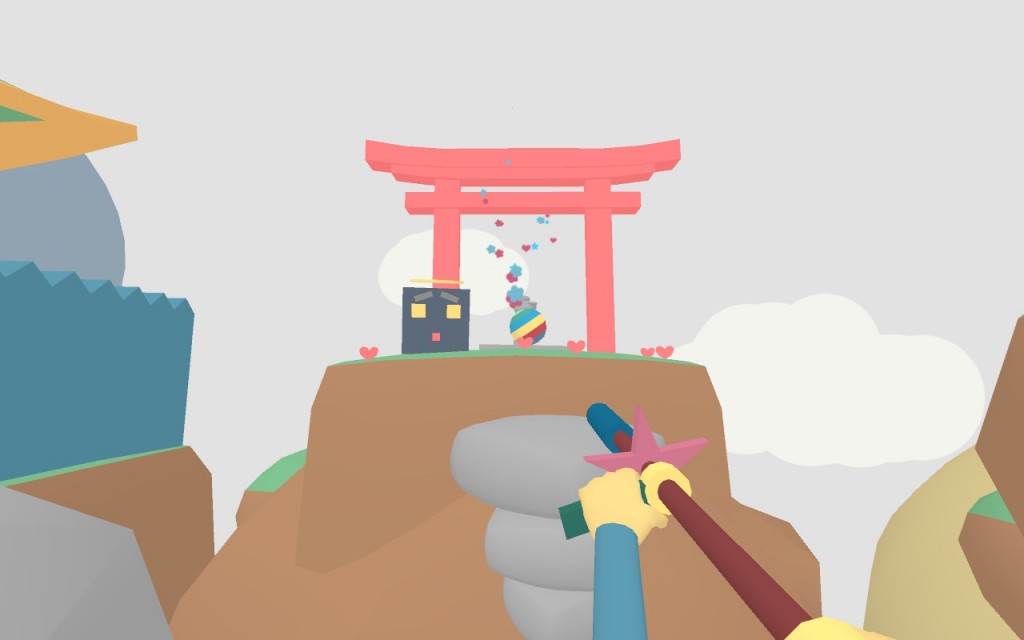 The biggest challenge comes with the aiming. When moving at a constant high speed it can be difficult to focus your aim, especially on the Dualshock 4 controller. This is helped some with a snap aim which allows you to lock on to the nearest enemy, however as the game progresses this becomes more of a set of training wheels in which you must learn to ween yourself off as hastily descending apple bombs become almost impossible to hit unless you are on top of them. The biggest oversight with all of this is the lack of a cross-hair. With this simple inclusion the aiming might have been a lot easier to deal with. 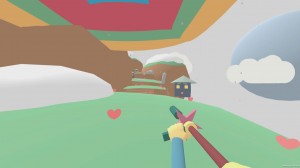 Another sore point is the music and sound effects. While it suits the happy go lucky nature of the game this can often be the most infuriating part. Listening to a trippy mass of instruments as you dodge about a day glow world can be fun at first however as die for the thirtieth time to a pink square it becomes a lot less charming. Each of the five worlds has its own musical theme but this does little to placate as it only becomes a new happy theme for even more deaths than the last part of the world.

Lovely Planet
7 Overall
Pros
+ Utterly compulsive + Katamari esque visuals which are refreshingly bright and cheerful. + Fast and fluent, it never takes long to start the game or restart from a death.
Cons
- The soundtrack will grate on most peoples nerves - No crosshair and very twitchy aiming - May not suit those looking for a casual blast through.
Summary
Lovely Planet is an utterly compulsive game which will interest those with patience and the utter will to succeed in creating the perfect run. It succeeds mostly as being a in between game time waster but can also be enjoyed as a game you play for hours on end, although the soundtrack might eat into your brain and invade your dreams for the next week or two. All in all it's fun, but it might not hold your interest for too long after its charm runs out.