I’ve always been a coward. Even as a bike lover, I could never bring myself to mount one and ride in anger. I value my skeleton too much. It’s why I take great joy from riding virtually and RiMS Racing is the latest effort to have me covered. Coming from Raceward Studio, their debut effort looks to bring mechanics and motorcycle fanatics together with a fairly sim-focused affair. 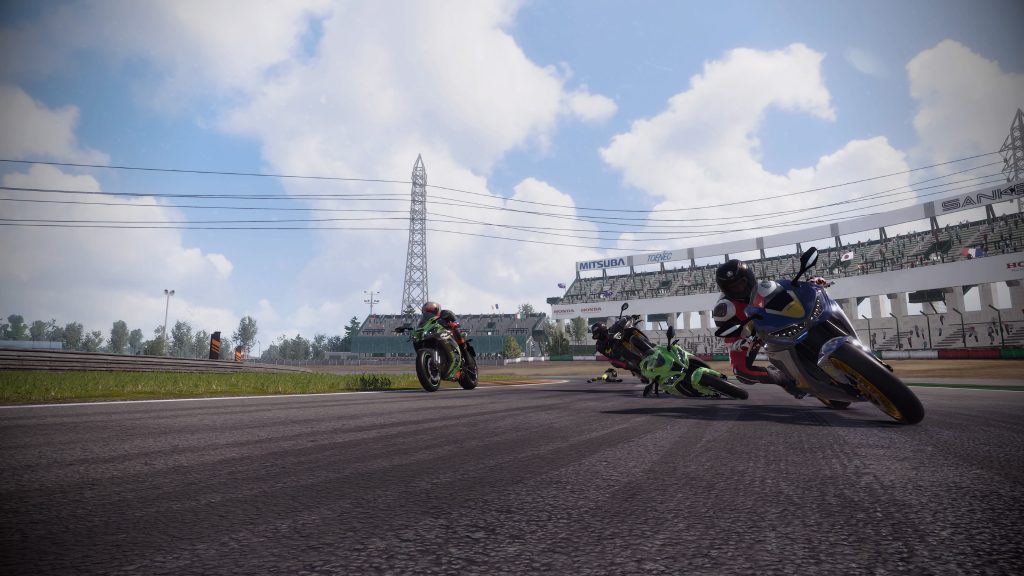 It handles quite nicely. Options are a little light but you have three degrees of physics simulation to tweak whilst you can also alter AI difficulty. Beginner can still be a handful as you get to grips with how RiMS Racing deals with its bikes. To put it bluntly, they feel quite weighty and the rear wheels handle most of the power. Quick changes of direction can be tricky but the handling feels fairly consistent and responsive. There’s a learning curve at play but the controls are up to it.

The DualSense is used to great effect. So far my time with the controller has felt very much a gimmick but RiMS Racing uses the speaker and haptic feedback to really hone in your senses. Tyre squeals come through to let you know they’re at their limit and braking on worn tyres feels appropriately turbulent. Whilst there’s some good visual cues to show a bike getting out of shape, bolstering that with some good audio design helps you understand what the bike is doing.

It’s immersive and, as a wannabe rider who never took the plunge, it helps bring me closer to the real experience. You can hear gravel being kicked up when you’re running wide, hitting kerbs too hard is felt in your hands and you hear when bumps lead the bike to leave the track. It feels consistent and strangely educational and, as someone who doesn’t go the whole hog with a sim rig, it’s nice to get a piece of that feeling. 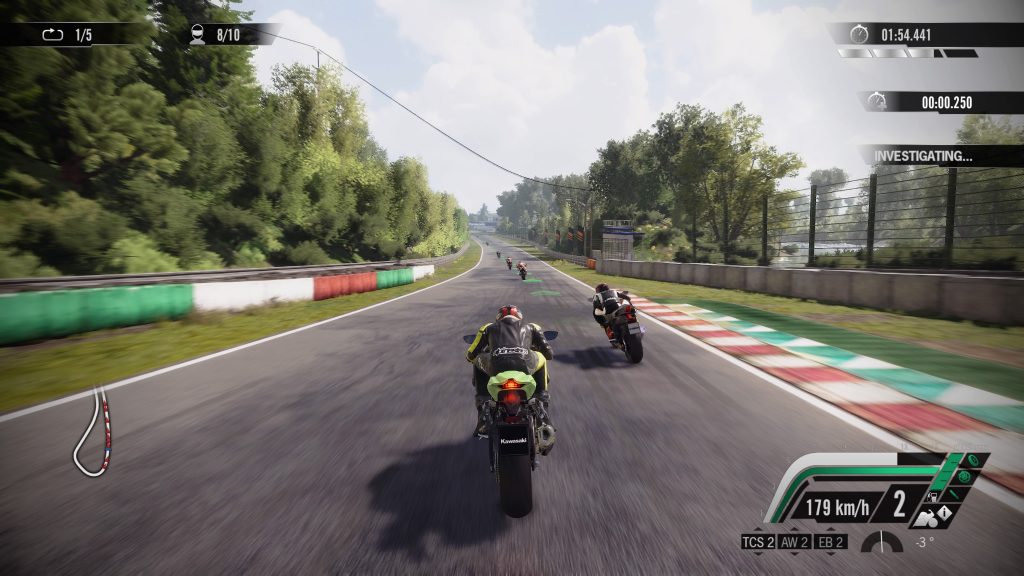 It’s unfortunate RiMS Racing feels so lacking in bikes. You have half-a-dozen off-the-shelf bikes to choose from and they all seem of the same ilk. Suzuki, BMW, Aprilla, Ducati, MV Agusta and Kawasaki send their flagship superbikes but the list is sorely lacking in variety. They have their different quirks and characteristics but I would’ve preferred a selection of bikes that wasn’t so narrow. They do sound individual with some bellowing engine notes but a more diverse grid would have helped this game in no uncertain terms.

You can unlock these bikes through the career by beating manufacturer events but you’ll see a lot of them as you move up the ladder. The repetition extends to the tracks. On the face of it, there’s over a dozen. Some of the world’s most recognisable make an appearance. It’s a predominantly European offering but the likes of Silverstone, Paul Ricard and the Nurburgring GP circuit are joined by Laguna Seca, Suzuka, Fuji and Mosport. There’s also a handful of point-to-point efforts that offer roads untravelled. These roads are trickier to ride with a lot less room for failure. They’re a welcome addition but the total tracks on offer do seem a little slim.

It doesn’t help that you revisit the same tracks frequently. The career mode is fairly lengthy and, whilst the tracks can be fun to master, you see them all too often. Weather and time of day does offer a change in conditions but the pacing and structure of career mode does sap some of the life out of it. I like Zolder but I’ve spent so much time there I should have a Belgian passport. 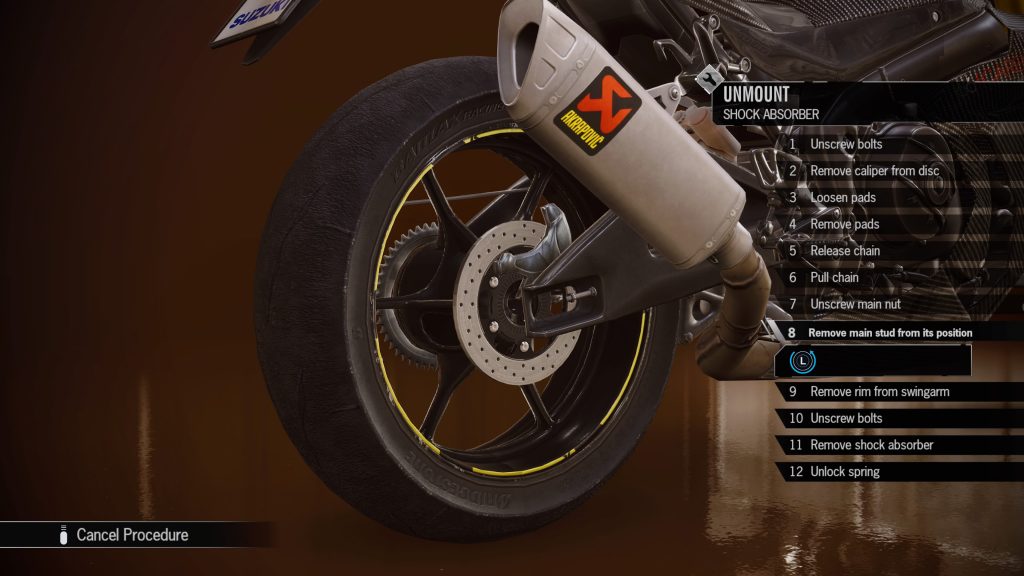 The career mode has a fairly basic structure. There’s 70 events you can participate in during a season and you do have a few to choose from. The majority of them are short circuit races, usually around 5-7 laps long. Head-to-head events task you with a one-on-one race. These are usually where the road races are showcased and they do break up some of the more monotonous events. At it’s heart, this is still a game about the track day experience. There’s academy events that task you with specific objectives. These do give you opportunities to learn about tyre management and preserving your bike’s components.

For all the malaise I’m feeling from the career drudgery, the bike management aspects really bring something different. Whilst the bike selection is paltry, the customisation and upkeep of your ride does give you a real sense of ownership. Your bike has countless parts that wear during races and and it does influence how I tend to ride. I’m a lot more cautious and turn my aggression down just a touch.

You have a shop on offer to purchase new components that can really change the look and feel of your bike. You can really tear a bike down and rebuild it and the process you go about it is actually quite tactile. Through button prompts you replace parts in a very step-by-step process. A little like the riding, it feels somewhat education as you see how parts are mounted on a motorcycle. It’s not quite handbook levels of dedication but it is fascinating to see how a bike comes together. The novelty can wear off quickly, especially if you’re eager to get back to an event. Luckily you have skill trees to put points into which does speed those processes up. It’s all presented nearly as screws pop out, farings and calipers move out the way and it really sells a bike of your own creation. 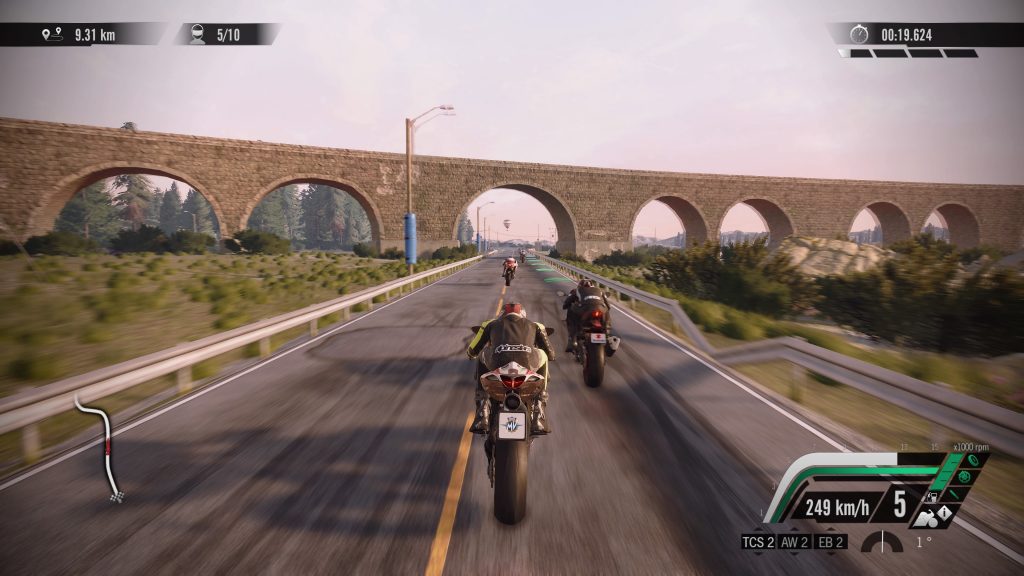 Visually, it’s decent if not especially memorable. The bikes are modelled well but the circuits look a little lifeless. It’s probably the problem with recreating such familiar locales but they do stretch their legs a little with the fictional roads. Riding along airstrips and taking in some of the scenery can be nice.

The cheaper price is probably indicative of how slight this game can sometimes feel. RiMS Racing has executed a lot of its new ideas perfectly. The handling feels challenging and playing bike mechanic can be an interesting experience. With a few more tracks and a wider variety of bikes, this would’ve felt more complete.

RiMS Racing
7 Overall
Pros
+ A challenging, enjoyable racer with great handling.
+ Excellent use of the DualSense that provides great feedback.
+ A lengthy career mode with plenty to do.
+ Tearing down and customising your back has a really tactile feel to it.
Cons
- The lack of circuits can make the career mode drag at times.
- Very little in the way of bike variety.
- Fixing your bike can start to feel time consuming and a little tiresome.
- Feels like a polished blueprint rather than something more complete.
Summary
It's clear RiMS Racing has some good new ideas and a handling system that's greatly complimented by the DualSense controller. It's a pity the bikes and tracks on offer lack some variety. Repetition sets in with a lengthy career mode but it's clearly an enjoyable ride and customising bikes can be an engrossing, meticulous process. At times, the slim content can feel strung out but there's an impressive foundation to build upon.