Ratalaika like to vary up the genres they publish. This week’s title, Orbibot, doesn’t fit neatly into a genre really. It’s a physics based puzzler, but the physics apply just as much to the character you are controlling as it does to the objects you’re manipulating. 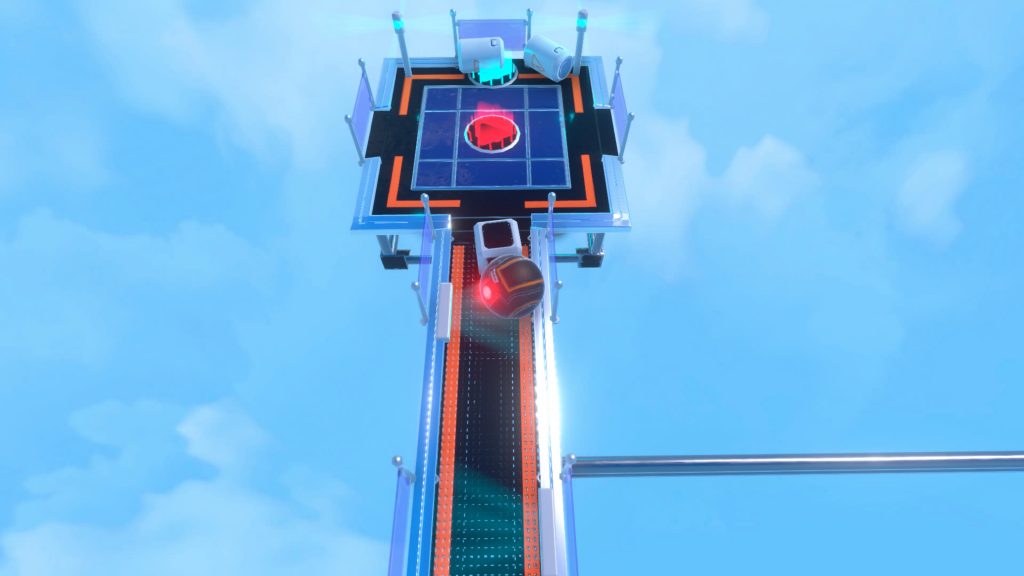 You control the titular Orbibot, a spherical robot. There’s no plot, you just have fifteen levels of obstacles and puzzles to complete. All the levels are suspended in an infinite sky, with metal catwalks the only thing stopping you falling.

Controlling Orbibot is simpler than you may imagine, you just push the left analogue stick in the direction you want to go and it’ll roll that way. You don’t have to worry about tilting the level or even momentum really, your ball is very light and although it rolls around the level it does not act as you might expect a ball to move or react. This is actually a major problem for a couple of reasons. 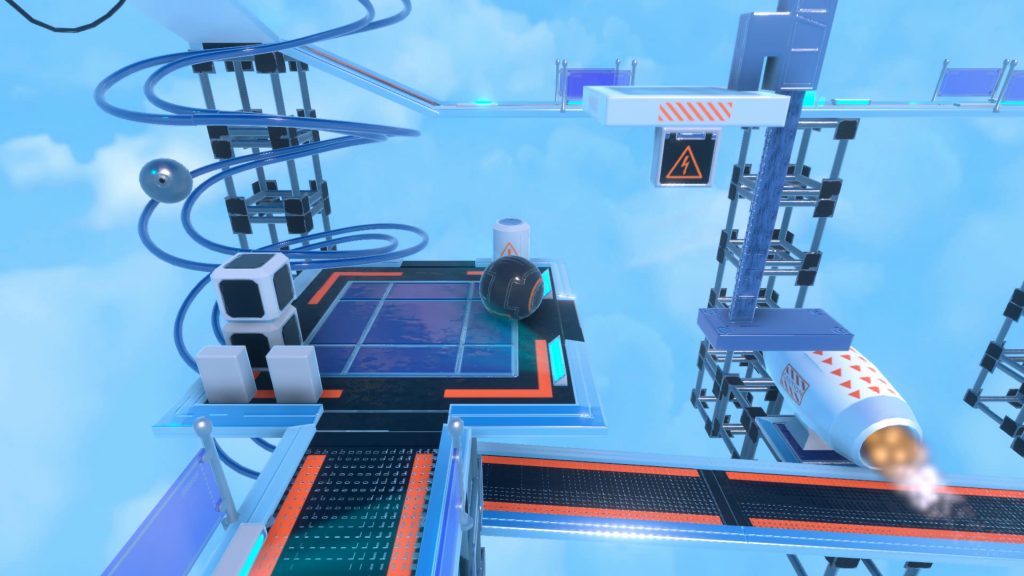 At its most basic you just need to get around a level. At its easiest that’s simply moving around on those catwalks, there may be barriers that will stop you from falling off the edge or there may not be but this shouldn’t be a problem. Even if you do fall you just respawn at the beginning of the level or at an activated checkpoint, everything you’ve done still persisting. Sometimes to get higher in a level you’ll need to travel on some rails and this is always a massive pain.

Being a ball you’d think having a rail on the left and right would hold you in place perfectly to travel around no problem, but you are so light that you can actually climb out of the rail incredibly easily. You get used to pushing the analogue stick very gently and that seems to do the trick but this results in you moving so slowly as to affect the pace of the game and if you do fall off enjoy doing it again. 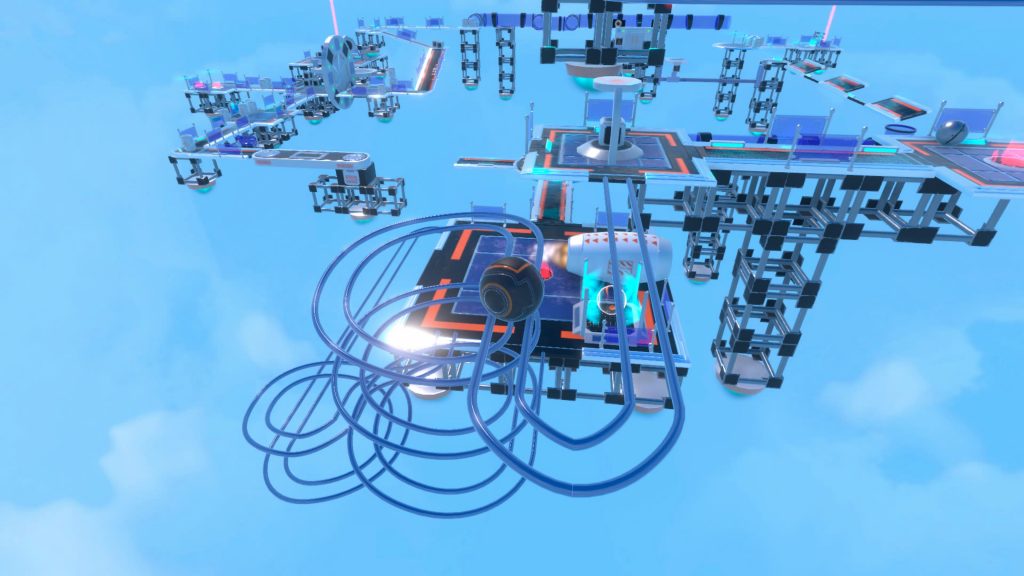 Beyond just getting around there are switches to press, either once or by pushing a box or ball onto it to hold it down. These can activate lifts, bridges (again, very slowly moving), jet engines (which blow things), conveyor belts and unlock doors. Later on lasers get added to the mix, not death dealing ones but that need to be pointed at a receiver to act as a switch as well. These are awful as they can be rotated 360° and require perfect precision which the ball just can’t deliver. Even pushing boxes around is a pain though, as if they’re sliding on ice.

You’ll encounter an ever increasing mixture of these things as you progress through the levels though things never get too difficult. In fact, thanks to the weight of Orbibot certain levels can be ‘speed ran’ quite easily. By that I mean if you start on a higher platform than the end then you can literally fall off the edge, gain momentum in a direction as you fall and land at or near the end of the level. I did this on one of the final levels, correctly titled ‘Broken’, which was supposed to be an obstacle challenge with you rolling over thin beams and angled walkways. I’m not a speedrunner, looking out for short cuts and ways to break games, but here it’s so easy. 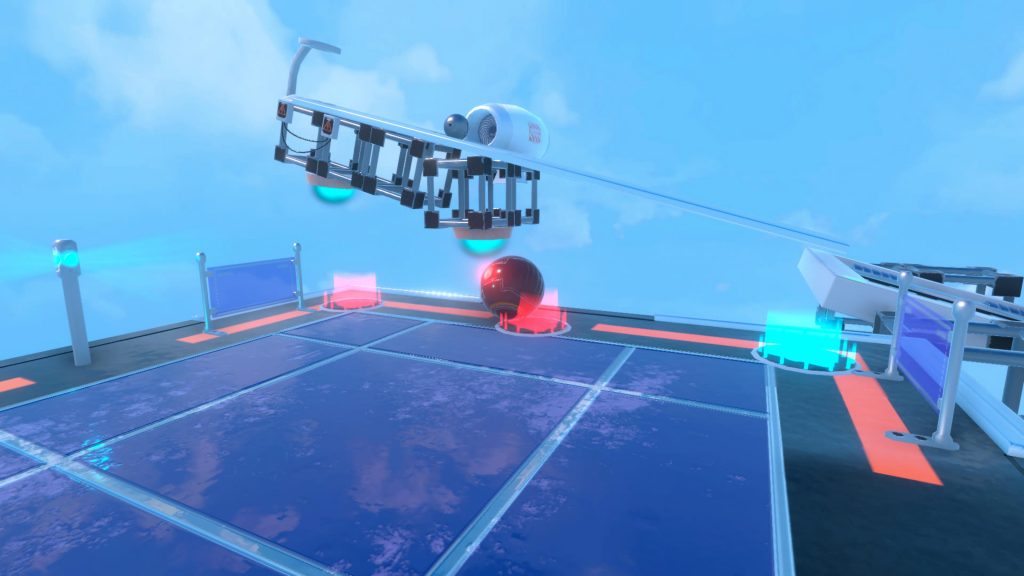 It reeks of a lack of testing, or maybe the developer wanted a speed run element, but the levels aren’t timed so it doesn’t seem so. The aesthetic never changes, but the visuals aren’t bad so there has been some attention paid there, though they are quite simple. I ended up turning off the bloops and bleeps of the robot across the couple of hours it took to finish, they quickly started to annoy with their repetition and regularity.

If you get to the final level then you also get greeted with intermittent freezing when interacting with the lasers or more specifically the mirrors that reflect them. I was worried for my PS5’s life. I made it through however. Being a Ratalaika game you may never see that far, as you can get the platinum in ten minutes after beating the first three levels, finding some ‘hidden’ objects and knocking a few different objects into the abyss. 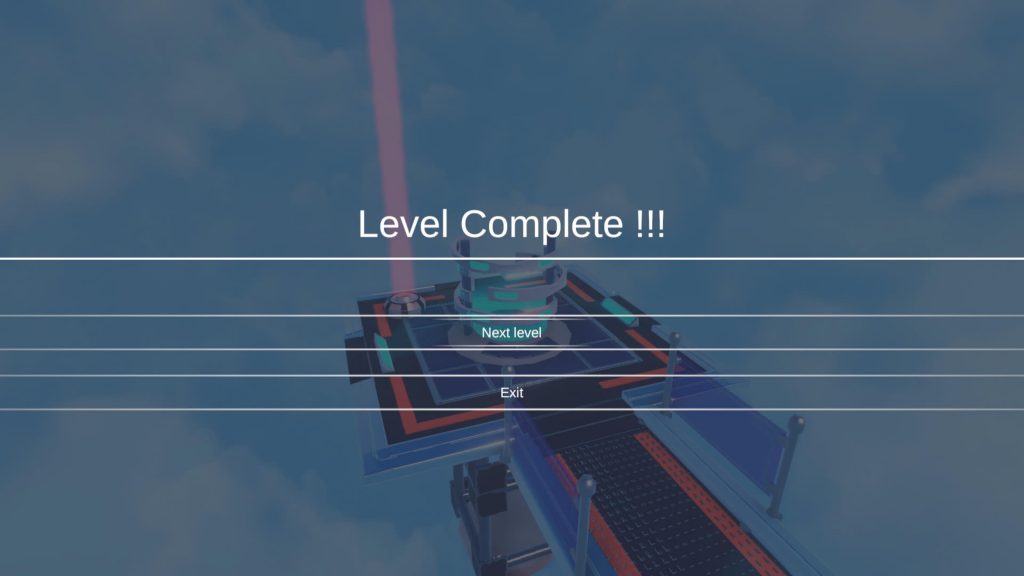 In all honesty I can recommend not moving past the platinum (or two since you get both the PS5 and PS4 version for £4). The controls irritate throughout, more puzzle elements do come into play but they aren’t challenging. A puzzle game where moving the character is more difficult than the puzzle solutions probably isn’t worth your time. You may get some joy from it if you like games such as Switchball but even if you do go through all the levels it won’t take you long and won’t leave an impression.

Ratalaika’s varied approach can bring out some gems but Orbibot is not one of them. At least it’s not another visual novel.

Orbibot
5 Overall
Pros
+ Decent variety of puzzle pieces
+ Visuals are okay if repetitive
+ Speedrunners paradise!
+ 10 minute platinum
+ Cheap for PS5 and PS4 version
Cons
- The ball controls feel off from the start
- Poorly designed levels
- 10 minute platinum, 2 hours total
- Worrying freezes on final level
Summary
Orbibot offers physics based puzzles whilst controlling a ball. Unfortunately the controls never feel right, making achieving what you're trying to do harder than figuring out what you have to do in the first place. Still, another easy platinum (or two).