Of all the hobbies I’ve latched on to over the years, gaming’s probably the one that’s stuck with me throughout life. I’m not going to crowbar some sentimental nonsense into this review but I’ve not seen the time I’ve spent in front of a computer or console as wasted. That said, I don’t quite let it consume me. Arcade Spirits: The New Challengers is a visual novel dating simulator from Ren’Py that continues where the previous game left off. As such, it’s very heavy-handed in gaming references and steeped in gaming culture. Perhaps a little too thickly for my liking. 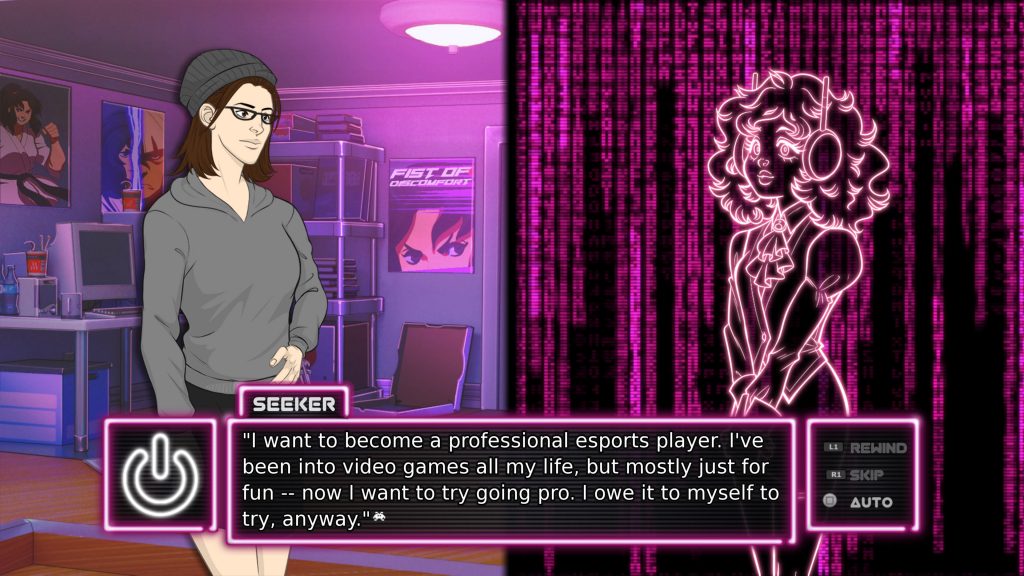 The story of Arcade Spirits: The New Challengers has your character moving from armchair gamer to managing an aspiring eSports team. It’s a fairly sudden change and the team is assembled quickly, but there’s a lot of relationships to build along the way. There’s a ready-made rival in the form of Hunter who has an opposing team of his own. Throughout the game, the two will clash in competition as you strive to become a force to be reckoned with.

It’s a fairly simple premise with most of your time being spent dealing with your team’s problems. Some of it can be pretty heavy with Jynx constantly wondering if her disability is a burden to the team. There’s some good character moments in there. Domino seems to be using gaming as an escape from a dull life whereas Zapper and Locksley almost act as caricatures. Sometimes the writing can be heavy handed but the interplay between you and your teammates is where Arcade Spirits: The New Challengers shines brightest. 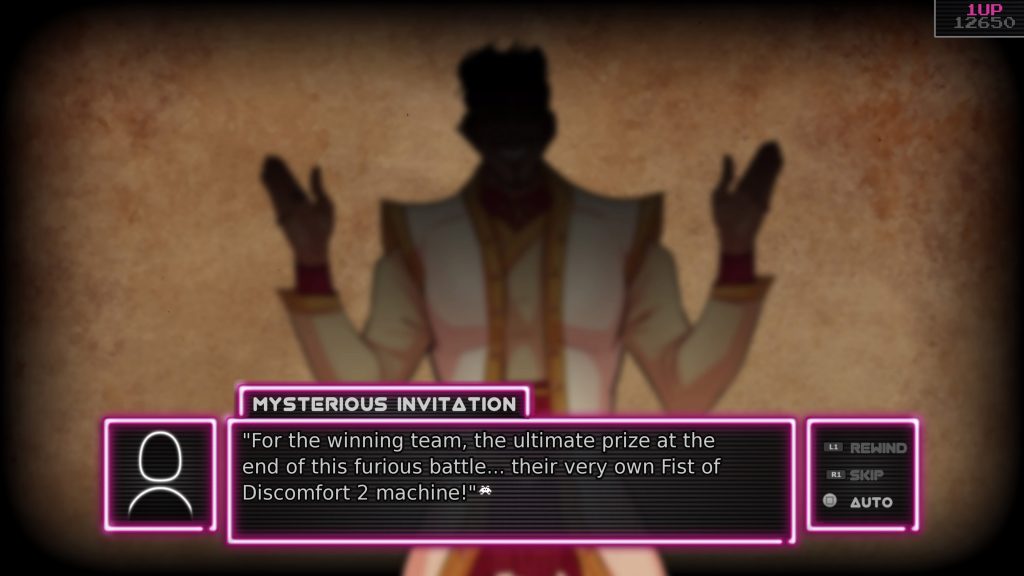 There’s other decisions to make as you get to choose sponsors, take opportunities to compete and decide who rides into battle with you. The eSport in question is Fist of Discomfort 2. This is a very simplistic game of rock, paper, scissors. It does give you something slightly strategic to do but you also have the option to skip these interludes and pick the outcome. Whilst that choice does keep the pace up, the addition of these minigames, like 슬롯 카지노, does give moments in the story some actual stakes.

In contrast, I find the script’s insistence on cringe jokes and memes to be insufferable. Some people might find it funny but I have a dislike for really playing up whatever this game counts as gamer humour. I had feared Arcade Spirits: The New Challengers would go this route and it’s all too much. It’s really holds stock in referential jokes and there’s registered trademarks all over the shop.

It’s laid on thick. These adults making references to games non-stop can make the exchanges feel disingenuous and they don’t quite feel like real conversations. This is compounded slightly by the voice-acted quips the cast will occasionally spout. Locksley’s probably my least favourite with his chivalrous waffle. By default, the spoken dialogue is minimal but you can turn it off or opt for full spoken lines. The performances are fine and fit the characters well. Zapper’s suitably aggressive and Iris is bubbly and helpful. There’s not much room for subtlety but I appreciate the effort of a fully-voiced visual novel. There are moments where unsavoury industry practices are commented on which show a level of seriousness but it does clash with some of the humour. 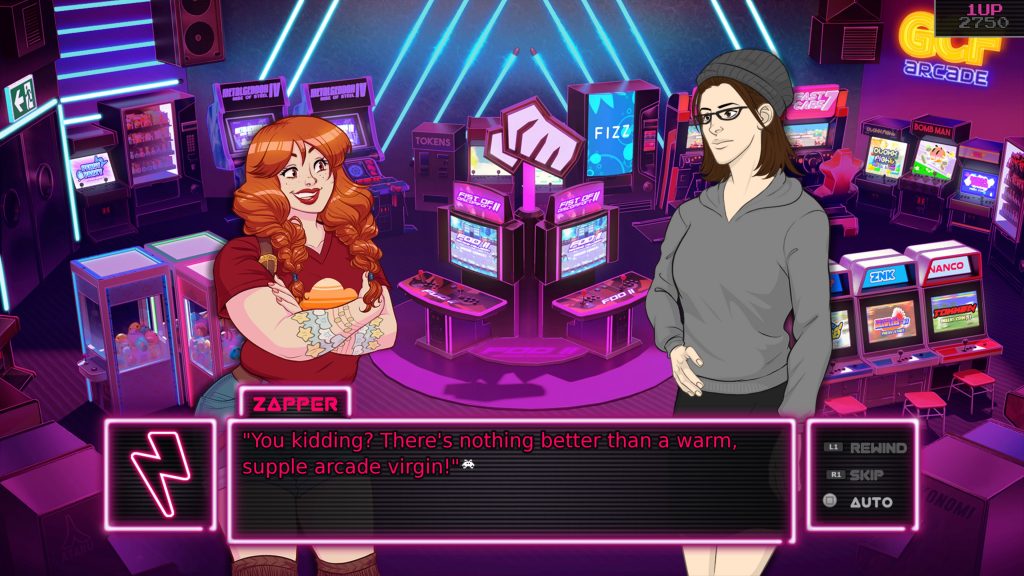 Despite these issues with the writing, there is a lot to dig into. There’s plenty of relationships to work on and, if romance isn’t your thing, you can still pursue friendship. Iris is your helpful computerised assistant who will guide you through the mechanics of dating. When talking to a potential lover or friend, each response will line up with a personality trait. Some responses are flirty, others are more balanced but they mostly line up well with the people you’re trying to woo. You can make these effects visible or keep things mysterious and turn those prompts off. Either way, this process is simple to grasp.

At the end of each chapter, you’re given a score and Iris will rundown your personality graph to show you how your responses have progressed. You can then choose to replay for better results or carry on to the next chapter. I do like how the chance is there to redo any potential mistakes. Again, it’s up to the player to decide if they want to roll with the punches but the options menu is pretty good at offering some flexibility.

The artwork is clean and bright with plenty of background references to keep your eyes peeled for. The characters portraits all seem to be idealised and attractive which I suppose is what you want from a dating simulator. There’s not much animation to them but I do like the small touches they’re given when they’re in the act of playing. Either with an arcade stick in hand or a racing wheel, it’s a nice little detail. The futuristic setting allows for plenty of neon and this aesthetic continues with a synthwave soundtrack. 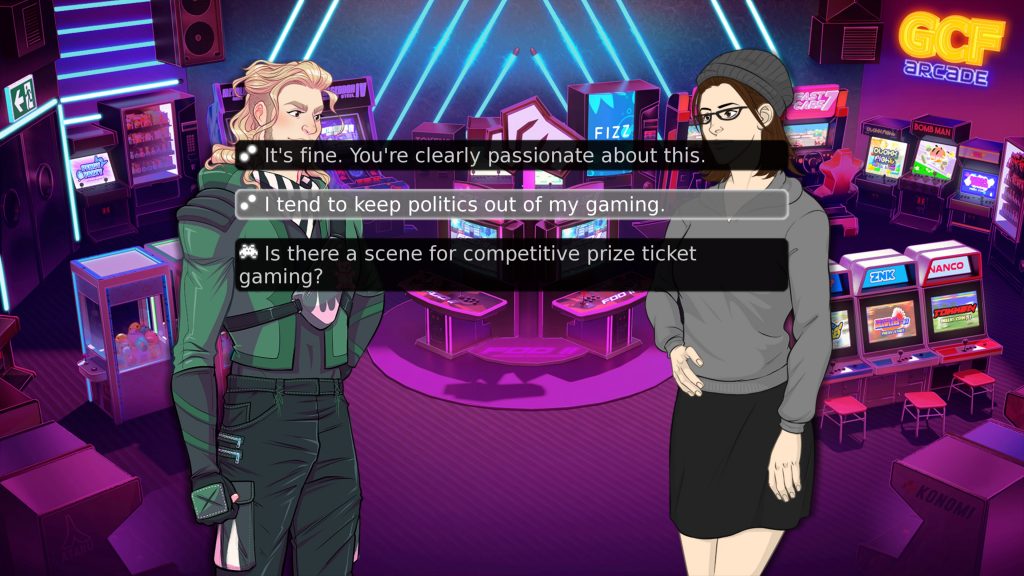 The tracks are decent although I do have trouble picking out any favourites. They don’t overstay their welcome but neither do they truly standout. The score is perfectly serviceable as background music and, given how much is voice acted, it would be detrimental to have it overpower the spoken dialogue.

I think there’s a lot to uncover with Arcade Spirits: The New Challengers. The cast of characters is fairly diverse and, barring a couple of exceptions, their personalities aren’t dialled up to cartoonish levels. I do find the references to gaming go overboard but it does seem to settle down once the relationships start to form. What it does well is the interpersonal struggles that make for an interesting time and the game keeps itself fairly colourful and light in tone.

Arcade Spirits: The New Challengers
7 Overall
Pros
+ Bright and colourful aesthetics.
+ The interplay between the characters works really well.
+ Forming relationships feels somewhat natural.
+ Plenty of relationships to pursue.
Cons
- The referential humour feels heavy-handed.
- A couple of the characters feel cartoonish.
- Fist of Discomfort 2 doesn't feel like a compelling diversion.
Summary
Despite the occasional clashes in tone, Arcade Spirits: The New Challengers does a good job of showing how to manage a group of strong personalities. The humour's not my cup of tea with a heavy reliance on references but there's enough minutia from the dating to keep someone interested. The presentation is colourful and, whilst some characters can be somewhat cartoonish, the voice acting gives them plenty of life.