I ended up coming around to Remnant: From the Ashes in my original review. At times it was frustrating and repetitive by design but the loop of replaying areas hoping to trigger an event you hadn’t seen in order to get different gear or traits became quite addictive and I ended up getting the platinum. The game has been supported very well since release and Swamps of Corsus is the first paid DLC. You may remember a swamp from the original game and you’d be right, this is that same area but more events, bosses, gear and traits have been added. 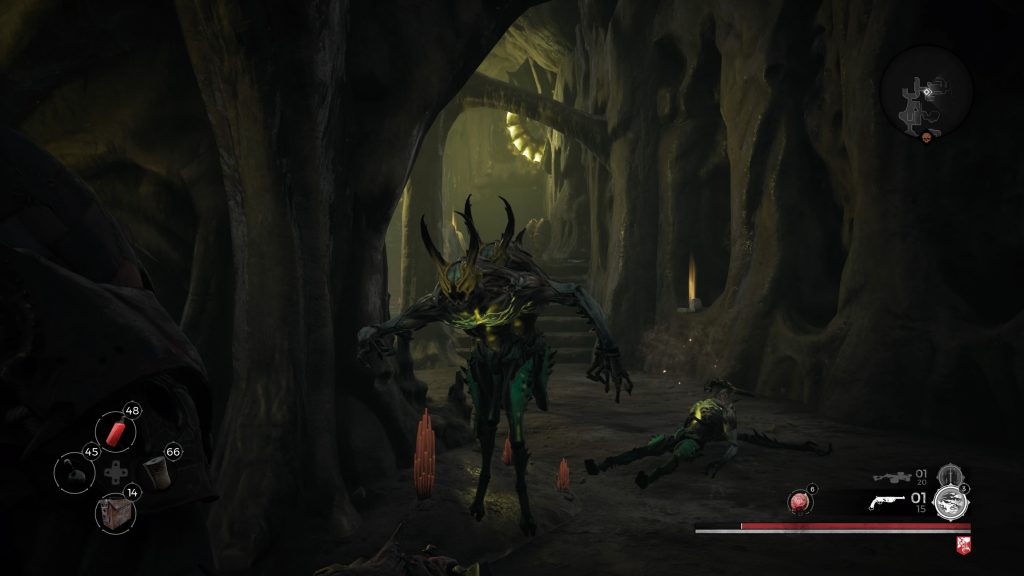 The swamp was actually my least favourite area from the original game I’d say, but part of that was down to how little there was to do and you could skip it entirely if you performed certain actions. The area has not completely changed and due to the randomly generated nature of the game you may actually need a few runthroughs to see new things. First time through I saw one new boss and I believe that was about it. Second time through I found a new event and a new boss. Apart from these everything else about the area was as I remembered it.

There are some new enemies that generally stick to the new areas, but depending on how many times you ran through it originally you may be hard pressed to notice a difference. There is new content though and with the new events, bosses and areas comes new loot, mods and traits. How useful you find these will be up to you and your build but more options is never a bad thing and it gives old players who’ve collected everything else something to aim for. 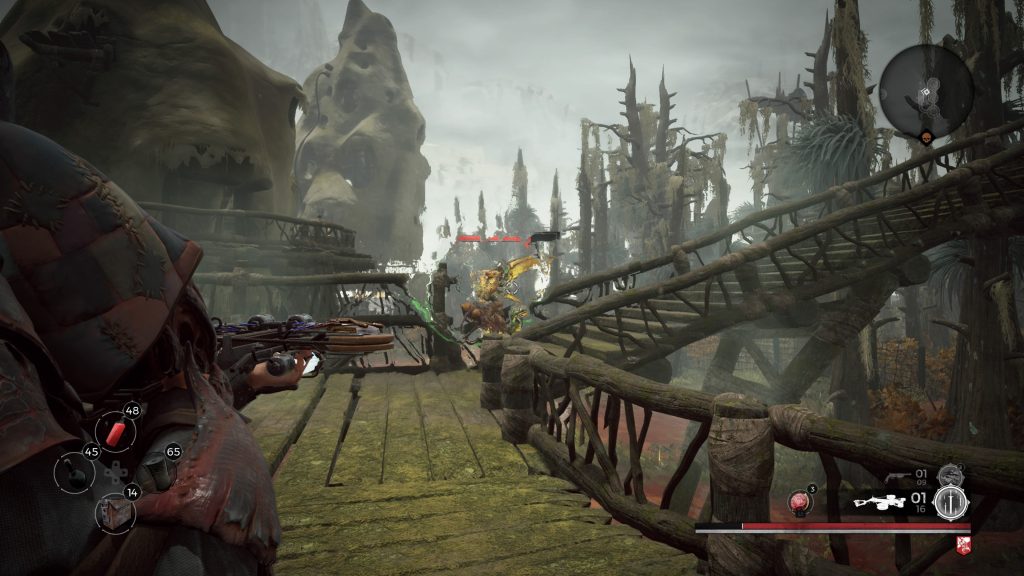 That’s it for the named portion of the DLC, but there is plenty more. As stated in the opening paragraph the game has been well supported since launch so you have all those balance tweaks and new modes. Adventure mode allowed you to reroll single areas rather than having to work your way through the whole game which makes trying to see all the content far more likely and I believe you actually have to access the new content through this mode rather than the story mode. Hardcore mode introduced permadeath and rewarded players for beating the bosses in this mode with items they could use account wide. There were smaller events added too and there is one major mode added with the DLC which is perhaps the most interesting.

Swamps of Corsus adds a Survival mode which basically acts like a Rogue-like, giving you one life to get as far as you can. You start off with a simple pistol, are given a tiny amount of currency with which to construct a limited loadout with some randomly selected gear before heading out into a random area. Whilst running around you’ll fight enemies, find scrap (currency) and level up but you’ll also find new gear and traits just lying around. Traits for those that don’t remember are your perks which grant you things like improved defence or faster movement or reloading. You’ll pick these up at random and they’ll stack if they’re the same so exploring is vital. 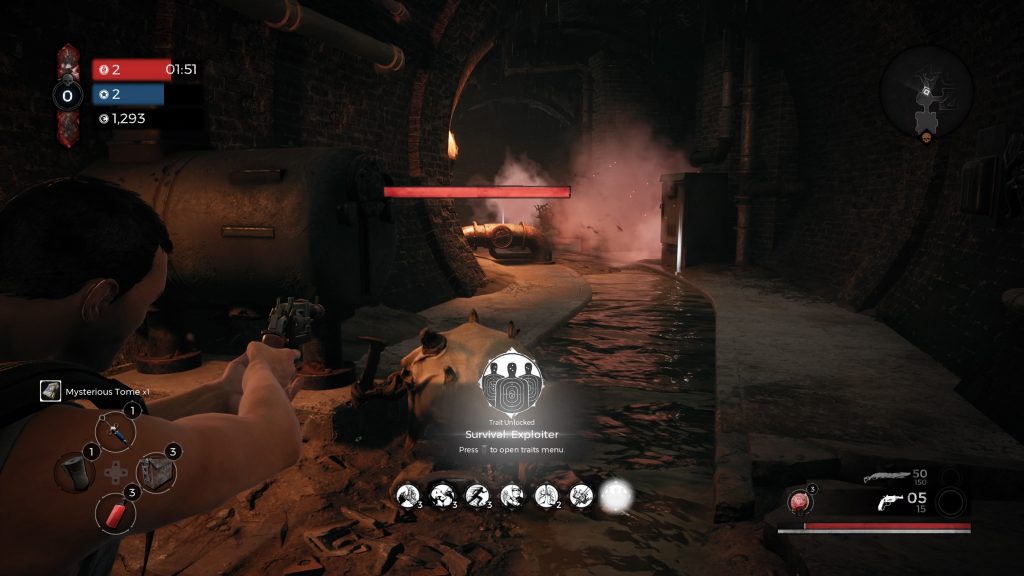 However, similarly to Risk of Rain, as time progresses the enemies become stronger so dawdling too much will make things harder for you too. Getting the balance just right is key and although this mode is separate from your main character you do earn materials which allow you to buy new skins for armours. Again, it gives you something to aim for and, to be honest, it’s just a fun mode. As weapons are random you can’t just rely on your loadout from the main game and have to experiment and as the basic shooting gameplay is so enjoyable it can lead you to discovering weapons you hadn’t bothered with previously.

My only real gripe with this mode is that you can’t save. I understand that juggling the multiplayer and single player aspect would be difficult but runs can last a long time so being able to stop and continue another time seems pretty important. Most of the trophies are based around the Survival mode and defeating ten bosses in a row won’t be a quick, or easy, task. The only other thing to really talk about is the price, which is very reasonable. The game itself wasn’t full price on release and this DLC is only £7.99.

If it was only the extras added to the campaign levels then it would be tough to recommend Swamps of Corsus. As you have to play through again and again hoping for the new content to randomly pop up it makes it difficult to gauge how much of it there actually is. My playthroughs have each been touched by the new stuff but it has been few and far between. Obviously if you’re looking into buying this DLC then you’ve played a decent amount of the main game so understand what you’re letting yourself in for. 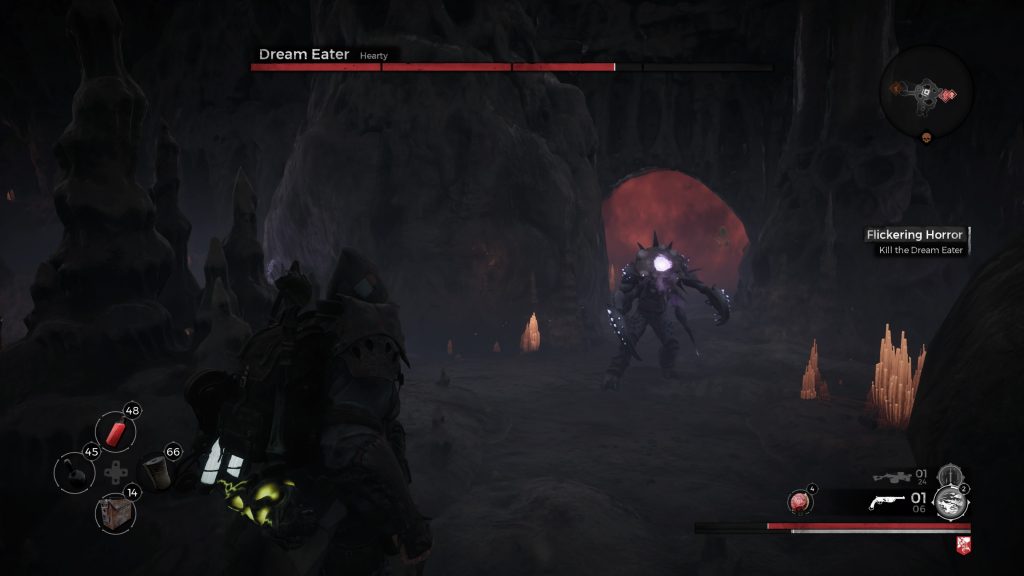 The addition of Survival mode however saves this DLC. That and coming back and seeing all the quality of life improvements have made this a very enjoyable DLC to play. The lack of saves means you have to be wary of your time when playing this mode unfortunately but hopefully that’ll be fixed in a future update as many other things have. Ultimately though, for the price, fans of Remnant: From the Ashes should check out Swamps of Corsus and people who slept on the full game upon release should give it a chance.

Remnant: From the Ashes - Swamps of Corsus
7 Overall
Pros
+ Some extra gear and traits
+ Does improve the swamp area
+ Survival mode
Cons
- Randomness dictates when you see the new content
- No saving in survival mode
Summary
Swamps of Corsus is a good DLC for the price. The random nature of the base game means you might struggle to see all the content it offers but the Survival mode is an excellent addition.