Redout 2 is the sequel to 2017’s original and is, as expected, another futuristic anti-grav racer in the style of Wipeout.  The original was well-received and the game’s Italian devs are claiming that this sequel is bigger, better and is the fastest racing game out there.  So how does it stack up in 2022 in a marketplace that’s rather lacking in this type of game?

Although Redout 2 has no real story to it, it’s a game that has some degree of lore behind the origins of the Solar Redout Racing League tournament and also the global locations, most of which are unrecognisable in their futuristic forms.  You play as an unnamed racer, unaffiliated with any team as far as we can tell and you just race.  A lot. 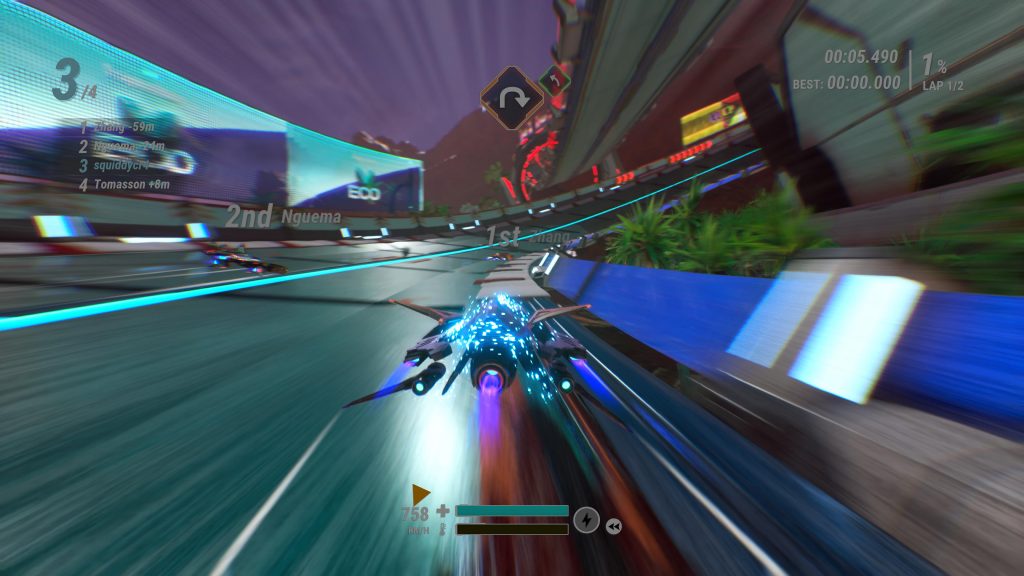 Initially, the game ships with a standard Arcade mode that lets you play all the tracks and use all the ships, in their original uncustomised forms.  You also get an online multiplayer mode (currently unranked only with ranked support due to come).  The main meat of the game though comes from the Career Mode which offers five progressively harder leagues to play through but offers ships, custom parts and liveries as unlockables.

This mode starts with several tutorials that take you through the basics of racing.  Redout 2‘s controls do take some mastering and so these aren’t to be skipped, but then you can’t skip them even if you want to and, for the third tutorial you’ll probably wish you could.  But before we get into why that’s the case, what you need to know is that while steering in this game is handled using the left stick, you’ll also need to use the right stick (which strafes) to reinforce some of your turns if you don’t want to crash into the wall.  You’ll also use that stick vertically to angle your ship’s nose so that you optimise your position on hills (both up and down).

Your speed is controlled with the triggers (R2 to accelerate, L2 to break) while the shoulders control boosting.  L1 is your standard boost while R1 gives you a hyper-boost.  These can be stacked too, allowing you to break those 1000kph speeds. 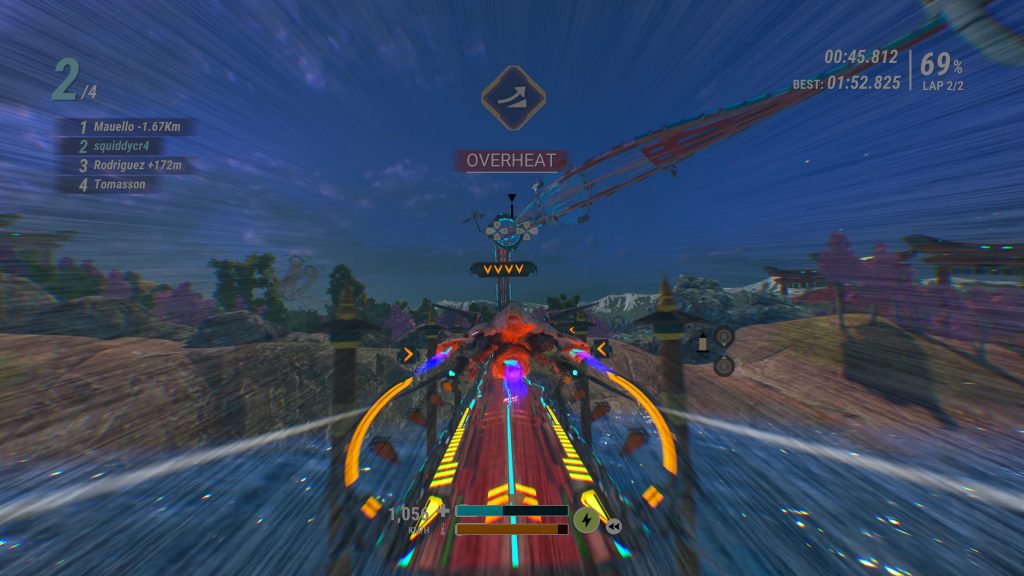 Now personally I tend to use my index fingers for the triggers, so having all four non-face buttons involved in such a fast and demanding game did take a bit of adjustment.  Thankfully, Redout as a series eschews the use of weapons (well, apart from in Redout: Space Assault which was a literal shoot ’em up) so your fingers won’t get too tied up in knots but having to deal with two types of steering, two types of boost and your pitch is a bit much at time.

While tutorials one and two explain steering and pitch, the third one is concerned with boost.  The system here is important to learn.  You can always access your regular boost while hyper-boost is on a cooldown.  Using either boost will heat up your ship and when it overheats, you’ll start losing health.  Run out of that and you’ll explode, losing valuable time as your opponents leave you in the dust.  So while you don’t want to overuse your boosts, you definitely need to use them a lot.  Your AI opponents are fast and skilled.  You can’t make too many mistakes if you want to keep up with them.  So this tutorial is all about maxing out your speed where possible.  Unfortunately it took us AGES to get past it with a lowly one star (out of three) ranking. 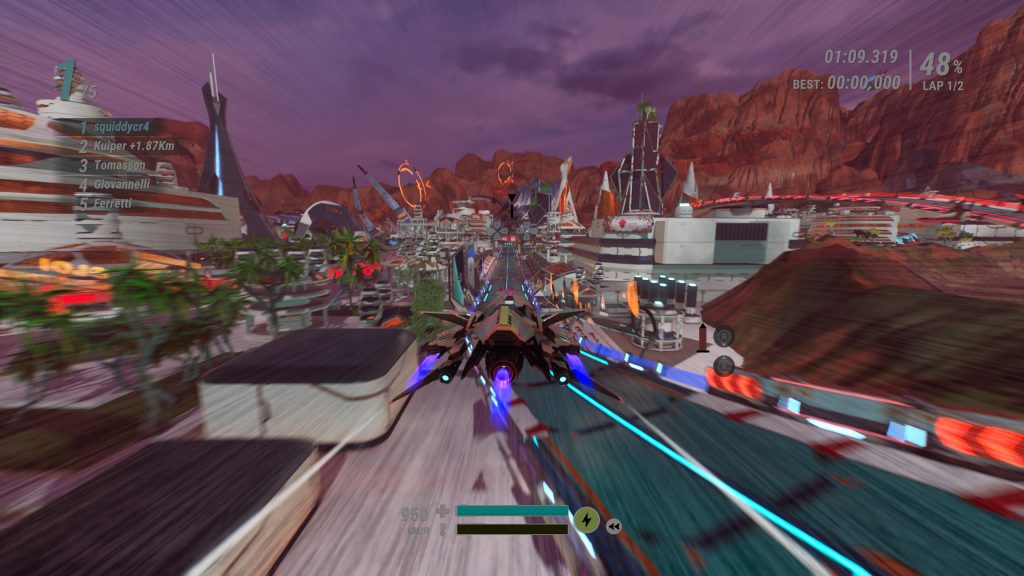 Until you get past it, the rest of the campaign is unaccessible to you.  Weirdly though, after you pass it, the campaign is a bit more open, allowing you to pick from a few events at a time.  Also, at this point you can lower the difficulty from the incorrectly named default setting (called ‘Chill’) if you get really stuck.  Or you can increase it as your skills improve.

Once you’re in the campaign, it’s now just all about the events.  Most of these are races where you face off against three opponents.  However, as you’d expect, there are also time trials, elimination races and ‘Boss’ races where you and 11 other racers ride across combined tracks.  This is a cool idea but these races do go on a bit too long.  Along the way you’ll unlock the ships and gear we mentioned and you’ll discover new locations and tracks to race on (unless you start with Arcade mode where they are all unlocked). 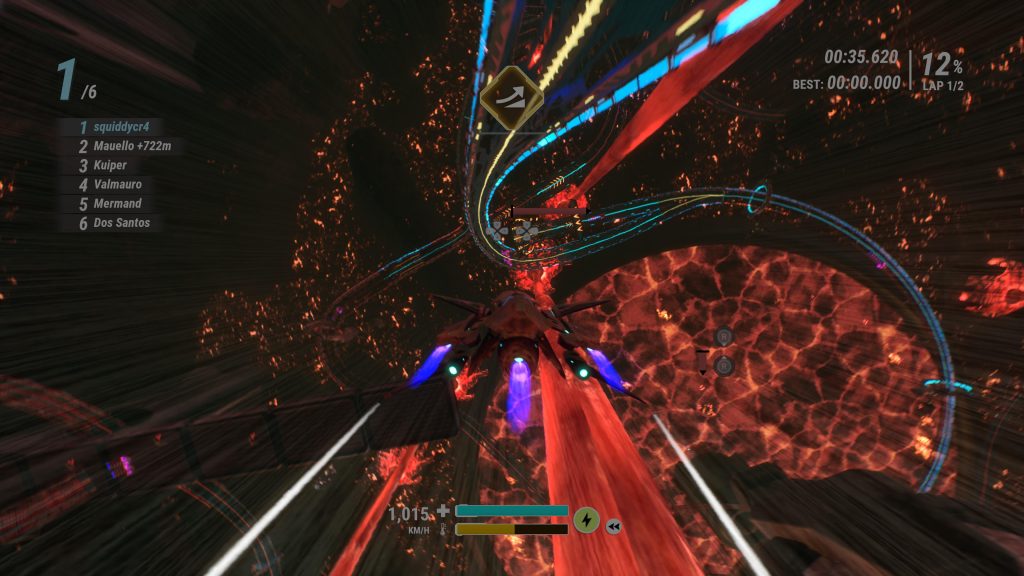 There are a lot of events.  There are five leagues and each one is unlocked after you earn a certain number of stars, well over a hundred between each one and given that you only unlock four stars per individual event, you’ll realise that you’re going to be here for a while.  Indeed, the overall structure of the game does start to drag, especially as progress gets harder as the tracks get more complex.

When you’re racing at full speed, and doing well, Redout 2‘s promises of speed and excitement are realised.  This is a ferociously fast game, smashing through limits that Wipeout and F-Zero can only dream of and when you combine steering skills, good use of boost and aggressive racing lines to winning effect, it’s exhilarating in a way that other racing games often aren’t.  Again, we’re so pleased that there aren’t weapons and power-ups to worry about. 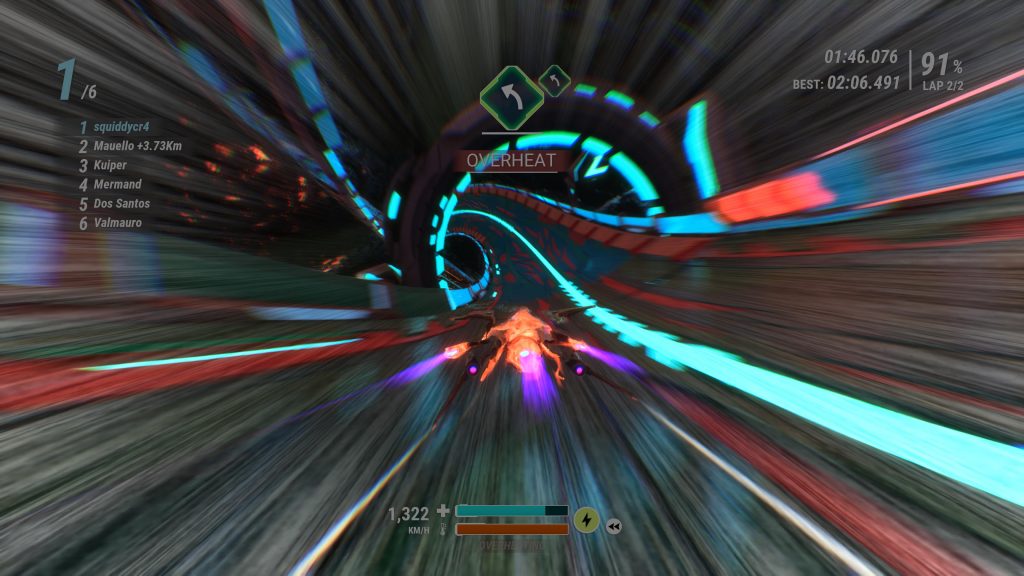 That said, the speed does come at a cost.  The twists, turns, loops and undulations of the tracks can be hard to read, with opportunities to crash into the track walls being an ever-present danger.  The game’s ferocious use of colour doesn’t help there either and you’ve barely got a chance to keep an eye on your ship’s health either.  Also, jumps are common across most tracks and these can be hard to judge when you can’t even see where you are landing sometimes.  Also, and this might just me, but we’re pretty sure we landed on some tracks and went right through them to an explosive death.  Later tracks can be a bit of a nightmare too as some go underwater, making them even less clear, while others remove trackside safety barriers and use slants and constant curves which make them incredibly hard to read.  As such, this is a game goes from being easy to get into and hard to master to just being hard.  Don’t expect to just blaze through the Career mode, it’s going to take a lot of time, a lot of patience, much practise and some true skill.

One big issue we had were the boost events that used the same format at that tutorial we struggled with.  They don’t get any easier and started to really annoy us whenever they came up.  Also, sometimes the enemy AI will get ahead of you and are seemingly impossible to catch up with.  Also, oddly, 34BigThings have made the decision to release the game without some key modes and features.  Along with ranked multiplayer, there are other modes that the menus tell you are ‘coming soon.’ 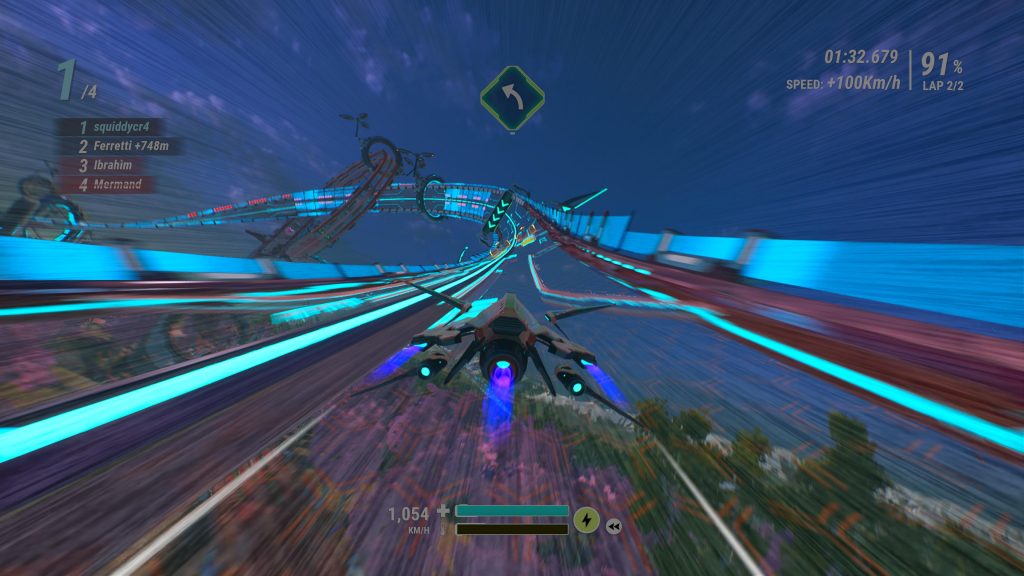 This seems like a mistake, especially the ranked multiplayer thing as we’re already struggling to find unranked matches to join.  We can’t see the community sticking around for these new modes to come and so they may have already buried this game’s online potential by holding off on adding them.

Visually the game is amazing at times.  The colourful backdrops pop against the wild track layouts.  Being a futuristic racer, there’s lots of neon, metal and translucent glass which all combine to stunning effect.  They’ve not cheaped out on the backdrops either, they could easily have boxed them out with arena walls, crowds and other close up details but each location is open, wide and full of colour and detail that your eyes won’t have a chance of seeing at these speeds.  Oddly the vibrancy of the games seems to completely disappear on the menus though as these have a horrible faded-out look to them that feels like a technical issue rather than a design choice. The soundtrack is suitably loud, dynamic and dancey but, as was the case with the original Redout, not quite as iconic as the old Wipeout soundtracks.

There’s a lot of racing to get through here and, well, this is a racing game so that’s fine.  It might get a bit much for some and the aggressive difficulty might put some players off (although once you get past the tutorial, this becomes very configurable) but if you want the fastest racer on the system and don’t want to compromise, this will keep the even the most hardcore speed freaks entertained for a long, long time.

Redout 2
7 Overall
Pros
+ It's fast
+ No weapons and power-ups to make things unfair
+ Vibrant visuals
+ Lots of tracks and events to play through
Cons
- The pace means you'll need to replay tracks a lot to learn them
- Visuals aren't always clear
- Some events are joylessly hard
- Career mode drags on for too long
- Enemy AI can be demoralising at times
- Much of the game isn't ready at launch
Summary
Redout 2 delivers where it matters with some of the fastest, most hardcore racing we've seen in a game. The bold visuals add to sense of excitement too. It's just a shame that the difficulty isn't more consistent and that the game is lacking in variation, especially as some of the gameplay modes aren't ready yet and will be patched in later when much of the game's already small community may have drifted elsewhere.