It isn’t often that a series will fundamentally change from one game to the next but when Italian coding crew 34BigThings revisited Redout, their super-fast, futuristic racer, they decided to turn it into a space-based shoot ’em up.  Redout: Space Assault is a third-person, into-the-screen shooter that has very little in common with its predecessor.

You play as Leon Barret, a pilot working a security detail for Poseidon Heavy Industries who are overseeing colonisation operations as humanity make the move from Earth to Mars.  The story is told at the start of each mission via text boxes (accompanied with voice acting) and it’s pretty much your standard tale of rebels and governments.  We were in danger of losing interest but it does take an interesting turn after a while.

Anyway, in terms of gameplay, you fly forwards through space either shooting enemies, taking down fixed turrets, collecting blueprints and resources or guarding mining ships.  The action is often on-rails but sometimes switches to fully free movement, usually for missions where you are searching for things.  Also, true to the series’ roots, you also get the occasional racing mission.  Whatever the mission type though, you are always in space with no surface action at all. 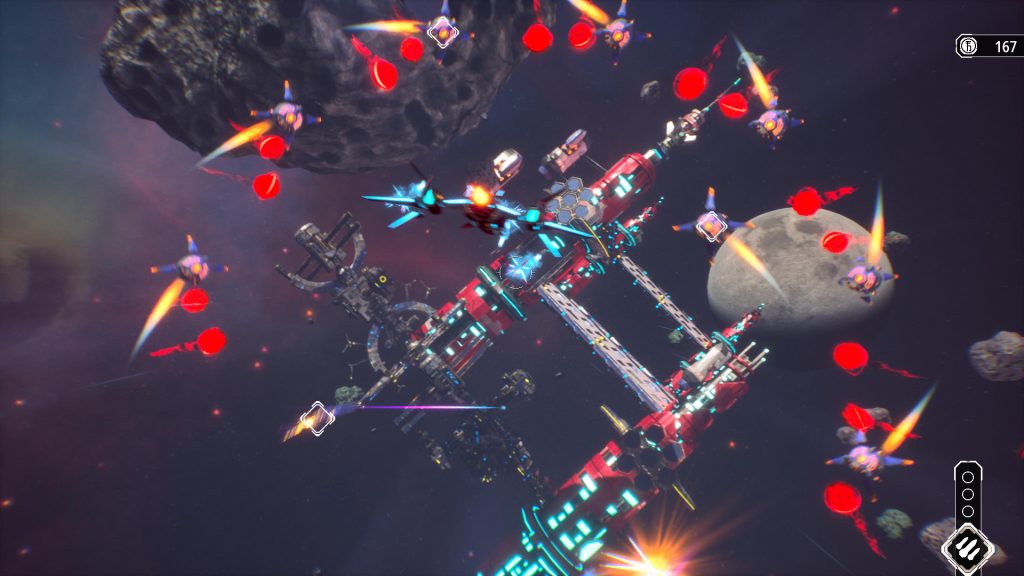 Our first impression of Redout: Space Assault wasn’t great.  The action felt kind of unsatisfying, a little unexciting and oddly slow considering the blazing speed of the previous game.  This was compounded by the slightly unintuitive controls.  We were wondering why L2 wasn’t working (it’s your primary fire button) but it turns out you shoot automatically and it was working, it was just hard to see.  You’d expect laser beams rather than what appears to be actual bullets.  Also, the missile system linked to R2 was also a bit unintuitive, eschewing the sort of lock-on mechanic that these games usually have.  Instead of aiming and holding a lock-on until it confirms, you just hold down R2 and it targets for you, you release to fire (or it will fire automatically if you hold for too long).  No aiming necessary.

So, initially this felt like it was going to be one of those reviews (trust us, it isn’t fun reviewing a game you immediately don’t like).  But eventually it clicked.  Once we realised what was going on with the weapons, things got better.  The game has nine chapters with usually four or five missions in each.  However, the fun of the game isn’t really in beating the missions but rather completing the bonus objectives which are usually for destroying a certain percentage of enemies, not getting damaged or finding collectibles.  Replaying the missions to get these objectives finished is also a good way to earn extra money and that can be spent upgrading your offensive and defensive capabilities, making the game more enjoyable to play. 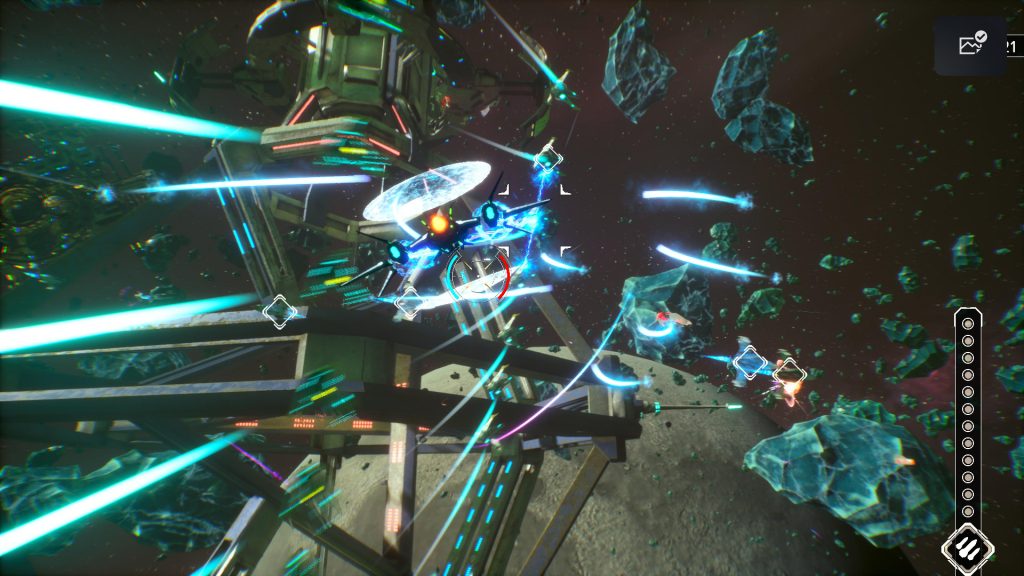 The action is okay at first but it does get better if you stick with the game.  Initially, you are just having skirmishes in space and winning those quite easily but eventually the missions become grander with assaults on larger ships and structures or battles against large numbers of enemy ships.  The on-rails aspect to the game works quite well at times too, guiding you through the action and giving it all a somewhat cinematic quality.  The last few chapters really ramp it up and by the time you finish the game, your opinion of it will likely have changed.

At first you’ll wonder why 34BigThings haven’t stayed in their lane and put out another futurist racer but by the end we pleased with where the game went.  That said, there are niggles that threaten to spoil the party.  Firstly, the race missions just don’t add anything apart from frustration.  They aren’t fast enough to be exciting and in many cases the on-rails engine finds ways to put giant obstacles in your way.  You also don’t feel very connected to your opposition because the game never tells you what position you are in (unlike, say, every other racing game or mission ever made). 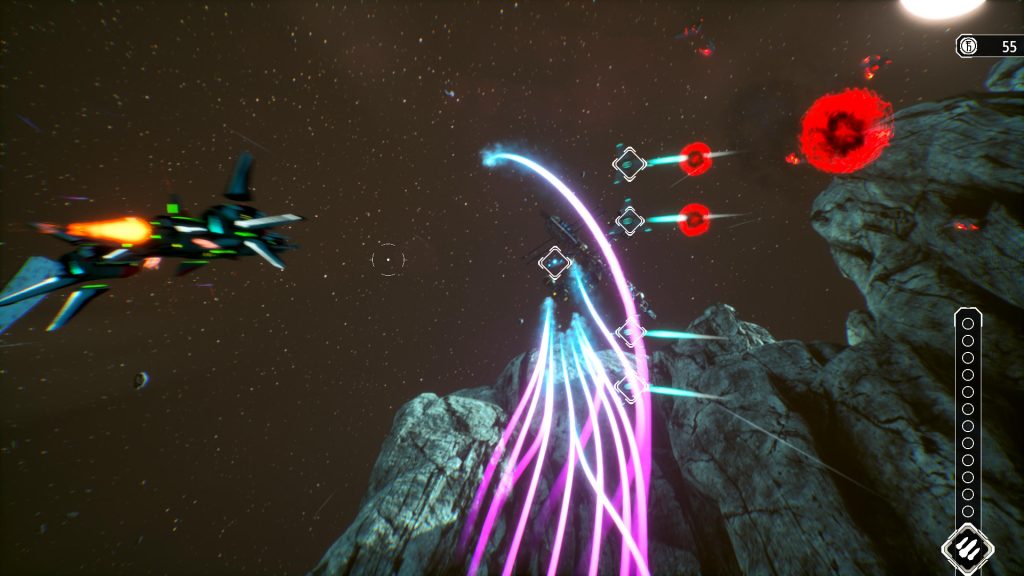 Then you’ve got other missions that just aren’t very clear about what they want from you.  Either ones where you are searching for things with no real guidance or others where you’ll fail and not be sure why.  Mission 7.2 for example kept failing us and we weren’t sure why until we realised that all those enemies we’d be targeting weren’t dying because, arbitrarily, they were all suddenly a lot stronger now.  It can be genuinely frustrating at times and usually for reasons that a fresh playtester would have picked up on.

The game is big on upgrading and this is a mixed bag too.  On the plus side, you can upgrade quite a lot.  For example, you can get your default payload of three missiles up to a very generous twelve and the cards that you earn at the end of the levels are quite an interesting way to focus on certain aspects of your payload (don’t worry, it isn’t complicated at all) but progress is quite slow.  You can upgrade your weapon, missiles, hull and shield up to level nine but each level has ten steps and these all have to be paid for with in-game rewards.  We’d rather the upgrades costed more rather than putting in ten upgrades in order to make one actual bit of progress. 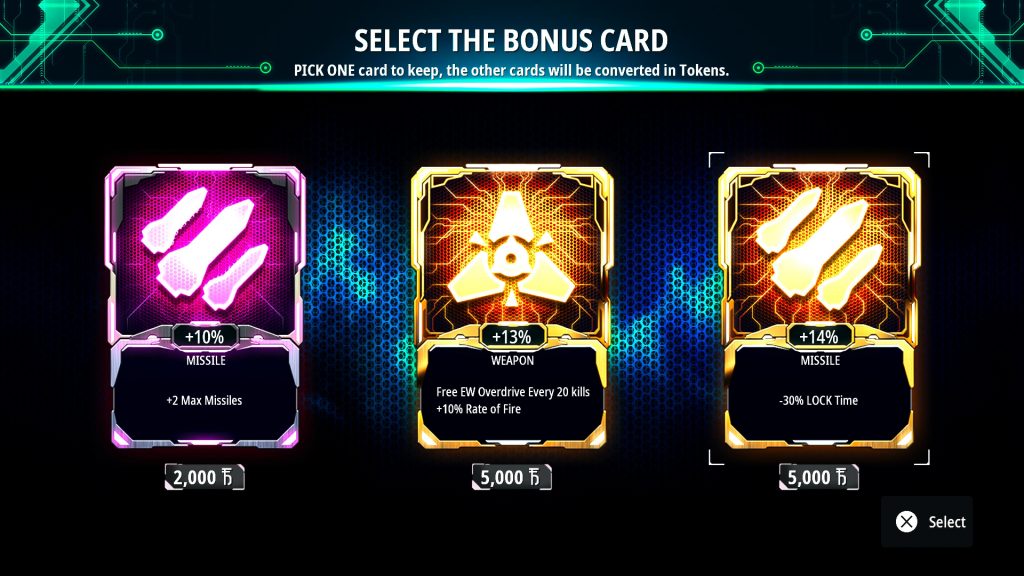 But despite all of that, we’re very satisfied with Redout: Space Assault but cautious about recommending it because of the first impression it gives.  That’s even true in terms of the presentation.  For example, the game’s menu systems are a relic to when this was a mobile game and visually at first it is very underwhelming.  With the emptier early levels, you’ll notice the flaws with the graphics a lot more.  From the always-on HDR which makes many of the levels look like they are covered in a layer of space fog to the way the heat warping of your jets makes it look like the screen is tearing, it isn’t a great look.  But later on when you are battling for your life against giant ships and space stations with energy bolts screaming across the battlefield, it all comes together and starts to look really good.

The sound isn’t bad either with good effects and a varied soundtrack but it is let down a bit by some terrible voice acting (especially from the Space Cat guy).  The story holds together well though and actually is more entertaining than you’d expect from a shoot ’em up.  The temptation is there to skip it but we’re glad we didn’t.

So overall, Redout: Space Assault does a lot of good things and a few bad things.  For everything we didn’t like about the game, especially at the start, by the end we saw positives in the gameplay, story and presentation.  Shoot ’em ups are usually more immediate than this, and PSN does have some great ones for Redout: Space Assault to compete against, but if you’ve got a bit of patience, this game delivers.  Eventually.

Redout: Space Assault
7 Overall
Pros
+ Later missions are very entertaining
+ Once it clicks, the gameplay is good
+ Upgrades are worth persisting with
+ Good story
Cons
- Some missions aren't very good or not very well explained
- The difficulty takes a while to kick in and then spikes a lot
- The on-rails aspect isn't always very helpful
- Visuals are a little messy
- Doesn't make a good first impression
Summary
Redout: Space Assault is an unexpected departure for the series but is a solid, enjoyable and reasonably polished experience let down initially by slightly unintuitive controls, some missions that don't really land and visuals that can be a bit cluttered. Stick with it though and this definitely worth playing.