Pocky & Rocky Reshrined is a top-down, multi-directional shoot ’em up based on a 1992 SNES game that was itself a sequel to an arcade game called Kiki Kaikai from Taito.  The game has been given the remake treatment by Tengo Project who developed Wild Guns Reloaded and The Ninja Saviors for modern consoles and so they have a good track record of bringing old games back for new audiences.

Although a remake of sorts, the game uses updated visuals, levels and gameplay mechanics to essentially push things forward a bit but from when you start playing this is pretty much classic retro gaming fare. 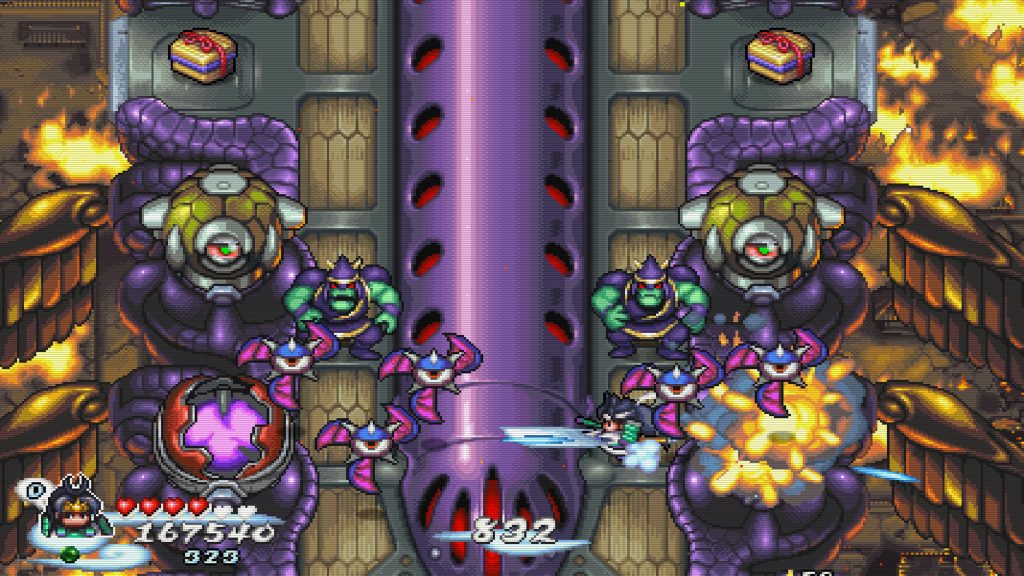 Set across eight stages, you get to play as Pocky (a ‘shrine maiden’), Rocky (a sort of weird raccoon thing) and some new characters who all have different attack configurations.  However, they all share common controls with a ranged attack, a melee attack that returns projectiles, a dash move and a smart bomb.  Movement is, of course, mapped to the left stick/d-pad but, annoyingly, so is your aiming.  You shoot where you are facing.  It’s true to the spirit of the arcade original but in 2022, you’d expect a top-down shooter to use a twin-stick control scheme.  Indeed, we’ve seen recent examples of ports/remasters where they’ve patched that in, so it feels like a huge omission here.

The reason it’s a problem is that you’ll often need to attack from a diagonal direction and you just can’t rely on the controls for that.  They are a bit twitchy and feel like they favour going to one of the four main directions instead and because you have to move to re-aim, that can be a bit of a faff to deal with. 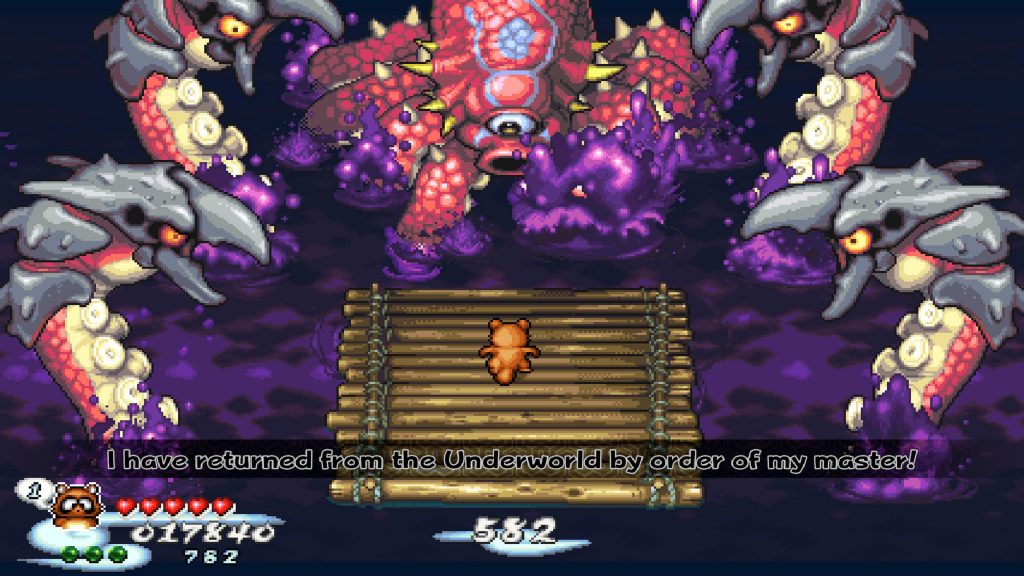 It’s also a problem because the game is pretty tough.  After a gentle start, you’ll start taking damage quickly from all manner of enemies and environmental dangers.  Unusually for a shoot ’em up, you can’t really take things slowly either as enemies will spawn back into the play area.  This is quite hard to deal with intuitively as we just don’t see that from shoot ’em ups.  Normally things stay dead and so for a while there we were really thrown by this game’s core mechanics.

However, after a while you should settle into the pace of the game and then you can start enjoying what it does well.  From it’s colourful, chunky visuals to its modernised-but-arcadey soundtrack, the game has a lot of confidence.  Sure, the cutscenes are more of an annoyance than being anything interesting, but the game’s different enemy types and environments make it one where you want to progress, just to see what happens next.   The multi-directional scrolling also allows the game to put in memorable sections that help break up the action, even if you are still just shooting most of the time.  We’ve always said that games just need to give you something fun to do and something interesting to look at and Pocky & Rocky Reshrined manages both. 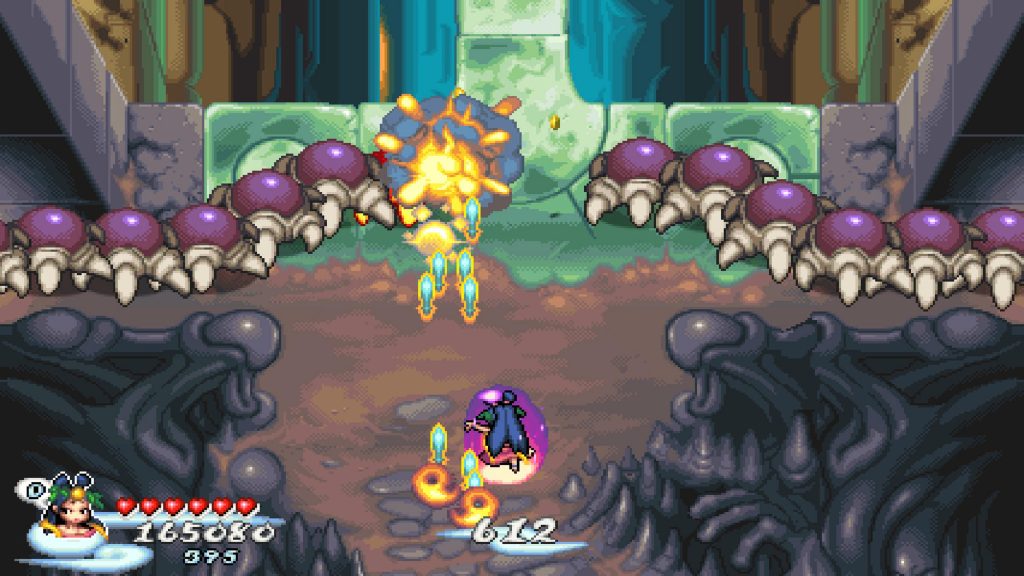 Compared to the original SNES game that first used the Pocky & Rocky name, there’s plenty of similarities with the return of certain memorable sections such as the raft river ride and the airship level but the game remixes and adds things too.  It’s a little slower than the original but just as tough.  Indeed the difficulty might be an issue for some with enemies being capable of ganging up on you in ways that can initially seem quite unfair and some of the boss battles aren’t for the faint of heart either.

If you’re looking to just get through the game, there are infinite continues and death will only take you back to the last checkpoint.  We found the spacing of these to be quite fair, especially at boss battles, but even with them it can be quite tricky to complete the game on its Normal difficulty.  You can earn an Easy mode option by picking up a certain number of coins but we persisted with Normal.  Beating the game also unlocks Hard mode which is more of the same but with more enemy bullets (including revenge bullets from downed enemies). 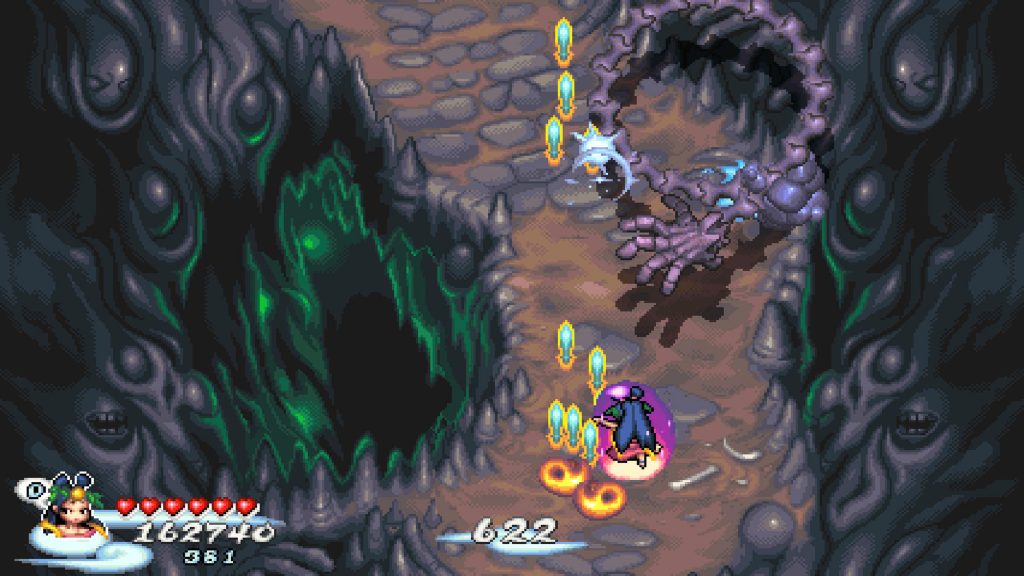 For those of you who are looking to master the game with a 1CC (and you’ll need to if you want to get that Platinum), you’re going to have your work cut out for you.  There’s no practice mode either which is a shame if you want to get familiar with the game’s harder sections.  Also, while we’re talking about it, level 7 was BRUTAL.

Anyway, a few niggles aside, this is a really good example of a retro port done right.  It keeps all of the charm of the original and any changes that it makes are respectful to the source material.  The visual upgrade is surprisingly tasty too.  It takes the original graphic style, which itself was pretty nice back in 1993, and just makes it all a bit nicer.  There’s a level of detail to character design and animation that puts the game up there with some of the SNK classics like Metal Slug and Shock Troopers. 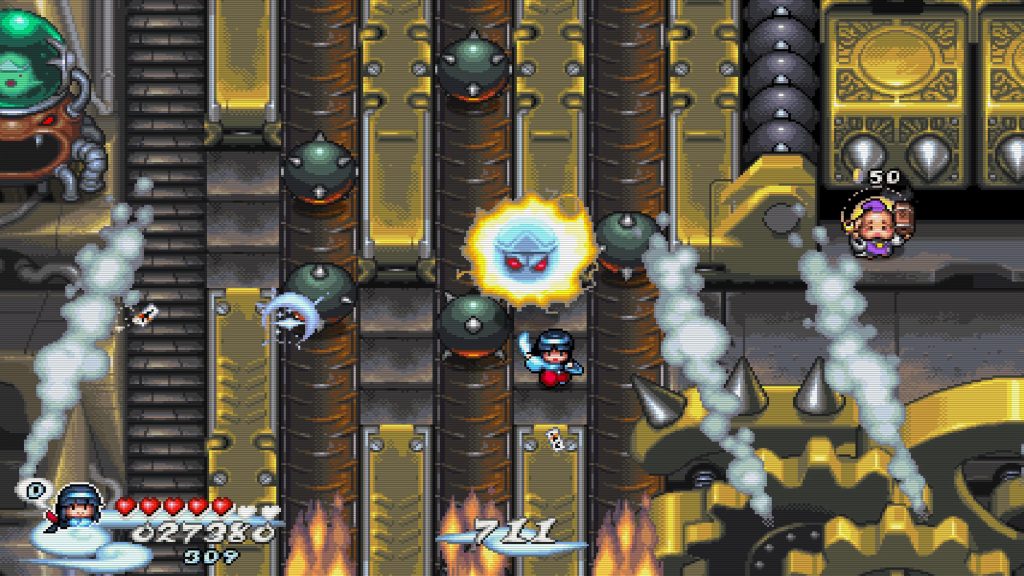 Pocky & Rocky Reshrined might not be for everyone.  Fans of run-and-gun shoot ’em ups should be happy with this and of course if you enjoyed the original game, you’ll be happy too.  It might not suit casual players (and it might attract a few of them thanks to its cutesy aesthetic) but if you knuckle down, you should be able to see everything the game has to offer.  And, if you can complete the story mode, it unlocks a free mode that has an off-line co-op option too.  We’re not sure why co-op is locked down like that but at least it is in there.

So, overall this one is a bit of a retro gem, albeit with a couple of faults that hold it back from true greatness.  Patch in a twin-stick option and we’ll be all over that but for now, this is a decent, and unusual, shoot ’em up that’s well worth your time.

Note:  this game is available physically from ININ Games.

Pocky & Rocky Reshrined
8 Overall
Pros
+ Respectful to the source material
+ Good set pieces
+ Decent graphical upgrade
+ A good level of challenge
Cons
- Is crying out for twin-stick controls
- Might be too tough for some
- Cute aesthetic might not be for everyone
Summary
Pocky & Rocky Reshrined is a tasteful but ambitious remix of a SNES favourite that should appeal to shoot 'em up fans and retro gamers generally. It might be a bit too tough for casual players though.