Drunken Fist 2: Zombie Hangover is the latest bite-sized effort from our pals at eastasiasoft. As is becoming increasingly familiar, what we’ve got here is a seemingly slight effort, though with more polish than the itch.io stuff punted out by Ratalaika. It’s a sequel to Drunken Fist, oddly enough. That came out in late 2020 and somehow passed us by altogether.

Just like it’s predecessor, Drunken Fist 2 is a physics based brawler. The protagonist of the piece looks a bit like a googly eyed version of Billy  Butcher from The Boys, perhaps that’s deliberate. He awakes from a month long bender in his trailer to find, apropos of nothing, that there’s been a zombie apocalypse. 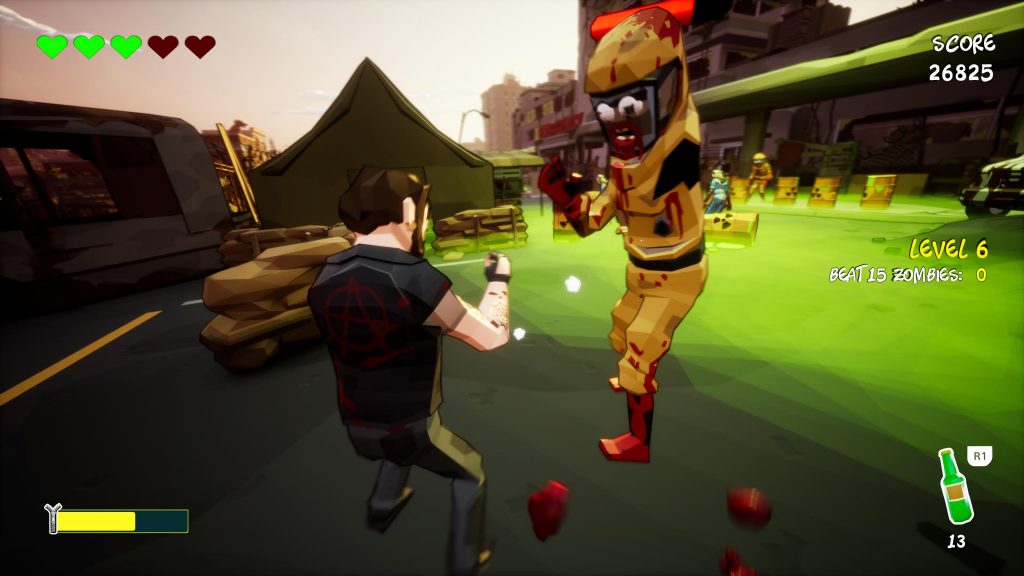 As the title suggests, Drunken Fist 2 has you brawling against zombies while hugely hungover. Though not so much hungover as still massively drunk from the night before. You’re not so much walking as lurching from one fight to another. This game does a fair job of depicting how uncoordinated you are after a skinfull, put it that way. Although we’re not the ones getting into fights, more shepherding our even drunker mates into taxis. The flipside is hair of the dog is your health recovery is with

at which point you chug a bottle of beer. These are found liberally scattered among the stages of the game and prove invaluable.

In the early stages you’ll be facing low-threat, generally low aggression walkers who’ll you’ll easily dispatch with a punch with

or a kick with

. One thing that remains constant is your need to pee. Holding down

gives you temporary relief and additionally leaves a glutinous obstacle that zombies will slip on. 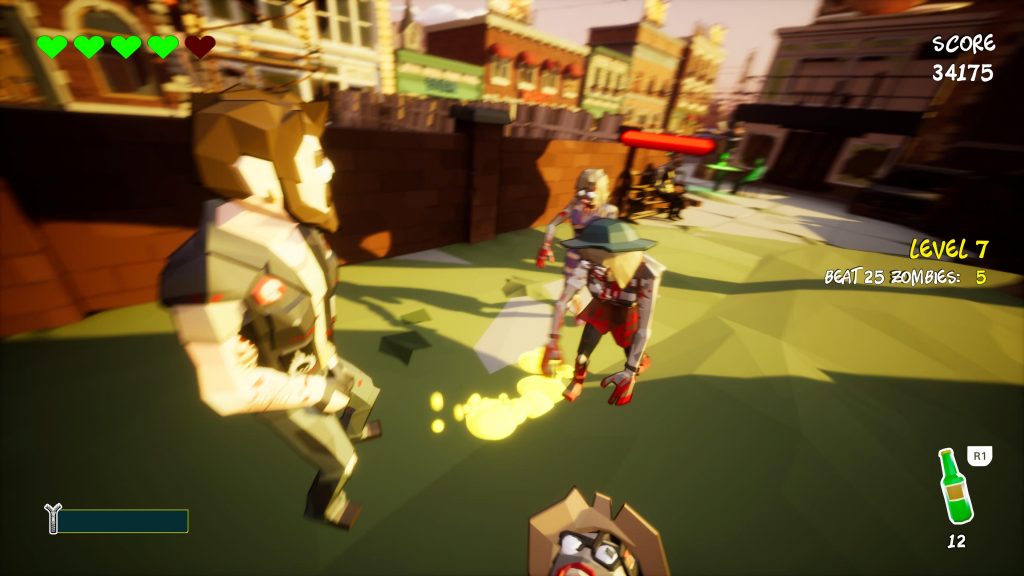 This being an eastasiasoft joint means you’ll unlock trophies like they’re confetti, the last to unlock likely being from having had twenty zombies slip on your piss. Practically this means you’ll end up funnelling a bunch of zombies into a narrow aperture where they’ve nowhere to go but Slippy Pissville.  A legsweep with

helps too, but you run the risk of falling over into the bargain. It’s OK when you do it in earlier levels, but when you’ve faster moving armoured zombies hankering for you, it all gets a bit fraught.

Talking of fraught, when things get a bit too much you can jump backwards with

, though due to your being somewhat inebriated it isn’t a great deal of use when you’re facing a larger crowd. When they’re also packing heat and shooting you into the bargain, it’s all too easy to be overwhelmed. 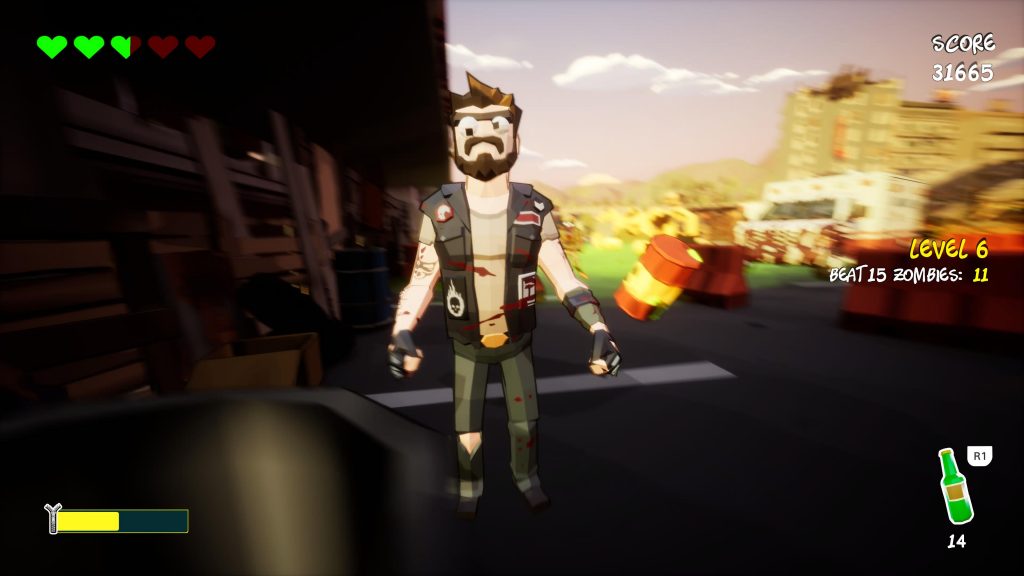 That starts to happen around level seven or eight and you’ll find yourself facing AK47 wielding zombie pricks who’ll take you out quicker than Paddy McGuinness in his shit love lift. By this point though, you’ll likely have unlocked all the trophies and any goodwill that Drunken Fist 2 had at the outset has probably gone.

Any impetus to continue is gone as you’ll struggle to get past the melee weapon wielding enemies and those with firearms, especially since you’re only able to pick up weapons at predetermined intervals, rather than when you see a gun lying at your feet. 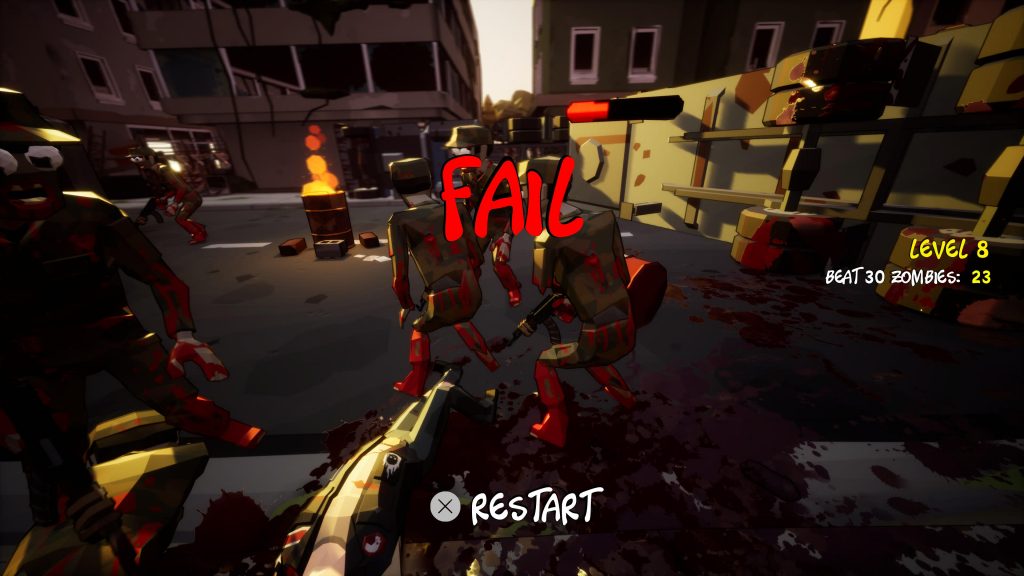 In conclusion then, Drunken Fist 2: Zombie Hangover is a twenty McNuggets box of a game. Fun while you’re playing it, but when you’ve done you’ll want something more substantial to play after. It’s OK, but a daft novelty. That’s fine though. We get the impression the dev knocked this up for a laff and it’s probably fun if you’re a streamer and want to amuse yourself and your audience for a half hour. Anyone else, enjoy the easy double platinum trophy and enjoy Zombie Fist 2 while it lasts, which isn’t massively long.

Drunken Fist 2: Zombie Hangover
6 Overall
Pros
+ Does a fair job of depicting how uncoordinated you are while massively drunk
+ Fun enough while it lasts
+ Double dip platinum in an hour if you're in a hurry

Cons
- The novelty doesn't hang around particularly long here
- Gun wielding zombies are pricks when you've only fists
- Once you get to later levels you'll wish for the ability to pick up fallen enemy weapons
Summary
Drunken Fist 2: Zombie Hangover is a bite-sized novelty which is fun enough while it lasts. If you try to persevere too far you'll be the one bringing your fists to a gunfight and finding yourself coming off worse most of the time.