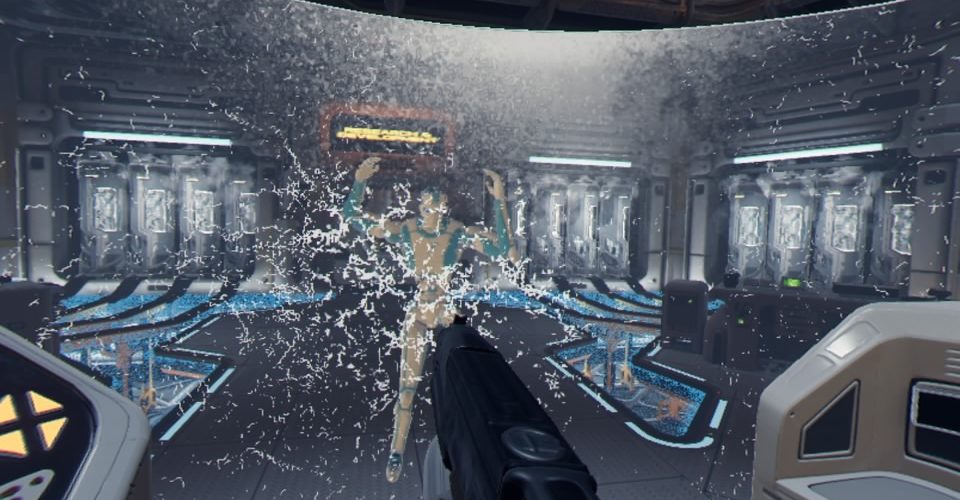 One of the early VR experiences on PC, Raw Data was incredibly well received and now it’s officially released and also landed on PSVR. Shooting galleries are ten a penny in virtual reality but thankfully this one is different. 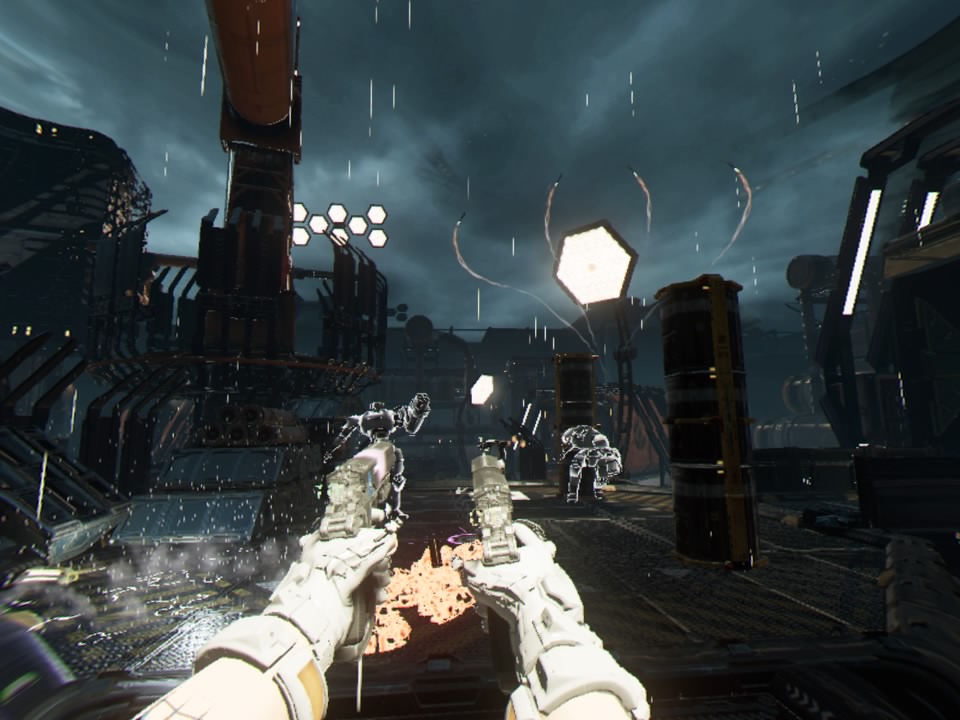 The story sets you in a dystopian future trying to infiltrate the Eden Corporation that runs the world, ‘helping’ the population. This will lead you through ten stages that take you up through Eden Tower, where you and the voices in your head, Angel and Simon, will make discoveries that will add new meaning to the mission. The story is fine, but the characters do go on a lot.

Obviously you can just ignore them and move on but if you’re wanting to follow the story then you’ll be stood around waiting for conversations to finish, with many overly long pauses in the dialogue giving you false hope that everyone’s done. Not game ruining, as I said you can just carry on regardless but a more elegant method of story telling would have been appreciated.

Before you go into a mission you can do some basic training to get used to the controls and characters you can select. It’s a good idea too as Raw Data isn’t like other shooting galleries like Until Dawn: Rush of Blood or VR Invaders in that you can just sit there and shoot things as they appear in front of you, in Raw Data you actually *gasp* get to move. There are two methods of movement, one being teleport and the other allowing you to move forwards and backwards based on the direction you’re looking in or where your hand is pointed. I stuck with teleporting for most of the game as the controls are pretty complicated for movement but you can strafe in the free movement mode which will allow you to pull off some much needed dodges if you can get your head around it.

Even the teleport method takes some getting used to as you’re required to press the cross and circle buttons on your main hand Move controller (two are required to play) to turn left and right, whilst the teleportation is mapped to the Move button on your off hand. Initially I wanted all the movement on my left hand whilst mostly shooting with my right but I quite quickly got the hang of it and as I experimented with different characters my right hand was not the only one doing the attacking any more. 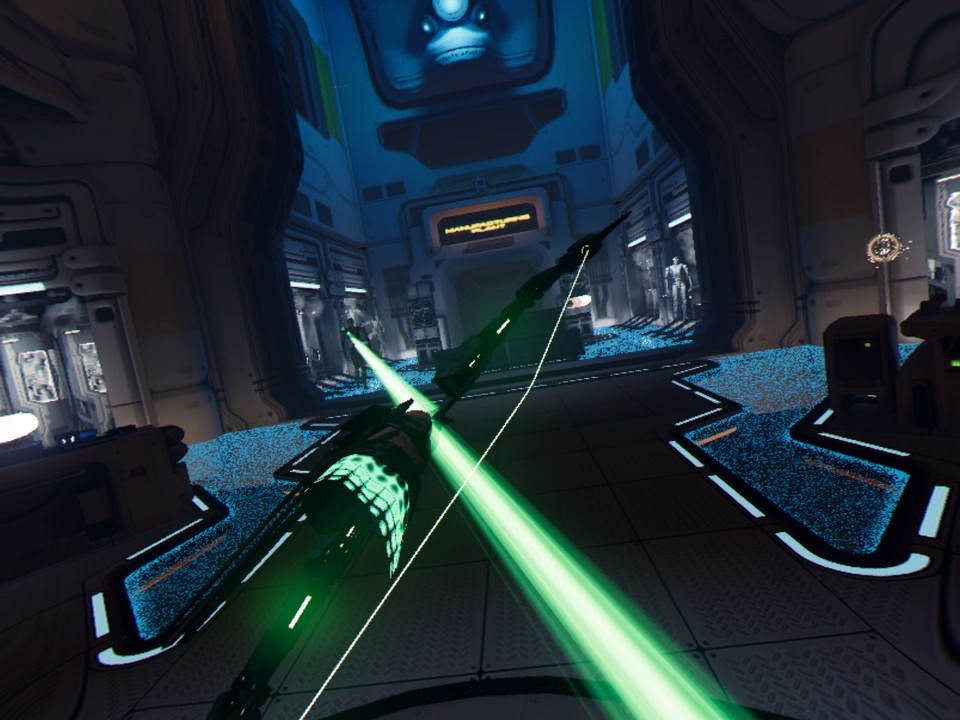 There are four characters to choose from, each with a different weapon. Bishop is a pistol user, Boss is a shotgun wielder, Saija uses a katana whilst Elder has a bow and arrow. Each weapon has their own intricacies. The pistol requires reloading after fifteen shots (or earlier if you prefer) which means you need to reach down to your hip with you off hand and bring the clip up to your gun. The shogun requires pumping between every shot, again with your off hand. The katana is just that and the bow and arrow doesn’t require you to grab an arrow, one just manifests as you pull back the string but if you hold it there long enough it become more powerful.

Each also has special abilities, with new ones unlocking as you complete levels with them. Bishop can forgo reloading with a clip and simply bring the gun to his holster to reload which is extra helpful when you unlock the dual wield ability. Boss can fire grenades, Saija can throw her sword like a boomerang and Elder can create a damaging area of effect of the floor. There are plenty more abilities too, either enhancing current abilities or brand new ones and you can replay levels with these skills to improve your score or on higher difficulties. Super moves run on a generous cooldown and allow you to put out major damage for a brief time.

All characters can also place structures around the map like a tower defence game, with more unlocking as you progress. The basic laser turret has good range but the bullet takes a while to travel, a plasma turret is short range but pumps out a constant stream of hot death, whilst the shield creates an orb that blocks projectiles.

Even though you can move around you are still basically confined to an arena. They come in all sorts of different shapes and sizes but, apart from the first level, you’ll be protecting a hacking station from all the evil robots that come to attack you. If you die then you respawn relatively quickly but if the hack is destroyed then you have to start the whole level over again, and they aren’t that short. Not overly long either but I certainly started to feel it in my back with all the twisting and ducking with my arms out in front of me after a few levels. 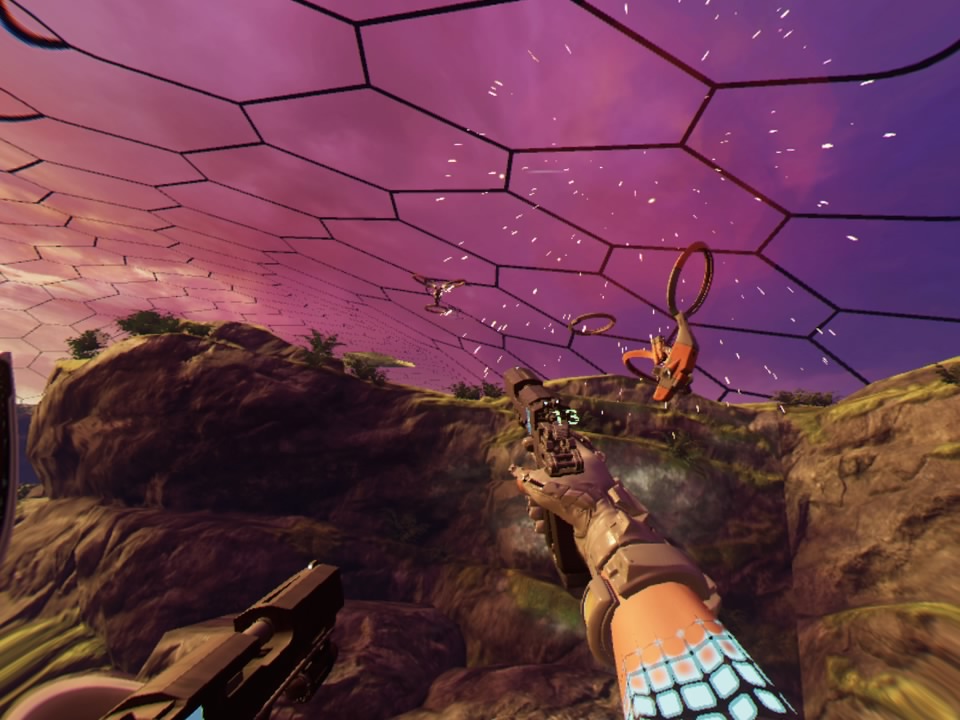 The enemies themselves come in multiple varieties but you will have seen them all long before the end of the game, which is a shame. Your basic ones will simply walk up to you and try to punch you, others will have guns, there are flying drones and bigger robots which shoot lasers or fire rockets take more damage. The environments can get a bit samey though there are one of two that are very different, it’s just unfortunate that that isn’t maintained throughout.

Technically I didn’t have too many problems with my VR set up. You need a decent amount of room around you with a full range of motion with your arms and on the odd occasion my right hand would bend in odd directions (in game) which would effect my aim but as long as you can stay in relatively the same position then you’ll be okay. In the heat of battle you sometimes forget that you must turn with buttons and not simply move yourself but a grid on the floor shows you which way you should be facing at any time and arrows appear if you twist too far for the system to track, reminding you of your place. It’s not perfect but works very well within the confines of the hardware and shows that simple tech demo style shooting galleries aren’t the only way to go.

Visually things are a little disappointing with very blocky visuals which doesn’t really trouble your aim but makes any in game writing pretty much illegible after a certain distance. As things get further away their frame rate noticeably drops and and the draw distance on certain objects, like explosions, is unfortunately shallow. One of the early tutorials asks you to move to the ‘spinning E’ and I couldn’t see it, it was only when I moved a little that it appeared because the position I was in was just out of its drawing in range. Again you could probably blame the hardware but I’ve played better looking PSVR games. 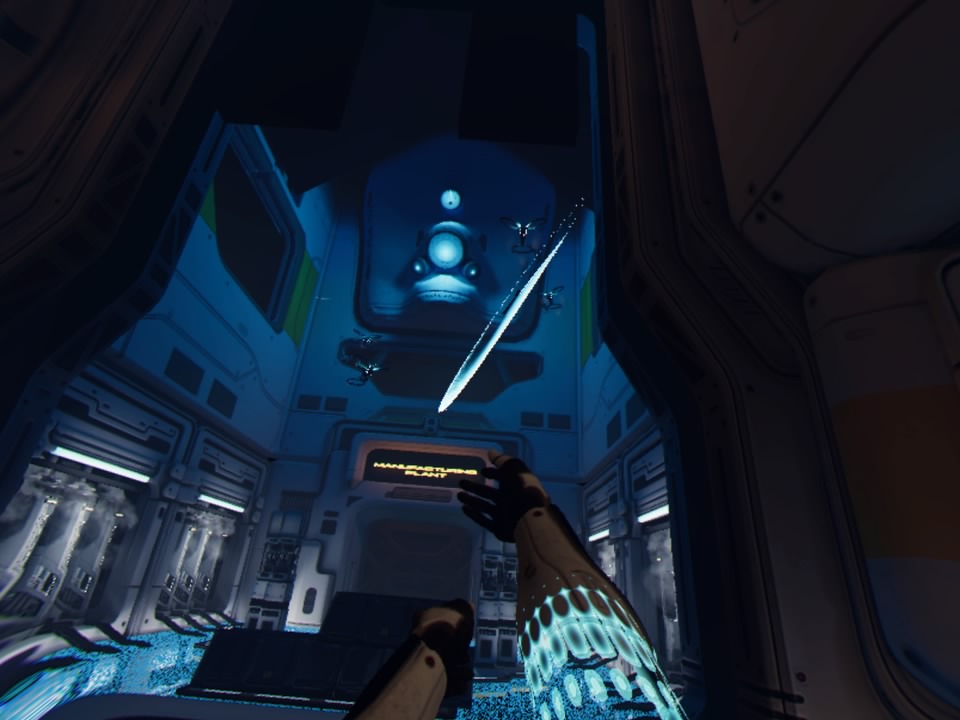 You can’t fault Raw Data for showing the way for other games however. No longer do you have to be sat/stood in one place or funnelled down a straight corridor, never turning around. Full range of movement is possible and you can actually be pretty nimble when you have to be so moving around at speed isn’t a problem. The technical side lets things down a bit but it’s hard to tell where the blame lies there and the lack of enemy variety, similar looking locations and physical demands mean it’s probably not a game you want to play for too long in one sitting. Still, if you enjoy shooting things in VR, and judging by the amount of them most people do, then Raw Data offers something slightly different which means it’ll hold your attention for that little bit longer.

Raw Data
7 Overall
Pros
+ More to it than your usual shooting gallery
+ Four characters play very differently
+ Ability unlocks encourage experimentation
Cons
- Enemy and location variety is a little lacking
- Characters can go on a bit
- Let down a little technically
Summary
Raw Data offers more than your usual shooting gallery VR game. The ability to move around makes the game feel far more substantial, with the four different characters and their abilities offering plenty of gameplay nuance. The lack of enemy and location variety is a shame, as are the technical limitations brought on by the hardware but if you're a fan of shooting stuff in VR then it's definitely worth checking out.