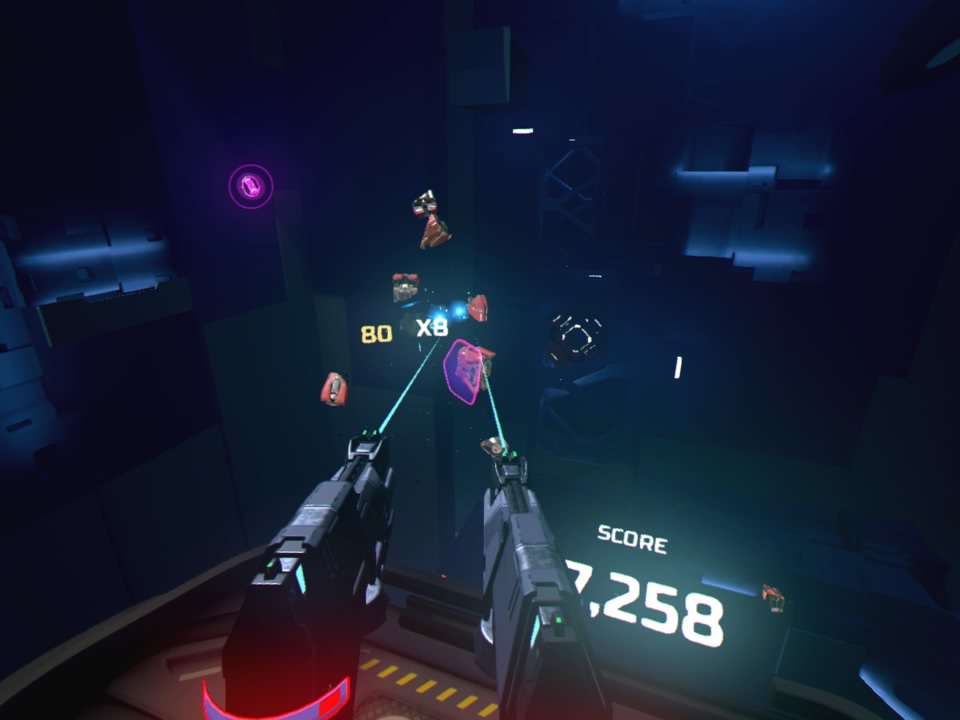 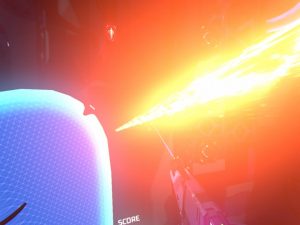 The PlayStation 4 is getting its fair share of VR, first person shooters, catching up with what is a very popular genre on the PC. VR Invaders is one of the most recent ones but does it stand out from the crowd?

There is actually a story throughout the eight chapters about you being a hacker going into VR to take out viruses but you’d be better served turning it off which you can do easily through a toggle on the main menu. The story adds nothing to the experience and the characters, especially the main, are pretty irritating. There are story sections before each level and the characters will continue to chat as you play too. Treat this as an arcade game and you’ll enjoy it more.

From the main menu you can choose to enter the eight levels (as you progress and unlock them) or a Survival or Free Range mode. The basics are the same for each though. You’re stood on a platform with a gun in one hand and a shield in the other, using the Move controllers. Your default gun is a rapid fire pistol though new guns that last for a limited time appear as you play, from a machine pistol, to a laser, to a shotgun. Your shield can be used to block enemy bullets, though bigger bullets will disable it for a short time. Pressing the trigger on your shield hand will activate a short period of slow motion which will allow you to line up shots or quickly survey the area.

Enemies come in waves and patterns much like an old shooter like Galaga, though debris from other enemies and the scenery can interact with and alter their patterns. There is a variety to the enemy design which requires a different approach depending on what you’re facing. Some are very basic but swarm in packs, some have shields covering their flanks, some are fully shielded which require patience, some have to be shot in multiple areas to take down. 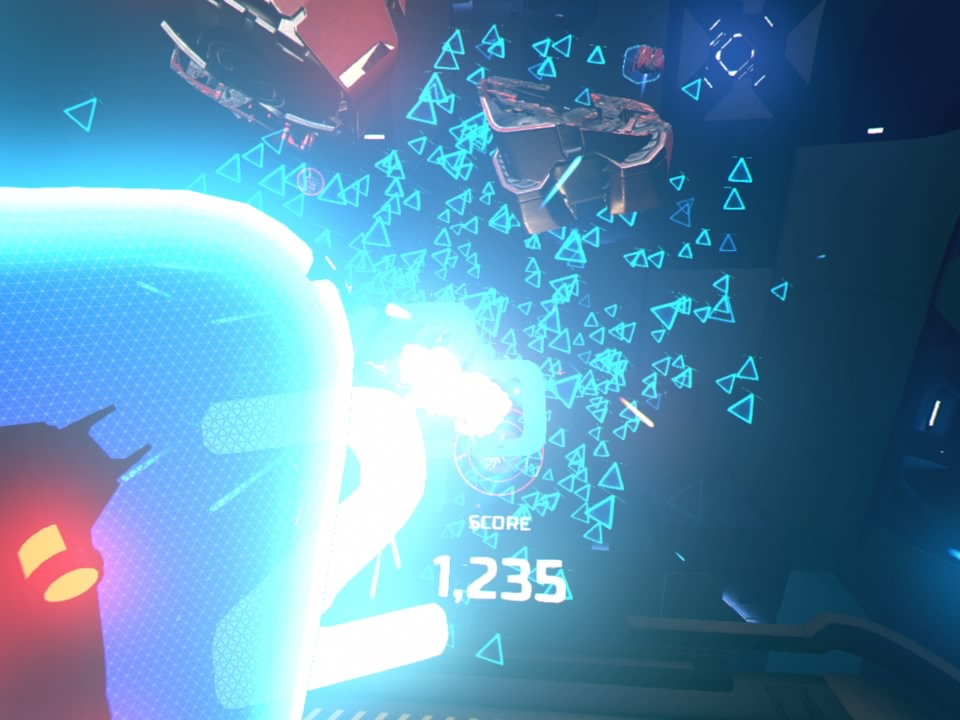 The enemy will fly around in front of you though there is a wall behind you so they never approach from the rear. There’s probably just under 180 degrees you have to worry about, plus above and slightly below (you’re stood on a floor so can’t be shot from directly beneath). Keeping track of all the enemies can be difficult but the game offers audio and visual cues to help protect yourself. You can hear shots as they’re fired, and a little marker appears in the direction it’s coming from. Similarly the homing bots which just slowly move towards you and explode have their own beeping sound. Taking everything in and processing all this information takes time to learn but I have certainly improved over my time playing.

At the end of each level is a boss encounter which can vary from a simple bullet sponge, to an enemy with moving weak points, to one that sweeps lasers across the screen. They’re certainly interesting to engage but can sometimes feel like a war of attrition once you’ve figured them out. With the lasers you actually have to lean left or right or duck to avoid them which is a fun bit of interactivity.

Surviving is one thing but if you want to get a higher score then you want to engage with the combo system. Killing things in quick succession starts a combo chain which also acts as a multiplier. The window is very small so some intelligent play is required to know where your next kill is coming from to keep the chain going. To aid in this you can shoot enemy bullets to continue the chain which adds a nice amount of risk/reward gameplay. 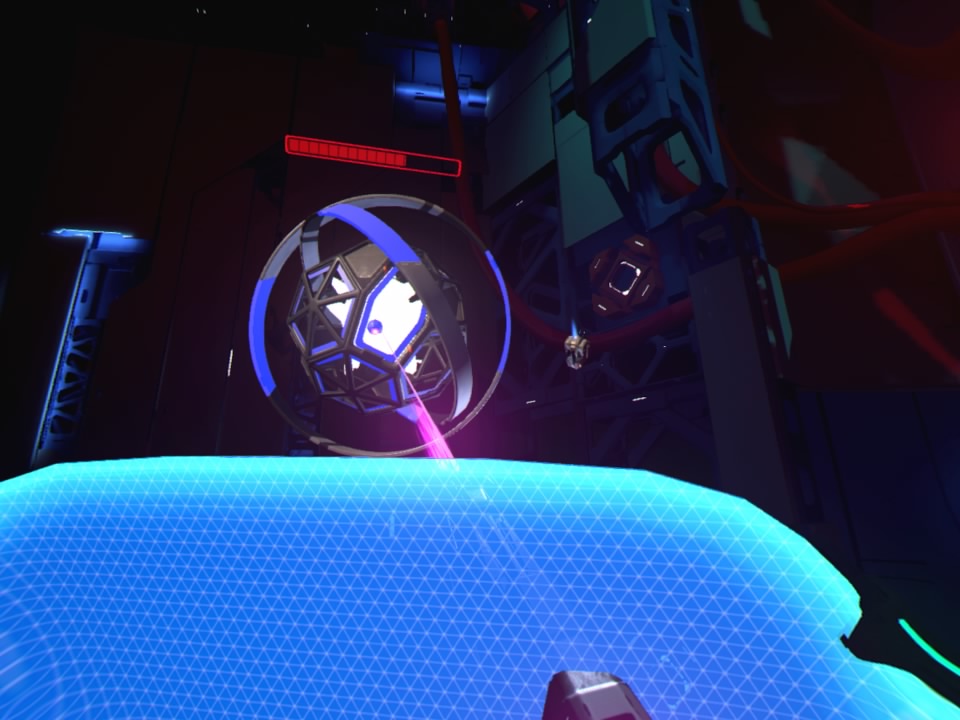 There are three different difficulties which also increase the score values so you’ll want to be playing on the highest difficulty to achieve the highest scores. Obviously turning up the difficulty makes enemies more aggressive and bullets move quicker and do more damage meaning you have less margin for error. Unfortunately there are no online leaderboards, so unless you use the screenshot feature then you’re not going to be competing with friends, or anybody, other than yourself which lessens the appeal.

Survival mode has you surviving waves of enemies without any health pick ups whilst Free Range mode only has the homing robots so you don’t have to worry about enemy bullets (you’re actually given two guns in this mode as the shield is unnecessary) but as time goes on more and more spawn and you will become overwhelmed. 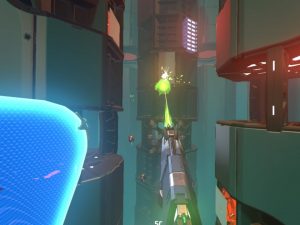 The story mode will only take you around an hour to get through assuming you don’t run into too much trouble and although the Survival and Free Range modes offer a slight diversion, upping the difficulty and trying to beat your own scores is where most of your game time is going to come from. How invested in that you become will be down to you.

The lack of online competition has meant that although I’ve enjoyed my time with VR Invaders as it’s a well made game, the shooting feels good and the enemies and destructible environments look great in the headset, I’ve got everything I’m going to get out of it. Fun for a while but not particularly memorable or long lasting.