It seems like anything will find its way into the Playstation store. I’m not complaining but I did not expect to review a re-release of a game that first saw daylight in 2012 on mobile platforms. Ravensword: Shadowlands is now on consoles and it seems Crescent Moon Games have opted for a port rather than a more explicitly updated effort. It isn’t pretty or clever but I did find myself enjoying it. 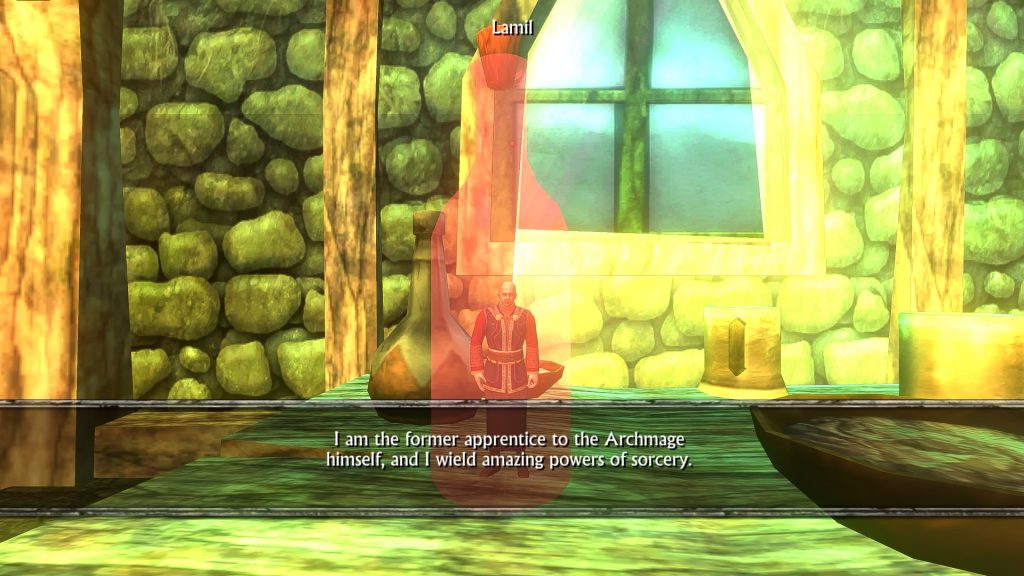 Ravensword: Shadowlands’ story is a basic enough tale. As our hero, you begin as a lone survivor of a bloody battle against the invading Dark Elves. The kingdom of Tyreas is in trouble with the demonic Ul Thok looking for control. You’re chosen as the person to stop this and need to find the titular Ravensword to turn the tide of war. The opening battle does give you the opportunity to create your character but mine spent most of his time clad in armour.

There rest of the narrative is slender and serves mostly to give the world just a tiny bit of colour. Characters from previous games in the series turn up but, mostly, people exist to give you quests rather than backstory. I don’t mind it but it offers little in the way of intrigue. If this is your first entry to the series, the intro sets the scene up well enough.

As an RPG, Ravensword: Shadowlands isn’t the deepest. Melee combat is kept simple with swords, maces and crossbows making up most of your arsenal. It’s real-time combat and whilst your weaponry has a wide damage range, you can reliably whittle enemies down without worrying too much about fate dulling your attacks. 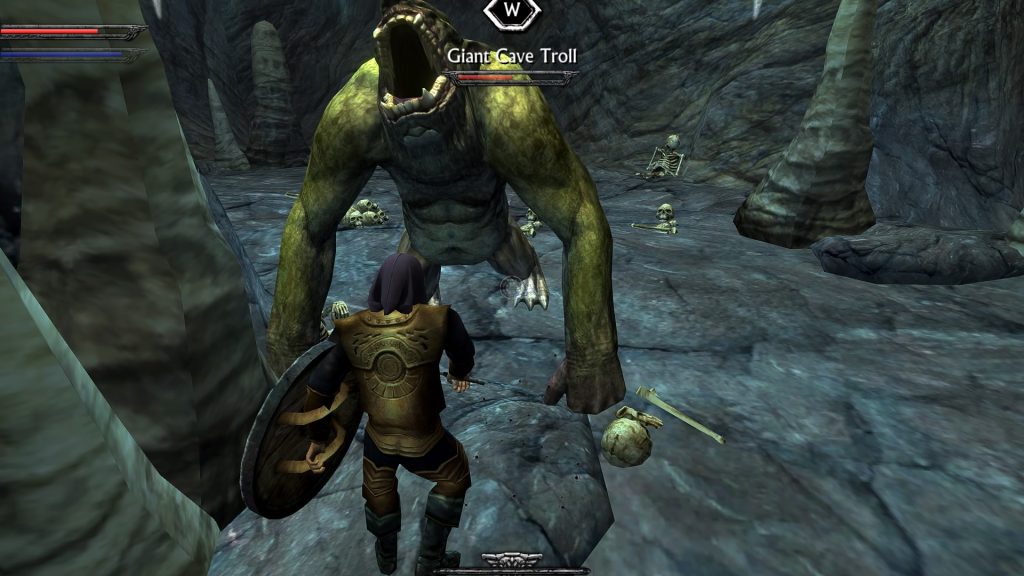 It controls well. You can hold weapons in your right hand and shields in your left and the controller’s trigger correspond to those hands. Shields and armour have set defensive values and it appears bows can only substitute a main weapon, rather than exist as an off-hand option. It’s a shame that versatility is missing but there’s still plenty of ways to mix and match your gear. You have a jump button which does come in handy for some easy platforming sections. There’s also a dodge button which allows you to sidestep hits. I ended up cowering behind my shield but it’s nice to have those evasive manoeuvres at your disposal.

Controls feel reliable and combat is straight-forward. It didn’t cause me much bother during my playthrough although mobs pose a greater threat than solitary encounters. I tried to keep fights one-on-one wherever possible. I did find enemy AI to be a predictable and easy enough to manipulate. Most of the shields felt reliable and, as long as you weren’t knocked down, you could tank hits. I should note I played it on the default difficulty but there’s plenty of room for increased challenge in the settings.

Things do get tougher as you go but the levelling system helps you keep pace. Your skills increase the more actions you perform. If you block a lot, your block stat goes up. If you attempt to pick locks, that will increase also. It’s nice not to worry so much about experience, although that also allows you to boost your core attributes and pick a talent. It’s not an experience heavy on grind and you can max out your talent tree with ease. 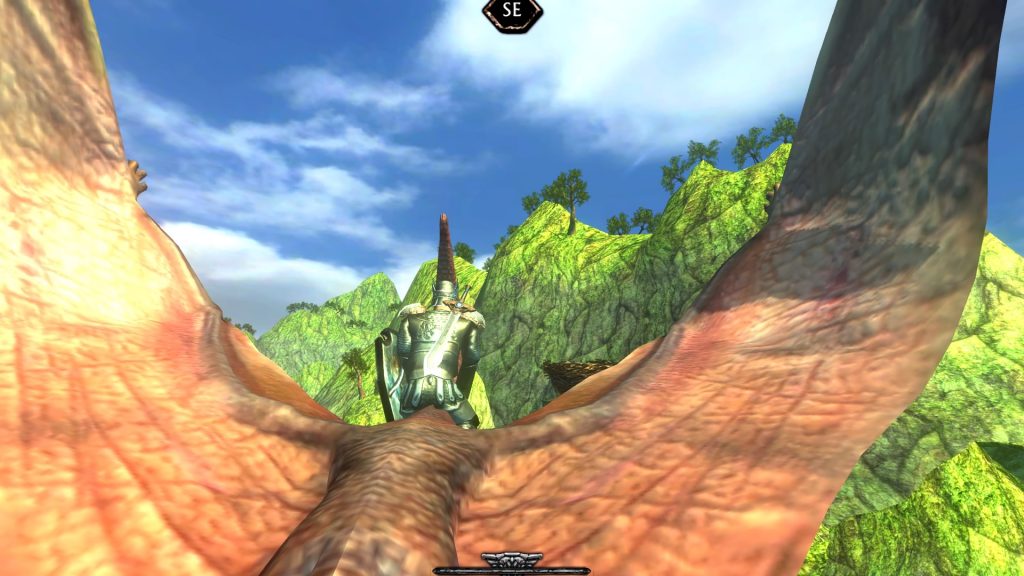 It all feels rather leisurely and uncomplicated. Enemies are placed in position and can be circumvented. The moments where I was having trouble, I found a change in gear made all the difference. There’s plenty of it to be found in chests but they can also be bought. Gold initially comes in a trickle but, as you get deeper in the talent tree, the bonuses you earn make the more expensive stuff within your grasp. Trading brings plenty of money to the table. Quests pay well and there’s about a dozen side quests you can pursue.

Away from the main story, the side quests do show a little variation. Some require fetching items, some task you with clearing an area and others require you to find and escort a person out of a dungeon. Much like the combat, there’s not much inventiveness on display but, as a disposable experience, I found the quests were decent and rewarded you well.

One thing you can’t escape is how low-budget the game looks and sounds. Very little polish has been applied to the original release. Texture work and geometry is basic. Movement and animation feels occasionally clunky. Enemies share the same grunts and growls and have a tendency to pop into existence and get caught behind objects. 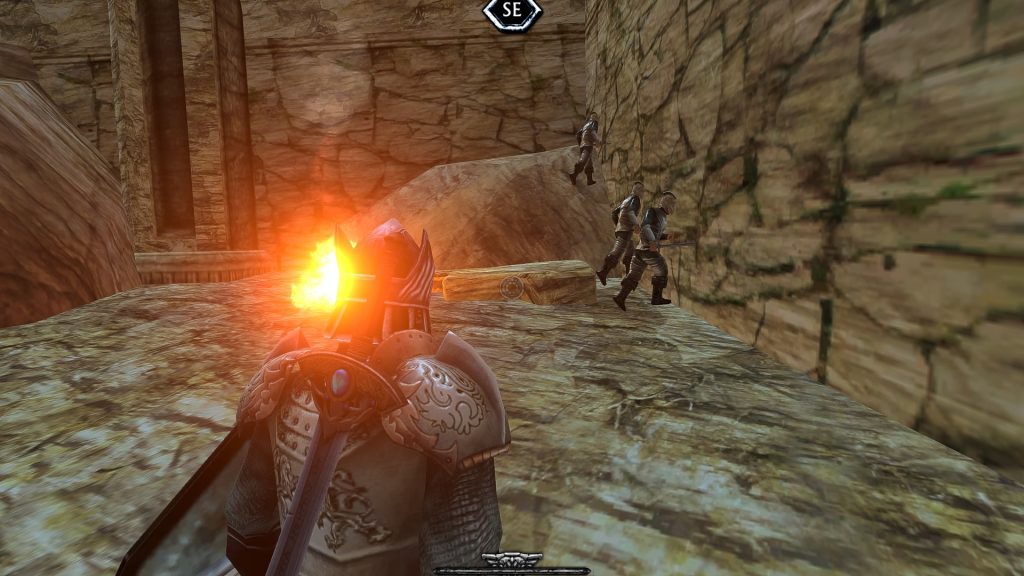 To the game’s credit, there is a smattering of voiced lines for some of the major characters. The acting is decent and I did really enjoy the soundtrack. The game would regularly crash but never at a point where I lost progress. In addition, the game keeps track of several saves that are minutes apart. Should you need to, you can roll back to an earlier save. Helpful if you ever find yourself in a bind.

Ravensword: Shadowlands feels shallow and disposable but it got plenty of time from me. It looks even further out of place in 2021 and on console but there’s a personality to what is a very low-budget affair. The soundtrack caught me by surprise with how nice it sounded and, despite the technical issues, there’s some conveniences on display that don’t push you back after an unwanted crash.

Ravensword: Shadowlands
6 Overall
Pros
+ A brisk, enjoyable adventure.
+ Combat is simple and easy to grasp.
+ Character building fits around your play-style well.
+ A delightful soundtrack.
Cons
- Visually outdated.
- Technically unpolished with crashes happening often.
- The main quest isn't especially long or compelling.
- Enemies can be occasionally thick and combat is not tuned to handle groups.
Summary
Honestly, I found parts of Ravensword: Shadowlands charming. It's a game that was low-budget almost a decade ago but the smaller scope resulted in a simple RPG I found surprisingly enjoyable. Technically, it is unpolished and has a tendency to break but playing through it didn't feel like an obligation. The combat lacks depth and the main quest can feel bland. Luckily the uncomplicated nature of it all made this feel rather brisk to play.