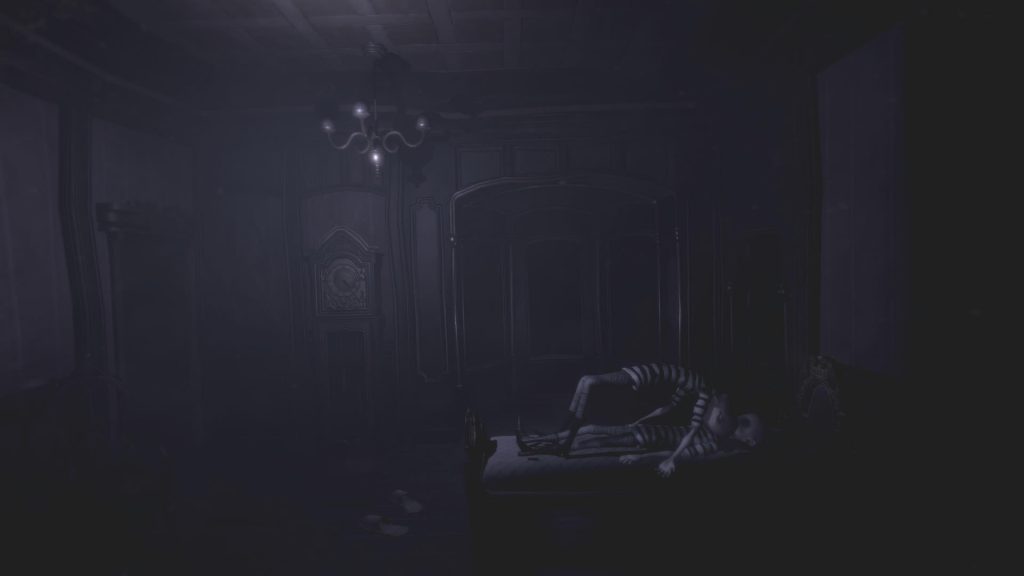 Of all the worlds that can be conveyed in the medium of video games, the realm of dreams is by far one of the most interesting and varied that comes to mind. We all have them, some are whimsically fun, some are downright horrifying and that’s what makes them such ripe territory for exploration in an interactive medium. Nights Into Dreams, Kirby’s Dreamworld and Psychonauts come to mind as excellent portrayals of the whimsical, filled with surreal imagery and casts of colourful characters to meet and play with. However, when it comes to the nightmare side, there does seem to be a bit of a lack of games that are dedicated to this state.

This all comes from the idea that horror needs to be based in some sort of reality, with known locations being menaced by supernatural or slasher style “other” threats taking precedent over the surreal, unrecognisable places that seem unnatural to begin with. For these, we have fewer examples to work with, things like Alice: Madness Returns and the nightmarish warped locations of Silent Hill come to mind, but even one of those takes place in a realistic locale before going to pot. 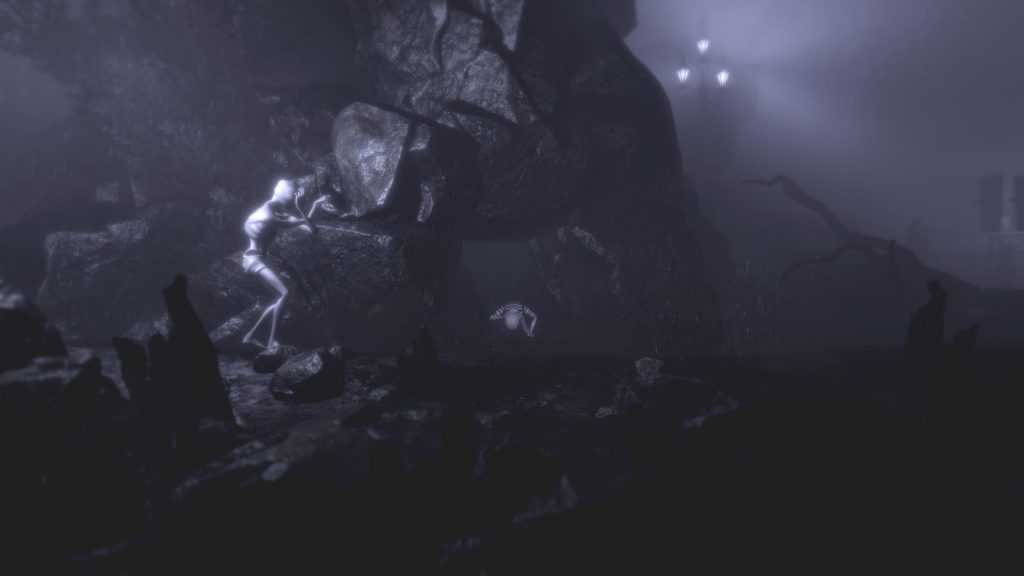 Darq is one of the few that I can think of that takes place in a nightmare setting throughout, with the key aim of the game being to guide Lloyd along a series of puzzles and enemy encounters to escape the nightmare and finally awaken from it. As Lloyd, it is immediately apparent that something is off when starting the game, as he finds himself stuck in a room with no means of exit or escape other than by sleeping on the bed. After doing this, his dream self leaves his body and enters one of the seven chapters that make up the monochrome, gaunt world of Darq.

As a self-aware dreamer, Lloyd is capable of a feat that allows him to traverse through each stage, such as being able to walk up walls to reach new areas and approach puzzles from a different elevation or viewpoint. This gameplay element opens a few possibilities that helps accentuate the fact that this is all taking place in a warped version of reality, such as a chapter that takes place in a subway station, with train obstacles running vertically, horizontally and upside down depending on which axis Lloyd is running along. Some objects are also affected by this shift in gravity as a room rotates, allowing large props to fall through walls to open new pathways. 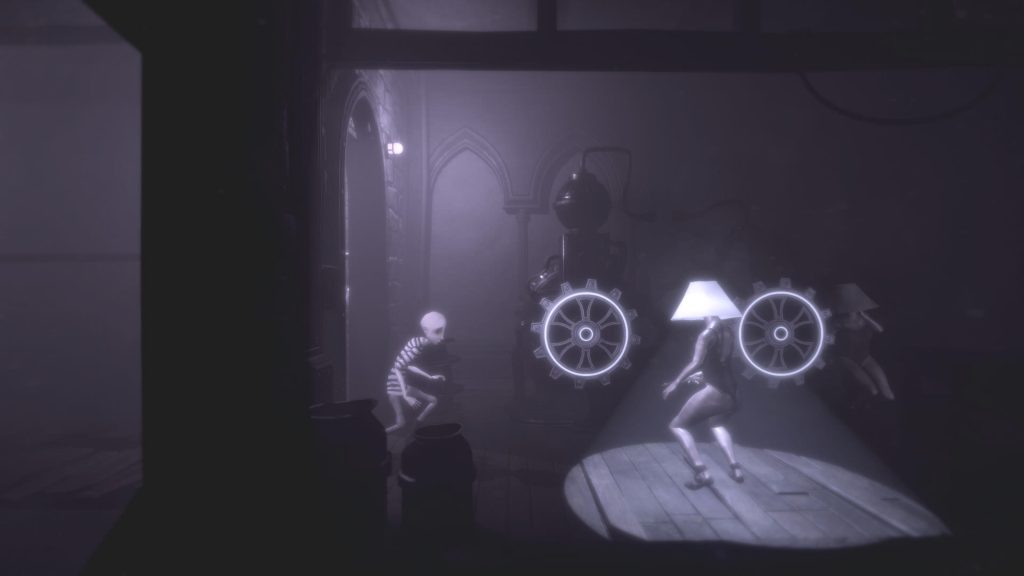 For the most part, this is a very smart and well used mechanic that doesn’t feel at all daunting to use or learn as you progress. Most often, any puzzle that you’re not sure on can simply be resolved by walking further through each stage and exploring a corridor from a different direction. However, as a result of being stuck on a limited 2D plane (with minimal shifts in 3D) it can sometimes feel that this is a bit too easy, as puzzles become less a test of skill or logic and instead, being more of a matter of time until the puzzles are solved. This may or may not be a problem for you, depending on what you are wanting from an atmospheric horror puzzle title.

For me, I appreciated the lack of puzzle shaped barriers in Darq, it allowed me to enjoy the atmosphere and entirely mute plotline a lot more. Likewise, the horror elements didn’t stand in the way as much as I would have expected, which is fine for me as the few enemy encounters that do come up would have been tedious to me if they were replicated into a longer run time. 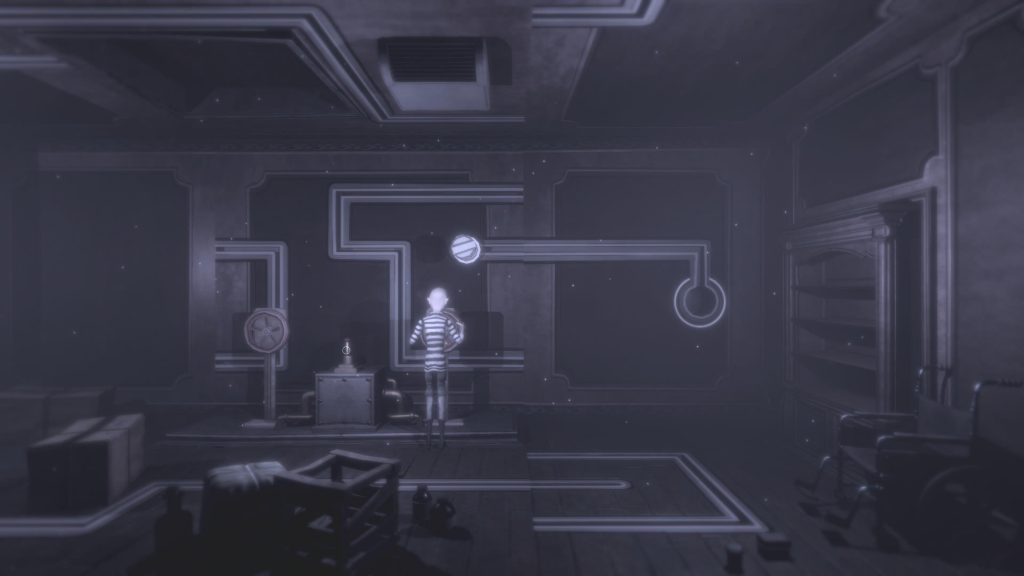 These come in the form of occasional creatures that block your path in one way or another. There is a pale man with his hands over his face that shambles across your path a couple of times during the encounter. Rather than being a horrifying threat though, this creature is quite easy to pass, and just relies on basic stealth moves like tiptoeing and slipping into the shadows while it passes by. While suitably creepy, I would hardly call this a horror element as the creature is more inconvenient as it is just so slow to get by. In one encounter with this creature, I had to go to the area he was patrolling a couple of times, which was more of a nuisance than anything else as all it does is walk and not much else.

There are some escalations that come later though, with one section taking place at a rotating puzzle which takes the main camera and rotates it away from the player view, adding some tension to the puzzle. As the camera pans away, it shows a creature approaching Lloyd from a corridor off screen and the player must complete the puzzle before it reaches Lloyd. This is such an effective moment and the only one that really felt like something out of horror, but again, more of a temporary roadblock than anything more, which is a shame. 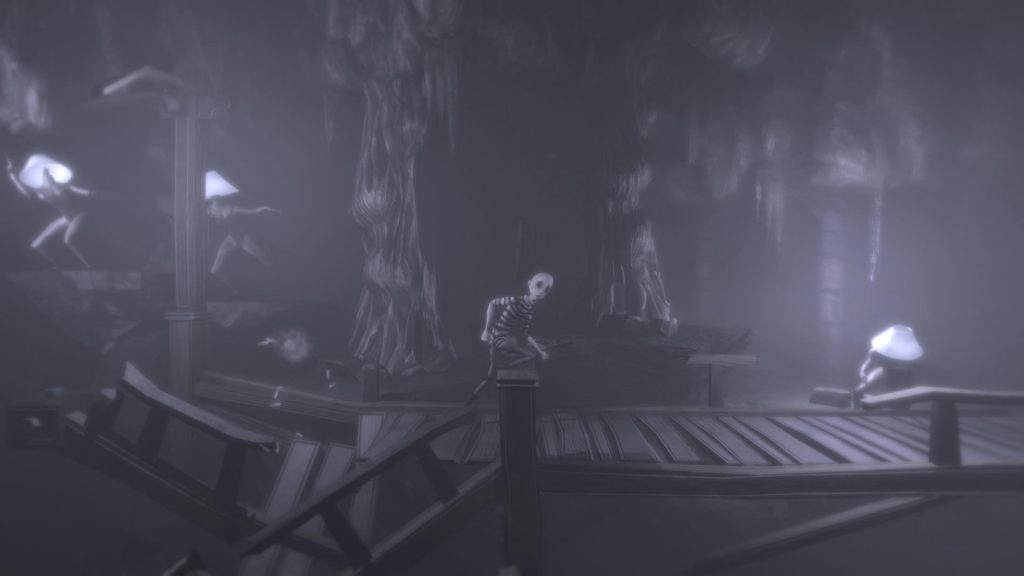 Where Darq truly excels is in its setting and atmosphere. The monochromatic world of Lloyd’s dream and the surrealistic creatures and machinations found within are all imaginative and downright creepy. While keeping to similar visuals throughout, each chapter’s stage has a personality of its own and loosely weaves a narrative throughout the game. It’s a very affective aesthetic and gameplay formula wrapped with puzzles that feel satisfying to beat, if not being overly taxing to do so as judged by the less than two-hour completion time. My only wish is that the nightmare element could have been taken further than it was, as at no point did, I feel that Lloyd was under any real, tangible threat despite there being multiple opportunities in which to make the creatures seem more impactful.

Darq: Complete Edition
7 Overall
Pros
+ Burton-esque gothic visuals that set a moody and atmospheric tone throughout
+ Clever and not overly cryptic puzzles
+ Doesn’t outstay its welcome
Cons
- Doesn’t explain anything, not even the basic controls
- Some may find the game too short
- Could have gone further with the horror elements
Summary
Darq is an incredibly atmospheric, if brief title about being a self-aware dreamer that is stuck in a nightmare. This game oozes spookiness with satisfying puzzles and Tim Burton-esque surrealism, but skimps on the actual horror elements which could have been its Darq’s marquee feature.