Before we get started, let’s address the elephant in the room. Seventy pounds. Or if you’re in the US, seventy dollars. Yes, our price includes 20% VAT, but even taking that into account buying a full priced game, Ratchet & Clank: Rift Apart in this case, is only going to cost you around seventy five dollars including sales tax. As opposed to the equivalent of ninety seven dollars in the UK. Fuck that noise.

This reviewer bought their physical copy with their own hard-earned cash so it’s hard not to feel a tiny bit aggrieved when one of the first dialogues you’ll encounter upon installing is the invite to upgrade your copy to the digital deluxe edition for an extra ten pounds. Thanks, but no. You’ve already clobbered us for the equivalent of a weekly supermarket shop and you want to hit us up for the price of two bottles of reasonable red wine on top? Try fucking off with that. 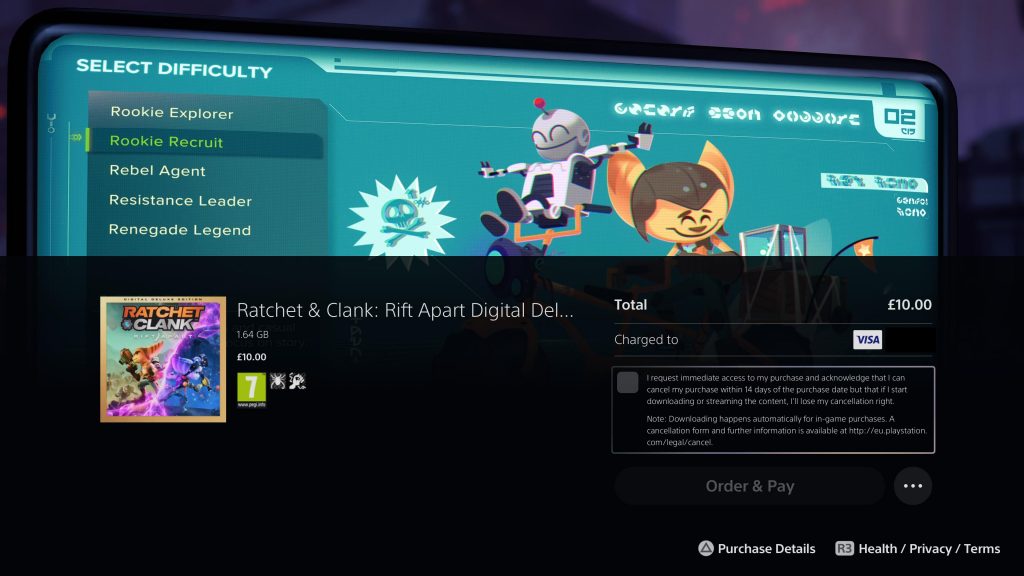 This absurd pricing policy with the lopsided pricing outside America and Japan can’t be sustainable. Yes, Sony are positioning their platform for the tentpole event games, as opposed to the everything on Gamepass from day one on Xbox. But the fact is, this reviewer is the only one of our review crew that’s bothered to pick up Ratchet & Clank: Rift Apart, that speaks volumes. Although if physical sales of less than fifteen thousand copies in Japan in launch week are anything to go by, we’re not the only people swerving the stupid pricing.

Anyway, enough of our grumbling. Ratchet & Clank : Rift Apart is the big firstparty summer release from Sony, by way of developer Insomniac Games, now  a wholly owned SIE Worldwide Studios subsidiary. Like PS5 launch title Spiderman: Miles Morales, Ratchet & Clank: Rift Apart is another visual tour de force. Yes, our screenshots might not be the most inspired, but trust us, it’s at best beautiful and often outright stunning. 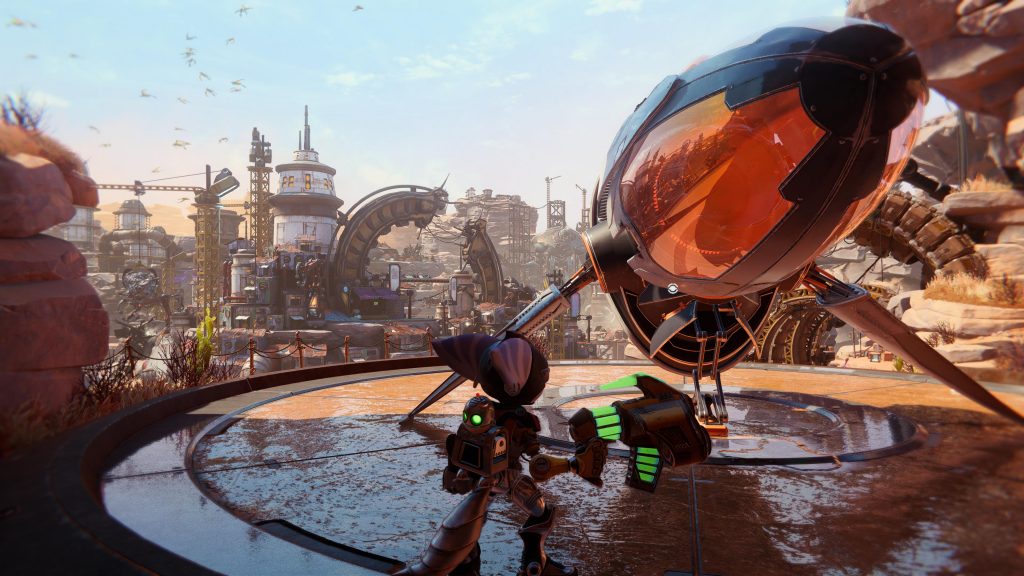 The marketing and cover art make a big thing of there being a female counterpart to Ratchet. She’s named Rivet and due to the titular Rift Apart she’s paired up with Clank, with Ratchet meeting, yes, a female warbot called Kit from the same dimension.

Rivet is voiced by Jennifer Hale (perhaps best known for her depiction of Shepard in the Mass Effect series) and Sony really get their money’s worth when it comes to dialogue. Ratchet and Rivet rarely fight alongside each other, with each level being like a Game of Thrones episode that focusses entirely on the one character, only switching when you reach the end of the level/episode. 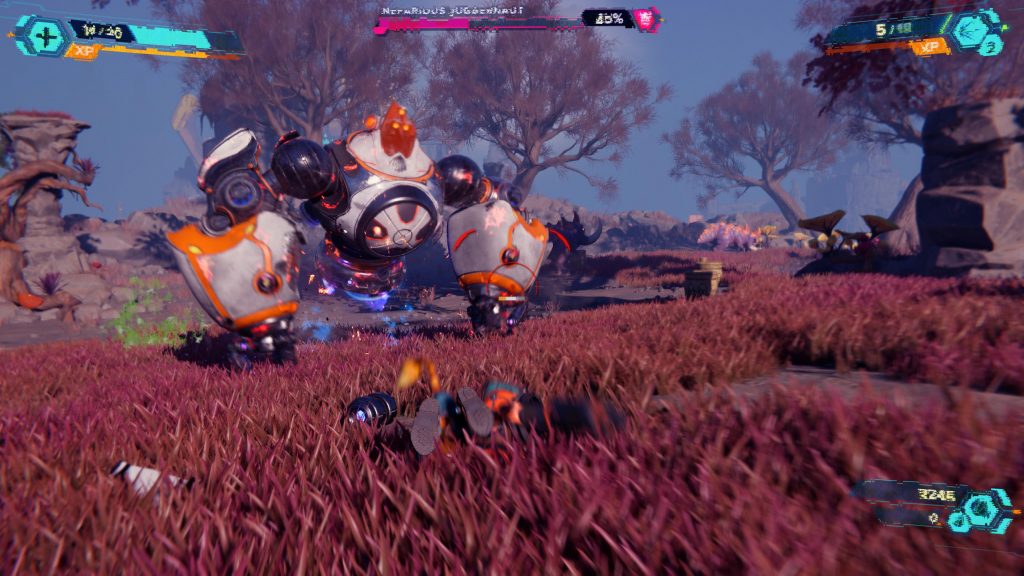 All of the characters love to talk at length, with the generally  stellar voice cast doing their thing. The villains of the piece are voiced by Robin Atkin Downes and Armin Shimerman, known to sci-fi fans as Byron from Babylon 5 and Quark from Deep Space Nine respectively. Unfortunately once we’d clocked Armin’s voice we couldn’t help  but hear him as his Ferengi bartender. Another highlight is the Mort NPCs who all speak with a thick Wisconsin accent. They’re all indistinguishable from one another, all going by the name Mort.

Mechanically, it isn’t too dissimilar to the last Ratchet & Clank game on PS4 that Sony dutifully released for free via their Days of Play promotion. That being a planet with a main objective and a secondary objective into the bargain. Rift Apart follows that template fairly closely, almost without exception. 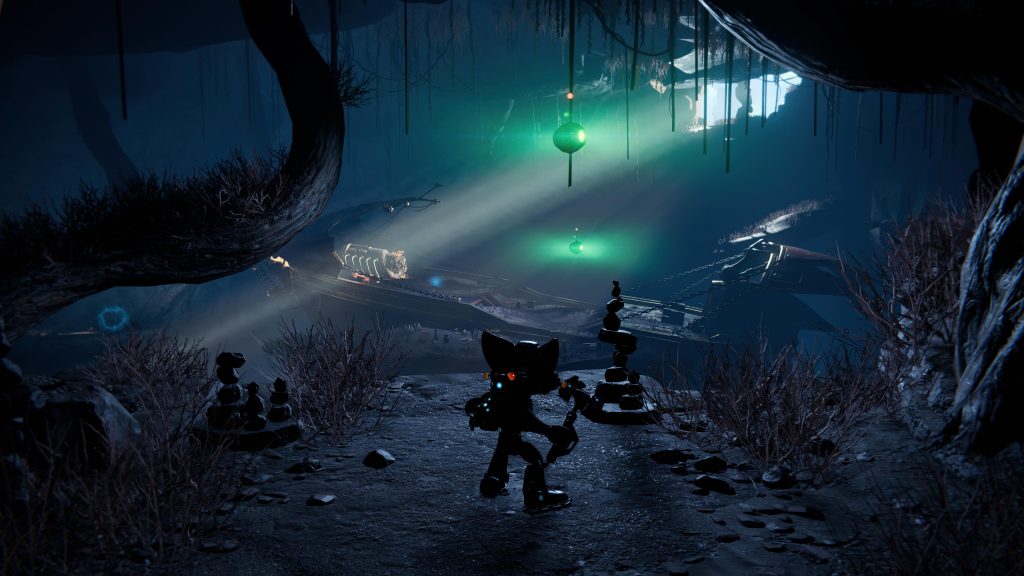 Similarly, there’s a large variety of guns to collect and upgrade by collecting bolts and raritanium crystals. The guns are as much co-stars in the game as Rivet and Kit are, ranging from the fairly prosaic laser pistol to the slightly ludicrous topiary gun where, yes, the enemies are turned into hedges. No less silly than anything from the Saints Row games at least. After a while though, once you’ve popped the trophies for weapon specific kills, you’ll stick with favourites. In our case the lightning gun proved irresistible.

Combat feels largely uninspired with boss fights in particular lacking in any real variety, meaning that once you’ve got one boss downpat, the others won’t tax you too much. Make no bones, the enemies are generally there to yield bolts that let you unlock more weapons. They feel a bit secondary to the plot anyway. 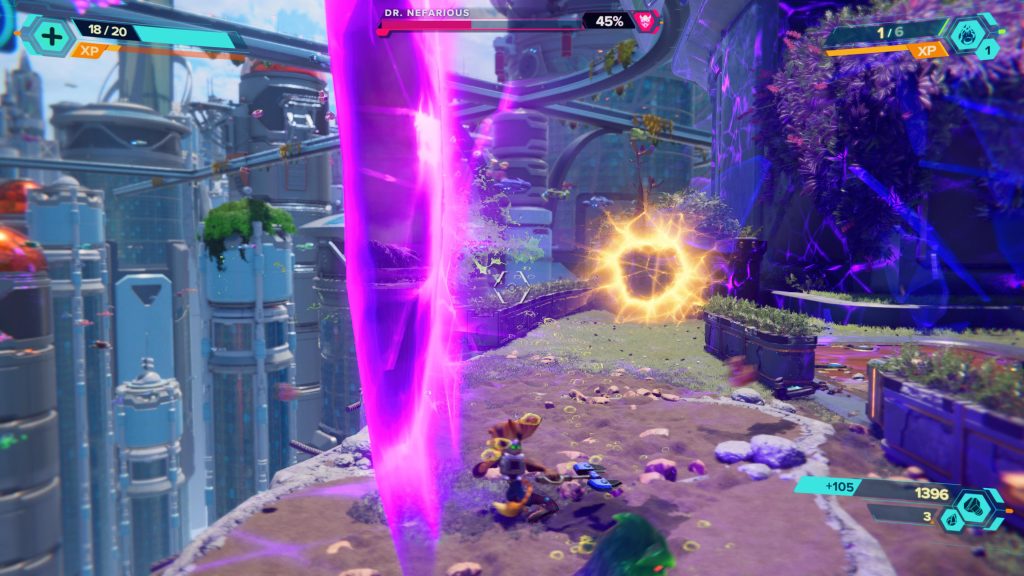 You might remember the PS5 reveal this time last year made a big thing of the rift mechanic. Or at least it appeared to. Any hopes of a dimension switching mechanic as in that standout Titanfall 2 level are limited to just the two levels here, with temporal ‘Blizon’ crystals being the macguffin that jumps you between the two realities.

In practice, the rifts you encounter across levels don’t amount to much more than a twist on a grappling hook, activated by a swift tap of

. Some of them are missable and tied up to a trophy, slightly annoyingly they become unavailable after a certain point in the story and you’ll have to wait until New Game+ to finish up and get your platinum. It’s likely the only trophy you’ll miss during your playthrough anyway. 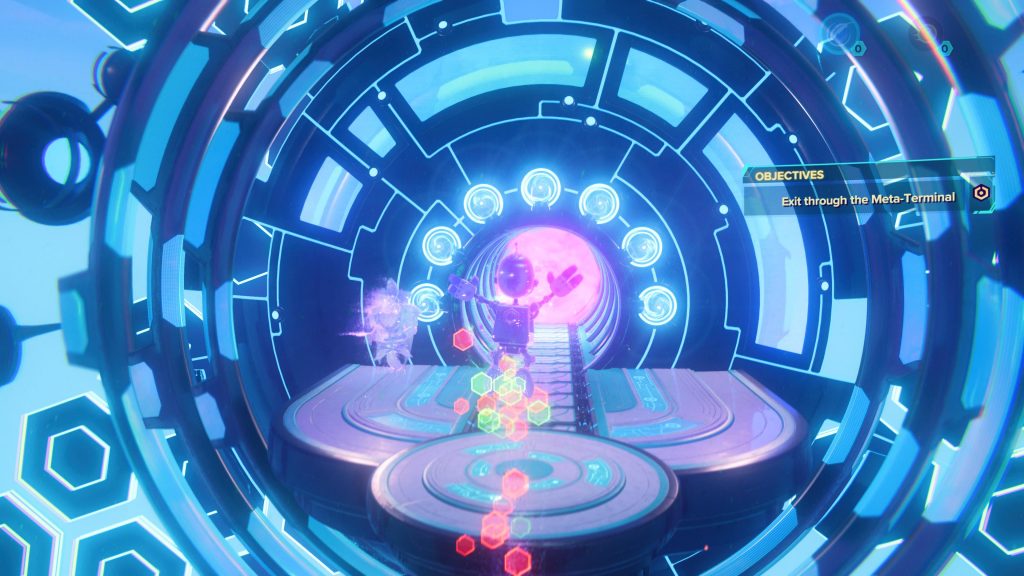 Additionally you have mini-challenges that allow you to unlock armour sets. They’re called Hidden Pocket Dimensions and brought the challenge levels in the 3D Mario games to mind. They’re not too long, but they’re a good source of extra bolts to get weapons. These are secondary to the plot and entirely optional. Not optional are the dimensional anomalies and Glitch challenges.

The anomalies are puzzle levels where you play in a sorta VR level and have to manipulate the platforms therein with orbs, guiding Clank memories in a similar manner to a 3D take on Lemmings. The Glitch challenges have you clearing out small levels of the viruses contained within,  Glitch being a cute robot who shoots the clusters of enemies after having deactivated protective shields. A virus protection program if you will. 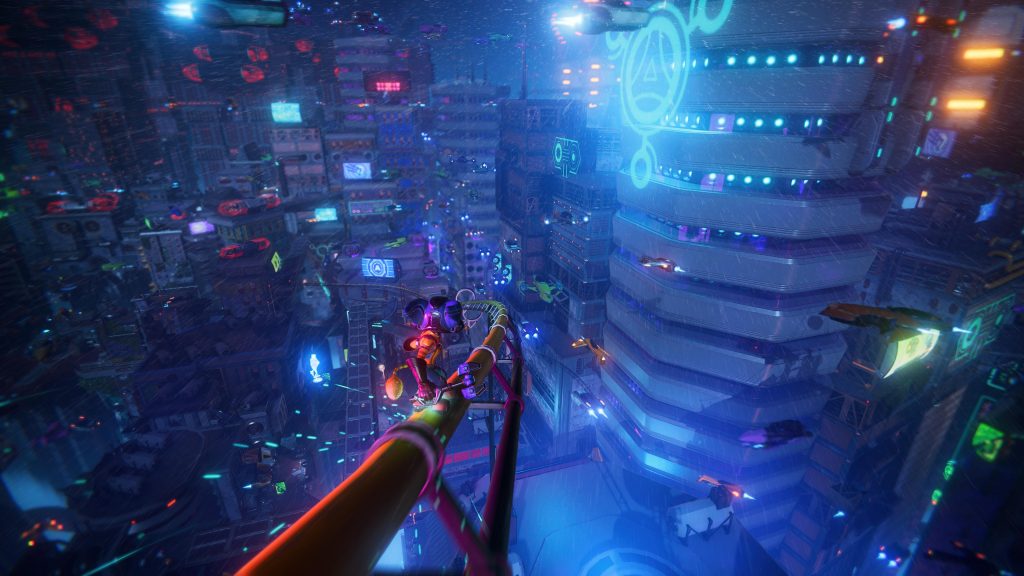 Some levels are as much about traversal as they are exploration, the grind rails being very similar to those in Insomniac’s earlier work Sunset Overdrive, one of the bonus unlockables even referring to the soft drink that turned everyone into zombies. No zombies here, just lots of hostile fauna and Dr Nefarious minions. A later level unlocks rocket boots, that very much bring to mind rollerblades in the way you control yourself.

As well as great voice acting, the music and sound effects in Rift Apart are quite spectacular, moreso if you’re wearing a decent headset. This being a firstparty game, the controller haptics are off the scale too with gunfire and seismic events imparted wonderfully. We’d expect nothing less to be honest, but it’s nice to finally have a game that makes us feel like a Dualshock 4 wouldn’t be just as effective otherwise. One unlockable weapon attained upon collecting enough spybots is made all the more amazing by the controller rumbling in time with its charging cycle. 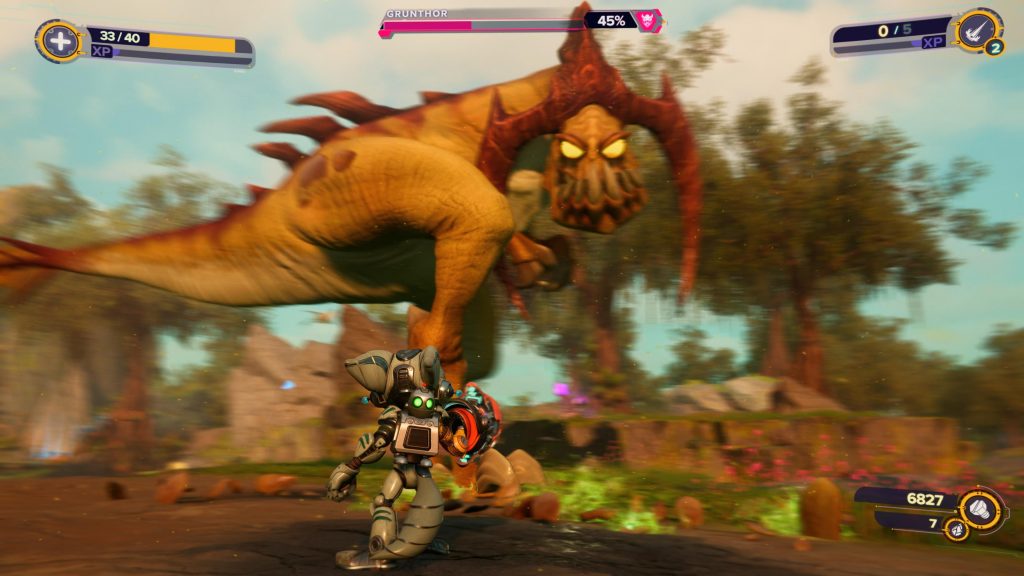 Regards the collectibles, they’re quite low-key. The golden bolts unlock silly little extras for the most part and they’re by no means essential. One collectible from a secondary quest gives you a nice bit of extra lore,  but annoyingly the audio logs don’t continue playing if you don’t stick around in the sub-menu to hear them out. It’s a rare UI misstep. There’s teddy bears scattered across the levels too, but we’d recommend not hunting too hard until you unlock the treasure finder on a later level. This  then highlights all collectibles on the minimap.

Ultimately, Ratchet & Clank: Rift Apart somehow feels a little like a Michael Bay film in video game form. It’s all explosions, excessive lens flare and mad set pieces, the scale of which are unprecedented on a home console. That said, it does feel very much like its predecessors, just with a spiffy lick of paint to make everything pretty.

Does it justify its price tag? Possibly not. But it is worth playing for the sheer spectacle of it. We felt compelled to continue well beyond the time we’d usually turn in for the evening, Insomniac being a very apt developer.

Ratchet & Clank: Rift Apart
8 Overall
Pros
+ Graphically stunning
+ Amazing audio in terms of both voice acting, music and effects
+ Collectibles aren't a huge chore
+ Haptics are off the scale
Cons
- This sells for seventy pounds, but doesn't feel like a great value proposition
- Mechanically not that different to prior games in the series
- Combat is a little insipid
- Feels a bit shallow despite the high production values

Summary
Ratchet & Clank: Rift Apart is a beautiful, occasionally stunning effort from Sony first party studio Insomniac. It's a series of summer blockbusters strung together with all the bombast and spectacle of a Michael Bay film. Yes, the price is probably too high, but we'd still recommend it.